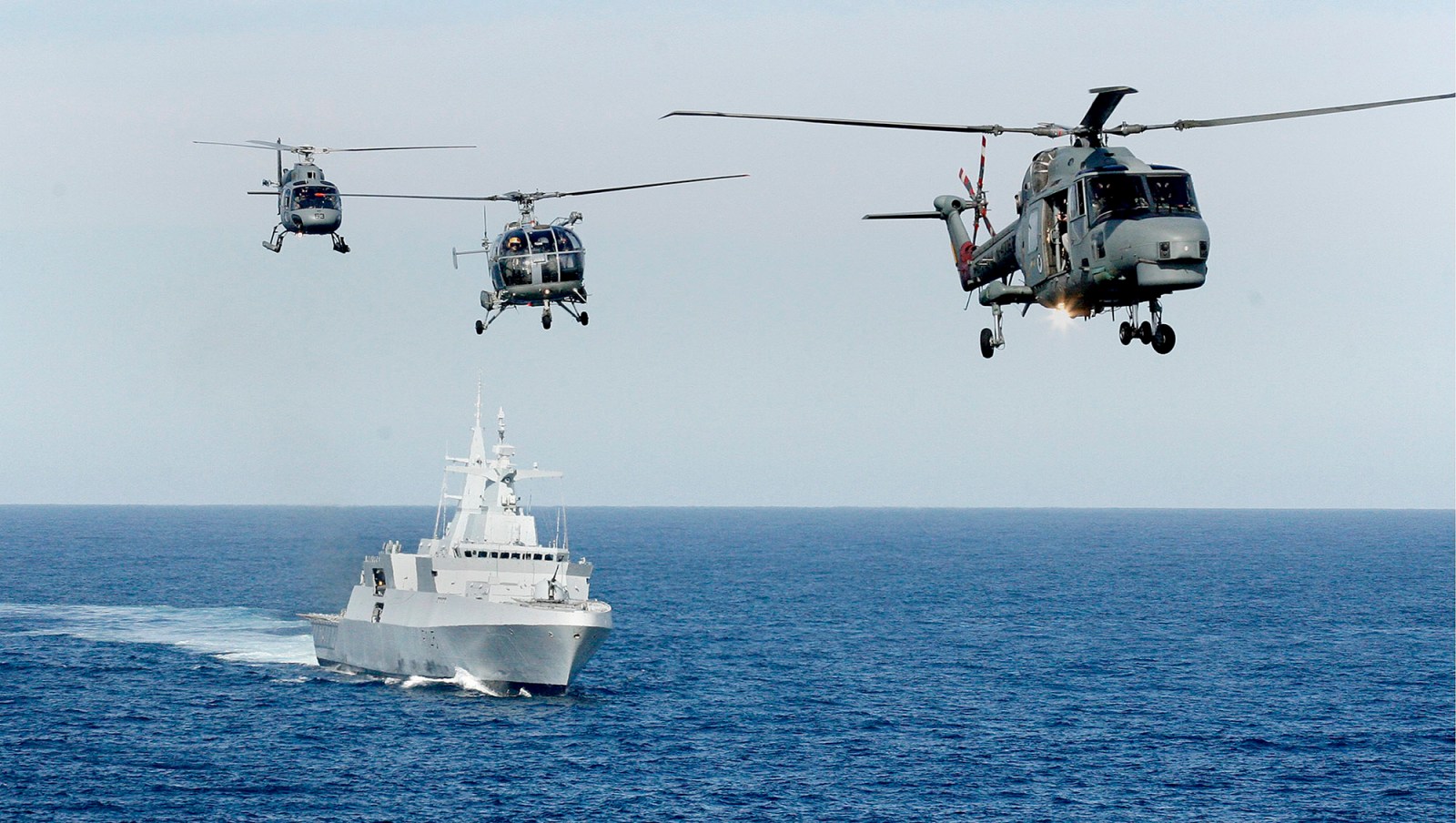 In this archive photo, Brazilian and Argentinean helicopters fly, in formation, over the South African Navy ship, the SAS Amatola in a joint navy operation off the Simons Town coastline. (Photo by Gallo Images/Foto24/Denzil Maregele)

The long-term consequences of Covid-19 will make already difficult decisions about South Africa’s maritime security even more complex. A well-managed maritime sector is key to the country’s economic recovery from the pandemic, and its long-term growth. South Africa now needs to make hard choices about how to achieve this within the constraints forced on it by Covid-19.

The process of drafting a National Maritime Security Strategy was well underway before the pandemic struck. It is coordinated by the Department of Transport, and must include contributions from over 20 departments and agencies involved in governance and enforcement at sea such as the South African Navy and the Department of Environment, Forestry and Fisheries.

The strategy aims to show how South Africa can secure its waters, where particular actors have jurisdiction and over what, and current gaps in capacity and legislation. It should also plan for integrating dispersed resources such as patrol vessels and operational budgets, to improve surveillance of the country’s coastline and waters.

Fighting Covid-19 poses new dilemmas for South Africa, in addition to the existing challenge of policing one of the largest maritime zones in Africa, which lies astride one of the world’s most significant shipping lanes. As a result of the pandemic, South Africa will, among other things, have to ensure supply chain efficiency for itself and much of Southern Africa.

South African ports have a competitive edge thanks to their relatively sophisticated transport infrastructure and high maritime connectivity to the rest of the world. Harbours such as Durban, Cape Town and Port Elizabeth are vital national and regional gateways and handle most of the region’s imports and exports.

Any reduction in supply chain efficiency caused by piracy or accidents could wreak economic havoc on the country and its neighbours. South Africa’s maritime strategy must dovetail with individual states’ plans in the region, as well as the Southern African Development Community and African Union maritime strategies. This gives South Africa’s Department of International Relations and Cooperation a significant role in shaping the strategy.

South Africa must already fulfil numerous important international safety responsibilities, such as maritime search and rescue in the case of a ship sinking, and disaster response in the case of oil spills. The rapid decline in the oil price and the pressure to achieve economies of scale mean there could soon be more oil vessels passing around the Cape. Many oil vessels are also being put into use as floating storage.

Another dilemma is the potential loss of most of South Africa’s naval capacity due to funding shortages that will make protecting its coastline and oceans difficult. The South African Navy warned last year that it wouldn’t be able to properly maintain its fleet of four frigates and three submarines by 2022/23.

The diversion of government spending towards the health and economic costs of Covid-19 will probably lead to more reductions in operational budgets for the foreseeable future. This means finding other ways to improve coastal protection as the navy won’t be able to operate far from its shores. This would represent a significant shift in priorities as some of South Africa’s strategic interests and critical areas of vulnerability lie far offshore and overseas.

South Africa’s presence in the Mozambique Channel, for example, is not simply about fighting piracy. Almost all its oil imports are shipped through the channel. Since 2011, South Africa has intermittently deployed its navy and air force here as part of Operation Copper – an anti-piracy patrol to prevent attacks on ships carrying its economically crucial cargo.

For the past two months a ship has yet to take up station in the seas off Pemba and Cabo Delgado province in Mozambique, owing to some restrictions on naval operations as part of South Africa’s Covid-19 response. Yet South Africa might need to consider sending a vessel there to help prevent violence spreading from land into the sea lanes in the Mozambique Channel.

This is because worsening violence in the Cabo Delgado province could delay the opening up, extraction and export of natural gas from Mozambique. South African banks such as Standard Bank and global energy conglomerates such as Total SA are investing billions of US dollars into developing this industry, yet its very existence is imperilled by the ongoing violence.

South Africa is likely to become increasingly dependent on these gas fields for its energy security. Transnet is planning a multimillion-dollar liquefied natural gas storage and regasification terminal at Richards Bay port. The terminal is scheduled to begin operating by 2024 – around the same time that Sasol expects to face supply constraints at its maturing Temane and Pande fields. These new natural gas imports are supposed to more than make up for the future unavailability of existing deposits.

The dilemmas of how to provide adequate offshore patrolling are unlikely to be resolved by increased defence expenditure alone. The debt from fighting Covid-19 is likely to constrain South Africa’s spending on maritime security, probably through freezing any further large capital acquisitions.

The National Maritime Security Strategy must show how maritime security isn’t just another burden on South Africa’s economy. According to the Medium Term Strategic Framework 2019-2024, South Africa intends to conduct four coastal patrols annually and for the proposed Border Management Authority to perform a coast guard role. The maritime strategy needs to clarify whether this can still be achieved, and if so how.

The challenges of dealing with Covid-19 in the year that a new maritime strategy was to be finalised presents a Catch-22 for those involved. The strategy process shouldn’t be rushed.

The means must be found to deliver an effective and secure maritime sector, which could in turn anchor South Africa’s economic recovery and future growth. Work must begin now to craft the best possible maritime strategy for the country. DM