Betting on the banks during Covid-19

By Dewald van Rensburg for amaBhungane• 5 May 2020 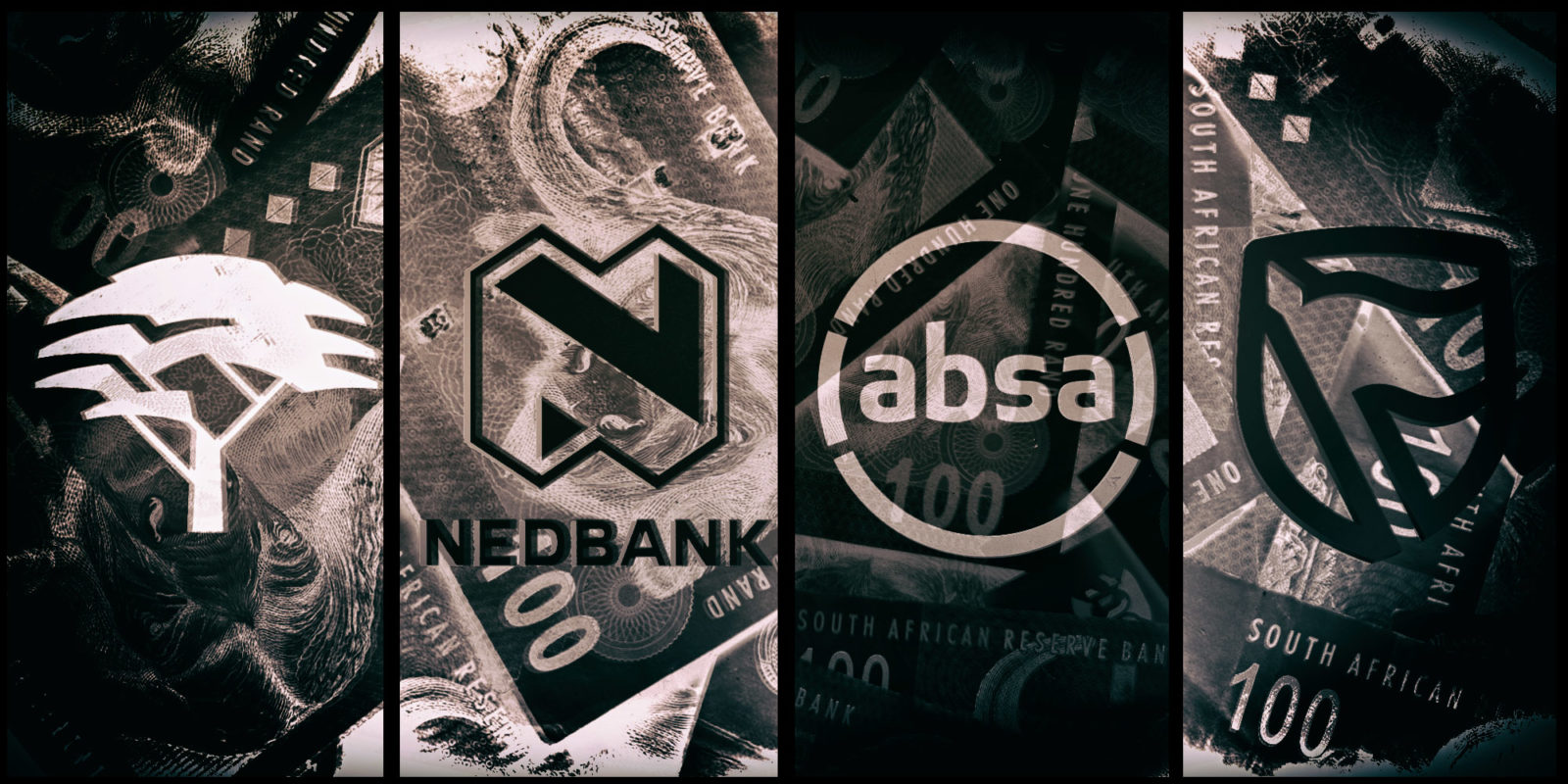 Government’s major stimulus measures rely on the financial sector – banks in particular – to support real economic activity in exchange for unprecedented (temporary) deregulation and other support. How’s that working out so far?

Government has appealed to the financial sector to adopt a “spirit of solidarity” to combat the crippling economic effects of the Covid-19 lockdown. An amount of R800-billion has been bandied about as the total value of South Africa’s economic stimulus, but most of that figure relies on banks playing ball.

The South African Reserve Bank (SARB) has gone on an all-out drive to get more credit into the system by cutting interest rates to record lows and temporarily relaxing regulations that constrain bank lending from getting out of hand in normal times.

The regulatory concessions will, hopefully, lead to an infusion of credit during and after the shutdown, which started in March 2020 and has resulted in the closure of businesses and mass job losses.

The SARB has estimated that its two main regulatory interventions could lead to R540-billion in new lending from banks.

Dovetailing with the SARB’s regulatory concessions is a R200-billion loan guarantee scheme – the single largest part of Finance Minister Tito Mboweni’s fiscal measures – that banks can tap into to give out special “Covid-19 loans” to “small” companies (revenues under R300-million).

For these loans, banks will charge the prime rate, conventionally three percentage points more than the SARB’s repo rate. It currently amounts to 7.25% and will probably drop further. Also, repayments on the Covid-19 loans don’t need to start until six months later.

That’s a lot of credit. In fact, the R540-billion is more than the total loans banks usually make in a normal year, according to the National Credit Regulator (NCR) – hence the call, made by the Prudential Authority (PA) on 6 April 2020, for banks to stop paying dividends and bonuses, and to rather conserve capital for lending to the real economy.

It is a non-binding request, but the powers that be unambiguously expect banks to toe the line. Major central banks, like the Bank of England, have done the same to their banking sectors.

“The PA expects that the banks will conserve capital and will not pay dividends or bonuses to senior executives,” the regulator said in response to questions from amaBhungane.

The PA was too late.

In the past two weeks, South Africa’s major banks paid out dividends that are almost equal to the largest stimulus measure the SARB has devised.

FirstRand, owner of FNB, already paid out R8,189,852,481 on 6 April. The group encompasses more than the bank, but FNB is the bulk of the business.

Compare that to the larger of the two main regulatory interventions the SARB has made: Cutting the capital requirements for banks to eliminate so-called Pillar 2A capital. This move is meant to free up R30-billion. This translates into a theoretical surge in new lending of R300-billion, the PA has said.

The banks correctly say their hands were tied regarding the dividends. All of them had declared their payouts before the State of National Disaster was declared. More importantly, they declared dividends before 6 April 2020, when the PA sent out G4/2020, the guidance note “requesting” that they stop all dividends and bonuses.

The Companies Act prohibits a company from cancelling outright a dividend that it has declared. It does, however, allow a company to alter the dividend within a brief period of time (to reduce it or suspend it), if economic conditions implode to such an extent that the dividend suddenly threatens the survival of the company. Restaurant group Spur Corporation recently did exactly that.

Absa and Nedbank were technically still able to do that when the PA asked them to stop payouts, but they were quick to point out that the condition of severe financial distress like Spur’s does not apply. It would have been illegal for them to stop or drop their dividends.

Bonuses were likewise paid in March 2020, before the PA asked for them to stop.

“It should be noted that it was not the expectation of the Prudential Authority for banks to contravene the Companies Act with regard to the payment of dividends that had already been declared before the issuance of Guidance Note 4/2020,” the PA told amaBhungane by email.

Nedbank declared its dividend on 2 March 2020. Standard Bank did so on 5 March and Absa followed on 11 March. The next day, 12 March, the World Health Organisation declared Covid-19 a global pandemic.

Both Absa and Nedbank proffered that they had asked their lawyers if they were able to stop their dividends and that the answer was an unambiguous “no”.

“Absa sought legal advice in the matter, given that Absa had already declared the dividend and potentially faced legal action from shareholders who had been promised the dividend payment,” Absa said in response to questions from amaBhungane.

“Legal opinion stated Absa was legally obliged to pay the dividend as it had been declared and communicated to shareholders [which includes pensioners, many of whom depend on dividends as a source of income]. We had consulted with the authority, prior and subsequent to the PA advisory note being issued.”

Nedbank said that its own R3.5-billion dividend was, in reality, almost insignificant compared to the bank’s existing equity and liquidity of R98-billion and R149-billion, respectively.

“The payment of a dividend will not have a material impact [on] the capacity to support clients.”

The banks also defended the declaration of dividends in the first place, saying there was no indication that the Covid-19 pandemic would explode the way it did at the time.

Nedbank declared its dividend on 2 March 2020. Standard Bank did so on 5 March and Absa followed on 11 March. The next day, 12 March, the World Health Organisation declared Covid-19 a global pandemic.

“At the time of declaring the dividend, there were no cases in South Africa, as well as no clarity on the impact that it may have had,” said Standard Bank.

“Despite the early stages of the virus outbreak, no one knew the extent of its impact,” said Nedbank.

The SARB’s interventions could, in theory, significantly increase lending, but it is up to each bank to balance the new headroom to lend with the inevitable reversal of the deregulation that the central bank has committed to.

The PA’s estimate of how much lending power will be summoned up by the R30-billion Pillar 2A capital elimination seems slightly optimistic.

Standard Bank indicated a less powerful effect. It told amaBhungane that the measure could free up to R6.7-billion on its side, which would translate into “potentially … R42-billion of unsecured lending”. If you scale that ratio up R30-billion, it gives you about R188-billion in lending power, not R300-billion.

The PA made another major intervention by lowering the so-called liquidity coverage ratio. That’s the amount of money a bank needs to keep at hand to cover the estimated outflows of cash over the next 30 days. It is normally 100%. Now, it is 80%.

The PA thinks that could lead (theoretically) to another R240-billion in lending, which would hopefully go to the real economy of manufacturers and households, and not the financial economy of speculation and asset inflation.

The NCR says the banks extended about R439-billion in credit in 2019, so the authorities are hoping to squeeze out the equivalent of an entire year’s normal lending on top of whatever the banks would lend out under the current abnormal circumstances.

A banking industry source has pointed out that South Africa’s banks and other moneylenders, like their counterparts all over the world, will soon face a tidal wave of Covid-19-related defaults. Payment holidays abound, but those only help people and businesses that come out of the lockdown with their income fully restored and the ability to make up for what was lost. Either that or they will immediately make a massive amount of new debt to pay the old debt.

Everything from mortgages to small business loans could rapidly transform into toxic assets. What happens to the microfinance industry, which is not known for treating defaulters kindly? The government will almost certainly have to intervene in yet another unheard-of round of stimulus/bailout somewhere down the road.

Data from the NCR indicates a serious microcredit problem was already brewing before anyone had heard of Covid-19. In its last quarterly credit consumer report, the NCR’s data showed a massive spike in past-due short-term debt up to the end of 2019. It had gone from 8.35% in 2017 to 22% of the R2.4-billion book of formal registered purveyors of month-to-month debt.

The main intervention the PA has thus far made to head off this problem is to relax the conditions under which a loan has to be considered “distressed” during the Covid-19 crisis. The point of this was to allow credit providers to restructure loans with three-month repayment holidays and longer terms, without any consequences.

Various permutations of payment holidays are now offered by all the banks and other credit providers, as well as insurers.

The terms and apparent generosity of the various holiday schemes differ from bank to bank, but all have the common feature that they will extend the term over which a loan is repaid while charging the additional interest and fees for the three months’ non-payment.

All things being equal, the banks make more money out of each loan. Standard Bank has argued in its response to questions that any additional fee and interest income it may be getting is counteracted by, among other things, the opportunity cost of having less cash to use for new loans.

“To the extent increased client interest is realised from an extension granted, this is largely neutralised by the additional funding, reserving and capital costs the bank incurs. The intention behind the restructuring support provided to the customer is to assist and ensure the long-term sustainability of the business despite experiencing short-term income constraints; it is not driven by a profit motive.

“Through the extension of the payment holiday, the bank is limited in redeploying those resources (funding or capital) to the remainder of the customer base and incurs an opportunity loss from other business that it could have undertaken had it had access to those resources.”

In the days before Covid-19, South Africa’s financial authorities would always point to the country’s “sophisticated, deep and liquid” capital market as its badge of honour – the thing that distinguishes us from lesser emerging economies.

It is the underpinning of the gleaming towers of Sandton which mostly house financial services firms and their lawyers. This market will now be put to the test. DM