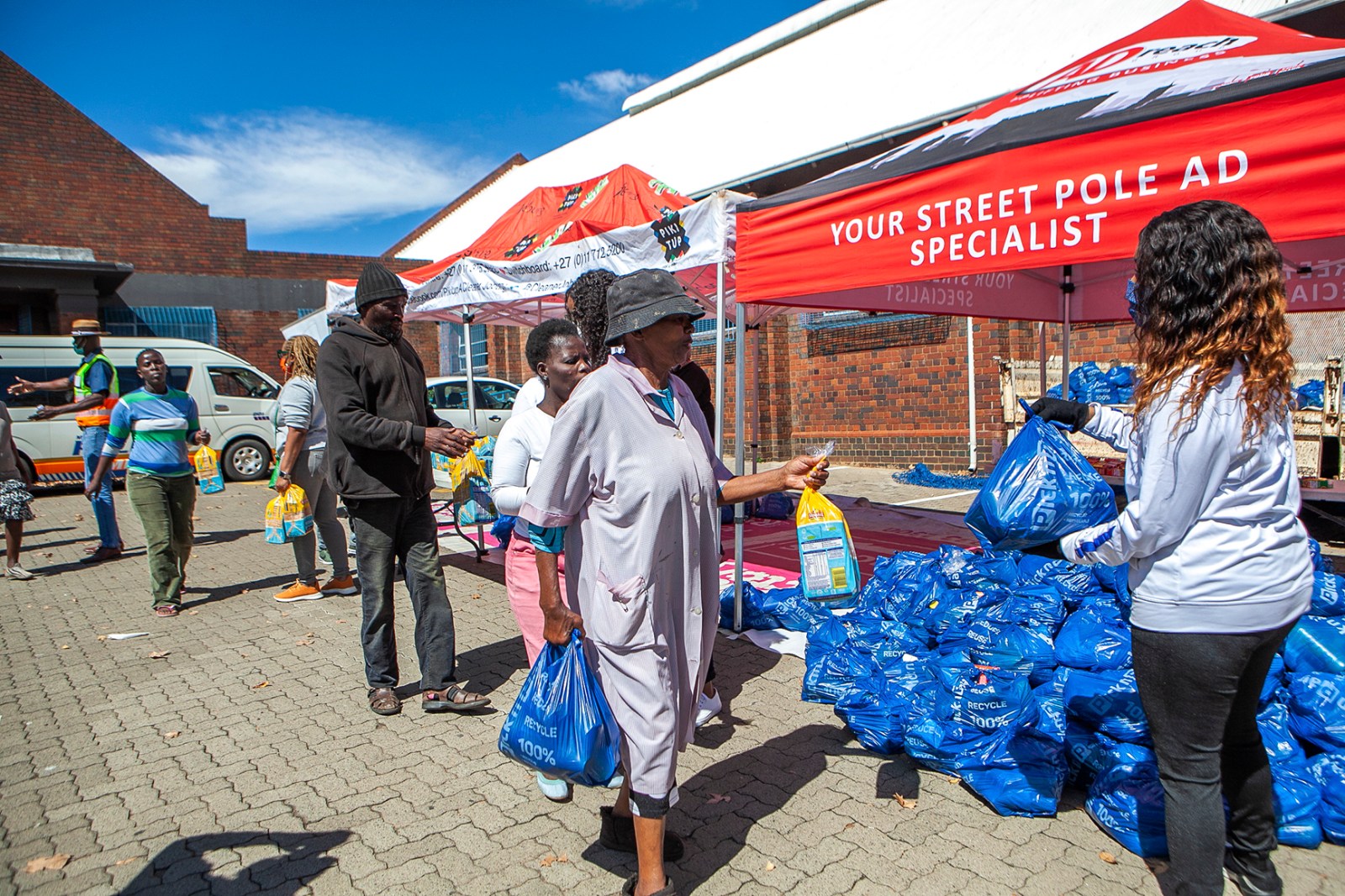 Orlando Waste Pickers receive food parcels at the Orlando Community Hall on April 17, 2020 in Soweto, South Africa. It is reported that City of Johannesburg has taken on the responsibility of ensuring that waste pickers have food. The decision comes after an application by Lawyers for Human Rights to have waste pickers declared an essential service was turned down by the Gauteng High Court. (Photo: Gallo Images/Sharon Seretlo)

The Solidarity Fund created to assist in South Africa’s response to the outbreak of coronavirus has reached R2.6bn in pledges, procured millions of rand in medical equipment and protective gear, but admit that they were overwhelmed by the sheer number of calls for assistance to help address the growing hunger problem in the country.

The first 20,000 of a promised 250,000 food parcels have been distributed by the Solidarity Fund after officials were “overwhelmed” by requests for assistance.

Nicola Galombik, who is heading up the humanitarian response of the fund, said they were overwhelmed by requests for assistance with food.

“These are extreme, difficult times,” she said. She said their immediate response to the food crisis was to make food parcels available to most vulnerable communities. The plan, she explained, was to provide emergency relief to 250,000 families before the end of April.

“Our goal is to act rapidly and to reach people facing severe food crises,” she said.

She said they were partnered with several organisations with 25% of their distribution being handled by the Department of Social Development and their implementing agents, 50% by four large NGOs, Islamic Aid, Africa Tikkun, Food Forward and the Lunchbox Fund and 25% by small community organisations.

“We have made a deliberate effort to find communities who are underserved. The most important thing is to ensure that the food reaches the right people.”

She said they wanted to make sure that as much value as possible goes to beneficiaries and not to organisations doing the distribution.

“We are making allocations across all provinces,” she said, adding that they have mapped the wards with the highest levels of poverty.

Galombik emphasised that there will be active and robust monitoring of the fund’s food distribution with daily progress reports.

“We really only got off the ground this week with 20,000 parcels delivered across five of the provinces. But the remaining ramp-up will happen very fast. We hope the rest of the parcels will reach all households by the end of April,” she said.

She added that they are working on a voucher option for the last phase of response.

The creation of the fund was announced by President Cyril Ramaphosa in mid-March when he declared the outbreak of coronavirus infections in the country to be a national disaster.

The fund’s chairperson, businesswoman Gloria Serobe, said it was inspiring to see what determination, collaboration and innovation can achieve in a short time.

“We are pleased to report that tens of thousands of companies have responded to [the president’s] call: R2.6-billion has been pledged to the Solidarity Fund by companies, both big and small, foundations, charitable institutions and individuals.

She said the fund has been registered as a public benefit organisation (PBO), a board was set up and mandates were formulated all within the past month. “We have received several pro bono offers of time and skills,” she said.

She said the fund’s efforts were separate and independent and it was a “fund for all of South Africa”.

She also stressed that several anti-corruption measures were set up to prevent the abuse of funds.

Nomkhita Nqweni, who was appointed as the interim CEO for the fund, said the main objectives were to support the national health response, contribute to the humanitarian effort and to mobilise South Africans to drive a united response.

“We are indeed unique,” she said. “The Solidarity Fund has created a single platform to bring together all their resources for an immediate response,” she said.

She added that the aim was to create an independent and agile organisation.

“Against the scale of the challenges we face,” she said, “this is a drop in the ocean.”

She further explained that an early win for the fund was the creation of a public awareness campaign on what people can do to stop infections from spreading.

She said their campaign, created by agencies which offered their time and skills, are now flighting on all media platforms in all 11 official languages including on 15 radio stations.

“We have worked with creative agencies and media owners and organisations who donated booking slots and billboard platforms to flight this campaign. We will continue to re-evaluate its messages to ensure that it remains relevant and impactful,” she said.

She said the Solidarity Fund’s website will be relaunched this weekend to become a central portal with detailed information on pledges received, resources and a transparent tracking mechanism to show the fund’s impact.

“We welcome constant engagement on how to improve,” she said.

The Solidarity Fund’s fundraiser, Paul Bondi, said they have received an unprecedented response from all South Africans.

“Everyone is getting involved,” he said. Bondi explained that the fund was launched with R150-million from government and now stands at R2.6-billion.

He said that so far, apart from organisations, 75,000 individuals have contributed amounts ranging from R2 to well over R1-million.

Discovery CEO Jonny Broomberg, who heads up the health interventions on behalf of the fund, said the fund should be seen as a rapid response vehicle. He said R1.1-billion in funding has been allocated for an urgent response to the health sector’s needs and these are currently focused on the purchase of personal protection equipment (PPE) as well as other critical equipment like test kits and ventilators.

“Globally there is a shortage of PPE. The whole world is competing for these items,” he said.

So far, he added, they have managed to procure gloves, masks, shields, respirators like N95 masks and goggles.

“It has been a very complex process. You have to work with very detailed, technical specifications as different types of health workers need different levels of PPE. We had to verify and validate suppliers and quality and also get involved in price negotiations,” he said.

He said the fund was using a procurement engine set up by Business for SA.

Broomberg announced that in the first week they have managed to procure R100-million in safety equipment with another R420-million order on its way and another R192-million order being processed.

These include 21 million masks and hundreds of thousands of hand sanitisers, goggles and gloves.

“Some have already arrived. Others will be arriving in a week or two. We checked for quality and we are confident that these will meet true global standards,” he said.

He added that the Fund was also procuring 400,000 test kits on behalf of the National Health Laboratory Services and 200 ventilators that will be on their way to South Africa very soon.

He said they will welcome the production of any PPE locally.

“We are fortunate that we could learn from countries ahead of us. Tracking, tracing and testing is critical. By acting as quickly as we have, we can make a positive difference,” he said.

Broomberg added that a web portal had been set up for suppliers and more than 4,000 businesses have been registered in the past month.

“I am hoping that global supply constraints will ease in next few weeks,” he said. “We will publish the prices and the cost of logistics. The cost of air freight is astronomical. Sea freight is cheaper., but a lot of PPE had to be brought in by plane as we urgently needed it,” he said. DM/MC