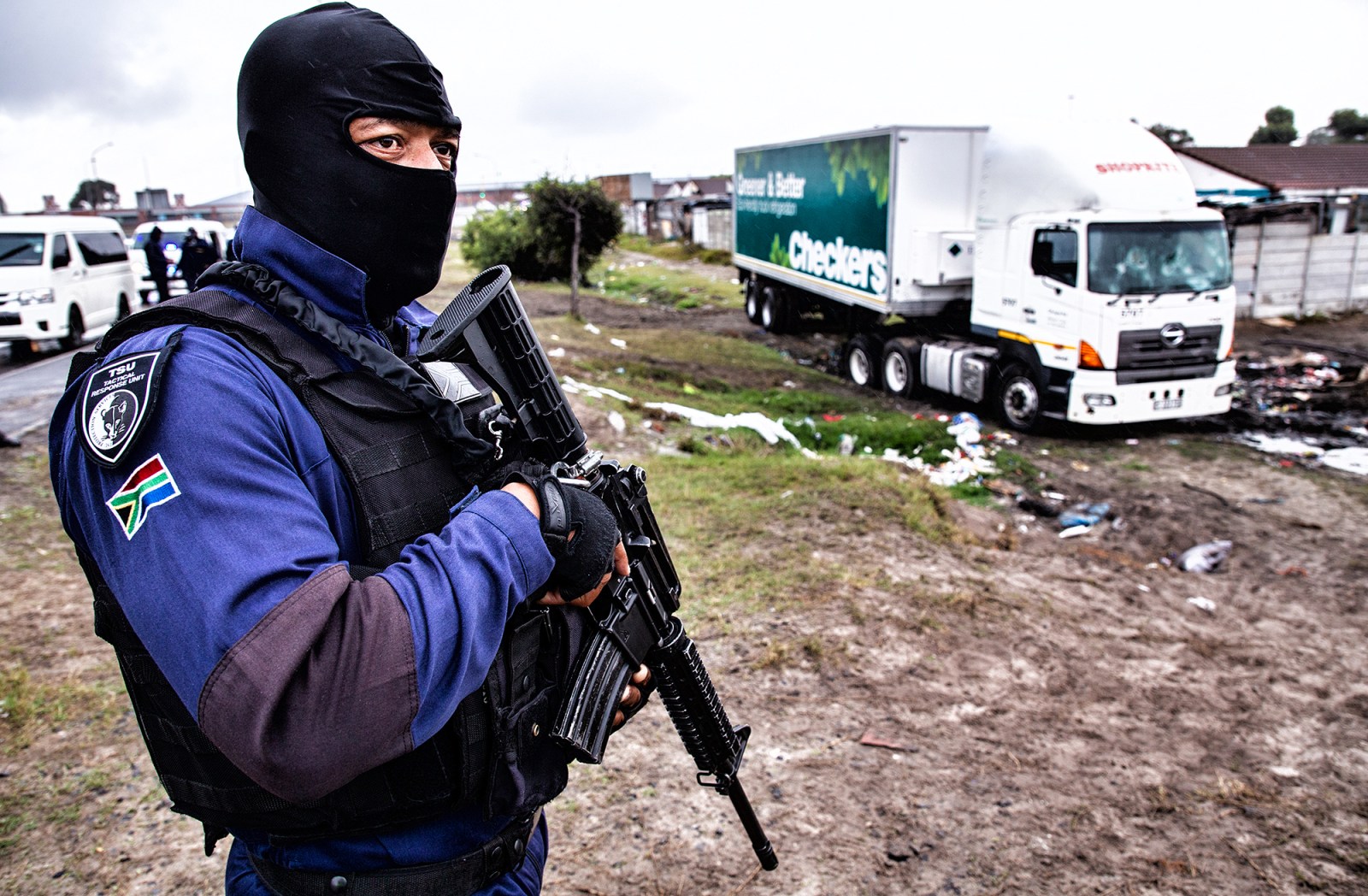 A general view of a looted damaged Checkers supermarket truck in Bonteheuwel as security officers from TSU Protection Services secure the scene on Day 25 of the National Lockdown on April 20, 2020 in Cape Town, South Africa. Only essential services are allowed on the roads. (Photo by Gallo Images/Roger Sedres)

Close to 10,000 people from Delft, outside Cape Town, including children, could be left without food if the looting of trucks carrying food parcels is not stopped.

For the second day in a row, police resources in the Western Cape were stretched to the limit as call-outs were received about the planned looting of food trucks and supermarkets.

Farieda Ryklief, director of Woman Impacting a Nation (WIN), expressed fears that the looting could have an impact on feeding schemes in the area, especially Delft. Ryklief and volunteers have been handing out food to Delft residents since the start of the lockdown.

“We only have enough food until Friday to feed people. Yesterday we fed more than 1,200 people. The donors have already indicated that because of the continued looting of their trucks, they won’t be able to deliver food to feeding organisations and even to some spaza shops in our area. If the looting doesn’t stop then we won’t be able to feed the thousands of hungry stomachs,” Ryklief said.

Chaos erupted on Tuesday, 21 April on the R300 as roads were barricaded with rocks and burning tyres. Truck drivers slowing down while approaching the hindrance found themselves trapped in a hail of stones. Police and metro police attending to the matter were also targeted.

In response, rubber bullets were fired and protesters fled into areas adjacent to the R300 with the police in hot pursuit.

Police spokesperson Novela Potelwa said Delft police responded to an incident at around 11.30am when about 50 people stormed a supermarket and made off with groceries worth R4,000.

“Tracing operations are still underway to track the perpetrators. Yesterday’s incident in Delft was preceded by three other incidents in Keurboom Street and on Delft Main Road where shops were looted. Five suspects between the ages of 26 and 31 were arrested,” she said.

Responding to the wave of food-related crimes in Delft, Candice van Rheede, head of the Western Cape Missing Persons Unit (WCMPU), said the situation was “very scary” and dropping meals at needy homes had become treacherous.

Local pastor Charles George, who has been involved in giving food to more than 2,000 people in the area, cautioned that food wars were looming if the government did not step in to assist the vulnerable.

Meanwhile, in Elsies River, community members stormed Shoprite in Halt River road and stole items valued at R3,000. Elsies River police responded to the incident and arrested four people aged between 32 and 43 on charges of theft.

Police also thwarted an attempted break-in at a closed butchery in the area.

In Vredenburg, on the West Coast, a group of between 300 and 400 residents hurled stones at the police. The crowd threatened to storm a spaza shop and attempted to attack the house of a councillor. Four suspects were arrested on charges of public violence.

Eric Ntabazalila, NPA spokesperson in the Western Cape, said the four people arrested earlier this week had appeared in the Bishop Lavis Magistrate’s Court charged with the looting of a food truck, contravening Disaster Management Act Regulations, public violence and robbery with aggravating circumstances. The matter was postponed to May 12 for a bail application.

“While I fully understand the stress and pressure many of our residents are facing as a result of the national government Covid-19 lockdown, resorting to violence and breaking the law is never the answer,” Plato said.

He called on law-abiding residents to report anyone involved in the increasing incidents of “lawlessness and looting taking place in some communities”.

He reiterated that with regard to emergency food provision, President Cyril Ramaphosa had made it clear that the national government was aware of the dire need faced by many families and had put provisions in place to relieve some of the pressure, including the temporary increase in social grants.

Plato added that the national Department of Social Development through the South African Social Security Agency (Sassa) remained the primary stakeholder when it comes to food distribution. People can contact Sassa on 0800 60-10-11 or 021 469-0235 for more information. DM