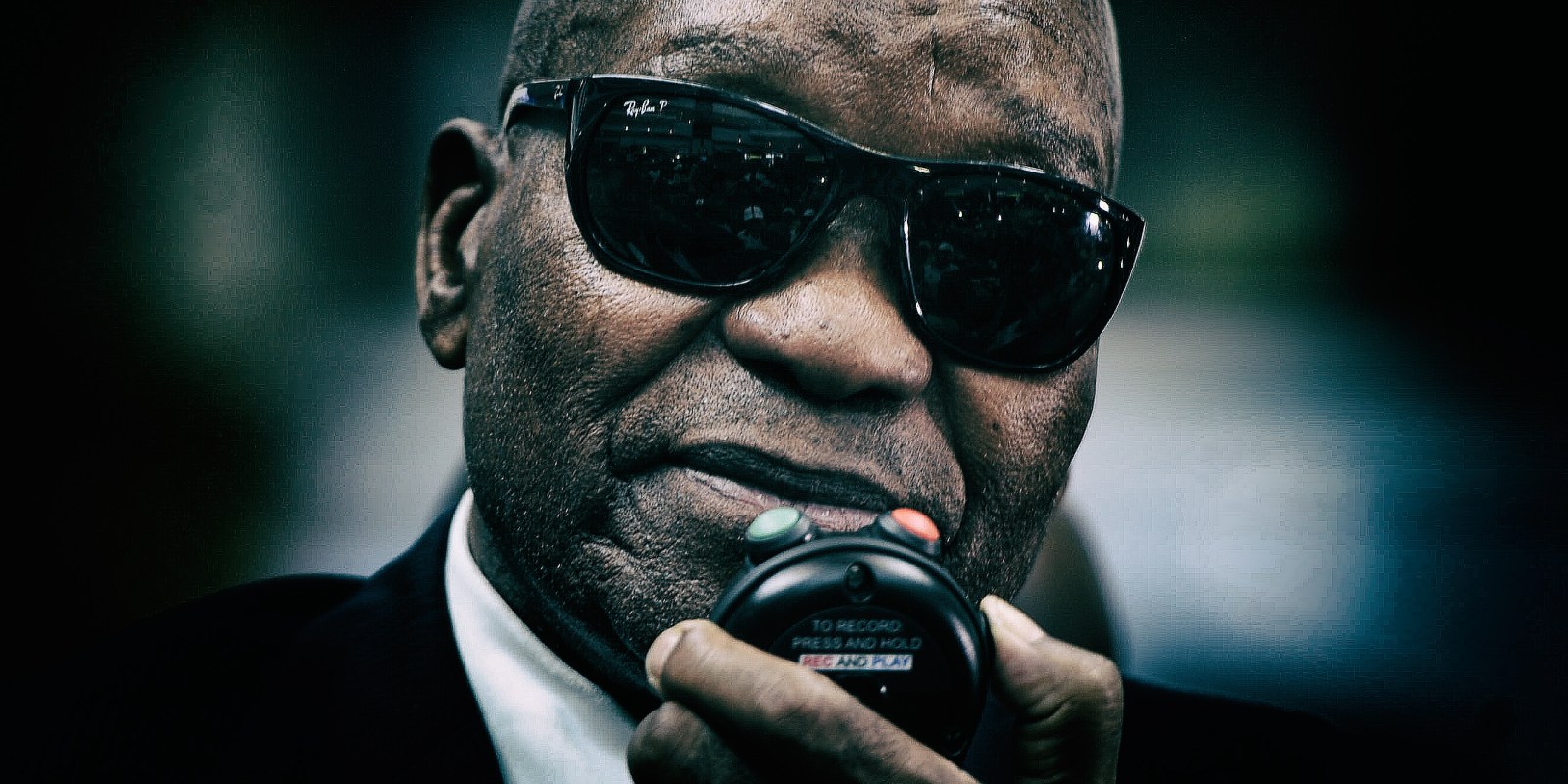 All indications point to Jacob Zuma finally preparing to face trial, and perhaps setting up some kind of race-baiting spectacle. However, in a Covid-19 world, any political theatre he had planned is likely to fall flat on its face.

It has generally been assumed – up until now – that former president Jacob Zuma had always wanted to avoid standing trial for personally benefiting from the 1990s Arms Deal. He managed, through the power of the presidency and the unlimited cash he could spend on legal fees, to delay his day in court for more than 15 years. Now, in another twist, his foundation says he wants the case against him to go ahead so that he can clear his name.

He has also now fired one attorney and hired another who has some experience of political and legal processes. This may mean that he is finally preparing to face a courtroom. It could also be that Zuma believes the time is right for a legal spectacle to occur.

On Sunday, the JG Zuma Foundation released a statement saying that Zuma was now preparing for the trial of his life. It also confirmed that his attorney for the last stages of the criminal proceedings against him, Daniel Mantsha, will no longer be representing the former president, and that Eric Mabuza will be taking over. However, advocate Muzi Sikhakhane will continue as the lead advocate in the case.

The context of this is important.

Mantsha was appointed chairman of Denel in 2015 when Zuma was the president of South Africa. That came after Mantsha had been previously struck off the roll of attorneys. He resigned from Denel with immediate effect just hours after President Cyril Ramaphosa appointed Pravin Gordhan Minister of Public Enterprises. 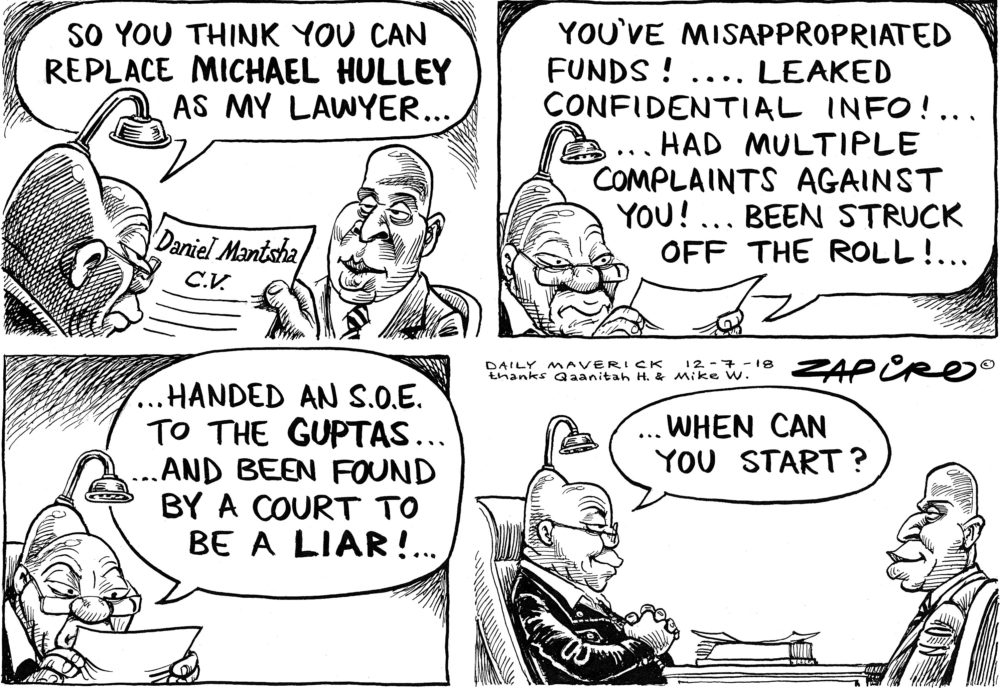 Presumably, he knows and understands quite a bit about the State Capture project, and has a relationship with Zuma that goes beyond a normal client/attorney relationship.

Last week, Business Day reported that Zuma’s legal team had filed papers in the Constitutional Court in which they asked for leave to appeal an earlier Supreme Court of Appeal ruling confirming a ruling in the Pietermaritzburg High Court. Essentially, Zuma was asking the Constitutional Court to find that he had not been treated properly by the National Prosecuting Authority and that the delay in his matter meant he could not get a fair trial.

Of course, anyone who has followed this saga from the moment Schabir Shaik was convicted in 2005 for bribing the future president would be aware of how Zuma himself is surely responsible for the delays.

A brief history: the NPA’s then-acting head Mokotedi Mpshe stopped the case from proceeding days before the 2009 elections; the DA tried to have that decision reviewed; Zuma used his apparent control of the NPA to stop evidence from being given to them; he appealed every ruling until eventually charges were lodged against him in March 2018; he then applied to have that decision reversed. His appeal here was the final step in that process.

In those papers filed last week, Zuma said that the only reason he had not testified in defence of Shaik (whom he had always described as his friend and comrade) was that he was not granted immunity, and thus it would have been “ill-conceived and highly risky” for him to take the stand and testify under oath.

This appeared to be a massive concession that Zuma does indeed have a case to answer. Up until now, he has always said that he has not, and did nothing wrong in his relationship with Shaik.

However, as a legal strategy, it does not appear to make sense. Why would Zuma suddenly change tack now? It certainly led to questions as to what was happening within Zuma’s legal team.

It now appears that we have our answer: Mantsha has been fired, and Mabuza is taking over. However, Zuma must have signed those documents filed at the Constitutional Court in an affidavit, and they could be used against him in court.

This may mean that Zuma is now moving into the next phase.

Mabuza recently represented the former SARS commissioner Tom Moyane, and has experience in high-profile cases. He is comfortable in the media space and is able to make his client’s case well in what will be treacherous political terrain. His experience in the Moyane matter may also help, in that he is clearly aware of much of the back-story involving his former and current client.

However, it seems unlikely that Zuma’s interests have changed during this time. He must still want to avoid conviction. And while there may have been missteps involving his legal team, he now needs to prepare for what could follow.

It seems unlikely in the extreme that it would be in his interests for the State to be able to lead evidence against him in open court. Shaik was convicted (in a decision upheld by the SCA and the Constitutional Court) of bribing Zuma. The bank records showed, and will still show, that Zuma’s accounts received the money. It would be hard to see how Zuma can now not be convicted of receiving that money as a bribe.

However, it may be that a much more interesting plan is now coming together.

Zuma has previously said he had to go to Cuba for medical treatment and upon his return home he was wearing sunglasses when met by supporters. Already he has missed a court date, while the sick note that his legal team provided was rejected by a judge. That event led to claims that the court was biased against him.

On Sunday, an organisation that claims to support Zuma, the “RET Champion” group, said that it welcomes the start of his trial, and that he is being “persecuted today for his unapologetic anti-white supremacy and pro-black leadership style”.

This suggests that there may be a spectacle planned, involving accusations based on race, bias, and novel understandings of the law. Zuma may well be trying to, once again, claim he is a victim of some kind of “deep state” or “WMC” interests.

Amid this, it’s entirely possible that he will try to tarnish Cyril Ramaphosa too. However, this may now be more difficult than ever before.

Up until now, public attention has worked in Zuma’s favour. His court appearances before and after the ANC’s Polokwane Conference in 2007 were used to generate huge attention and provided a useful focal point on his supposed plight.

He, and the machinery of the ANC at the time, were able to get thousands of people to attend his cases. Important political action occurred during these events. Just minutes after the Nicholson judgment in 2008 which found that Zuma was the victim of a “political conspiracy”, the then-ANC Youth League leader Julius Malema uttered the phrase, “Bye-bye Mbeki, bye-bye.” Thabo Mbeki resigned just 10 days later.

Now, in a Covid-19 world, Zuma may find that none of this works and that no one cares. This means there will be no attention, no focus, and no focal point. All of the political arguments and spectacles could fall flat. His appearances would become whimpers rather than the roar of a man who was once able to control the government so tightly.

If this is the case, the law will be able exert control and take over. It will be the dry Latin of the courtroom and procedure that will decide his fate. For him, that would surely be bad news.

This matter has dragged on for decades. Like other arms deal cases in other countries, there may never be one clear outcome. But it will certainly contribute to the end of Zuma as a political force, which will have important implications for the future of South Africa. DM