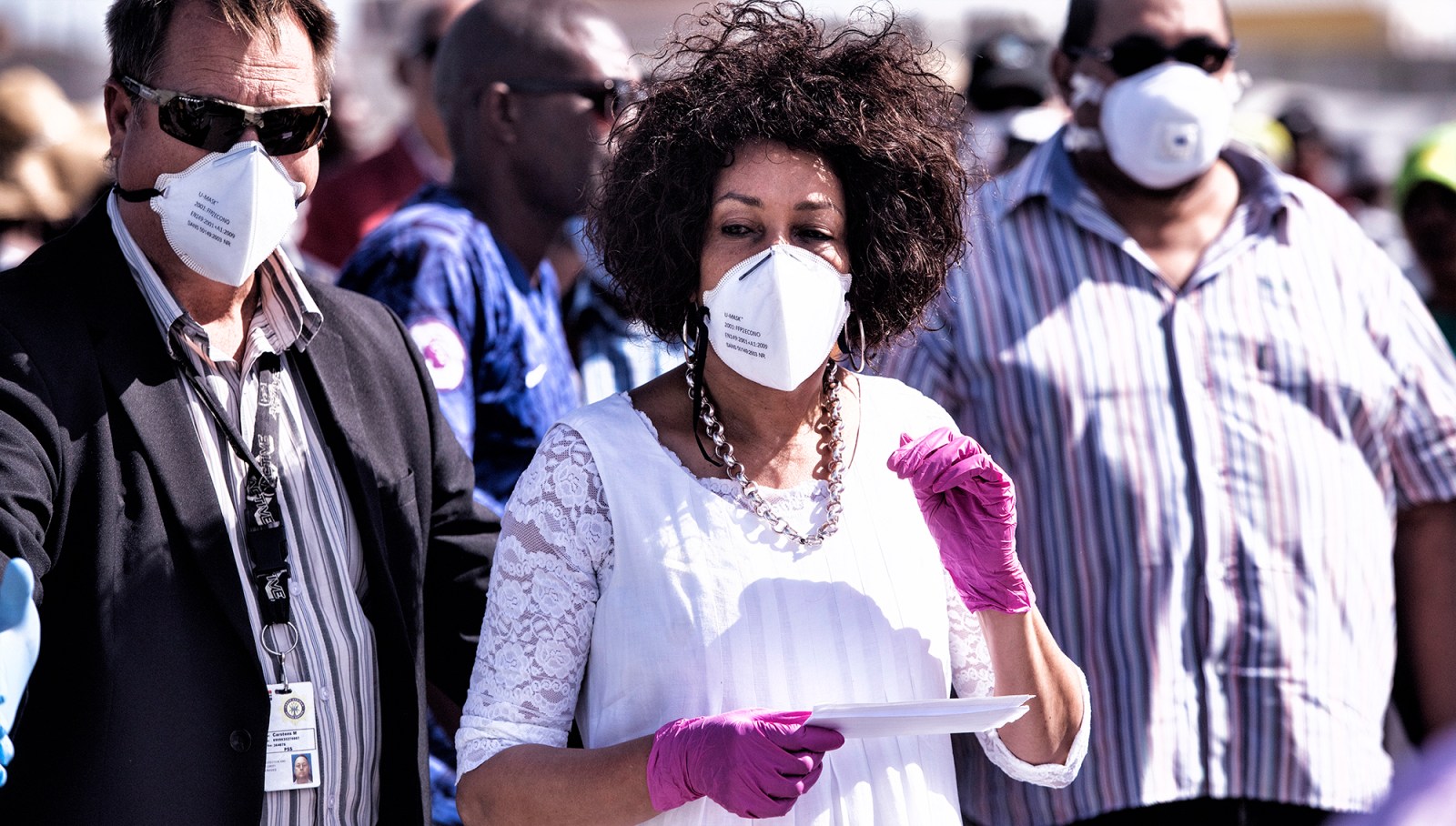 Minister of Human Settlements, Water and Sanitation Lindiwe Sisulu visits Empolweni community in Khayelitsha who were recently evicted in the area on April 19, 2020 in Cape Town, South Africa. (Photo by Gallo Images/Brenton Geach)

De-densification is complex and contested at the best of times and needs to be assessed and navigated on a case-by-case basis; it is definitely not an appropriate response during the Covid-19 disaster that creates further shocks to a part of society that is most vulnerable, nor is it appropriate at scale.

South Africa has close to 2,700 informal settlements that are home to more than 1.2 million vulnerable households. Despite several progressive policies and frameworks, poor, unserviced living environments with their associated risk and inequality persist. With the onset of the Covid-19 crisis, the lack of progress in addressing informal settlements and their magnified risks have come to the fore. A highly debated, yet controversial proposed response to Covid-19 is de-densification (at times rephrased in seemingly less contested terms, such as “resettlement” or “decanting”).

De-densification is complex and contested at the best of times and needs to be assessed and navigated on a case-by-case basis; it is definitely not an appropriate response during a disaster that creates further shocks to a part of society that is most vulnerable, nor is it appropriate at scale.

We as civil society organisations are strongly against any de-densification in the context of Covid-19, especially to temporary relocation areas (TRAs) for the reasons highlighted below:

First and foremost, our fiscal resources are limited and our short-term response has to address basic needs such as water, sanitation, hygiene, solid waste management, stormwater management and food relief. These precious financial resources need to have a single and “bull-headed” focus to ensure that all the informal settlement and backyard dwellers have access to the abovementioned basic services and resources.

This is non-negotiable, and there is good evidence to suggest that these interventions will be critical in safeguarding our communities against the risk they face in the Covid-19 crisis. Achieving this will be a massive endeavour requiring all our collective resources and efforts. Focusing significant resources on only 29 selected settlements for de-densification/TRAs is highly problematic.

“The provision and maintenance of basic services, communication, social learning and behaviour change support, the provision of medical care through testing and well-located field hospitals, and food relief can be rolled out at scale across all informal settlements in the country.”

Second, while de-densification is promoted as a “quick fix” and “voluntary”, it will be neither of these two. Based on over 25 years of experience, we know that such processes take years to build consensus and consume significant human and financial resources.

Third, if the intention is to create improved physical distancing and mitigate overcrowding, any form of voluntary settlement would not necessarily achieve that. Instead, it might create deeper pockets of poverty and decimate social solidarity in informal settlements. The de-densification process itself would necessitate extensive close human contact and resultant exposure risks. In addition, experience has shown that re-densification, where the space that has been vacated is immediately occupied by others, is a reality, as demand for such spaces is great. And overcrowding is not only evident in the number of shacks per settlement; it is also a feature within shacks. Hence, part of the solution lies in rethinking shelter options, such as allowing residents of informal settlements to build upwards.

Fourth, there is significant evidence that many of the TRAs/ resettlement sites are never short term but become more permanent settlements which become new pockets of deeper poverty. Cape Town is home to a few, including the infamous Blikkiesdorp and Wolverivier, and eThekwini Municipality has approximately 9,000 TRA units on numerous sites with their associated social, economic and environmental challenges. Most Metros with TRAs are accordingly not in favour of having more. Historically, many of these have become home to associated violence, poor economic opportunities and ultimately jeopardise the safety of people living in such TRAs.

Fifth, the Disaster Management Act does not allow the state to violate any human rights or overturn any existing constitutional or legislative obligations of the state. In this instance, it will have to comply with the requirement to consult (meaningfully) with the residents in these communities and ultimately, reach consensus. This requires facilitators to access communities and hold community engagements. These negotiated processes are complex and take time and cannot be fast-tracked in the coming weeks or even months.

Sixth, the informal settlement communities we work with have expressed deep concerns about the social, political, economic and technical impact of de-densification and the disruption it is likely to cause. Similarly, international experts and leading organisations, such as the UN Rapporteur on the Right to Housing, UN-Habitat and Amnesty International, have taken a strong stance against relocations and evictions of any kind as a response to Covid-19. De-densification will disrupt existing community networks, as well as support systems at the community level. The consequence will be a further weakening of the already stressed coping mechanisms of the marginalised.

The current crisis creates an opportunity for the government to focus not just on the short term, but keeping in mind long-term solutions that are transformative and sustainable for the urban poor and the state. Releasing well-located land, accelerating incremental in-situ informal settlement upgrading, and building strong social cohesion and citizenry are just a few of them. We are all committed to a proactive human settlement response in the face of Covid-19; but we believe rash decisions will come at a huge cost for the future. DM