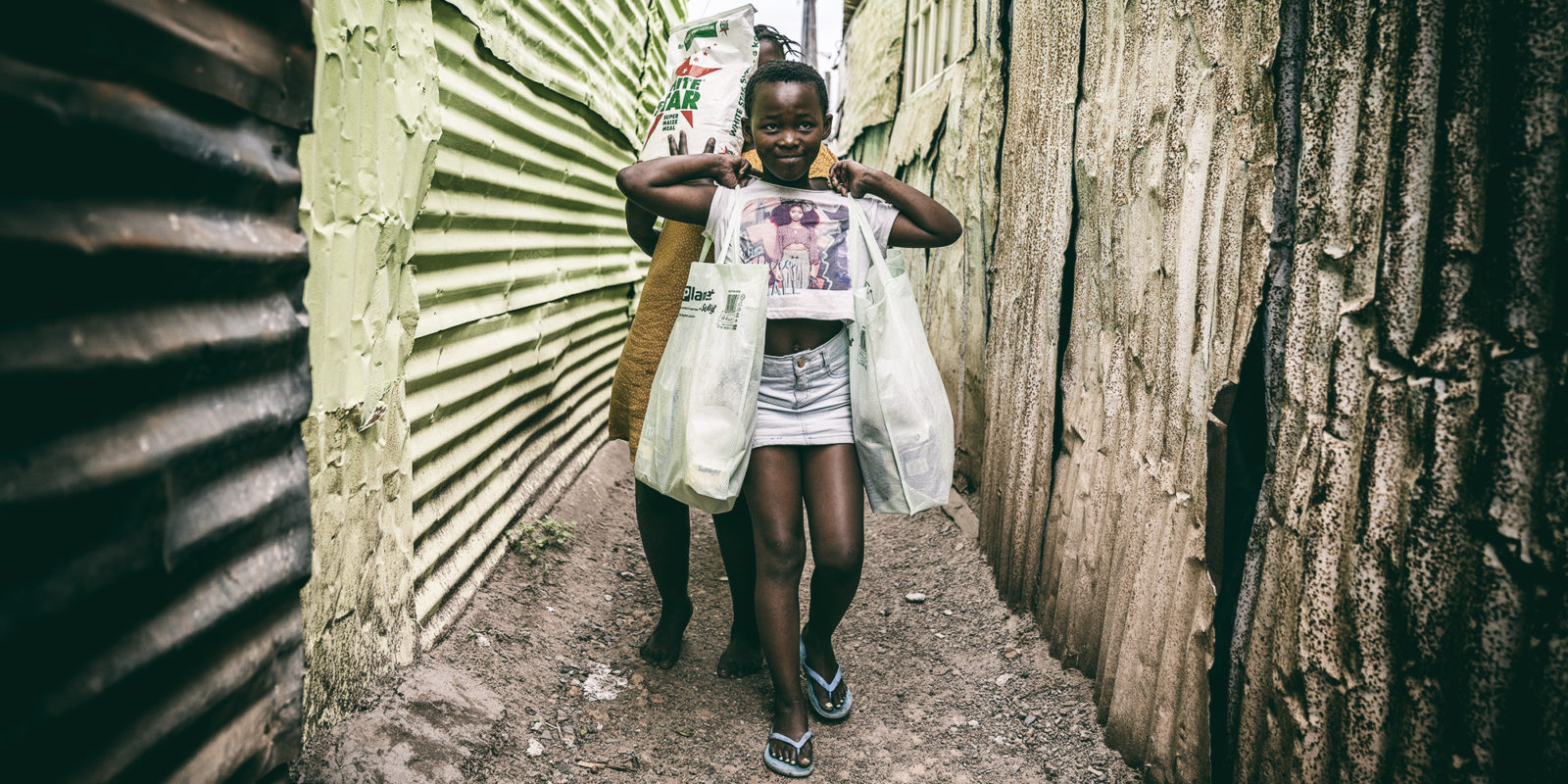 South African girls carry food parcels to their shack in the informal settlement of Masiphumelele, Cape Town, South Africa, 15 April 2020. The delivery of food was organized by the One South Africa Movement led by former Democratic Alliance leader (DA) Mmusi Maimane and the Living Hope Christian non-profit organization (NPO). Food collected from outlet Pick n Pay was delivered by volunteers who worked with local street captains that identified the most vulnerable in the community as beneficiaries. The South African government has extended a total lockdown of the country until the end of April to try stem the spread of the coronavirus SARS-CoV-2 which causes the Covid-19 disease. EPA-EFE/NIC BOTHMA

A coalition representing 245 civil society organisations has called on government to take a decision at the next Cabinet meeting to top up the child support grant with R500 as this could assist in replacing income lost to the lockdown ordered to stop the spread of Covid-19 infections. Organisations also called on government to work with civil society during the crisis, saying that they understand and know communities the best.

A group of civil society organisations has called on government to top up the child support grant on the next payment day to help millions of families get through the Covid-19 lockdown crisis.

The C-19 People’s Coalition, representing 245 organisations, said that this will be the most far-reaching, pro-poor and pro-women way to compensate for the massive loss of incomes caused by the lockdown.

On 15 March 2020, President Cyril Ramaphosa declared the outbreak of coronavirus infections in South Africa to be a national disaster. On 23 March 2020, he ordered a lockdown that only allowed for essential workers to work while others are confined to their homes and are only allowed to leave to do grocery shopping and to go to the doctor. This has caused severe disruption of the economy, including the informal economy.

“Government has received two letters from a broad platform of civil society organisations, community organisations and academic institutions. All the evidence is there. Government does have the money and can make R40-billion available over the coming six months. This will reach 13 million grantees. Despite having had all this information, and widespread consensus across society, government has not yet made any announcement. We call on the Cabinet to immediately approve and announce this urgent measure. Immediate relief is now essential,” a statement issued by the coalition reads.

Rehad Desai from the coalition explained that 245 organisations form part of the coalition. “Without community participation in battling this monster, we stand very little chance. We know lives will be lost, but we also understand that lives will be saved,” he said.

Ruth Hall from the Institute for Poverty, Land and Agrarian Studies (Plaas) at the University of the Western Cape said the C-19 People’s Coalition is advocating that the most important action government can take right now is to top up the child support grant by R500. She said this plan does have limitations as this money will not reach non-citizens, but it looks to be the best plan in the current emergency.

She said government can reach 80% of families worst affected by the lockdown through increasing the child grant. She added that South African Social Security is only set up to deliver 300,000 food parcels to people. “There are millions of people who need food,” she said.

She said the top-up grant should not mean that food parcels be excluded, but the distribution of food is slow and political, adding that according to research into how child grants are spent, food is the biggest purchase followed by education, clothing, health and transport.

“The Covid-19 pandemic is being experienced by most people in South Africa primarily as a food crisis. An estimated 5.5 million informal sector workers have lost their livelihoods and have no cash incomes. This is affecting 16.5 million people,” Hall said.

“At present, state efforts to provide food aid have illustrated two central problems, a severely constrained capacity and the politicisation of distribution. What we require is the capacity to provide aid to millions across society in a non-partisan manner. This can only be implemented through activating hundreds of thousands of community volunteers to plan, implement and monitor such a programme.”

She said the informal food system run by and for poor communities were largely shut down by the lockdown regulations.

“We welcome and stand in solidarity with all those growing, buying, preparing and giving food to those in need. The Community Action Networks [CANs show what social solidarity can achieve. But none of this absolves the government of its constitutional duty to ensure that everyone in this country – whether they are a citizen or not – has access to sufficient food.

“We see no way that food aid can reach the scale that is required, either now during the lockdown, or in the immediate aftermath when we expect this food crisis to continue, as businesses close and jobs are lost. Government, even with the best partnerships with civil society and the private sector, simply cannot do it. You can’t do food parcels for 20 million people, and you can’t sustain this for months. The only option available to government is to use cash transfers as the primary immediate way to enable the vast majority of households facing a hunger crisis to access food.”

She said they also want schools to be reopened and used as a central location where children can collect food. “In the absence of this, poor children are more at risk of dying of malnutrition than of Covid-19.” She added that schools can then also be used to provide infrastructure to informal food traders.

Hall added that with informal wages being lost during lockdown, people were plunged into desperate poverty and food aid offered by the government has not reached the levels to provide any substantial relief.

She said that by topping up the child support grant with R500, it will mean that 13 million grant holders will double their grants. This, Hall said, will substitute wages that were lost. “It is the most pro-poor and pro-women initiative we can do at this stage,” she said. “It will tide people through this emergency period.”

Francina Nkosi from Women in Mining Affected Communities United in Action said in Limpopo that water tanks promised to communities have not arrived yet. She also stressed the importance of providing enough food during the crisis. “There is no way you can overcome Covid-19 without food.”

The call was also supported by the Sex Workers Education and Advocacy Taskforce.

In a statement issued by the coalition, they have also called on government to share its plan to ramp up Covid-19 testing to 30,000 tests per day by the end of the month. “The current stockpile of kits of 600,000 is insufficient and raises additional questions.

“We are also facing a likely shortage of ICU beds, currently only several thousand with ventilator access. Integration of the private and public health system must occur to address this problem. In particular, the inability to bring the private sector into a coordinated response should be addressed as a priority and should contribute to building one future universal national healthcare system. Need must be put before profit,” the statement reads.

According to the statement, efforts to use community health workers to screen and follow up with people should be coordinated on a national level rather than by provincial health departments.

“Community health workers must be paid adequately, resourced, supported and trained in safety protocols and supplied with appropriate personal protective equipment (PPE) so they are able to perform these critically important duties,” the statement concluded.

Desai emphasised that the primary healthcare service should not be neglected in favour of the response to the Covid-19 outbreak.

“Closure of essential primary care services will have desperate consequences for poor and working-class communities, women and vulnerable populations dependent on the public sector for healthcare and sexual and reproductive health services.”

Axolile Notywala from the Social Justice Coalition said the pandemic was a humanitarian crisis and not a security crisis. “We need the state to work with us. We understand and know our communities the best,” he said.

“The rounding up of the homeless and the evictions of people from informal settlements, the removal and relocation of refugees into camps is morally unacceptable. The harassment, beating, and rape of township residents and informal settlement dwellers by police and the army must stop.”

He also called for all evictions to be halted immediately. According to the C-19 People’s Coalition statement, this will include evictions done for the purpose of de-densifying townships.

Notywala added that a retired judge should be appointed to serve as an ombudsperson that will investigate all allegations of human rights violations by security services during lockdown.

The C-19 People’s Coalition also added their voice to calls from organised labour that the Public Sector Bargaining Council agreement must be honoured and public sector workers be given an agreed upon increase.

“This is not just a matter of trust. Across the world, the welfare of frontline workers has been acknowledged as pivotal to tackling the virus,” a statement issued by the coalition reads.

“Public sector workers are already putting themselves at risk on a day to day basis. Denying them the agreed increase is adding insult to injury. It is well known that many highly skilled public sector workers have to take more than one job in order to make ends meet,” Success Mataitsane, the general secretary of the National Union for Public Service and Allied Workers said.

“Our nurses, for example, have been forced into moonlighting for years. This is simply not sustainable … The rich of course, the corrupt, and the chronically wasteful remain largely untouched.”

“If the government continues to undermine collective bargaining, they will be responsible when workers are left with no other option, but to take industrial action. Claiming that we must all make sacrifices to beat the virus has no meaning when some must sacrifice more than others,” he added.

The C19 People’s Coalition will be hosting its first mass meeting, an Online People’s Assembly, on 21 April 2020. DM/MC