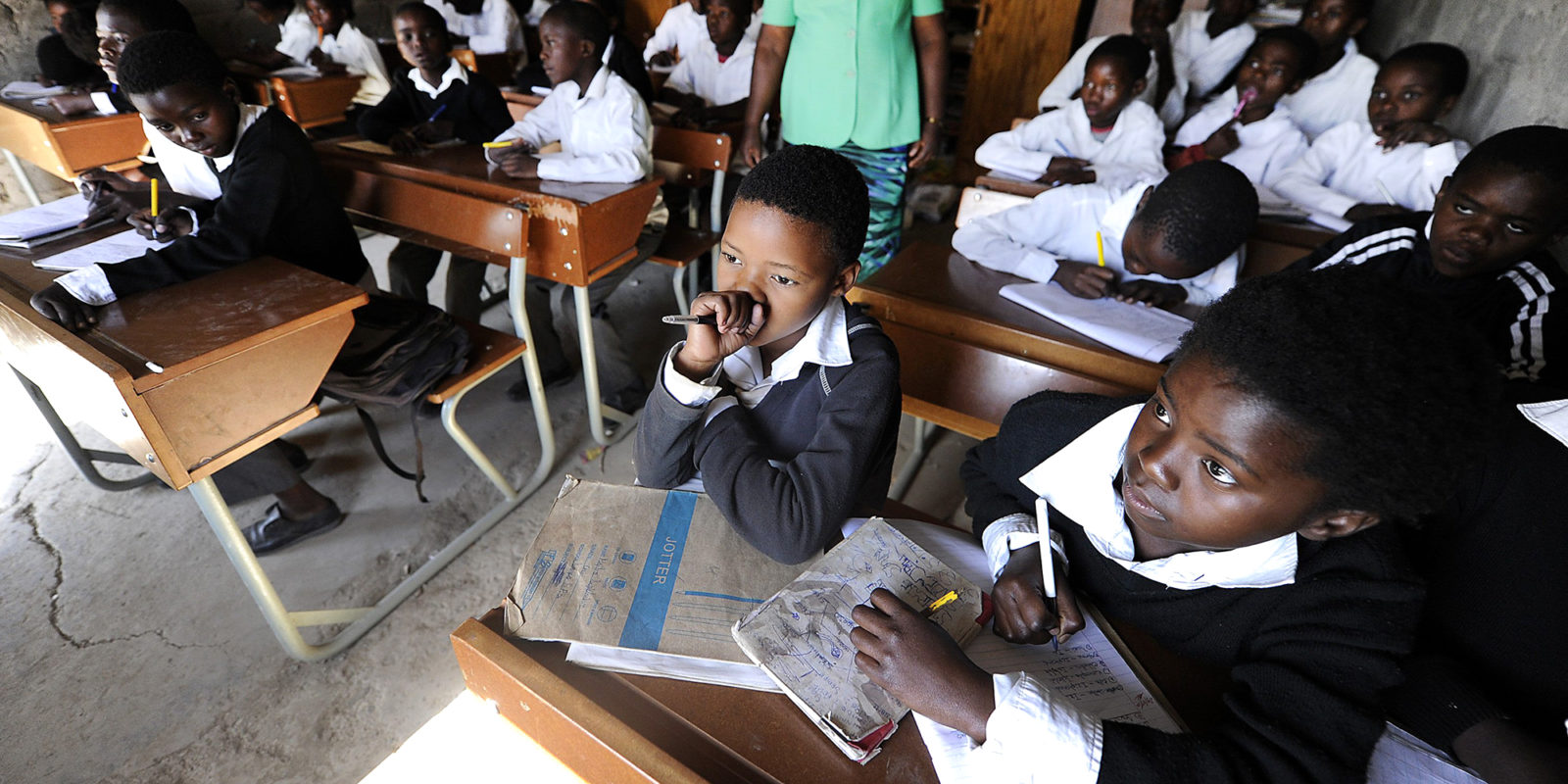 A file photo from 16 September 2010: Pupils from a rural schools in the Eastern Cape area in their classroom. (Photo: Gallo Images/Foto24/Denvor de Wee)

Network operators are being forced to come to the party to help schoolchildren and students access online content during lockdown. The scramble now shows up multiple failings in a system that has long ignored those who can’t afford data.

Melissa Matrose, 14, worries more than most teens. Melissa worries about her mom going out to work in a Covid-19 world as a supervisor of community healthcare workers in the Khayelitsha area. She also worries that she’s slipping behind on schoolwork as each lockdown day passes.

Schoolchildren like Melissa have long fallen through the digital cracks. They are the thousands of youngsters who cannot afford data and only have limited or no access to online learning resources. Without even a Whatsapp school group, or one for her Grade 9 class at Woodlands High in Mitchell’s Plain, Melissa gets no instruction or guidance on what steps to take while being isolated at home. She says: “I don’t know what to do. Sometimes I don’t understand what they’re doing on the TV learning channels but there’s no one to ask.”

Her mom, Thenjelwa Mnqaula, says data and airtime for her daughter already costs her about R450 a month. She spends about R200 a month on her own phone bill. The single mom of two – there’s also a six-year-old in the family – says that R650 a month takes a big chunk of her income.

“We don’t have a laptop, or wifi,” explains Mnqaula. “The data is finished too quickly and I’m worried for Melissa because she can’t get what she needs to learn; she must just sit at home. There’s the learning channel on the TV but most of the stuff is for Grade 10, 11 and 12 and Melissa is in Grade 9.”

It has taken Competition Commission pressure and now Disaster Management legislation, issued on 26 March, to force internet service providers and phone network operators to drop prices. Now they are being compelled to urgently scale up the zero-rating of apps and access to online content from public benefit organisations (PBOs). Zero-rating means users don’t have to pay the data costs in downloading and using approved sites and apps.

Zero-rating access to local education content websites is one of three directives issued by the Department of Telecommunications and Postal Services to support the education sector. Other instructions have been for radio and TV channels to “increase their educational programmes to support awareness of Covid-19” and for “licensees with high demand spectrum [the electromagnetic radio frequencies used for transmission of voice, data and images] to make available connectivity to 152 district virtual classroom platforms with minimum speeds of 10Mbps to support virtual teaching”.

The legal obligation for the networks to act is long overdue, says David Harrison, CEO of the DG Murray Trust, a non-profit that works as “strategic investor and public innovator”. One area of the trust’s focus is digital access as a priority to close gaps of inequality. Harrison says for the past three years the organisation has been trying to get networks to budge on more zero-rating. It has had limited success and mixed co-operation at best, he reveals.

Network giants MTN and Vodacom’s go-to response to questions on this issue is about being overwhelmed by charities knocking at their doors and also working with limited spectrum. Increasing spectrum means releasing key frequency ranges, which has been delayed for years by regulator Icasa (Independent Communications Authority of South Africa).

In the absence of available spectrum, network operators have to spend more on infrastructure, such as towers. Icasa did, however, announce on 6 April that it was making spectrum bands available for temporary assignment in response to the lockdown and networks had till 9 April to apply.

Spectrum constraints mean there is a “limited pipeline” through which to push content. MTN and Vodacom have both noted usage spikes and congestion as people at home during lockdown download content and indulge in gaming, adding to stress to the networks.

Harrison says that’s a feeble excuse as networks should have planned better and were challenged to do so for years. In addition to high pricing, the networks are also criticised by users for not upgrading towers, infrastructure or replacing stolen batteries.

MTN says it spent R77 billion over 10 years on capital investments. Vodacom says it spends 13% to 14.5% of revenue on infrastructure and technology, amounting to R26 billion over the last three years.

Harrison was recently informed that all 50 PBOs the DG Murray Trust supports have been vetted by the Department of Basic Education. MTN also announced it had zero-rated PBO content as the trust proposed, with a cap of 500 MB per month per user. He has not heard from other networks.

The trust, through its technology partner, has made it possible for pupils to access all 50 PBOs through one portal. Harrison says this means networks only need to register a single domain.

He adds: “These are positive moves but implementation has to happen as a matter of urgency and the fact remains that these arrangements should have been in place well before the Covid-19 epidemic as a national strategy for expanding service access.”

Harrison points out that service obligations of network operators need to be reviewed to be aligned to modern day needs, including in the crisis of Covid-19. One obligation is contributions to the Universal Service Access Fund managed by the Universal Service and Access Agency of South Africa (USAASA). USAASA is the state-owned entity established through the Electronic Communications Act of 2005. The fund is meant to “bridge access gaps to ICTs for inclusive adoption of the 4IR [Fourth Industrial Revolution]”.

Contributions from network operators have remained at 0.2% of revenue though the fund was set up to collect up to 1% of revenue as a way to fast-track interventions to close the digital divide in the country. MTN confirms it is paying 0.2% of revenue, while Vodacom would not say specifically how much it’s contributing, only that it “has been contributing and will continue to contribute”.

USAASA’ s response to Maverick Citizen questions was that it was “in the process of drafting a response plan”.

USAASA has been stuck in “fail” mode for years with missed targets and lingering questions over governance, management and administration. Its board was dissolved last year and it is currently overseen by a caretaker administrator, Bill Ford.

It is a pool of money that should be able to be accessed in an emergency, not be tied up in red tape and tardy action plans, Harrison says, adding that the USAF contributions should be directed back to supporting the mobile content of public benefit organisations.

Head of executive corporate affairs at MTN Jacqui O’ Sullivan says MTN has for some time zero-rated educational sites, including ones the DG Murray Trust has been pushing for.

“We have been flooded with requests for zero-rating of websites in the face of the Covid-19 lockdown. The MTN Foundation has sponsored all of South Africa’s Grade 10, 11 and 12 students, with an amount of R3 million, to have full access to the mathematics, CAT and IT as well as physical sciences, natural science and life science learning materials on the Siyavula platform (www.siyavula.com),” she says.

MTN has zero-rated the Department of Basic Education-approved site www.2enable.org website, which offers a detailed curriculum for Grades R to 12. O’Sullivan adds that the company is also assisting 20 universities with zero-rating online content.

Vodacom says it has, together with the Department of Basic Education, connected more than 3,000 schools to run 92 teacher training centres and 10 youth academies. Vodacom also provides free access to the portals of most of the country’s public universities.

“Vodacom’s e-School platform is already used by almost a million learners,” it claims. The platform is free to Vodacom subscribers and carries content in all 11 official languages for pupils from Grade R to 12. DM/MC