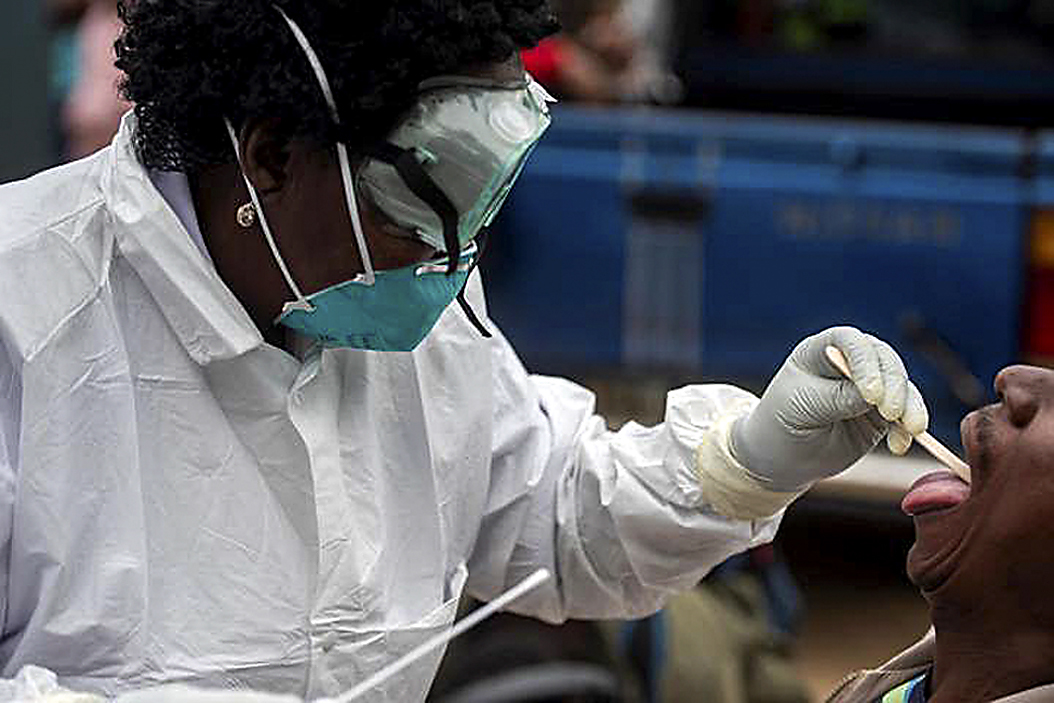 Sonke Gender Justice, as part of the Detention Justice Coalition, has called on the government to release qualifying prisoners as two Eastern Cape prisons have registered coronavirus infections — cases at the East London Correctional Facility jumped by 49 cases a day on Tuesday, April 14. The outbreaks come after complaints from prisoners that they are not receiving any form of protection against the virus.

By Tuesday 14 April prisons accounted for 79 cases out of 174 in the coronavirus outbreak in the Eastern Cape – but the Department of Correctional Services said they were confident that they would “sail through” the outbreak if all the right protocols are implemented.

Human rights bodies, however, raised concerns that prisoners are not given any protection against the virus.

The Judicial Inspectorate of Prisons, the oversight body for South African Correctional Facilities, has suspended its prison visits since the state of disaster was declared in South Africa, but said it was extremely concerned about the situation in the Eastern Cape.

A spokesperson for Correctional Services Singabakho Nxumalo said there are currently 79 confirmed cases of Coronavirus infections linked to the department in the province. The cases include 53 inmates and 25 officials at the East London Correctional Centre and the department’s provincial head office, and one official testing positive at St Albans prison outside Port Elizabeth.

He confirmed that the number of inmates testing positive for Covid-19 at the East London correctional centre had increased by 49 cases in a day. Nxumalo said Correctional Services had screened 519 inmates at the St Albans prison remand centre on Tuesday and tested one.

“Another 27 will be tested tomorrow,” he said. “They are currently in quarantine.” Nxumalo said that so far they had not received a positive result for inmates at the prison.

Minister of Health Dr Zweli Mkhize announced on Tuesday 14 April that the number of positive cases in the Eastern Cape was 174. Two deaths due to the virus have been recorded in the province. Provincial health spokesperson Siyanda Manana said Nelson Mandela Bay, where St Albans prison is, had 65 positive cases and Buffalo City, the area around East London, had 79 cases. These numbers include the cases at the prisons.

Most of the infections in the province are traced back to two large funerals in Nelson Mandela Bay and Port St Johns and two large church services.

Nxumalo said the department had activated the containment and treatment protocol looking at the rapid identification of laboratory-confirmed cases and the isolation of those who test positive to manage the pandemic.

“Healthcare teams are on site rendering care services to distress cases and monitoring those likely to develop acute respiratory challenges.

“Working together with the Department of Health, the department has a list of hospitals and healthcare centres where inmates could be transferred in case they require admissions. Appropriate safe escorts will be employed in order to limit the risk for officials and hospitals receiving inmates in need of care.

“Disinfection of the environment at East London Correctional Centre is under way,” Nxumalo added.

He said as a mitigating measure, out-of-cell time for meals will be split between divisions of the prison to avoid large groups of inmates and officials in open spaces.

“This measure does not abolish access to open-air which is mandatory for inmates,” he added.

All visits to prisons have been suspended since President Cyril Ramaphosa declared the outbreak of Covid-19 as a national disaster in early March. Nxumalo said visits will remain restricted and correctional officers will be handing out toiletries to make sure that “offenders are not disadvantaged”.

“Only two out of 243 centres have reported positive cases of the virus thus far, therefore it remains critical that prevention measures remain in force. Valuable lessons have been learnt at East London and this will influence our disaster response plan moving forward,” Nxumalo said.

“However, it must be acknowledged that, as the virus continues to spread in communities, correctional centres within the same localities will remain vulnerable. Officials attending gatherings and movements from their residences to places of work are receiving attention, in addition to screening.

“We have also procured mobile quarantine sites that will assist with isolation cases. This is in addition to centres already identified and prepared for this purpose across all provinces,” Nxumalo said.

On Sunday, Minister of Justice and Correctional Services Ronald Lamola said at a press conference at the East London Prison that they “have been implementing a comprehensive approach to prevent the transmission and spread of Covid-19 in our centres and offices.”

“What has brought us here in the East London Correctional Centre, are developments we wished we could avoid but unfortunately they befell us. We know that we are dealing with an invisible and vicious enemy that does not discriminate who it targets. We are sad to announce that we have recorded 26 positive cases of Covid-19 here in East London, at Medium C Female Centre, for 23 officials and three offenders. (Referring to the figures as they were on Sunday) We are still awaiting more results of those who have been tested.

The first recorded case relating to the prison outbreak was a female correctional officer who attended a funeral in Port St Johns. Provincial health spokesperson Siyanda Manana said two large funerals, one in Port Elizabeth and one in Port St Johns are thought to be the sources of the outbreak in the Eastern Cape. Thirty of the official’s close contacts were asked to self-quarantine.

Lamola said single cells in the Medium C Female Centre had been designated as quarantine and isolation areas. Officials who work in these designated areas have been supplied with personal protective equipment which includes disposable suits, disposable gowns, shoe covers, N95 masks and eye shields.

“The total number of offenders at the East London Medium C Female Centre is 269 as of the 11 April 2020. We also have two offenders with babies. Loved ones of the two offenders are willing to take care of the two babies and the process to release the babies under their care is underway. We are working with the Department of Health to immediately start with the treatment procedure of all those infected. We will heighten preventative measures and continue to avail PPEs to both offenders and officials. We will be receiving daily preventative and containment reports as well as incidences within the correctional services value chain, especially at the coalface,” Lamola said.

Zia Wasserman from Sonke Gender Justice, part of the Detention Justice Coalition, said since the first lockdown announcement by Ramaphosa they were concerned about the actual consequences of the decision on the health and well-being of those incarcerated and working within prisons.

“Once the state deprives a person of their liberty, it is obliged to provide a duty of care. According to the Nelson Mandela Rules on minimum standards in prisons, prisoners should enjoy the same standards of healthcare available in the community, and should have access to necessary healthcare services free of charge without discrimination on the grounds of their legal status,” Wasserman said.

She said the standard healthcare instructions being given to the community with regard to preventing coronavirus infections is to wash their hands regularly with soap, practise social distancing, self-quarantine if you are at risk of transmission, and stay informed.

“These are practically impossible to follow if you are in prison. Not only are almost all of our prisons overcrowded, many of them also lack sufficient running water and hygiene materials. In lieu of implementing practical prevention measures to reduce the number of people sitting in prison – such as releasing non-violent offenders, processing awaiting-trial detainees, and encouraging judges to use alternatives to incarceration – the government decided to simply stop prison visits. This has been done in other countries too, and we are starting to see the dire impact that this decision has on incarcerated persons,” said Wasserman.

“Firstly, the ban technically means that detained persons are unable to see their legal representatives, which is a serious violation of their rights. Secondly, a lack of oversight visits and reporting (by bodies such as the Judicial Inspectorate for Correctional Services and judges) may have serious implications for the safety of detained persons and the accountability of prison officials. Thirdly, visits by family members and friends are vital for the mental health of detained persons and can prevent violence, and are also a source of food and other essential resources that are not sufficiently provided by the prison (such as bedding, sanitary items and medication).

“Therefore, if government is going to continue with this prison visit moratorium for the duration of the outbreak, it needs to ensure that incarcerated persons’ means of contacting the outside world are increased and more accessible (for example, phone, email, post, video calls). However, it is recommended that government take even more proactive steps to curb the spread of the disease by decreasing the number of people in prisons. The Department of Correctional Services should prioritise the release of elderly detainees, especially those with underlying health conditions, as well as people serving short sentences for non-violent crimes, said Wasserman.

“Furthermore, government should refrain from enacting punitive regulations, which impose prison sentences for those who do not comply with lockdown-related procedures. This will simply exacerbate the problem of overcrowding in prisons and will likely have a disproportionate impact on poorer communities.

Wasserman said they were not surprised by the large jump in infections at the East London Correctional Centre.

“We need to make sure that these prisoners receive proper health care. Isolation because they are ill should not mean solitary confinement.”

Wasserman said they were worried that the Judicial Inspectorate of Prisons is not actively involved in monitoring the prison at this stage and there are no visits.

“The situation at St Albans where people are held in the remand centre is especially concerning,” she said.

“Their trials will likely be delayed for a long time by this outbreak. We are motivating for the release of people who are on bail, but cannot afford it and other categories of prisoners as approved by the United Nations, but we have not heard back from government,” Wasserman said. She added that these categories of prisoners include the elderly and those who do not have much time left to serve.

She said there is a lot of anecdotal evidence from prisons that no preventative measures are being taken to stop the spread of the infection.

“Often there are 60 or more people sharing a cell, a basin and a toilet.”

The spokesperson for the Judicial Inspectorate of Prisons, Emerantia Cupido, said the inspectorate had continued its oversight role throughout the lockdown.

“We have listened to the call of the president and adhered to the lockdown rules pertaining to access of visitors to the various centres.

“We have been in communication with the national commissioner pertaining to their specific operational plans and instructions to their officials. We have given information to our staff and our regional managers that are in contact with the heads of centres daily to monitor what is happening at the centres.