Book Review: Piketty’s survey of inequality has some salient lessons for South Africa 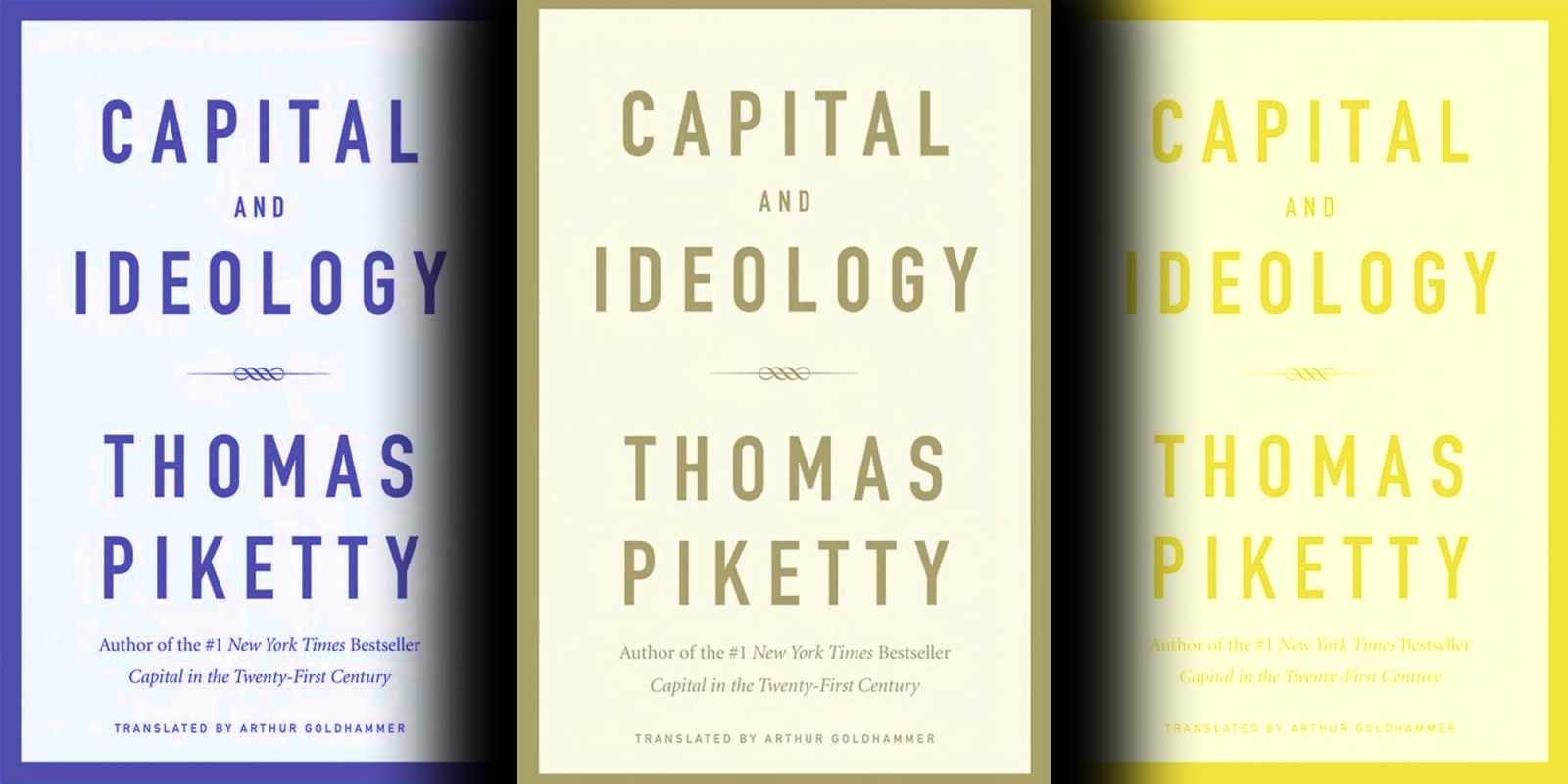 Thomas Piketty’s latest book, ‘Capital and Ideology’ is a wide-ranging and eye-opening history of what the famed French economist dubs ‘inequality regimes’. While this work makes only occasional references to South Africa, it has salient lessons to offer a domestic audience as policymakers, business, labour and civil society confront the economic and social fallout of the Covid-19 pandemic.

On the pages of a modern finance textbook, or a glossy brochure of an asset manager, a well-diversified portfolio would probably have a mix of shares in listed and unlisted firms, foreign and domestic, private debt instruments, public debt such as government bonds foreign and domestic, and other financial assets such as cash deposits. Perhaps 62% of all an individual’s wealth might be in such financial assets, with the bulk of the rest in property. Such a portfolio would not look unusual in 2020. But in fact, this was the portfolio that emerges from Paris inheritance records in the late 19th and early 20th centuries — a period known as the “Belle Epoque,” or “Beautiful Epoch”.

“The preponderance of stocks, bonds, bank deposits, and other monetary assets over real estate reflects a profound reality: the ownership elite of the Belle Epoque was primarily a financial, capitalist, and industrial elite,” Piketty writes in Capital and Ideology, the long-awaited sequel to his 2014 blockbuster Capital in the Twenty-First Century.

While the era may well have been “beautiful” for the gilded classes, such a portfolio would have included some very ugly assets. For example, Haitian debt obligations. Haiti, of course, saw the first victorious slave revolt of the modern era, with a black population asserting its independence from a European power. But this came at a shocking price. France only agreed to Haitian independence in 1825 by wresting an astonishing concession at gunpoint from the infant state: a pledge to pay 150-million gold francs to compensate French slave owners for the loss of their property.

Piketty notes that 150 million gold francs is estimated to have been worth more than 300% of Haiti’s national income in 1825. In modern fiscal parlance that would be a debt to GDP ratio of more than 300% — a crippling burden for an emerging nation-state, especially one regarded with suspicion and hostility by world powers and an economy largely focused on the production of a single commodity, sugar.

In the 21st century, it would probably be a safe bet to say that such a debt profile would be classified as “junk” by the rating agencies.

In the case of Haiti, refinancing and interest-rate payments meant the country “was obliged to repay the equivalent of 15% of its national product every year, indefinitely, simply to pay interest on the debt without even beginning to pay down the principal,” Piketty writes. The debt would be renegotiated at times in an often chaotic manner and a moratorium was agreed from 1843 to 1949 in the wake of a devastating earthquake.

“But the payments resume thereafter, and recent research shows that French creditors managed to extract on average 5% of Haiti’s national income from 1849 to 1915.” So in some of those Belle Epoque financial statements there would have been a steady flow of capital from former slaves and their descendants repaying a debt that had been accrued to compensate their former owners. French banks ultimately ceded this debt to the United States, which at one point occupied Haiti to protect US financial interests. In the end, the 1825 debt was not fully repaid and was only cleared off the books in the early 1950s.

To which the only possible response is: What The Fuck?

It is surely no coincidence that Haiti is the poorest country in the Western Hemisphere today. It had been literally sucked dry for more than a century to pay an odious debt. The Haitian case is one of many jaw-dropping episodes strewn across this epic study, which comes to over 1,000 pages.

In Capital in the Twenty-First Century, Piketty set inequality broadly in the context of access to assets, or wealth ownership, which through recent historical periods has produced a rate of return outpacing economic growth. “…wealth accumulated in the past grows more rapidly than output and wages,” he noted in his conclusion.

His latest book refines such conclusions further with a broad study of “inequality regimes” throughout history, including slavery and colonialism as well as the surge in wealth disparities that has defined the global economy since 1980. It is worldwide economic and political history at its best. Formally trained as an economist, Piketty is also a top-notch historian as well as a political economist — a term that has fallen into disuse in recent decades, but remains as relevant as ever as a field of inquiry.

The fields of inquiry here are fascinating, such as Haiti’s criminal debt burden. Some of it this reviewer is more familiar with, such as the role reversal of the US Democratic Party (the party of slavery and the reactionary South) with the Republican Party (which freed the slaves under Abraham Lincoln) in recent decades. Piketty’s focus on inequality misses some points here, such as the role played by conservative US evangelicals in the Republican lurch to the white South, but that is a minor quibble. As in his previous work, he devotes curiously little time to the question of how China’s emergence as a manufacturing giant undermined blue-collar wages in the US and other countries, exacerbating income and wealth disparities.

Piketty’s proposals include power-sharing arrangements between workers and shareholders, progressive taxation and taxes on inherited wealth that could be used to fund a basic income “toward a participatory and egalitarian democracy” and “permanent circulation of wealth.” Piketty envisions a “participatory socialism”, one that will evolve through robust engagement on such issues.

The merits and drawbacks of such proposals will no doubt long be the subject of discussion, and this reviewer does not plan to get into the woods here. As Piketty says, his “purpose is to begin debate, not to end it”. With the Covid-19 pandemic wreaking havoc on global societies and economies, ideas that months or weeks ago may have seemed far-fetched are now official policy. A grand shift of wealth distribution may well be in the offing.

The book will have a special resonance for South African readers, even if Piketty devotes far more space to other emerging economies such as India, Brazil and China. His assertion that a land reform programme in South Africa has been “absent” will raise eyebrows in ANC policy circles. But almost everyone agrees that its efforts at land reform have been an abject failure, so the ANC owns that perception.

Take the Haitian debt debacle, an economic crime against humanity that effectively looted a poor, vulnerable nation for more than a century. This brings to mind the ANC policy of paying off the apartheid debt after the party came to power in 1994, paving the way for its eventual entry into the coveted ranks of “investment grade” credit ratings. That was a steep price to pay, with capital that could have been used for schools, clinics, roads and social grants directed to foreign creditors who had no qualms about lending money to, and thereby propping up, the apartheid regime.

In both cases, there were political and ideological constructs that made such transactions “acceptable” — one based on “sacred” notions of property, the other on notions of debt obligations in a world of globalised financial markets. Piketty notes that there is a “persistent relation between slavery and debt. In antiquity, slavery for debt was quite common”. Think of the term “bondage.” There was also a relation between apartheid and debt.

South Africa also stands out in this study for the sheer scale of its inequities. Slave societies such as Saint-Domingue in 1780 are found to be “the most inegalitarian in all of history, followed by colonial societies such as South Africa in 1950 and Algeria in 1930”. So only economies based on slave labour had higher levels of inequality than apartheid South Africa.

South Africa, of course, remains wildly unequal, a state of affairs no doubt made worse in recent years by slowing economic growth and rising unemployment. According to the World Inequality Database, in 2017, the top 1%’s share of pre-tax national income was 19.2%, while the share for the bottom 50% was 6.3%.

“Every human society must justify its inequalities: unless reasons for them are found, the whole political and social edifice stands in danger of collapse,” Piketty notes.

Much of South Africa’s policy debates revolve precisely around this issue: be it BEE, targets for black ownership, land expropriation without compensation, appropriate levels of taxation, procurement goals, social and labour plans for mining companies, affirmative action, the extent and size of social grants, privatisation and so on.

In the face of the Covid-19 pandemic, these debates are going to heat up. This book offers salient lessons and historical examples as South Africa grapples with these thorny and explosive issues. DM/BM