Underfunded and under pressure, Britain’s NHS extends a helping hand to a country in intensive care 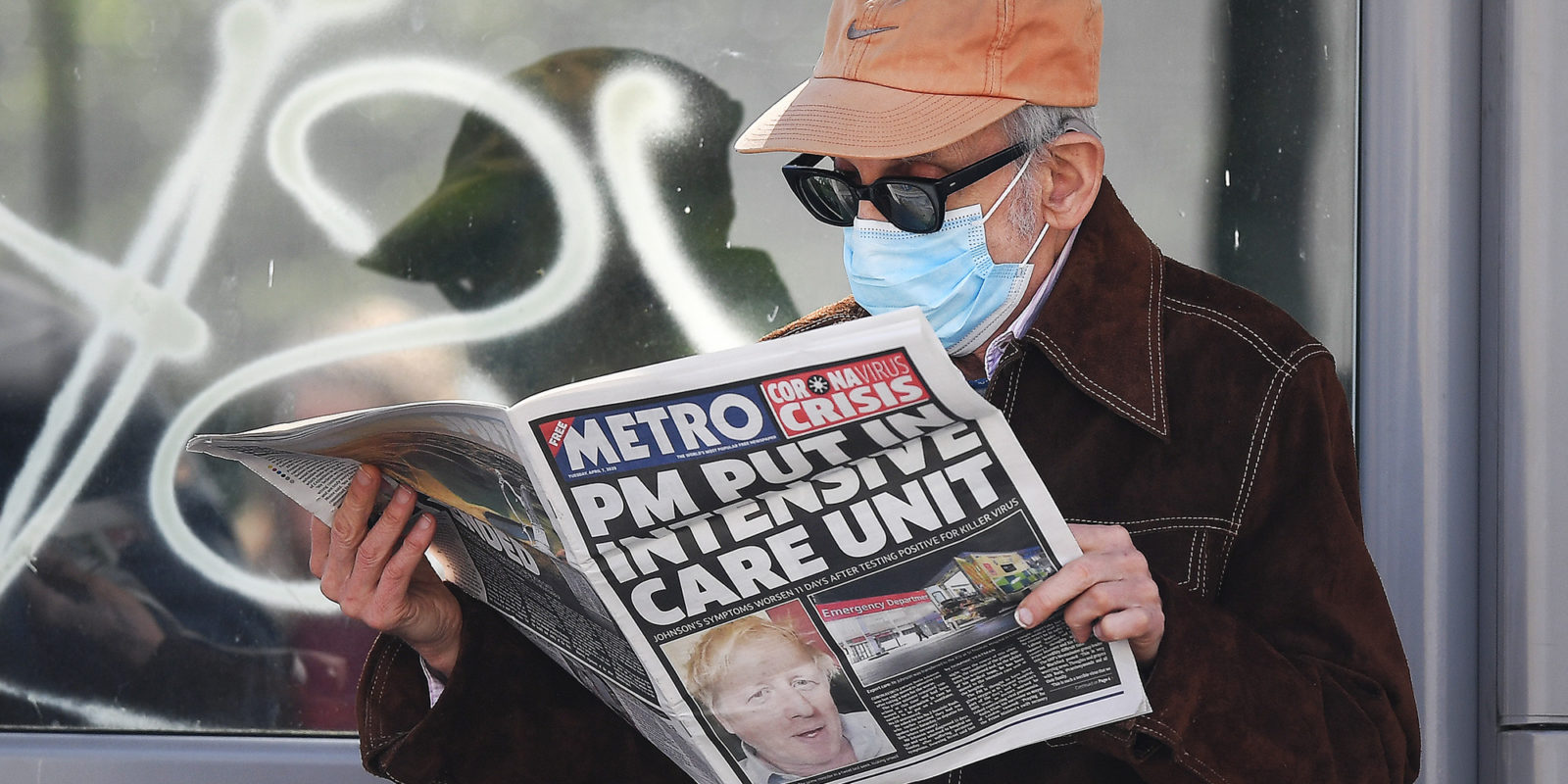 It feels indecent to be pointing fingers, when – as I write – Boris Johnson, the architect of the UK’s national response to Covid-19, is being wheeled into an intensive care ward in one of the best NHS hospitals in London. And yet...

Giving blood is always a bit moving. I’m quite squeamish. I hate needles. But a few years ago I spent my afternoon with a much more squeamish friend receiving a big bag of blood to counteract the worst side effects of chemotherapy. The next day I signed up.

At every donation, I choke a little when the National Health Service (NHS) donor carer holds up the big bag of (my) red liquid and tells me that I’ve just saved three lives.

Today the emotion started to kick in when one of the NHS carers called me four hours before my appointment: Had I received all those texts about Covid? Should I postpone? In the last 14 days did I have any persistent cough? High fever? I avoided being a smartarse and telling her that fatigue, anosmia and hyposmia (loss of smell and taste) now seem to be the most likely early symptoms.

It’s a terrifying time for NHS workers. They signed up to provide high-quality healthcare – free at the point of delivery for everyone who needs the care. The costs of the NHS are hidden in UK taxes, and nearly all UK health care workers spend most of their lives providing free NHS care. It’s been shifting a bit in recent years – with signs of strain in the system as more private providers step in – but at this point of national emergency, the NHS is everything.

In Britain’s Coronavirus Action Plan, NHS staff, and the people who protect them (cleaners, supermarket workers, delivery drivers and some childcarers) have been defined as key workers. They are the (very few) people required to go out to work during our lockdown. I’m moved by this Covid-19 screening because I know it is for them. Unlike screening the blood – which they can do after my donation to protect recipients – this is to save them.

Next, my NHS donor carer asks, “Do you know anyone diagnosed with Covid-19?” “Well, no,” I say, “but yes, well probably”. I tell her that a month ago my son and one of my best mates sweated their way through something nasty, with a bunch of (far from mild) symptoms from the growing list. Yes, it ended more than 14 days ago; I’ve done my rigorous self-isolation. As an over-informed, under-employed person, I’m responding to the constant requests for blood donors because it seems to be one of the few helpful things I can do.

Unless you’re a Royal, a Cabinet minister, or super-wealthy you won’t get tested for the coronavirus in Britain.

In my family, we’d really like to know if my son had Covid-19. My mum is sick. She’s in the group of over-70s with serious medical conditions, and she’s supposed to be “shielded” at home. But she got a new cancer diagnosis four weeks ago and needs someone to drive her to the clinic to get radiotherapy and chemotherapy.

We’ve appointed my son as the designated driver. The evidence points to some immunity if you’ve had it (of course, not yet proven, the virus hasn’t been around for long enough for us to describe the finer details). We do our own risk assessment and decide he must be safer than me, safer than an Uber, and certainly than public transport – eight drivers of London buses are already reported dead from Covid-19 (no wonder they were early adopters of face masks).

But my son worries: what if his illness in early March was just the flu? What if he gets the real virus from one of his housemates? Or from his girlfriend – a key worker busy stacking shelves in the local supermarket? Then he could pose a massive risk to his grandmother. We both take our temperatures daily, fill in the Covid Tracker app on our phones, check symptoms like the most extreme of the “Worried Well”. And I plough through all the scientific papers I can find – and we hope we’re right. But there is no way we can get a test to check.

As I answer the questions from my NHS donor carer, I cling to hope that our judgment is right. The last thing any of us want to do is to contribute to death, rather than life, with an intended altruistic act. I feel more and more frustrated as they repeat the same battery of questions. I answer them all again when I arrive at the donation centre – standing behind the 2m markers, with the nurse calling out the questions to me through her flimsy face mask.

Then, once again, when they usher me towards the donation chair, my donor carer reads from her checklist, she wants me to say my date of birth again, and she double checks, one more time that I’ve not forgotten some symptom. In between, I do the Covid-19 dance with another donor. We shimmy around each other on the way to wash our hands – scrubbing extra hard, then adding the extra-strength sanitising gel provided, before heading to the next desk to fill in forms detailing blood-borne and travel risk factors, using a freshly sanitised pen.

It doesn’t frustrate me because I’m bored of the repetition, or because I am worrying for my family. It frustrates me because the NHS is the one institution that all Brits love. Yet despite this huge love for the institution, we’re simply not doing what we should to protect the people who work in the NHS, or to make it easier for them to do their jobs.

The cornerstone of the UK government’s Covid-19 messaging is the constant refrain “Protect the NHS”. Public adverts scream the message, politicians intone those three words in every statement or interview.

For the past two weeks, the whole population has observed a weekly date (Thursday at 8pm) when we push aside our British reserve, stand on our doorsteps or balconies, or hang out of high-rise windows banging pots and pans and applauding. #ClapForCarers has grabbed the national mood, with people throughout the country stepping up to recognise the selfless acts of the thousands of amazing NHS nurses, doctors, midwives, ambulance drivers, receptionists, cleaners (and blood donor carers) who triage, care and keep the NHS open for business as we journey through this extraordinary plague.

Every day the papers record another loss.

Today it was the first midwife.

And every day there are louder complaints that most NHS workers are still doing this without being able to get tested – many are stuck at home, self-isolating when they could be at work – and often without the personal protective equipment (PPE) that is recommended by the World Health Organisation (WHO).

Last week, on the eve of the second #ClapForCarers, a bunch of NHS workers asked the public to do two things:

And then, one eminent NHS consultant (who was quickly retweeted thousands of times) observed: “If you really want to show your support for us, please never, never Vote Conservative again”.

It feels indecent to be pointing fingers, when – as I write – Boris Johnson, the architect of the UK’s national response to Covid-19, is being wheeled into an intensive care ward in one of the best NHS hospitals in London. Yet it is hard to stand by and ignore that (despite the official line parroted by government officials) two weeks into our national lockdown our epidemic seems out of control.

We already have nearly twice as many deaths as Wuhan ever had. We have one of the few systems in the world that gives free, quality healthcare to everyone at the point of access (and yes, I do know how that sounds to South Africans watching the slow progress of the NHI); added to that the UK is home to some of the world’s most remarkable public health researchers and institutions.

So why does the UK also seem to have one of the worst responses to this pandemic?

Public health has always been a political act and when – with the distance of time – we get to stare into petri dishes of varied national responses, what will we find from this extraordinary (and seemingly uncontrolled) public health experiment?

Almost three weeks ago – five days before the UK went into formal lockdown – the iconoclastic editor of the Lancet, Dr Richard Horton rang the alarm bell, saying in The Guardian newspaper:

“Something has gone badly wrong in the way the UK has handled Covid-19. I know Chris Whitty, the chief medical officer, and Patrick Vallance. I have the utmost respect for both. They have had the services of some of the most talented researchers in the world to draw on. But somehow there was a collective failure among politicians.”

A few days later, Professor Anthony Costello (another former colleague from my days working at WHO) started to shout (mostly in print) that the only strategy proven to work is “Test, Test and Quarantine”; his words echoing the more measured tones of former (and longest-serving) Secretary of State for Health Jeremy Hunt (also runner up to Boris Johnson in the 2019 battle for the Tory leadership).

WHO Director-General Dr Tedros Adhanom Ghebreyesus keeps on repeating the same simple message: “We have a simple message for all countries: test, test, test. Test every suspected case.”

Over the past week, the cry is slowly being heard. At the government’s daily Covid-19 briefings there is talk of testing facilities being set up – initially for NHS workers. And at the same briefings, every day we hear myriad excuses for why it’s not quite working, why targets are missed, a bureaucratic mess that leaves this as a pipedream while the Covid-19 deaths leap up by the hundreds every day.

When the UK’s election season trips back round, political parties will battle over whose NHS it really is. Posturing that you will protect the NHS is always a vote winner. For now, I stand back, still a bit choked, watching these brave, often very ordinary people who keep on leaving their houses and showing up for work. They keep on making sure that healthcare is excellent – for prime ministers, for London bus drivers, for one another. So why are they still not supported and protected by the basics of a testing programme, or reliable access to the PPE they need to get their jobs done? MC

Robin Gorna is an AIDS activist and feminist who has led global and local campaigns and organisations, including SheDecides, the Partnership for Maternal, Newborn and Child Health (PMNCH), the International AIDS Society, and set up UK Department for International Development’s (DFID’s) global AIDS Team in 2003. She spent four years in South Africa leading the UK’s regional and national HIV and health programmes, and is now working on a feminist memoir of her work in the AIDS crisis since 1986.