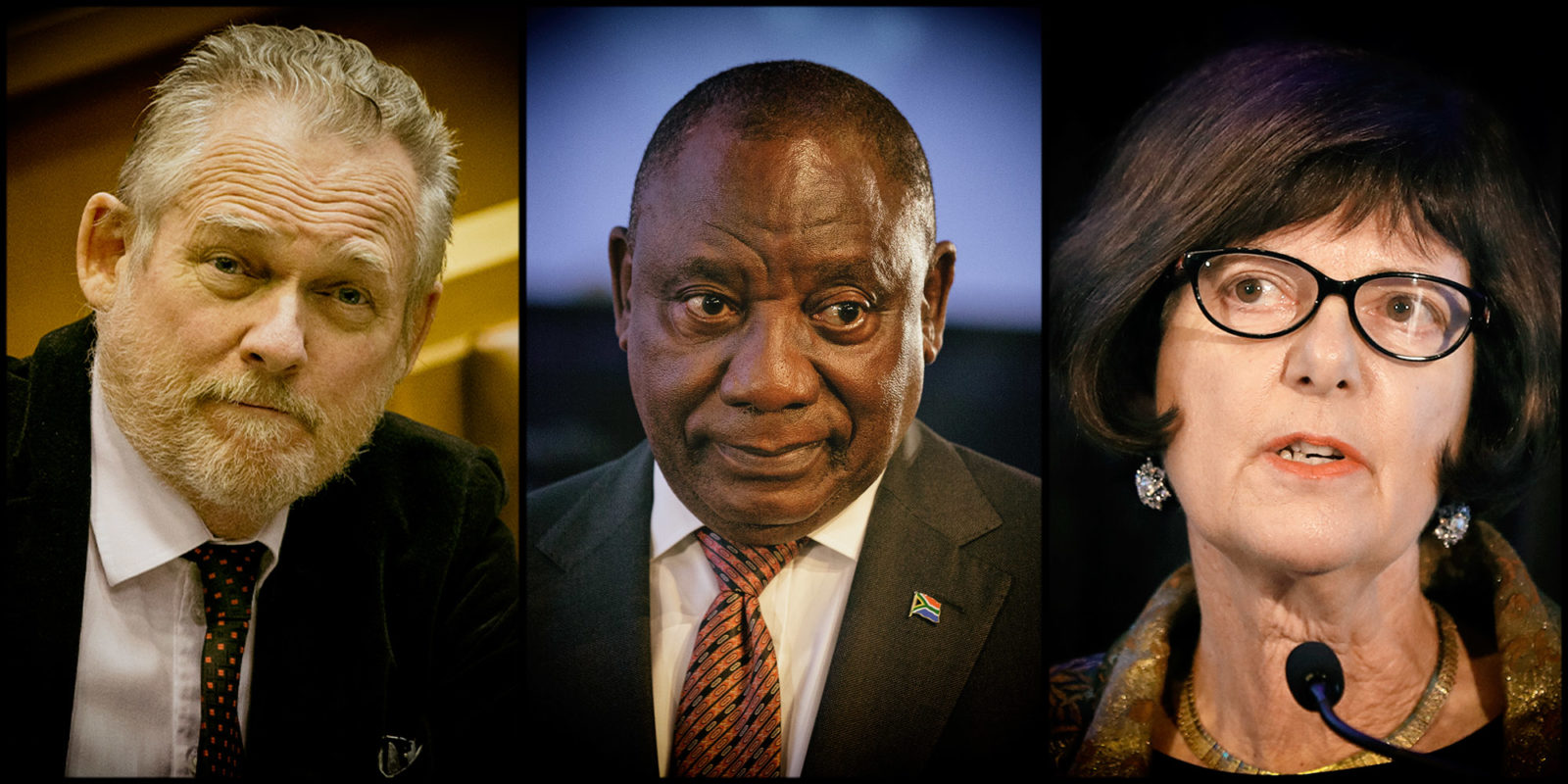 Government’s plan to develop a R40bn Chinese-controlled energy and metallurgical industrial complex at the Musina-Makhado Special Economic Zone in Limpopo is founded on quicksand.

Department of Trade and Industry (DTI) outsourced the development and management of a coal-burning, water-guzzling, capital-soaking, heavy industrial zone in Limpopo to an obscure Hong Kong-based businessman, Yat Hoi Ning, who was removed as chief executive of his previous company amid allegations of misconduct and fraud.

Despite a London high court judgment against Ning, the DTI and the Ramaphosa administration – including Environment, Forestry and Fisheries Minister Barbara Creecy and the Limpopo government – have persisted with this scheme.

Despite the unexamined environmental risks, they have handed over control of a large patch of South African soil for 90 years – and control of a project that, if implemented, will have major impact on the use of scarce resources, on exports, on pollution and greenhouse gas emissions, and on the local environment, labour market and economy.

In this four-part series, we look at:

1) the opaque operator (led by Ning) that the DTI appointed as project manager;

2) the flawed process for designating the so-called Energy and Metallurgical Special Economic Zone;

3) how conflicted Limpopo agencies charged with policing the project are not up to the task (Exhibit A: the wildly skewed operator agreement); and

4) the critical environmental issues that have not been addressed.

Our investigation shows that the DTI abandoned prudent planning, assessment and feasibility protocols for what would be one of the largest industrial developments in the country’s history in favour of a “pet project” approach, driven by opaque and unaccounted-for private and geopolitical interests.

As we point out separately, Covid-19 is the harbinger of the larger crisis of climate change. This project is part of the problem, not the solution.

There are serious questions about the process and due diligence that led to that signature – and to decisions to continue this project in conjunction with SAEMB.

The directors of the company granted the operator permit at the time of minister Davies’ decision were Yat Hoi Ning (aka Yihai Ning) and Chuanhua “Frank” Shang.

Ning is an obscure Hong Kong-based businessman, though he received his bachelor’s degree from the mainland South China University of Technology in 1980. His company biography says he has more than 20 years’ experience in non-ferrous and precious metals trading, investment and management.

Shang is said to be a former attaché of the Chinese embassy in South Africa, but associates say he became the go-to guy for Chinese businessmen seeking a foothold in South Africa.

His official biography says Shang obtained a bachelor of electronic engineering in 1987 from the University of Shandong, China. He worked for the state-owned China National Export Bases Development Corp for 14 years as a director of new ventures in African mining and resources.

SAEMB, the company awarded the operator permit, is supposedly a 100% subsidiary of the Chinese mainland-based Shenzhen Hoimor Resources Holding Company, but amaBhungane has not been able to find a trace of this company.

On the date Davies signed the permit, there was good reason for the minister to withhold his approval pending a proper due diligence as to the fitness of Ning and Shang.

By this date there was public information showing that:

The company put out a statement saying, “The board is extremely disappointed to report that there is strong evidence of funds amounting to several million US dollars being transferred from the accounts … to entities in China, without full value being received.”

What it meant was there was preliminary evidence of fraud.

The names Ning and Kwan might have rung a faint bell for the minister if the statement had been drawn to his attention.

On 15 June 2015, Kwan had written to Davies on behalf of Mwana Africa, stating: “Mwana Africa Plc is interested in the planned South Africa Energy Metallurgical Industry Special Economic Zone after its designation as an SEZ …

“To this end, we are willing to share the related information and our position with your department in terms of the project preliminary work which includes the project feasibility study materials, project cooperation plans and project program, as well as the project implementation program.”

The letter from Kwan was a word-for-word copy of a letter sent to Davies four days earlier by Ning on behalf of another company, the Hong Kong Mining Exchange Company.

Clearly the minister or his officials were not paying attention because there was also media reporting on the ASA scandal.

In April 2017, the Zimbabwe Sunday Mail reported that “more than $15-million could have been spirited away”.

On 1 August 2017 the high court in London appointed administrators to take over the running of ASA and on 4 September 2017 (ten days before Davies’ decision) the Mashonaland Central magistrate issued an arrest warrant for the financial director, Kwan.

So perhaps Davies ought to have been informed that the leading figure behind SAEMB (the SEZ operator he was appointing) was implicated in allegations of fraud that had led to his removal from the board of a London-listed company, that the same company had been suspended and placed under administration and that its finance director was a fugitive from justice.

At that stage, before Davies signed, some additional due diligence might have revealed that:

Shang (Ning’s co-director in SAEMB) and a South African, Briss Mathabathe, were involved in the Chinese venture to buy into Profert, the South African fertiliser producer, an initiative that ended in tears and business rescue.

It was not to be.

Davies told us he was unaware of any untoward associations around Ning prior to signing off on the operator licence: “Nothing was drawn to my attention.”

He said he acted on the advice of the SEZ advisory board, his officials and the Limpopo Economic Development Agency, which was the project “sponsor”.

But even following the formal announcement in September 2017, there were opportunities for the minister and the department to take stock and reassess the appropriateness of SAEMB and Ning.

On 27 December 2017 the state-controlled Herald newspaper reported that Zimbabwean authorities had issued arrest warrants for both Kwan and Ning.

On 10 May 2018 the Financial Mail carried a detailed exposé on some of the preliminary allegations directed at Ning and his associates.

The article quoted DTI spokesperson Sidwell Medupi as saying they would investigate and that, “If any evidence of wrongdoing emerges, the department will deal with such matters expeditiously.”

It also quoted a statement from Ning saying he “strenuously” denied ASA’s allegations against him and that he, Kwan and another director were removed from the board unjustly.

“Our removal as directors of ASA was unlawful and I am currently bringing a claim in the high court of justice [in London] concerning my unlawful removal as a director and other matters,” he said.

Davies was aware of at least some of these developments. He told amaBhungane: “At a subsequent stage the department informed me the individual [Ning] appeared on something called an Interpol Red Notice … We wrote to the individual and said if this is the case, the DTI … was not able to go ahead with supporting this project until these outstanding issues were sorted out.”

Davies said Ning claimed the red notice was a scam and that he would clear his name.

Ning’s name does not appear on Interpol’s current list and Zimbabwean sources said he had since 2017 ingratiated himself with the Harare regime once again.

However, the court actions brought by Ning were struck out.

The judgement noted, “The petition [by Ning] is defended on substantial grounds which involve a number of very serious allegations being made against Mr Ning arising from his tenure as the chairman of the company …

“Those allegations are of misconduct, including fraudulent transfers of funds … Specifically they included stealing money, a corrupt relationship between Mr Ning and the Chinese suppliers and … conspiracy between the Chinese directors. The pleadings are extensive.”

In order to go to trial, Ning was required to make disclosure of documents and correspondence in his possession, akin to what happens in our courts under what is known as Rule 53.

Ning’s application was dismissed because of his lack of candour.

The judge ruled: “The shortcomings are sufficient for me to come to the conclusion that in reality, the actions of Mr Ning are not consistent with a bona fide attempt to comply with the terms of the … order.”

Davies was at least willing to answer questions on the matter.

His successor trade and industry minister, Ebrahim Patel, did not bother to respond to written queries, even though his officials had weeks to do so.

In fact, not a single government agency responded to the detailed inquiries we reproduce here.

Neither Ning nor Shang replied to email or WhatsApp messages containing the same questions.

The only body to respond was the private consultancy, Delta BEC, appointed by the Limpopo Economic Development Agency to carry out the environmental scoping and impact studies.

We deal with their response in part 4. DM

Steve Keating for Reuters
Save 5 mins