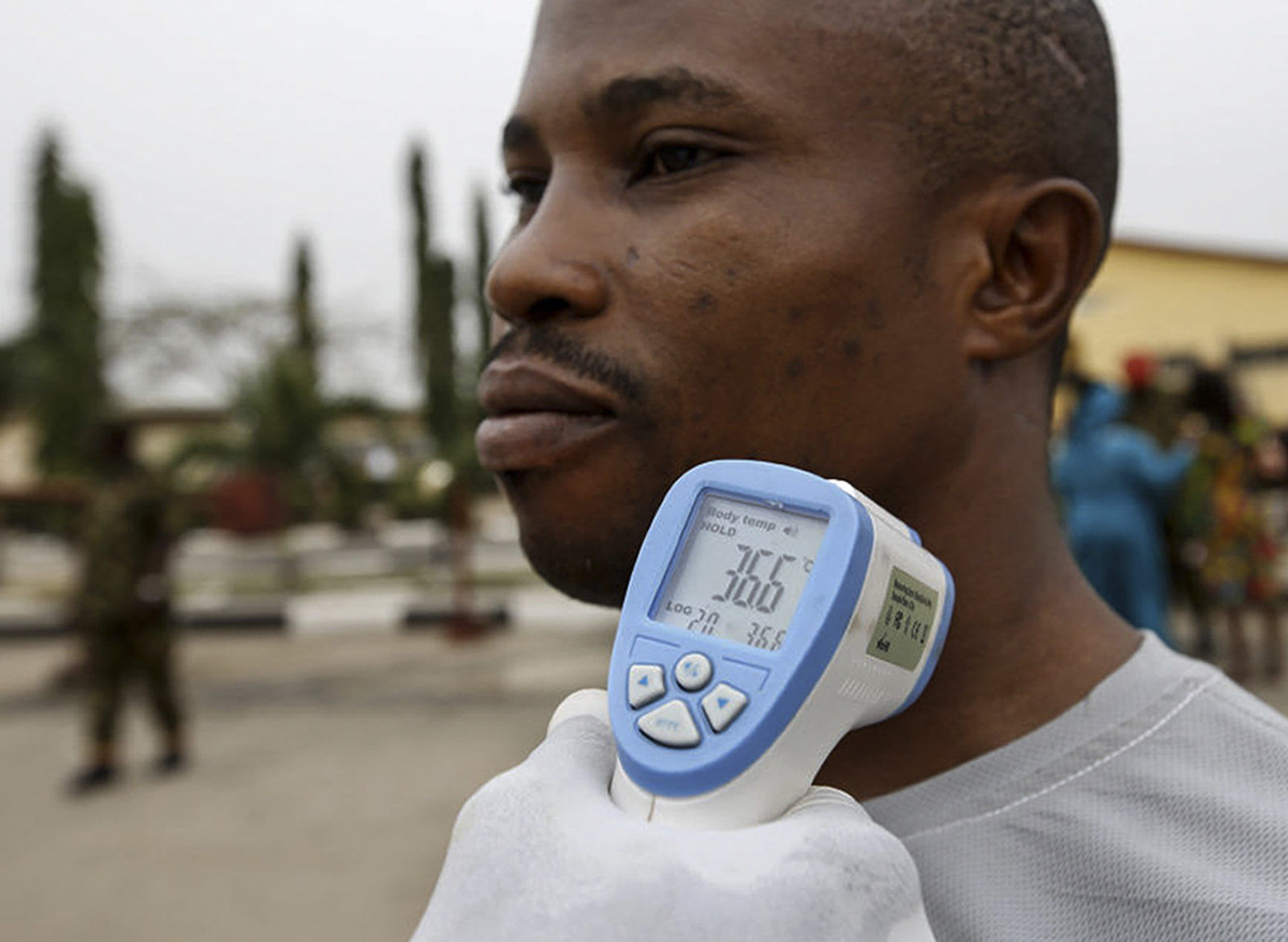 A member of the Nigerian army performs a temperature check on a visitor to the entrance of the Nigerian Army Hospital in the Yaba area of Lagos, Nigeria. (Photo: George Osodi / Bloomberg via Getty Images)

Nigeria is a country where politicians seek medical care abroad even when experiencing mild health issues.

As the world grapples with the Covid-19 pandemic, the African continent and Nigeria, in particular, is not insulated from the crisis. At the time of writing, Nigeria has 224 confirmed cases, 27 medically discharged and five fatalities.

One may wonder how a country with over 200 million people has such a low number of confirmed cases. Thus, the question arises: could it be that Nigeria’s health system is efficient? Or could it be that the health sector is well equipped to deal with such a crisis? Unfortunately, the health system is neither efficient nor well equipped to deal with such health crises or other health issues, such as Lassa fever which has claimed over 180 lives since the start of the year.

Despite Nigeria’s vast resources and wealth, the country’s health system has been critically ill, underpinned by the government’s lack of investment in the health system over the years. This is a country where politicians seek medical care abroad even when experiencing mild health issues.

According to a PriceWaterhouseCoopers 2016 report, it was estimated that Nigeria lost around $1-billion to medical tourism annually. Not even the president, who is charged with the constitutional responsibility of providing every Nigerian with good and quality healthcare, trusts the health system. President Muhammadu Buhari is famed for seeking medical check-ups and treatments abroad, at times lasting months at the expense of Nigerian taxpayers – who are left to their fate by the commander-in-chief.

In 2017, Punch reported that in 2015, 2016 and 2017, Nigerian taxpayers spent 3.94-billion naira (over $10-million), N3.87-billion (over $9-million) and N3.2-billion (over $8-million) respectively, for the upgrading and provision of drugs and equipment for the State House Clinic. The State House Clinic is a facility that provides healthcare services for the president, the vice-president, their families and other employees of the presidency.

The above budgetary allocations are higher than the allocations made to the 16 teaching hospitals across the country that take care of the health needs of millions of Nigerians and train medical doctors and other health professionals for the nation. In comparison, these 16 teaching hospitals collectively got N1.424-billion (less than $4-million) in 2015, N3.333-billion (just under $9-million) in 2016 and N1.943-billion (over $4-million) in 2017. Thus, one can understand the reasons for the failing state of the healthcare system.

The advent of Covid-19 has once again proven the comatose state of the nation’s health system. On 31 March 2020, the Speaker of the House of Representatives, Femi Gbajabiamila, said that “this crisis has exposed in the worst possible way the evident weaknesses of our health system”.

This is evident as the underfunded health system rears its ugly head in the fight against Covid-19, through the inability of the Nigerian Center for Disease Control (NCDC) to conduct mass testing. This is majorly underpinned by the shortage of well-equipped laboratories to interpret test results as well as the comatose state of hospitals across the country – lacking essential equipment and facilities such as test kits, protective gear, electricity and clean water supply.

The agony expressed by Nigerians for decades over the poor attention paid by the governing elite to improve the nation’s healthcare system seems to have caught up with the elites.

As the spread of Covid-19 knows no age, gender, race and social status, Nigerian governing elites are not spared. The contraction of Covid-19 by Abba Kyari, the chief of staff to Buhari, as well as some governors (premiers) came as a shock and an eye-opener to the ruling elite on the urgent need to invest in the long-neglected healthcare system. The ruling All Progress Congress (APC), for example, on 25 March 2020 called on the government to invest in the health sector.

In response to the party’s call, one Nigerian reacted in a tweet:

“One thing should be made clear, the APC led-government and the ruling class would not care, if Covid-19 affected only poor Nigerians who cannot access proper healthcare services outside of Nigeria.”

More so, if the Western countries which they frequented for medical treatment were not on lockdown – every infected elite would be seeking treatment abroad, leaving ordinary Nigerians to bear the brunt of an inefficient system that has claimed thousands of lives.

To a certain extent, Nigerians are happy that the spread of Covid-19 is holding the ruling elite to account as they are now subject to the same perilous healthcare system they created. Like many Nigerians, I am hoping that the government seizes this opportunity to invest in the critically ill health sector in post-Covid-19 Nigeria. MC