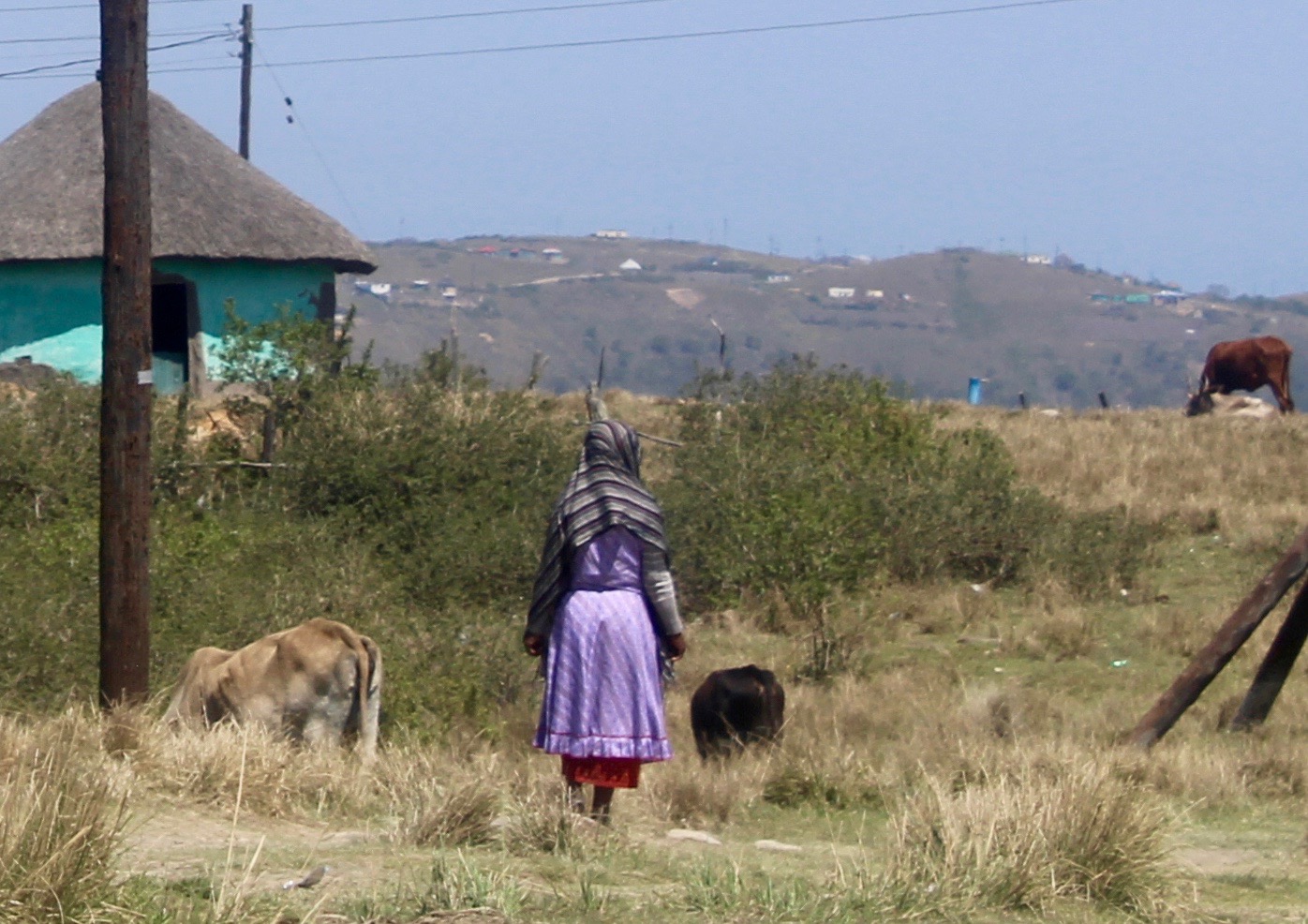 The reality, on the ground, on the Bantustans’ grounds to be more specific, is that ensuring a plateau when it comes to the spread of the virus is going to be the toughest task, says the writer. (Photo: Kathryn Cleary)

If the rallying cry from left movements globally is that Covid-19 is simply a virus in the face of capitalism, then we, rural people, must affirm the statement’s truth in this way: the Bantustan endemic in post-1994 South Africa will usher us more quickly to our deaths in the face of a global Covid-19 pandemic.

We watched how poor planning, underdevelopment and erasure of rural people from meaningful citizenship determined the fate of our families and communities at the height of the HIV/AIDS pandemic. We watched how our families were sent back to the Bantustans to die; how those of us who never left died still, because of underfunding of clinics and hospitals as well as the negation, in any meaningful way, of targeted interventions for social and behavioural changes.

We never mattered. Not more than a footnote, a “by the way”, an afterthought. We are seeing another iteration of this in the time of Covid-19.

The government’s enforcement of a national lockdown without any integrated plan for rural South Africa (save for limiting movement by closing the provincial borders, and adding the traditional leaders to the list of essential services), has confirmed our fears. Are we ready, finally, to do away with colonial borders post-Covid-19? What does this mean for our activism at this current moment?

The apartheid regime’s power to decide who got to live also meant an unlimited power to decide who died by deploying strategies meant to socially and physically isolate an African majority whose only sin was occupying the darker space in the race spectrum.

The logic behind these strategies, as was explained by the political engineers of apartheid, was that separate development was the answer to the “Native question”. It was an othering of the black African which took many forms, but quite dramatically, the formation of so-called “homelands”.

This unjust spatial compartmentalisation of South Africa weakened black people’s capacity to resist colonial encroachment of the country, their country, and consequently, undermining black people’s chance at a decent life.

The post-apartheid political project can be summed up thus: reversing, primarily, through a progressive legislative framework, the apartheid state’s diabolic impact on black people’s lives. The effect of this was capacitating them against food insecurity, inequality, exploitation, and any other related crisis. What remains such a critical and urgent mandate is, unfortunately, far from fulfilled, 26 years on.

The defining feature of this post-apartheid dystopia has been an ongoing past that is yet past; that is yet to be disentangled from the present, in ways that make a socially just future even remotely possible.

The urban-rural divide still renders the legitimacy of the ruling ANC questionable. Their childlike inability to learn from the perils of the past suggests an amnesiac unwillingness to appreciate how the present was possible. Such a negation of the past lays bare before us sharp lessons, leaves our vision warped. It makes us likely to repeat the same clumsiness and mistakes of the not so distant past during the HIV/AIDS pandemic.

A quick reflection, therefore, would allow us to think about the ways in which we failed to anticipate this present moment, by way of preparing for a future crisis. And that future has arrived, in the form of Covid-19.

Voices from below: We have no capacity to respond to this impending crisis

The coronavirus has caused a great deal of panic the world over, with reported cases climbing by the thousands daily, tragically claiming the lives of patients and health workers, as governments desperately try to reach deep into their resources to save as many people as possible in the absence of a vaccine.

At the centre of the South African government’s messaging has been the plea to work collectively towards “flattening the curve”, to adhere to the stringent lockdown measures, the promise of an aggressive screening campaign, and hope for the best. But we know all too well that hope is not a strategy, let alone a good one.

The reality, on the ground, on the Bantustans’ grounds to be more specific, is that ensuring a plateau when it comes to the spread of the virus is going to be the toughest task. A task that will rest largely on the dissemination of clear awareness and preventative messaging into our communities together with adequate provisions for social protection which make compliance possible.

As Amadiba Crisis Committee (ACC) spokesperson Nonhle Mbuthuma says, “Compared to people in towns, who have access to radio, TVs, internet, in the rural communities people are still clueless. As a result, they don’t understand why police officers block them when they go to retail stores to buy food.”

Mbuthuma says that in Eastern Cape they have had to visit villages despite them being far from one another. This physical distance, paired with the government’s restrictions on gatherings and movement (which ACC argues must be amended to fit the rural context to allow for caring of livestock, farming, fishing, etc.), is making it hard for these community leaders to pursue an aggressive and coordinated response to the pandemic and the necessary literacy around it.

Mbuthuma cites water scarcity as a great threat to the communities, despite the centrality of this precious resource in “flattening the curve”.

“We are dependent on water from the rivers, so how do you expect people to regularly wash their hands? Instead, we’ve had to mobilise for sanitisers in order to mitigate the problem.”

Mbuthuma said this is symptomatic of the health system’s unpreparedness in the face of Covid-19, with clinics lacking hand sanitisers.

“People do not know where to go for help in the event that one gets sick. Our clinics are not equipped, they don’t even have enough medication. They only have Panados and painkillers,” said Mbhuthuma.

To make matters worse, she adds that some people are forced to walk about 15 km to reach a clinic.

“When HIV broke,” added Mbhuthuma, “it was a learning curve for the government; so many lives would’ve been saved had there been sufficient information about the virus. But the government still repeats the same mistakes as they did, by failing to prioritise the most vulnerable, including the elderly.”

What then for the Bantustan health workers?

Mbuthuma described nurses from Amadiba and Mgungu clinics as “at least happy” at the news that the ACC distributed sanitisers and ran an awareness campaign, despite the shortages in protective gear, “because it is very difficult for them as health workers to go door to door”.

This sentiment pertaining to the risks faced by rural health workers is corroborated by Nomvuzo Nopote, an activist from Siyazakha Land Rights and Development Forum in Cala and a member of the Alliance for Rural Development (ARD) co-ordination committee.

She said, “Clinics and health workers are not ready at all. They have no gloves, and sometimes they run out of medicine, regardless of a patient’s prescription or illness”.

She said the nearest clinic to her, which services seven villages, has no doctor. It costs R20 to get there, with the additional stress caused by endless public transport hurdles.

Nomonde Phindani of Rural Women’s Assembly recounts, “We went to clinics, health facilities, including the one in Berlin Clinic, before the lockdown to check what we would do to help and if there was any equipment to be distributed to the community.

“Unfortunately, the staff at the clinic told us they also have nothing, they are helping people without gloves, no masks, no protective clothing, nothing. And that programme failed, just like that.”

She mentioned that the physical space was very confined and might prove tricky when nurses have to enforce social distancing among people visiting the clinic.

“We want to help more but what can we do if there are no resources?”

Nopote, though gravely concerned about the pandemic, is anticipating tough times in the aftermath of Covid-19.

“We are trying to encourage people to try and produce food for themselves and not depend on food stores for food. The situation after the virus will be marked by food scarcity and there will be a spike in food prices.”

This would be aggravated by any continued neglect of the Bantustans and failure to put people first. To counter such, there will need to be a well co-ordinated people-centred response, but Phindani further contends that any organising strategies must take into account the very particular experiences of rural people who often have no means to participate in electronic organising which seems like the only viable tool amid lockdown restrictions.

But, she says, “We need to think of creative ways to deal with the virus: how to mix and create homemade sanitisers, how to create masks, if you don’t have money.”

She agrees that the pandemic will have adverse effects on women’s ability to produce through their usual agricultural cooperatives, who often work in spaces such as schools which have now been closed. But we must collectively find a common way. MC

Constance Mogale is the national co-ordinator of the Alliance for Rural Democracy (ARD). ARD is a collective of civil society organisations and community groupings championing rural democracy and restorative land justice. For more on the alliance, its work and continued activism in the face of Covid-19 follow them here: Twitter: @RuralDemocracy

As xenophobia spreads and crime spirals, where are the South African intelligence agencies?