When will Bheki Cele learn that guns and public health don’t mix? 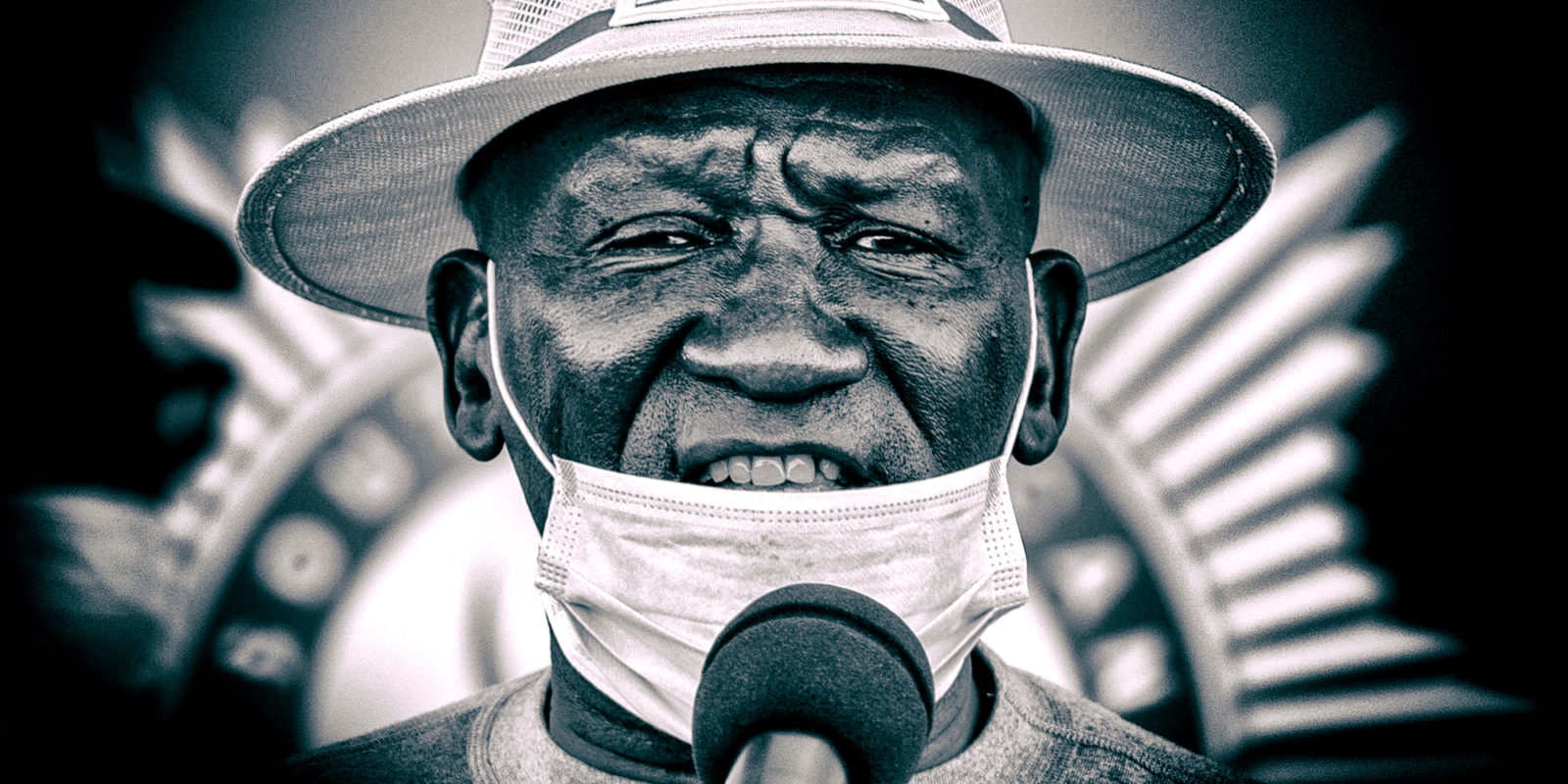 South Africa has deployed the SA National Defence Force to enforce Covid-19 compliance with state directives, in communities with some of the worst toilets in the world. This is a disastrous strategy and will do nothing to stem the pandemic.

“The gap between what policing could be and what it should be in a constitutional democracy, and what it actually is, emerged sharply this week…” Daily Maverick’s Marianne Merten wrote in the week of the Marikana inquiry in 2017.

She could have been writing about the first week of South Africa’s national lockdown to slow the transmission of Covid-19; and her words raise the spectre of whether the most dangerous person in South Africa is Bheki Cele, Minister of Police.

On Day 5 of lockdown, the death toll stood at three dead to Covid-19 and three dead to brutality at the hands of security forces unleashed on citizens in the name of enforcing it.

Alarm bells should be ringing loudly and the question, “Will the SAPS, under Cele’s kragdadigeheid leadership, be allowed to bring South Africa to its next Marikana?” is one we all need to face.

Confronted by an unknown virus, generals and politicians everywhere are resorting, predictably, to war talk. After Day 1, speaking to the nation, Minister Cele declared: “Let us unite against the virus. Remember, our aim is to arrest the virus not to arrest people.”

His words alerted the country that, in his mind, we were actually on a military, not a disaster response, footing.

“This war we find ourselves in,” he said, “is not a war against any citizen of this country, but is a war against a common enemy, the coronavirus. Whoever breaks the law and chooses to join the enemy against the citizens will face the full might of the law and police will decisively make sure that we defend the people of South Africa.”

What are the emotional and political implications of this rhetoric?

“Metaphor,” Aristotle wrote, “consists in giving the thing a name that belongs to something else.” Susan Sontag recalled this comment in her essay on AIDS and its metaphors, arguing that to declare war on AIDS was to create a script for abusive relationships.

Metaphors make for slippery politics: no-one can physically arrest a virus. This means that Cele’s proposal is to arrest the virus by arresting people.

“If there is one thing our civilisation is good at, it is fighting an enemy,” wrote Charles Eisenstein earlier this week, “we manufacture enemies, cast problems like crime, terrorism and disease into us-versus-them terms … we single out Covid-19 as a call to arms, reorganising society as if for a war effort…”

The evidence for using guns to enforce public health is not in Cele’s favour. Militarised policing in the name of science, health and the common good did not work in the Democratic Republic of Congo under ebola.

Similarly, the Jordanian government was forced, only four days after enacting a defence law that attempted to impose a total curfew on its citizens, accompanied by air raid sirens, thousands of arrests and a threat of one-year prison sentences for disobedience, to allow people to walk to small, local grocery stores.

Why aren’t lessons learned in similar situations being applied here, especially given our national history of trauma at the hands of militarised authorities? Roughly a year ago, attacks on Doctors Without Borders in the DRC led to a painful self-assessment by the organisation. In an essay in The New England Journal of Medicine, Vinh-Kim Nguyen, a DWB medical team leader wrote: “Early in the epidemic, we witnessed armed agents forcibly bringing patients in for treatment. In a population already traumatised by violence and forceful responses to numerous crises, such tactics fuel distrust of responders, which prompts patients to flee and spawns violence.

“The lesson is clear,” Nguyen concluded, “guns and public health don’t mix … Displays of armed force-feed a vicious cycle of mistrust, infection and violence. If we continue down that path, those seemingly fantastical dystopian outbreak movies, with their heavily armed global health forces and rebelling populations, may not be so far from reality in the near future.”

The inescapable conclusion is that policing for health is not war. A totally different paradigm is needed.

If the current South African policing and military leadership cannot provide this paradigm shift, the country requires — and deserves — a replacement who, modelling kindness and thoughtfulness, ushers in the kind of social regeneration that most South Africans dream of, but have never yet received from the state.

Policing is not a declaration of war on citizens. Indeed, the policing Code of Conduct calls for actions to “be guided by the needs of the community” and “contribute to the reconstruction and development of, and reconciliation in, our country”.

As a nation, we already know that sanitary environments cannot be implemented at the point of a gun. The disastrous attempt to manage small-scale fishers along South Africa’s 3,000km of coast through quasi-militarised policing did nothing to prevent poaching. Relying on policing to enforce policy compliance instead of working with communities who rely on marine resources, the approach criminalised people who were fishing for food.

A catastrophic loss of local-level trust between marine law enforcement officers and fishing communities resulted, as Marieke Norton brilliantly elucidates in her study of marine compliance in seven Western Cape towns. Only a complete about-turn, the Abalobi project, has gone some way to resolving the situation. A collaborative project of environmentalists with fishing communities, it is designed to address local needs and facilitates a situation in which relationships of consent and cooperation can flourish.

The simple reality is that a handful of people with guns and emergency laws cannot forcibly control for compliance, because the effect of forcible compliance is to destroy relationships at a time when they most need to be built.

Yet here South Africa is once more deploying the SANDF to enforce Covid-19 compliance with state directives, in townships with some of the worst toilets in the world. This is a disastrous strategy and will do nothing to stem the pandemic.

Shack settlements are places in which life has never been confined to the indoors. People go out, share bathrooms and need time out on the street. Imported solutions designed for the elite and middle-class areas cannot be imposed in these areas, especially if the objective is to improve health in body and mind.

Even through violence, people cannot be forced indoors into shacks and tiny homes. Physical distancing is impossible, so enforcing it cannot be the priority intervention. More urgent is the remediation of failed water and sanitation, to equip and enable and capacitate people to prevent the spread of disease simply by washing their hands.

President Cyril Ramaphosa must urgently compel a role-change for the SANDF that recognises the disaster in the making that is the lack of sanitation in our most overcrowded areas.

The SANDF does need to be mobilised, but in terms of its constitutional mandate, it needs to be placed not in policing but in the service of an entirely different department. South Africa’s Constitution makes provision for this to happen: the president can authorise the employment of the Defence Force for service inside the Republic in order to “(a) preserve life, health or property in emergency or humanitarian relief operations; (b) ensure the provision of essential services; (c) support any department of state, including support for purposes of socio-economic upliftment.”

Bring in the Army Corps of Engineers and the SANDF to fix toilets, ensure running water and do what 20 years of state capture and structural corruption — the impossible bureaucracies of neoliberal municipal procurement — have failed to do.

Second, to survive at this critical and confusing time, the state needs to work out a strategy of radical compassion which supports the unpaid work of care that is done in families, predominantly by women, and on which the whole of society now depends as waged labour collapses along with the national and global economy.

In this regard, it is also necessary to examine the ramifications of the “Big Daddy Says So” approach of Cele, because it models the kind of patriarchal control that imposes rules without consideration of the context in which they are to be obeyed. The implicit violence of his approach is extremely risky in a country in which interpersonal violence against women, especially behind the locked doors of a home, is rampant. The impression is given that a woman who is being abused by a partner, or a child by an uncle, can be slapped about by a uniformed man if they try to escape violence.

Is Cele, and behind him the president, really saying that domestic lockdown, an urban and suburban solution that is irrelevant for the majority of South Africans, is the only possible way to manage this unknown health threat?

Can these men really believe that the solution to a problem as massive as Covid-19 is to turn, once more, to women’s invisible work in homes? Is it unknown to them, as they force citizens to retreat, that the labour of care, including nursing, cleaning and supporting wellbeing, will fall overwhelmingly to women? And are they asking how those shouldering these reproductive labours of care, that will keep households safe, are to be supported?

Such questions do not appear to have been addressed.

This core economy of the household is where, as economist Kate Raworth points out, the essentials of family and social life are sustained with time, knowledge, skill, care, empathy, teaching and reciprocity.

The core economy is being asked to hold society together now and households have to be supported to successfully navigate this time. This means that the most crucial work of the state at this moment is to decrease stress and vulnerability.

Household ecologies need swift, concrete and materially visible support: building immunity has to mean that community is built, or strongly supported where it is functioning, which means that soldiers are needed to provide the taps and functioning toilets that bureaucrats have failed to provide.

Militarised policing has never worked and it will not work now. Instead, we should all call for a radical reassessment of the role of the police and army and focus instead on deploying these resources for a massive campaign of rapid social assistance. DM

Lesley Green is professor and director of Environmental Humanities South at the University of Cape Town, whose research focuses on the interface of science and the state.

Vanessa Farr holds a PhD in women’s studies and has served as a specialist on small arms and armed conflict to the UNDP and UN Women for two decades.