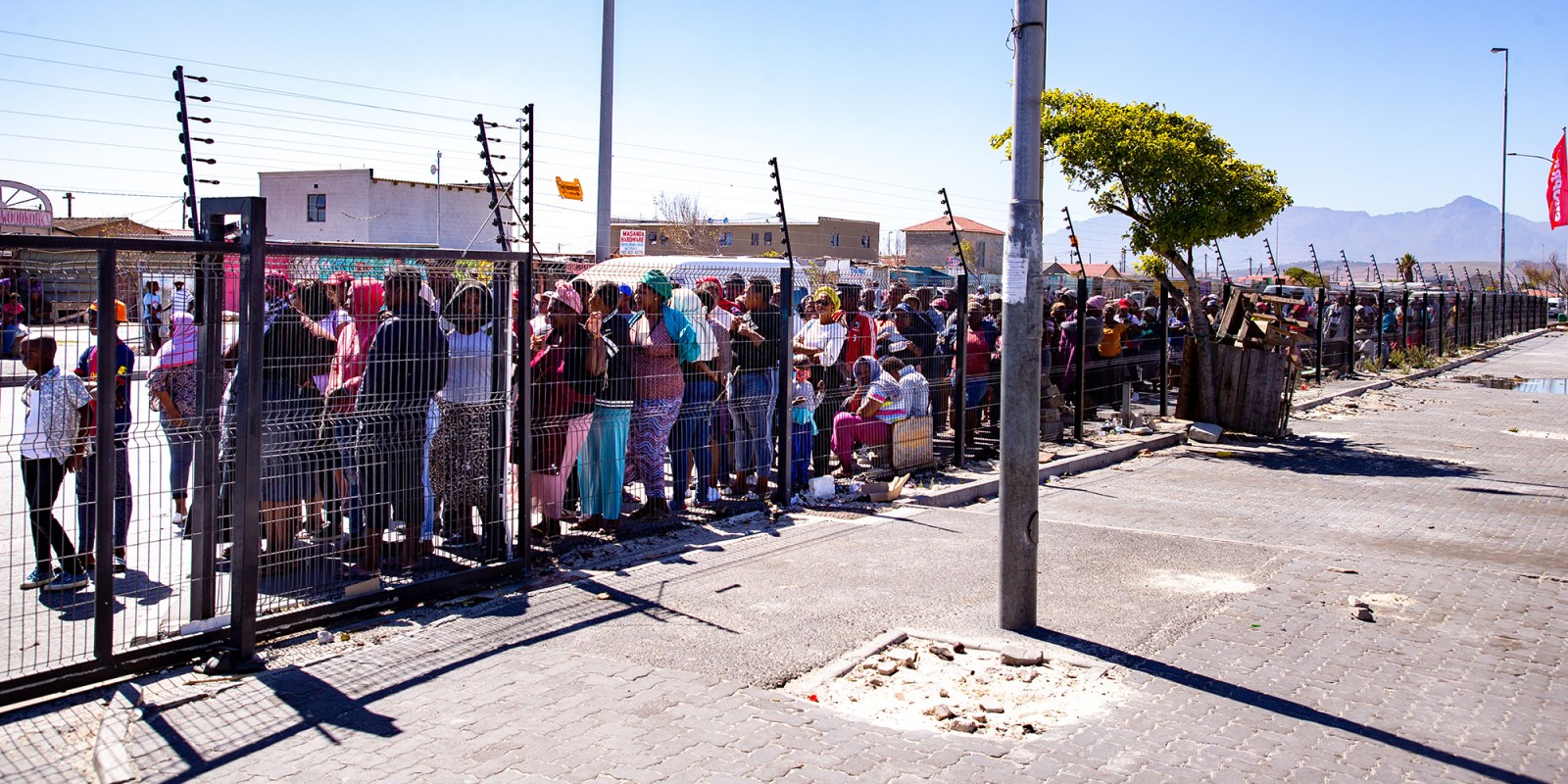 People queue to collect their Sassa social grant payment on Monday 30 March in Makhaza, Khayelitsha after the government declared a 21-day lockdown as part of the State of National Disaster declaration by President Cyril Ramaphosa. (Photo: Roger Sedres)

On Monday 30 March, Social Development Minister Lindiwe Zulu visited a number of social grant pay points to observe adherence to lockdown regulations. The first day of payments did not go as smoothly as the minister intimated in a media statement.

Ten days ago, Social Development Minister Lindiwe Zulu announced the early payment of April 2020 grants. The first two days of social grant payouts were to be reserved for pensioners and people with disabilities, said the minister. The first day was marked with tragedy when three elders lost their lives – one, reportedly after disembarking from a taxi on her way to collect their pension. The second reportedly died while waiting in a collection queue, and the third on the way back home.

While the early payout dates were intended to offer relief to recipients, for many the day was one of hours waiting in queues with little to no physical distancing. At some pay points, recipients were turned away empty-handed when funds ran out.

In a press briefing on Tuesday 31 March, Zulu said some of the challenges that arose on the second day were due to an excess of recipients who were not meant to collect their grants during the day allocated to the elderly and people with disabilities.

Johannesburg ward councillor Lindani Zulu accompanied his 70-year-old mother and two other pensioners to collect their pensions on Monday 30 March, in Ulundi, KwaZulu-Natal. Zulu says he left for KwaZulu-Natal when schools closed, a week before the lockdown was announced. Had it not been for that decision, his mother and neighbours would have been stranded with no means to travel to their pay points.

“I accompanied my mother to collect her pension in town. And because there was no transport, I also took two other gogos with us,” says Zulu.

“But, what I discovered there [at the pay points] were queues. Queues at shops, garages, banks – everywhere. It was impossible to even buy anything because there were queues of people who had come to shop and others who came to collect their grants.”

Zulu says they left home at 7am and only returned at 5pm. They were unable to do any grocery shopping because of the long wait.

“There were just long queues and we couldn’t do anything because the time was also limited because these places close at specific times.”

Zulu says the lockdown also had an adverse impact on recipients who waited all day with no access to food.

“People were very hungry because food outlets were closed so there was absolutely nothing they could do. It was difficult to even get water.”

He says people waiting in queues had to sit on the ground as there were no chairs.

“And as far as social distancing is concerned – there was none at all [and] there were no masks. But when we entered the store, they sanitised our hands.”

Thembeka Mtshali, 26, says her experience was similar to that of Zulu. Mtshali, who lives in Thokoza in the East Rand of Gauteng, says she collected her grandmother’s pension on 30 March.

“I went with my two elderly aunts who are also pensioners,” says Mtshali.

“The stores had measures in place [to guard against the coronavirus] but there were just so many of us, and waiting in a queue to enter the store so you can shop was exhausting.”

Mtshali noted that, like her, many who had shown up to collect their grants were concerned about the stores running out of grocery items because of the large number of shoppers and social grant beneficiaries.

“People were more worried about food being finished before they enter than social distancing. They did, however, sanitise our hands when we entered the stores. I was a bit worried, but I can’t say I was overwhelmed by anxiety. My only stress was being able to get all the necessities with the money and not finding stores empty after waiting in line for a long time.”

In addition to her worries over not finding the essentials she had set out to purchase, Mtshali says she was disturbed by the lack of consideration for pensioners who had to stand in long queues at stores.

“They [pensioners] had to wait in line with us and there were no chairs or water so they had to stand in the queue to enter like everyone else, which I felt was inhumane. And when I asked why there is no pensioners’ line at the one store, they said there’s a lot of pensioners.”

Mtshali says the stores she visited had run out of affordable alternatives to basic essentials. She also noted that many shoppers had stockpiled on the cheaper items, leaving only the more costly ones on shelves.

In a statement issued on Tuesday 31 March, human rights organisation Black Sash urged the South African Social Security Agency (Sassa) and its payout partners to improve the process of collecting grants during the lockdown period.

“We appreciate that some retailers and commercial banks made great effort to enforce the necessary protective measures such as social distancing and hygiene protocols. However, the majority of grant beneficiaries were left without the benefit of any protective measures while waiting for hours in very long and congested queues.

“News reports show that there was little to no government support at many retail outlets to assist with social distancing. Almost no provision was made for sanitising, hygiene and toilet facilities,” the human rights organisation wrote.

“The Black Sash urges SASSA, SAPO, retailers and the banks to further refine their implementation plans to ensure that the COVID-19 safety protocols are strictly enforced for the remainder of this payment run. The context requires that social grants beneficiaries are served in a secure environment, with dignity, and that their most vital asset – their health – remains protected,” Black Sash added.

The social development minister said the payment system was not set to restrict payouts to exclude beneficiaries who were neither pensioners or persons with disabilities.

“Thus, all types of beneficiaries were able to collect their social grants,” said Minister Zulu. The minister added that those who collected their grants on the day that was not allocated to them took advantage of the provisions made for the elderly and recipients of disability grants.

Zulu said following the previous day’s challenges, the department had a virtual conference with its payout partners and had since implemented interventions.

“Today, crowd management was not as bad as yesterday,” said Zulu. “The number of chairs will [also] be increased.”

Zulu ended the briefing by offering her condolences to the families of the deceased, adding that the department will “take care” of the families who need the money more during this period. DM