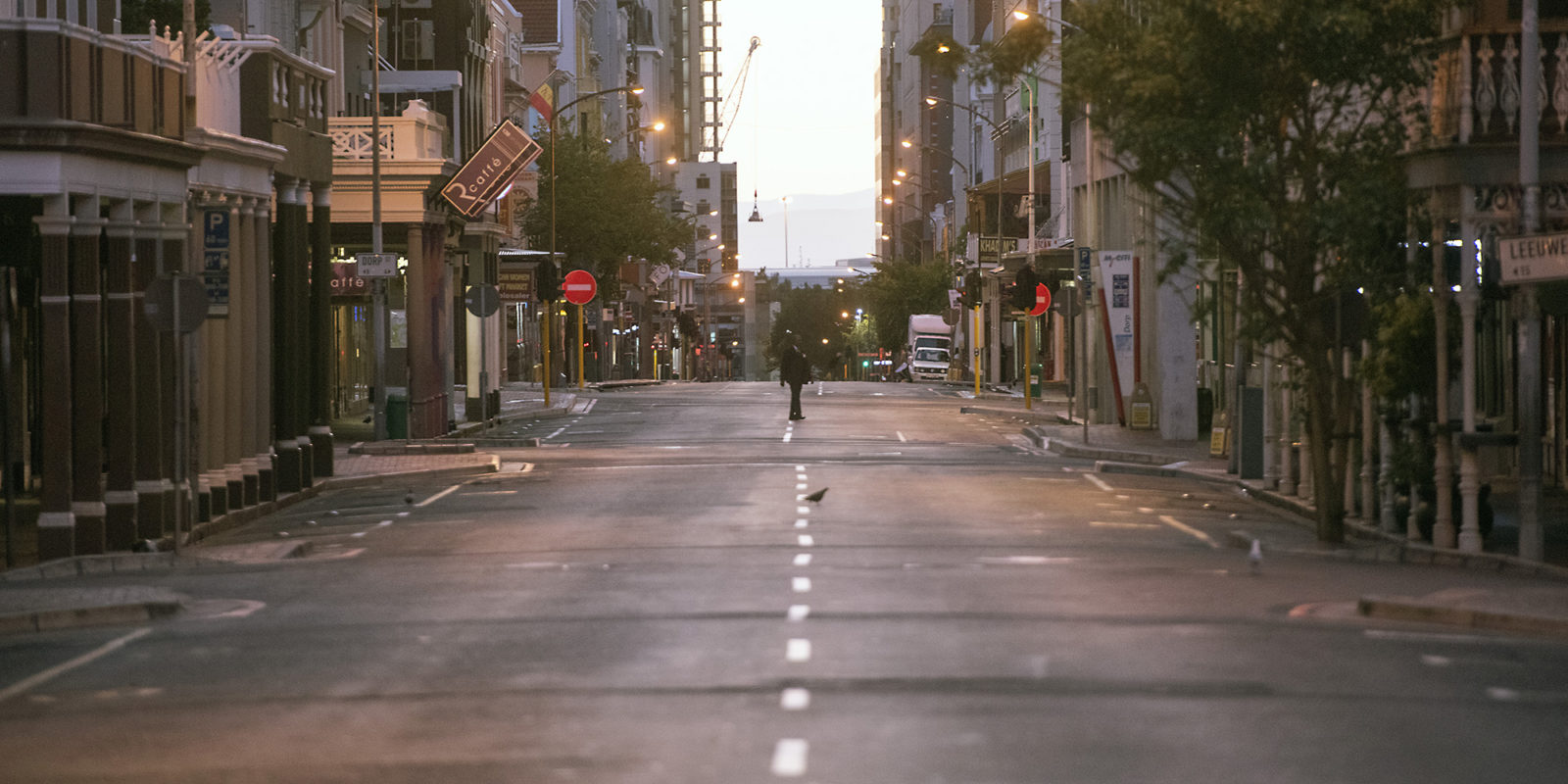 Collective action networks have sprung up in more than 70 suburbs of Cape Town. They are an effort by neighbourhood people to care for one another during the Covid-19 pandemic. Pamela Silwana, admin of the Gugulethu CAN, tells how her team is mobilising local resources and pairing with the Sea Point CAN to help hundreds of people in both areas.

I told my story on Daily Maverick less than a month ago. I was then an unemployed mom working as a volunteer for the unemployed movement Organising for Work (OfW). I’m still an unemployed mom, but since last Wednesday my life has changed and I’ve been working night and day with Gugulethu’s Collective Action Network (CAN).

Our CAN is part of Cape Town Together, a huge neighbourhood organising effort designed to keep the people of Cape Town safe during the Covid-19 pandemic. So far, 70 suburbs (rich and poor) have organised themselves into community groups.

When President Cyril Ramaphosa announced the lockdown, the 21 days sounded like a death sentence for me and other unemployed people. Yes, it was essential to save the lives of many thousands of elderly and immuno-compromised South Africans, but his plan to deal with problems was to give money to businesses, to employees and, at some point, to informal businesses.

There seemed to be nothing for us, the 10 million unemployed. We were expected to stay at home with empty cupboards. The word “unemployed” did not appear in his speech. He mentioned a Solidarity Fund that would have to cover all sorts of “disruptions” in our lives. But there was no clear emergency plan for food security; not in the townships and not for the poor and unemployed across the rest of the country.

In my community, most of our homes consist of more than just parents and children. There are 12 of us in my house. It’s me, my three children, my sister, my brother, my mother, my stepfather, my cousin and her husband and their two children. There are four of us sleeping in each room. We have a shack at the back to give us a little more space.

My brother works at Pick n Pay in Century City and my cousin’s husband works for Woolworths in Sunset Beach. At least they are earning at the moment, having to go to work as essential staff. We worry that while they are out they will contract the virus and bring it back to Gugulethu.

My mother sells funeral insurance and gets paid only commission. She will not be able to work during the lockdown and doesn’t know how she will pay her debts.

We have someone renting our garage as a barbershop. Since my stepfather was retrenched, lawyers for the bank have been threatening to take possession of our house. Rental income from our garage goes towards keeping the roof over our heads.

Despite this, we are lucky in our house. Most people I know in Gugulethu live in less fortunate circumstances.

Launching a Collective Action Network (CAN) in Gugulethu

Our unemployed movement got wholeheartedly behind the Cape Town Together project and encouraged all its 2,000 members and over 100 volunteers across the Cape Flats to join local CANs or set them up. Many have done just that.

It became clear that this new initiative had enormous potential to organise people in neighbourhoods locally to take care of each other through the pandemic. It could also reach out across Cape Town’s spatial divide.

Less financially well-resourced CANs, such as those in Khayelitsha, Lavender Hill, Mitchells Plain and Masiphumelele, had their organising efforts made a little easier by sometimes distant CANs in wealthier parts of town. Phone data was sent to keep people communicating, soaps and detergents were bought in large quantities, handwashing stations were set up.

Growing numbers of people were receiving and circulating accurate information. Fake news and scams were being corrected.

On 24 March, I filled out the sign-on form to Cape Town Together, got our WhatsApp group onto their system and started telling people about what was happening. It was two days before the lockdown.

Our CAN approached our ward councillor’s office. We met several people connected to it, but they didn’t get why our CAN could be helpful. We had no funding and were seen as “just” mobilising our own resources. While mobilising among ourselves is the primary purpose of CANs, the cross-suburb networking did spark the hope that Capetonians might reach out across town in an unprecedented way to stand up to history in this crisis.

Not letting ourselves lose hope, we identified what our challenges were likely to be during the lockdown. At the top of the list was food for everyone and running water in the informal settlements. Then it was soap and toilet paper. We had no funding so we started calling and walking around locally for help.

Some people had managed to prepare for their own needs and others who might have been able to assist us were closing up. We contacted our ward councillor again who told us there wasn’t a specific plan for her ward. She said the only resource she had was R500 food parcels for children, the elderly and the sick.

I was worried by how little information my councillor had at that point and, by the end of our first day working on our CAN, I was beginning to lose hope.

The breakthrough came Tuesday evening, less than 36 hours before the lockdown. OfW informed us that the Sea Point CAN was going to pair with us. They wanted to help get our part of Gugulethu a little better prepared. Keren Ben Ze’ev, one of the OfW directors, is a member of the Sea Point CAN and had proposed at their meeting that afternoon that they create an official pairing with Gugulethu.

The idea was to do as much as possible before the lockdown but then also to form a pairing of our two neighbourhoods throughout the 21 days and beyond. The Sea Point CAN was already taking various actions to assist Ahmed Kathrada House and to ensure that the homeless and vulnerable of Sea Point and Green Point had better care. They had also used their resources along with Tokai and Plumstead CANs, financial and social, to assist Khayelitsha and Lavender Hill.

The next morning, the last day before lockdown, Sea Point started to assist us vigorously. We received hundreds of litres of water for Barcelona and Kanana, the informal settlements near my house. We also received well-mixed soapy water and water containers. Following the starter pack document Cape Town Together sends all the CANs, we made “tippy taps” that can be tipped with a foot so that your hands don’t make contact with the device. We handed out flyers and did an education drive on how to prevent Covid-19 infection.

Sea Point CAN has continued to send an Uber driver they’ve employed to deliver water to our informal settlements and, we understand, to other parts of the city. He has to keep to the virus precautions and has been stopped by the police, but he appears undeterred.

By now, our Gugulethu CAN team consists of me, four members of my family (my mom, dad, sister and cousin), five OfW volunteers and members and a growing list of friends, social workers and church leaders. Safety and security in the City of Cape Town, as well as the Western Cape government, have opened a channel of communication with our CAN.

It has, for the first days of the pairing, been Sea Point mobilising its kindness, energy, time and financial resources towards helping us. However, as the pairing develops, Gugulethu hopes to be able to return their kindness in many ways, including through skills and experience in community organising that we have gained through having to deal with frequent local crises.

Of course, we are working in a small part of Gugulethu and there is an enormous amount of work still to be done to keep everyone safe and food and water secure. We are currently in the process of making contact with the local orphanages and an increasing number of people in need in our area.

There are 12 CAN pairings like ours and the number is growing. The others are Site B (Khayelitsha) with Constantia, Rondebosch with Bonteheuwel, Tamboerskloof with Zwelitsha (Khayelitsha), Mfuleni with Observatory, Khayelitsha informal settlements with Vredehoek, Plumstead with Lavender Hill, Nyanga with Gardens, Langa with Claremont, Pinelands with Kensington, Hout Bay/Noordhoek with Masiphumelele and Newlands with Philippi.

The work our CAN team has done, assisted by Sea Point, has benefited hundreds of people in Gugulethu. But we, like so many in South Africa, are still in dire need of emergency assistance from the government. As we all know, this crisis has only just begun.

While I struggle to sleep at night knowing that people around us have no food, being part of Cape Town Together is at least letting me dream of the possibility of a different future. It has shown me that parts of Cape Town distant from Gugulethu physically and financially can be my community too.

Ultimately, I do wonder how our president sleeps at night. His lockdown plan gave immediate help to a minority of our population, leaving the majority with just vague plans and a promise of solidarity from insufficient privately raised funds.

It is left to us now at Cape Town Together and the many other under-resourced people and organisations around the country to care for the millions of unemployed, informally and casually employed families.

Here is a lesson the president will hopefully one day learn: while enormous challenges like this virus and our history have demanded that we live at a physical distance, they can only be overcome by standing together. DM/MC

Pamela Silwana is a volunteer staff member at the Gugulethu branch of the unemployed movement, Organising for Work. She has been a peer facilitator at the National Youth Development Agency and Khulisa Social Solutions, has done fieldwork and admin for UCT and University of Stellenbosch. She does occasional tutoring and childcare work, but is currently unemployed. You can reach her on [email protected]