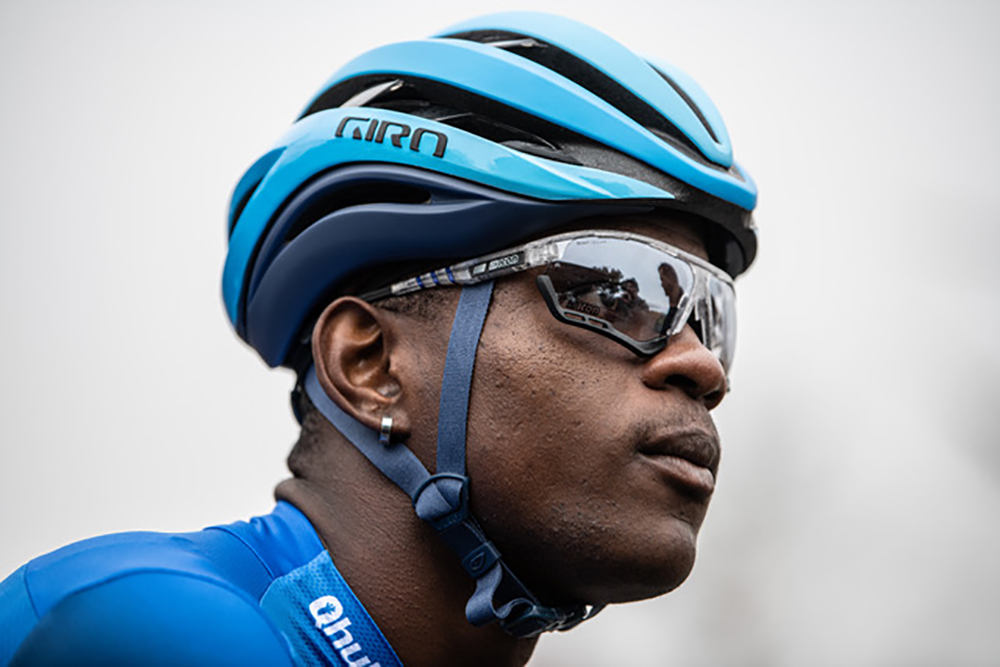 Nic Dlamini is back on his bike in full training as he continues to make his comeback after breaking his arm at the end of 2019. Yet to race this year, Nic recently received the important all-clear to return to riding outdoors from his team’s medical department.

If 24-year-old cyclist Nic Dlamini thought 2020 would be challenging after he was assaulted by National Parks rangers on Table Mountain in late 2019, he was not wrong.

Dlamini has instituted legal proceedings against the South African National Parks (SANParks) rangers who forced him off his bike during a training ride on the slopes of Table Mountain. In the fracas Dlamini’s arm was broken, which wiped out the first three months of his 2020 season.

As it turned out that was a minor setback compared with the global outbreak of coronavirus. The pandemic has virtually brought economies to a standstill and professional sport has been one of its biggest victims. Almost no event, match, league or race is continuing anywhere on the globe as governments try to slow the spread of the virus. Cycling has been one of the big victims.

May’s Giro d’Italia, the first of the season’s three Grand Tours, has been postponed because of the impact of coronavirus in Italy. That country has suffered more than 10,000 deaths due to Covid-19 and is still in lockdown. Other big races have also been postponed and there is still a huge question mark over whether the 2020 Tour de France will go ahead. The Tour is cycling’s biggest event and the focal point of the season for every elite pro team. But France has had more than 37,000 positive Covid-19 tests and 2,314 deaths as of Sunday morning.

Dlamini is part of the South African-owned NTT Pro Cycling team and was in line to make his Tour de France debut in 2020. The broken arm had already put him on the back foot to force his way into team selection and now the coronavirus has left organisers in a desperate waiting game to see if the July spectacle can go ahead.

Dlamini is in the Netherlands where there is no lockdown, but social distancing is part of the daily routine.

“It’s [coronavirus] quite a big thing obviously [in Holland] and everyone is aware of it. I’ve just been trying not to touch anything as I go about my daily routine and I’ve also been training on my own,” Dlamini told NTT’s official website.

“In Holland at the moment you are still permitted to train outdoors, but obviously it’s better if you train alone. I also keep a distance when going to the shops and things like that.

“It was a phenomenal feeling [to be back riding outdoors]. I’ve trained indoors for 10 weeks and that was more than enough! I was really looking forward to getting outdoors and just spending time on my bike, taking in the view and getting some fresh air for a bit. I had been waiting for that day for a long time and it finally came.

“If I didn’t break my arm late last year I would have been in really good shape at the moment and would have done a couple of races. That’s obviously not the case, but I’m still motivated to get better and see what I’ve learnt from the Vuelta Espana last year. From everything that I learnt last year I’ll be able to be there in the finals [of races] and basically put up a great fight and get results. That’s one of the things that I’m really looking forward to this year when the racing resumes.”

Team principal Doug Ryder said that Dlamini had a good chance of making his Tour de France debut in 2020, having competed in his first Grand Tour at the Vuelta Espana in 2019.

Ryder is optimistic that Dlamini’s time will come, but he was cautious in his assessment that the kid from Khayelitsha would be ready for the 2020 Tour de France — even if it did somehow go ahead — because of the broken arm setback.

“Nic has been with the NTT programme since he was 16 and he’s really an amazing guy,” Ryder told Daily Maverick. “He came to our training base in Potchefstroom and did his matric through us and he’s been with us for six years.

“In that time, he has really grown to the point where he made our team for the Vuelta last season. Unfortunately, this whole SANParks debacle in December last year has really set him back. It set his training back by more than two months.

“He’s involved in a civil case around that so we can’t say much more, but it will take some time to resolve. In the meantime, Nic has been training and trying to get strong because he is on the shortlist for the Tour de France. He was also eyeing the Olympic Games, but it’s all a question of whether these events actually go ahead this year [this interview was done before the 2020 Tokyo Olympics were postponed to 2021].

“Our cut-off for the Tour de France selection is about 72 hours before it starts. We have a larger squad of about 13-14 riders in contention for the nine places. The route determines the riders we choose and we make the announcement as close as possible to the Tour because riders could suffer injuries. I hope Nic can be in shape to be considered.”

That’s a big if, considering the Tour de France is highly unlikely to go ahead if the current spread and trajectory of the pandemic continues.

For Dlamini though the Olympic Games postponement is to his advantage considering his relative lack of training due to the injury.

“The broken arm happened at a weird time. I knew that the Olympics were in a few months’ time so my goal was to try and get back and to make it for selection,” Dlamini said.

“To ride the Olympics has always been a dream of mine and representing South Africa would be a big achievement for me, to wear the colours with pride and do a good job. Now that they are postponed it gives me more time to better prepare. I wasn’t quite sure or super confident what my fitness would be like in June, but now that the Games are in 2021, I know that I have a lot of time to prepare and get myself in good condition for the Olympics.

“With the coronavirus and with the readjustment of the calendar it plays into my hands as well, so in a way I have a lot of time to prepare and I don’t have to keep playing catch-up. When racing resumes I’ll pretty much be on the same level as everyone.

“I’m still super motivated and I can’t really wait to get back on the starting line and get to race and put up a good show. I really love the Critérium du Dauphiné [an eight-day stage race near the French Alps every June] for some reason, it’s really a nice race and the atmosphere is amazing. I’d really like to do it again this year and obviously I’d love to do a Grand Tour again this year and use everything that I learnt in last year’s Grand Tour (Vuelta).” DM