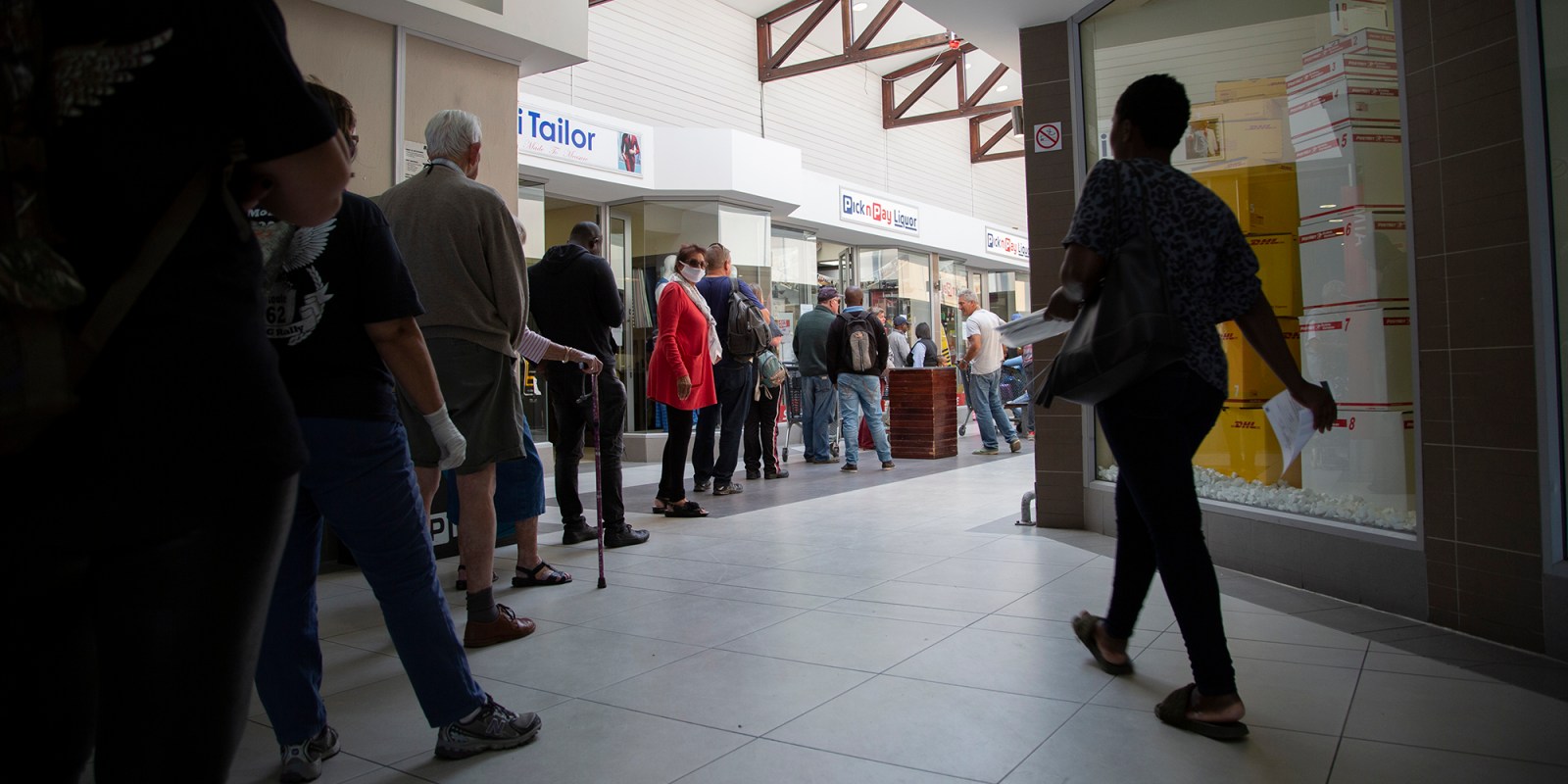 Shoppers do some last-minute liquor shopping in Fish Hoek, Cape Town, hours before the government imposed lockdown for 21 days on Thursday 26 March 2020 to help prevent the spread of Covid-19. (Photo: Leila Dougan)

The blanket prohibition on the sale of alcohol during the Covid-19 lockdown has raised serious concerns among mental health professionals of the risks associated with the sudden and unsupported withdrawal of addictive substances, particularly alcohol.

South Africa is a country ranked by the World Health Organisation as the fifth highest in the world when it comes to alcohol consumption. We are a country of heavy drinkers and substance abusers, and the prohibition on the sale of alcohol during lockdown has raised serious concerns among mental health professionals.

According to a 2018 study, in 2015, 62,300 South African adults died from alcohol-attributable causes with 60% of the deaths occurring in low-income communities.

Alcoholism and substance abuse, across the globe, is regarded as a disease and in South Africa, it is one of “epic” proportions. Those in the public health sector witness how this is intricately linked to socio-economic conditions.

It is with this in mind that mental health professionals in the public sector have sounded the alarm in the wake of the total ban on the sale of alcohol during South Africa’s lockdown.

Forcing alcoholics, particularly, to go “cold turkey” can be life-threatening, could lead to serious depression and suicide as well as contribute to potential violence.

Minister of Police Bheki Cele, during the security ministerial briefing on 25 March 2020, blithely stated: “For 21 days, please stay sober.” During the lockdown, all bars and liquor stores will be closed, and supermarkets will not be allowed to sell alcohol.

The ban on alcohol, particularly in places such as shebeens, taverns, bars, clubs and restaurants is a well-intentioned attempt to minimise social contact as well as risky, or anti-social behaviour associated with alcohol consumption.

However, warned one psychologist in the public sector: “Cutting cold turkey can kill you. In addition, the level of deprivation in townships is high and with basic needs insecure, this is a recipe for disaster. Deprive people of this and we are asking for a spike in aggression.”

Medical professionals for the past 20 years have accepted that alcohol and drug addiction is a “chronic, relapsing disease that results from the prolonged effects of drugs on the brain”.

Scientist Dr Alan Leshner, director of the US National Institute on Drug Abuse (NIDA), has noted that “as with many other brain diseases, addiction has embedded behavioural and social-context aspects that are important parts of the disorder itself”.

Addiction has to be recognised as “a chronic, relapsing brain disorder characterised by compulsive drug-seeking”.

While South Africa will, as of midnight 26 March 2020, prohibit the sale of all alcohol, other countries, like New Zealand and the UK, all facing a Covid-19 lockdown, have tweaked rules and have allowed the limited purchase of alcohol.

The UK government, after an initial ban on the sale of alcohol during the lockdown, has since allowed off-license premises to continue operating.

In France, after an outcry, authorities in the north of the country have temporarily lifted the ban “to consult more widely”.

The Southern African Alcohol Policy Alliance in South Africa (SAAPA SA), a network of organisations, has issued a statement welcoming the lockdown regulations with regard to halting the spread of Covid-19, but warns of  “unintended consequences”.

“The one is that people who are heavy drinkers, or alcoholics could drink other substances as a substitute for alcohol,” SAAPA SA warned in a statement.

SAAPSA has urged the government to “offer relief services to such people”, but stopped short of asking for a relaxation of regulations.

The network has also expressed concern that the ban on gatherings will result in recovering alcoholics not being able to attend vital AA meetings.

While Cele had warned that anyone transporting liquor would face charges, there was “no doubt that some people will attempt to circumvent the regulations and we urge government to put steps in place to minimise such occurrences,” said SAAPA SA.

SAAPA SA said that alcohol “reduces a person’s ability to exercise the social distancing and personal hygiene required to limit the spread of the virus from person to person”.

Covid-19 “is most dangerous for people who do not have strong immune systems … but it must be understood that liquor affects the immune system of those who use it, even those who are young and healthy”.

While the ban, not only in South Africa, is supposedly aimed at limiting “the possibility of an increase in incidents of domestic violence”, some have warned it might have the reverse effect, particularly in those heavily addicted and who are deprived of alcohol.

Alcohol Use Disorder (AUD) is a recent DSM-5 (Diagnostic and Statistical Manual of Mental Disorders, which defines and classifies mental disorders in order to improve diagnoses, treatment and research)classification.

AUDs are, according to studies, “among the most prevalent mental disorders worldwide”. They are also “highly disabling and associated with many physical and psychiatric comorbidities”.

As is the case in other countries and cities facing the magnitude of this global, lethal pandemic, various regulations are bound to be tweaked and managed as society settles down to three weeks of total lockdown. DM