Small Business Development Minister Khumbudzo Ntshavheni has claimed that there will be no racial requirement for small business support as a result of the national shutdown and that this claim was ‘fake news’. But a range of questions still needs answers.

It’s common cause that one of the biggest problems in the 21-day lockdown that begins at midnight tonight (Thursday 26 March) to combat the spread of Covid-19 will be the survival of small businesses. Small businesses, especially in SA, have limited balance sheets and only marginal access to finance.

Consequently, the Department of Small Business Development (DSBD) – which has up till now been a minor outpost in government – has suddenly got a huge, crucial job on its hands: to try to save as many small businesses as possible in what is likely to be a massive economic contraction. Thousands of small businesses will most likely go bankrupt over the next few weeks, and possibly hundreds of thousands of employees will be retrenched. Many have already been let go.

Speed is obviously a priority, so President Cyril Ramaphosa on Monday night said the DSBD would make more than R500-million available immediately to assist small and medium enterprises that are in distress “through a simplified application process”.

That simplified application process was widely distributed on social media on Tuesday morning, and many small businesses were horrified at what they saw because it apparently included the stipulation that the government would only assist businesses that are 51% black-owned. More than that, it said the beneficiaries had to be 100% South African citizens, and 70% of the staff have to be South African citizens.

The department’s website then crashed. No explanation was given but it could have been because so many small businesses were trying to find out if the rumours were true. Small business organisations were inundated with inquiries, and business owners said they had just instantly given up, assuming they wouldn’t be helped. Remgro chairman Johann Rupert, who intends donating R1-billion to assist small business, quickly said on Twitter that his donation would be available to all South Africans.

The document was later in the day disowned by the department as a “draft document” prepared “over a week ago in the Department and is still under revision”, and it was not meant to be shared with the public. 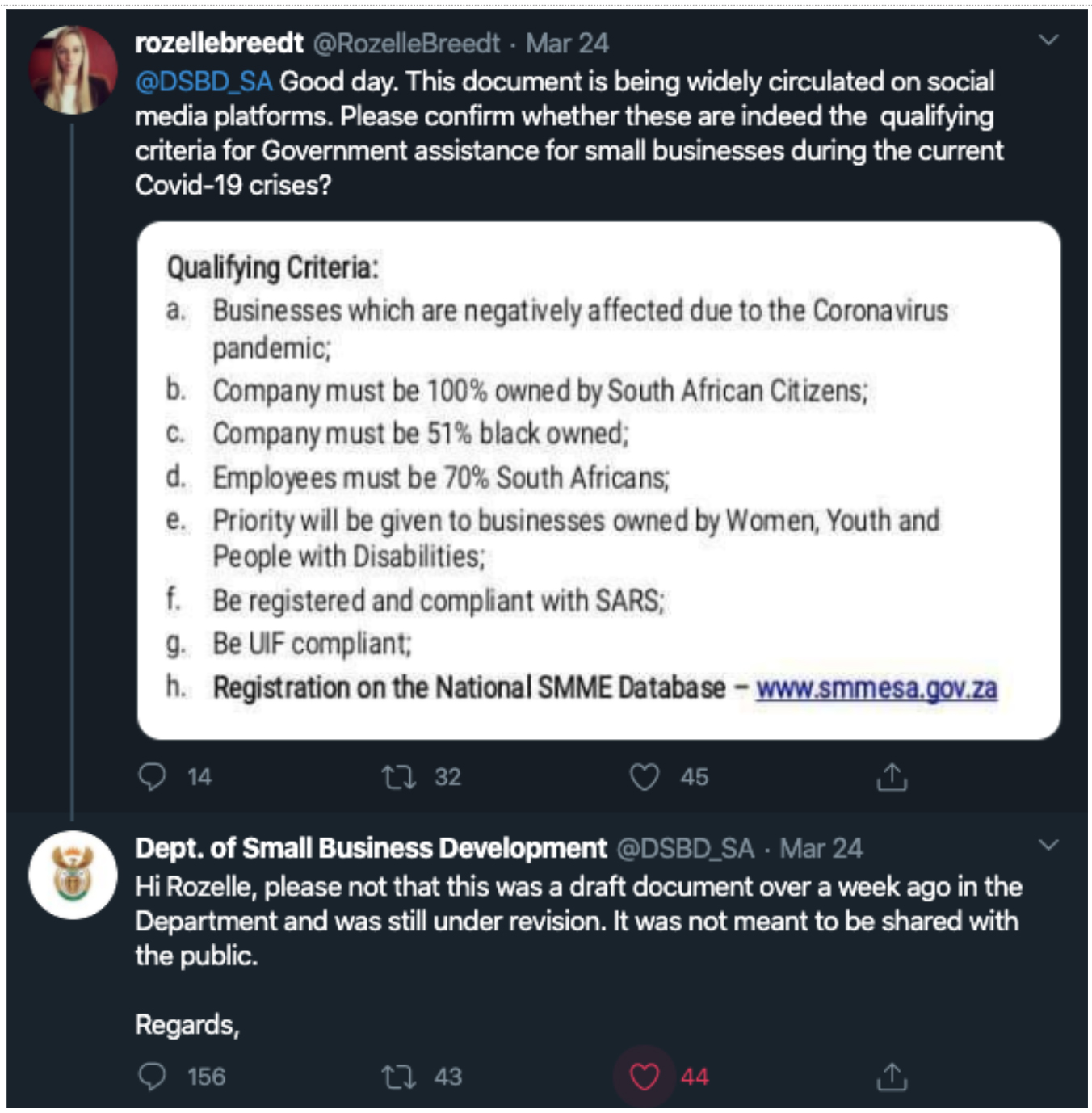 But the problem is that the evidence suggests this is not true. An analysis of the header field – a hidden but examinable part of most documents – shows it was written by Nthuseni Ratshisindi, oddly the deputy director: Strategic Planning at Department of Energy; it was in originated on March 23, and that it was written on computers of the Small Business Department. It is important to note that header fields can be changed, but the DSBD has, in this case, acknowledged that the document did emanate from it. 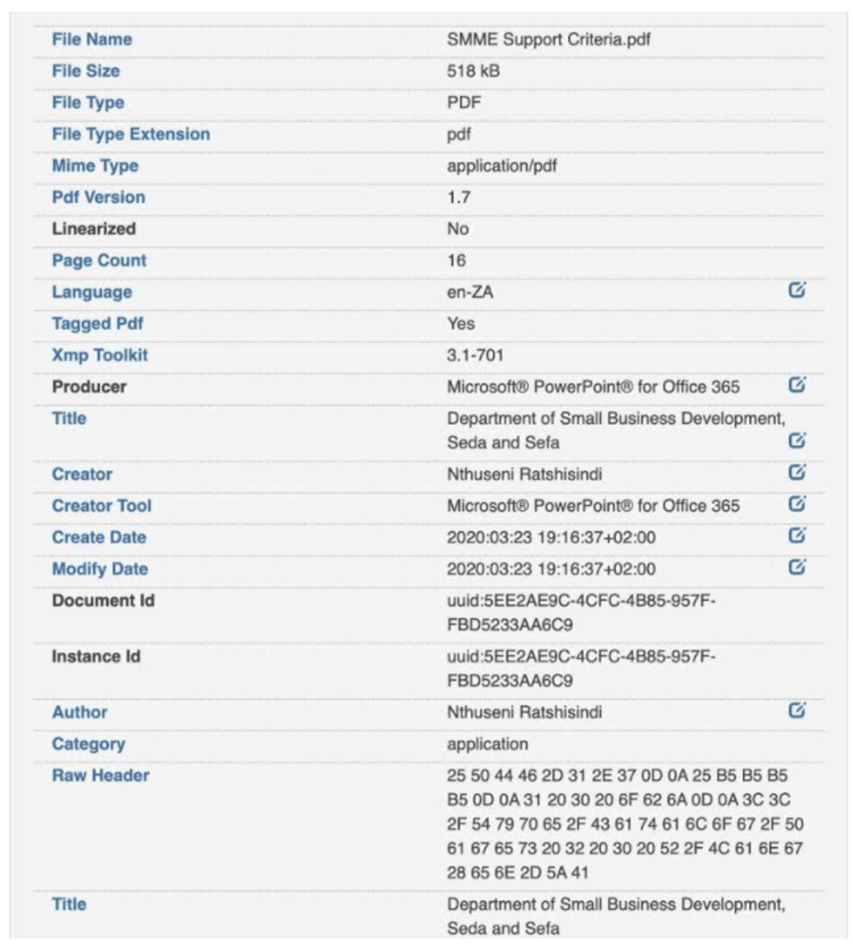 Furthermore, opposition politicians said on Twitter that the exclusion of non-BEE-compliant small businesses had been presented to parliamentarians as a stipulation the department intended to include in its requirements.

Although the document has been rejected, it’s worth noting that the actual application documents that continue to appear on the DSBD website require applicants to specify the race, nationality and gender of employees, and the race of all the shareholders individually. These are all required fields.

It is not clear what, if anything, these requirements might mean; questions to the department about how these stipulations will be applied have gone unanswered. The somewhat vague explanations from Ntshavheni in press interviews suggest applications will be considered on a “case by case basis”, suggesting that BEE and local ownership criteria might still be applied, but more surreptitiously.

What Ntshavheni has remained adamant about, however, is that companies will have to register, and will have to be tax compliant, although she says the department will assist in that process. They will also have to provide a whole host of other business information, like turnover, staffing, as well as bank statements and UIF data. The overall impression is one of intense bureaucracy.

For organisations like AfriForum, these requirements are outrageous, racially prescriptive and illegitimate. But, in fairness to the department, BEE is a foundation policy of government, democratically endorsed by South African voters. Including BEE in supporting business might be questionable from a practical point of view, but it is hardly illegitimate.

The question, however, is whether, in the circumstances of a crisis like Covid-19, the government should be applying its transformation policy to what is essentially a national emergency. The fact is that a huge number of small businesses, perhaps even the majority of registered businesses, are minority-owned or foreign-owned, but have high proportions of black employees. If the government does intend to try to help small business employees, this may be the wrong time to attempt to throw in its transformational goals.

Since becoming a minister, Ntshavheni has focused on two things: developing a database of small businesses and supporting, first and foremost, black businesses. Her antipathy toward foreign-owned businesses has been palpable in many of her public statements.

The issue of foreign-owned businesses is also tricky in the Covid-19 lockdown, since many foreign-owned spaza shops, for example, do employ South Africans. They also provide credit to local citizens.

Excluding them could also be categorised under the heading of allowing ideological considerations to overwhelm the more pressing practical issue of keeping small business alive during the lockdown.

And there is another issue too: it is now a criminal offence to spread fake news about the Covid-19 crisis. But what happens when a minister claims a news item is “fake” when the evidence suggests it is not? The habit of calling the truth “fake”, particularly by politicians embarrassed by a leaked document, is now an international phenomenon.

But in SA, there is a difference: the faking of news regarding the crisis is a criminal offence. BM