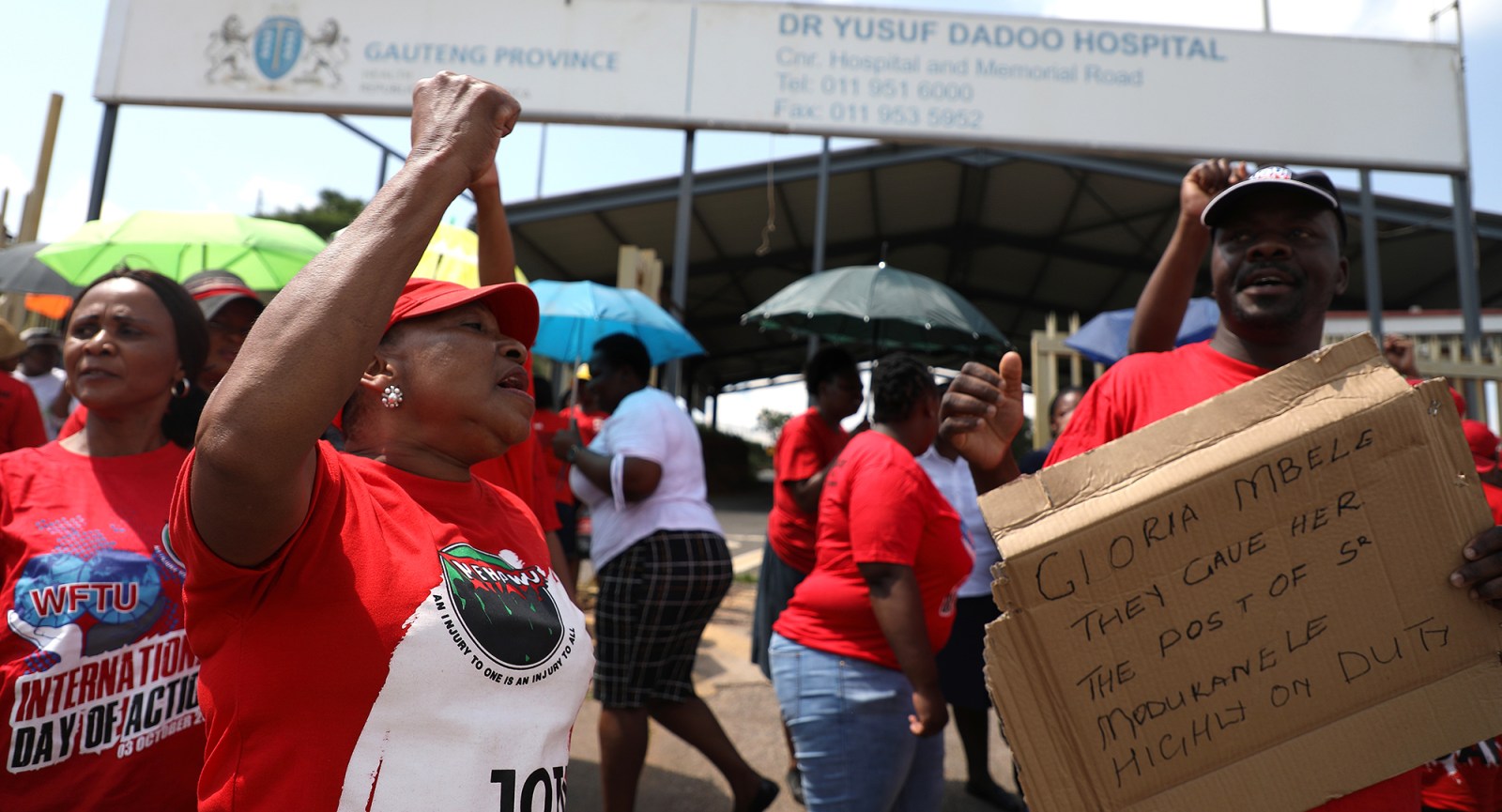 Trade unions are now threatening to take to the streets and launch court action after the government pleaded poverty on Tuesday and proposed reneging on an agreement by not paying public servants a wage increase in 2020/21. (Photo: Gallo Images / Sowetan / Thulani Mbele)

Public sector unions have threatened to take to the streets and launch legal action after the government proposed a 0% wage increase for public servants in 2020/21, reneging on an existing agreement. Cutting the public sector wage bill is crucial to Finance Minister Tito Mboweni’s efforts to reduce expenditure, but the unions are ready for a fight.

“We recognise and appreciate the commitment shown by labour unions throughout the negotiations process, and we commit ourselves to fully implement the agreement,” said Dlodlo.

Trade unions are now threatening to take to the streets and launch court action after the government pleaded poverty in the Public Service Coordinating Bargaining Council (PSCBC) on Tuesday and proposed reneging on the final year of that agreement by not paying public servants a wage increase in 2020/21.

According to the 2018 deal, public workers in levels one to seven would receive increases this year matched to the consumer price index (CPI) plus 1%, levels eight to 10 would get CPI plus 0.5% and levels 11 and 12 would receive CPI linked increases. CPI is sitting around 4.4%, meaning the government would have to pay between 4.4% and 5.5% increases.

Those increases were due to be paid on 1 April but according to trade unions, the government told the PSCBC on Tuesday it wants to freeze wages for the year in an effort to slash expenditure and reduce debt, in line with Finance Minister Tito Mboweni’s Budget speech.

“The reneging of government on the full implementation of the wage agreement constitutes a frontal attack on workers and their hard-won gains. Nehawu has always maintained that any intention to disregard collective bargaining is a declaration of war,” said a statement from the National Education, Health and Allied Workers’ Union (Nehawu) on Wednesday.

The union said wage agreements are “sacrosanct” and it has instructed its members to prepare for a national day of action on 30 March 2019. The union has threatened to defy the ban of gatherings of over 100 people during the state of disaster, instituted to reduce the spread of Covid-19, and organise public marches.

“Our members must not be punished for the economic crisis they have not created while government dismally fails to impose austerity on the pay and privileges enjoyed by executives and directors,” said Nehawu.

In February, Mboweni announced plans to cut the public sector wage bill, which has increased significantly over the last decade, by R160-billion over three years. Treasury planned to cut the bill by R37.8-billion in the 2020/21 financial year.

Rating agency Moody’s, as well as critics, questioned whether the government would be able to implement its plan in the face of resistance from unions.

The outbreak of Covid-19, and measures implemented to limit its spread, are expected to further weaken the economy as well as further burden the already-constrained fiscus, in all likelihood making it even more crucial, from the government’s point of view, to reduce the public wage bill.

The government had reportedly previously offered unions a 1.5% nominal increase, far below inflation, before dropping its offer to 0%.

Mchunu’s spokesperson Vukani Mbhele declined to comment on Wednesday while negotiations at the PSCBC continue, but the government is likely to face a legal challenge if it fails to reach a wage agreement and refuses to implement the existing deal.

PSCBC general secretary Frikkie de Bruin has explained that the government is bound by the existing agreement and the PSCBC would intervene if it fails to comply. If the state ignored an enforcement order, unions could go to court to ensure the agreement is upheld.

“The PSA will not hesitate to enforce the collective agreement through litigation processes,” said the Public Servants’ Association in a statement on Wednesday, claiming the state was targeting workers’ salaries while failing to curb irregular and wasteful expenditure.

“The PSA has previously warned of the consequences should there be any unilateral deviation from the provisions of the agreement. Failure by government to implement the last leg of the agreement is bound to have dire consequences for the entire country, especially under the current Covid-19 crisis,” it continued.

The DA’s Leon Schreiber said due to the outbreak of Covid-19, Public Service and Administration Minister Senzo Mchunu must instruct Nehawu to cancel its proposed march as it will put its members and the public at risk of contracting Covid-19.

The MP claimed Nehawu was “hellbent on defending” what he claimed were overpaid managers and a bloated public service. Schreiber said the DA would apply for an urgent interdict to stop Nehawu’s march if necessary.

Government’s attempt to review wage increases for 2020/21 will be a crucial first test in the showdown with unions. The next will come in June 2020, when negotiations for a new agreement are set to begin.

Given the current animosity and distrust, it might be more difficult to reach an “amicable agreement” than it was in 2018. DM