Moffie: A brutal and beautiful film of innocence lost 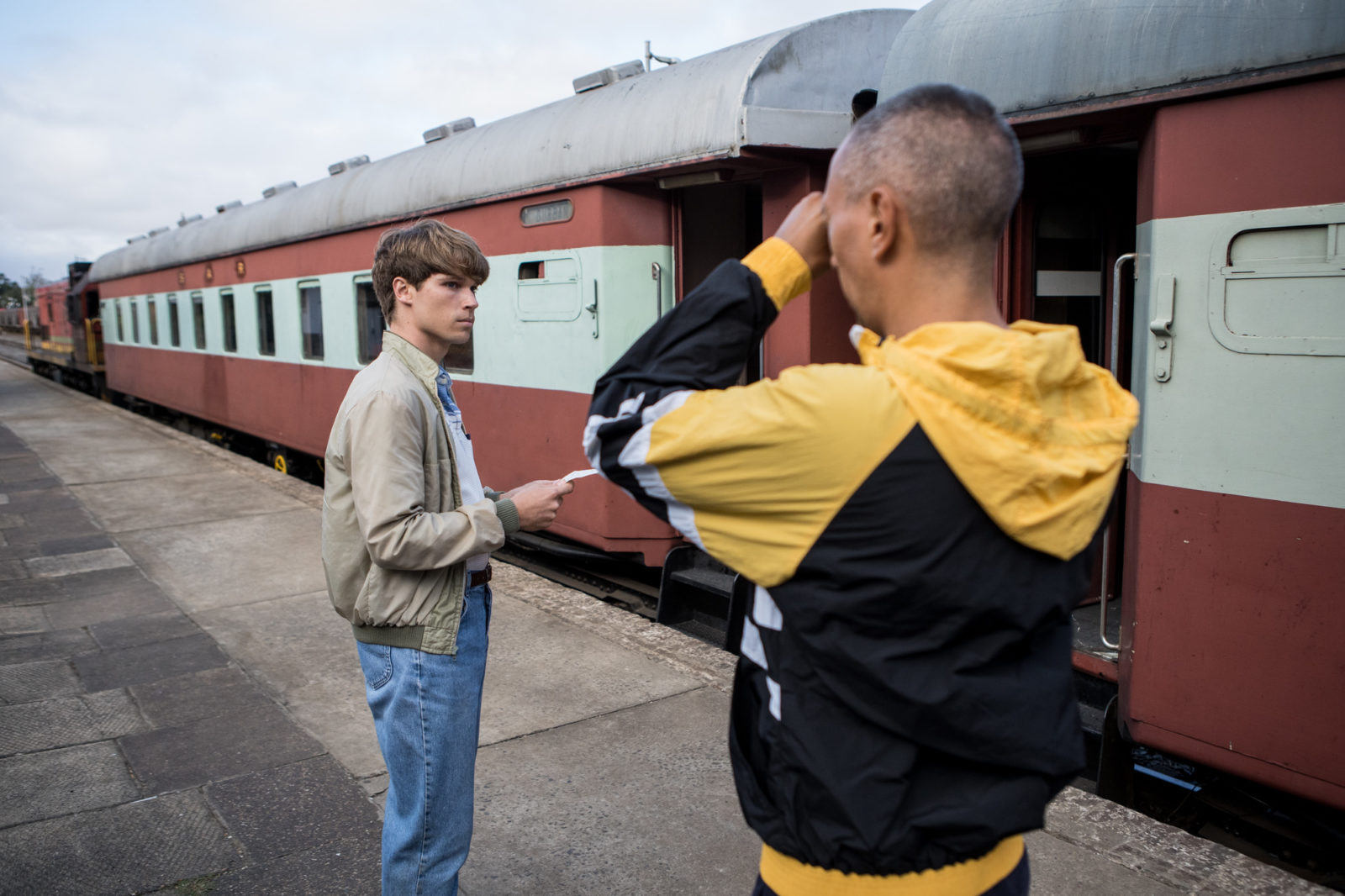 ‘Moffie’ is a scorching film that expresses the unsayable in a world dominated by men programmed to bottle their feelings.

There’s a scene in Moffie, the fourth feature by South African auteur Oliver Hermanus, when – for a brief moment – we’re led to imagine that the film’s unlikeable bully-in-chief (Sergeant Brand, played by Hilton Pelser) is only human after all. For a few silent seconds, we’re given a glimpse of another layer, one that hints that, despite all the cruel tortures he’s meted out and all the verbal abuses and profanities and homophobic slurs he’s uttered, he too possesses something akin to human emotion, even empathy.

In that moment, we’re given reason to imagine that, like the rest of us, he knows pain, understands suffering, and recognises the true horror of war.

This moment follows a sequence towards the end of the film when its protagonist, a fresh-out-of-basics soldier named Nicholas van der Swart (played by Luke Kai Brümmer), has finally seen combat on the Angolan border, and discovered, intimately, what his terrible, terrifying training under the presumably heartless Sergeant Brand has in fact prepared him for.

In this moment, we’re asked to imagine that even this virulent white officer in the apartheid army has some insidious backstory – that he too is a product of the system, that he’s been programmed to hate.

The scene is unnerving, because as Brand squats down alongside shell-shocked Nick (who, hiding behind sunglasses, is presumably under the spell of morphine taken to strip away his own inner pain), there’s a faint flicker of humanity that registers on his face – but, of course, no words come out.

And that’s the whole point of Moffie. That men stay silent; unable to express emotions, they keep their feelings and hurt locked inside. They become prisoners of what they cannot say.

And this repression is no good to anyone. Because, when these men do open their mouths, too often the wrong things come out.

Sometimes – frequently in this film – they say terrible, twisted, very fucked up things. In Moffie, words are continuously blurted out like missiles, targeted to strip away the humanity of those who hear them. “Moffie” – a pejorative term that was pervasive and quite acceptable in the South African lexicon of the 1970s and 1980s – is used again and again to tear down the young recruits it’s used against, serving to emasculate, to belittle and shame them.

Repeatedly we are reminded that, according to this apartheid army’s rules, moffies ­– faggots – are lesser humans. Like communists, terrorists and enemy sympathisers (liberals), “faggotry” (“mofgatheid”) will not be tolerated, and officers like Brand expend much of their energy using this slur as a chastening weapon to keep virgin soldiers in line.

Based on the memoir by André Carl van der Merwe, Moffie makes for hard, relentless viewing. Set in 1981, at the time of the border war with Angola, it’s a rite-of-passage film in which Nick, its gay protagonist, does what he must to survive the hell of basics training, where he’s confronted with blunt racism, systemic homophobia, toxic masculinity and the reprogramming of boys into men capable of killing on behalf of the state.

To create a sense of what it was like, Hermanus strings together depictions of some of the most awful physical and emotional tortures, demeaning insults and shame-mongering ever witnessed in a South African film. Upon arrival at their training camp, the new recruits are told to strip while they are dispossessed of their identity – they are now possessions of the state, they’re told, and are nothing more than “bloody, pus-filled, useless scabs”.

It’s this kind of abuse, executed with sadomasochistic relish, that takes up much of the aforementioned Sergeant Brand’s screen time. His task is to remove from his recruits any inkling of individuality, strip away any lingering humanity. And he will stop at nothing to achieve this imperative. In one scene, he instructs a soldier with a bit of an attitude to ingest his own vomit.

These scenes make the film hard to take: a veritable litany of hardships that are on the one hand reminiscent of films like Full Metal Jacket, and yet are somehow imbued with an even darker undercurrent, hinting at the moral bankruptness of the apartheid system the army exists to protect.

Hermanus explained that with Moffie, he wanted to explore how a particular generation of boys “were militarised and racialised and programmed to hate”. He said he believes these boys were “damaged and traumatised in ways that forced them to become adults in a particular way”.

The point is underscored by the film’s many close-ups of handsome young faces marked with blood and bruises from various acts of casual violence perpetrated by the officers and among the conscripts themselves.

In one scene, they play a modified version of spin the bottle in which, instead of kissing, pairs of conscripts fight one another while the others cheer them on. Violence is their entertainment, a form of currency in which the payoff is a kind of resistance to pain, a denial of feeling.

In one scene on the border, some of the soldiers line up for a pee in the bush and check in on one another. “I feel nothing,” is what they tell each other, driving home the terrible message: in order to become men, this army needs you dehumanised.

Within the broader context of visible human misery is Nick’s quiet, unspoken coming of age saga – alongside his gentle witnessing of the horrors unfolding around him is his own personal journey of self-discovery, kick-started by a series of surreptitious glances hinting at his desire for a tall, broad-shouldered conscript named Dylan Stassen (Ryan de Villiers). Stassen’s one of the few other English-speaking boys in the squad and doesn’t seem to care for the rules – nor for Brand’s ceaseless bullying.

For Nick, this attraction poses the biggest danger of all to his safety, and the film deftly grapples with his conflict and confusion as his longing takes hold. In a key scene in which the squad has been instructed to dig trenches and then stay in them overnight despite the rain, Stassen quietly tells Nick to take off his wet clothes and lie next to him to keep warm. Although nothing happens aside from Stassen gently touching Nick’s cheek, Brümmer’s held intensity is as stirring as it is heart-breaking, his face a cipher for the mute desire that burns within.

Later, having had no outlet, Nick slips into a toilet cubicle to relieve his pent-up craving for physical intimacy – a tight close-up on his face as he masturbates serves as metaphor for secrecy, repressed desire, the loneliness of not being able to talk about one’s feelings.

In fact, for most of the film, Nick’s response when he’s asked about his feelings is a dismissive “I’m fine.” Of course, being “fine” is often the default setting – protection against being found out by blending in. When Nick falls to the ground during a strenuous training exercise and Brand kicks him, he doesn’t complain – he gets back up and continues the exercise. Like so many men, he uses silence and denial as a refuge. Stassen, meanwhile, is somewhat outspoken, willing to act out, and he pushes buttons without even trying. He is – in Brand’s words – “a piece of shit” and his devil-may-care attitude earns him a one-way ticket to the army’s notorious Ward 22, where homosexuals, drug addicts and madmen are subjected to untold terrors.

Whatever it is that is done to Stassen while he is “away”, we can only assume that it’s far worse than what’s experienced under Sergeant Brand. Those who get out of Ward 22 are ghosts of their former selves.

Mercifully, there is sufficient relief from the film’s assault, and while it feels like an emotional flaying, it is immensely beautiful. For one, there is the visual splendour of Jamie D Ramsey’s cinematography – while he captures all the horror and claustrophobia and personal trauma, his portrait-style framing is tantalising and his handheld shooting draws us in powerfully.

And – in the film’s lightest scene – there’s a deliberate homage to the inadvertently homoerotic volleyball scene in Top Gun, where we share Nick’s gaze as he watches his fellow conscripts, shirtless and glistening under the Klein Karoo sun.

There’s a lot that is profoundly excellent in Moffie. Aside from a committed ensemble cast, some of them young men barely out of school with no film experience, Brümmer’s performance is deeply moving. Tender, gentle, restrained, it is also beautifully nuanced. His silent expression of inner euphoria following an unexpected display of affection from Stassen – Nick’s first, life-changing kiss – is among the most exquisite things seen on screen.

And there’s a sublime score by Braam du Toit that at different times amplifies the horror or provides relief from it; Du Toit’s atonal, searing strings are complemented by Charles Ives, Bach and Vivaldi and – finally, during the end credits – give way to a haunting cover version of Rodriguez’s Sugar Man.

By the end of the film, there’s a sense that Hermanus has performed a cinematic sleight of hand, one in which he tricks us into believing that what we’ve seen is not in fact “a gay film” but simply a film about what it is to be human.

Only, it isn’t a trick at all. The real trick was the one in which, for so much of history, societies were hoodwinked into believing that gays were lesser humans. This film addresses a fundamental truth: That we are all human. And that even the Sergeant Brands, the very worst among us, are humans. That we all have a backstory, that we were all – once upon a time – innocents.

Watching this film, you will know this for a fact as you feel your heart ache for the boys on screen. Some of those boys were lost before their lives had even begun. Others lost their innocence, kept their feelings bottled up, and became men with the fate of the world in their hands. And look where we are today. ML

Moffie premiered at the 2019 Venice International Film Festival in September. It released nationwide in South Africa on 13 March and is still been screened – to check updates, go to: https://www.moffiefilm.com/tickets. Director Oliver Hermanus tweeted the following:

Not sure yet what local cinema chains will decide with regard to extreme social distancing, but in the event that SA cinemas close, we’ve custom built a new system over the last few weeks that will let you see MOFFIE from the comfort of your home. More soon! #FlattenTheCurve

Alice Toich and the healing power of art

How to face difficult conversations (Part One)

The workers who make love possible