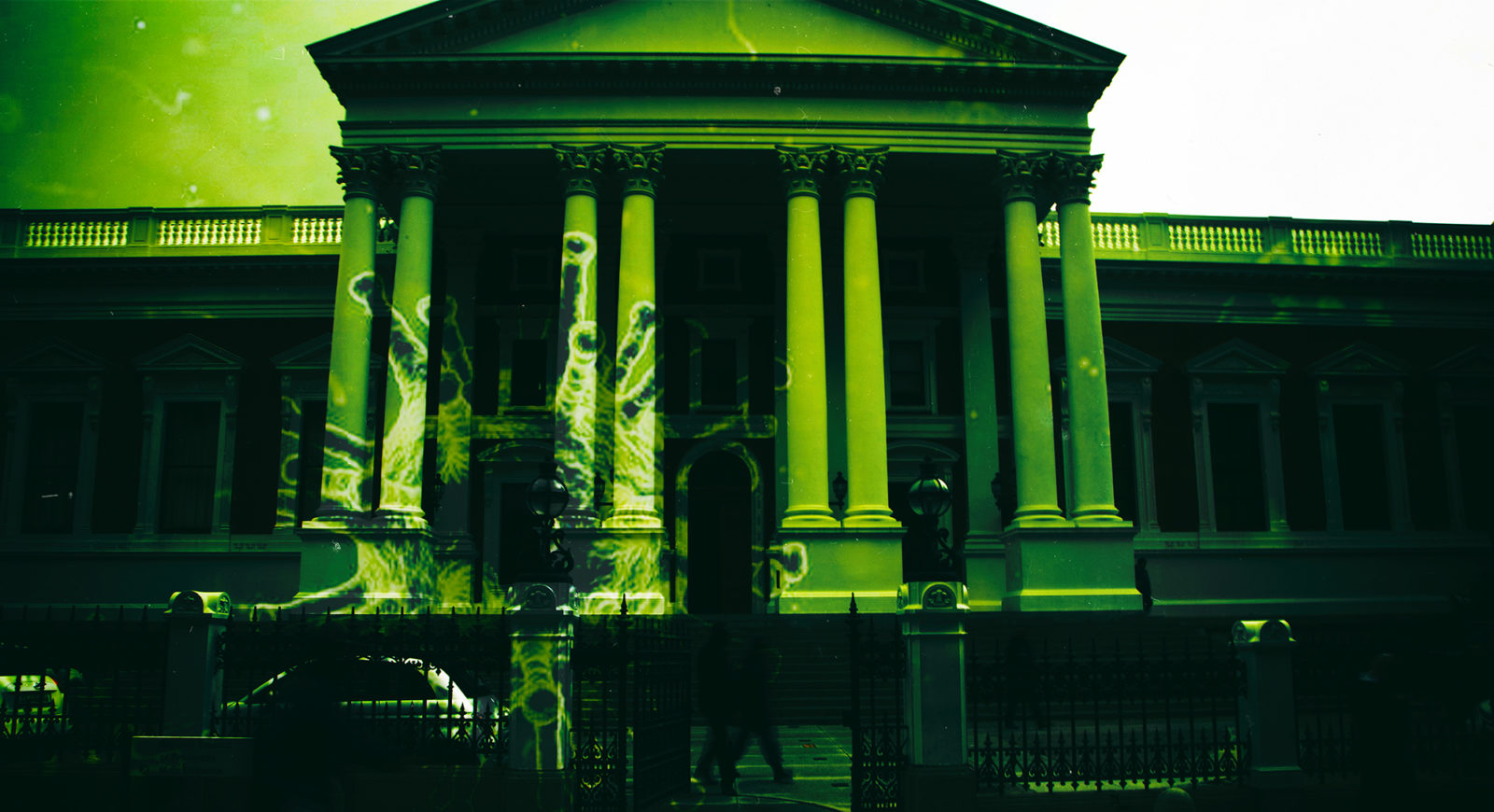 At Parliament on Tuesday, MPs, staff and the occasional Cabinet Minister were spotted in queues waiting to be screened for Covid-19. (Photo: Leila Dougan)

When leaders of political parties meet President Cyril Ramaphosa at Parliament on Wednesday morning, they’ll bring with them suggestions and proposals on fighting Covid-19.

DA interim leader John Steenhuisen is proposing a four-month relief for small businesses on loan payments, rentals, VAT and social savings such as the Unemployment Insurance Fund (UIF) and the Workers’ Compensation Fund. On the health front, the DA said on Tuesday it is looking to have retired healthcare workers return to duty, even if just to staff the Covid-19 hotline.

IFP Chief Whip Narend Singh said the party’s Deputy President Mzamo Buthelezi will submit proposals at the meeting with Ramaphosa such as the need to ensure supplies of clean water in rural areas, and to keep tight control at border posts that have remained open, such as Beit Bridge, where strict screening and hygiene must be implemented.

The Wednesday meeting between Ramaphosa and political party leaders comes as Parliament is readying for what is an effective shut-down over Covid-19.

On Wednesday the National Assembly rises after a short sitting from 11am to pass the Division of Revenue Bill, required so provinces and municipalities get their allocations as announced in February’s Budget. Also on the agenda are the presidential recommendations for salary increases for judges – zero – and for magistrates, ranging from 2.8% to 4.5%.

On Thursday, the NCOP follows suit after concluding its urgent business.

Already on Tuesday, committee meetings had been rescheduled and what last week looked like a busy schedule petered out. The Gauteng report back on the NCOP’s Taking Parliament to the People was cancelled, as were public hearings by the ad hoc committee on amending Section 25 of the Constitution.

By Monday, the first signs of Parliament’s response to the global pandemic emerged: almost overnight hand sanitisers and information leaflets appeared across the parliamentary precinct. And by Tuesday afternoon MPs, staff and the occasional minister were spotted in queues in several places waiting to be screened for Covid-19.

“Parliament will be closed to the public until further notice. Arrangements are also being made to reduce the number of staff members in the precinct in line with the President’s announcement,” said Tuesday’s statement by the national legislature.

Exactly what the options for staff were was not quite clear. With parliamentary business suspended, many staff such as committee secretaries, content advisers or employees in the translation, document and library sections could well work from home.

But, according to the grapevine, an initial offer from Parliament’s administration was simply that staff must take two-weeks leave from their annual holidays.

On Tuesday evening an Info Alert, seen by Daily Maverick, said parliamentary staff may work from home from Friday 20 March until 14 April 2020.

If staff want to take leave during this period, the usual leave provisions applied.

“The working days from 20 March to 14 April will be absorbed by Parliament in line with the state of disaster announcement by the President on the following conditions:

“Staff may also be required to come to the office during this period (sometimes on short notice) for certain business that can not be carried out remotely…” according to the Info Alert.

This accords with communication from the National Education, Health and Allied Workers’ Union (Nehawu), seen by Daily Maverick.

However, that communication also outlines that parliamentary staff who had travelled – for example, those accompanying the Section 25 amendment ad hoc committee on public hearings — would self-quarantine for 14 days: “No leave days required from them…”

Covid-19’s impact on South Africa’s political landscape has been quick, hard-hitting and wide-ranging.

Government events, including national day commemorations such as Human Rights Day on 21 March, have been cancelled as has the presidency interaction with African Union commissioners.

The DA postponed both its policy conference and national elective congress – apparently provisionally to September 2020 and October 2020 respectively.

The ANC postponed its mid-term assessment gathering, the National General Council (NGC), according to a statement issued after Monday’s extended National Working Committee meeting. Also cancelled are provincial conferences such as the repeatedly delayed Mpumalanga ANC conference, and other large gatherings.

Labour federation Cosatu has suspended all shop steward council meetings. The South African Municipal Workers Union (Samwu) on Tuesday announced it was postponing its national congress that had been scheduled for three days from 23 March 2020.

The IFP has called off all large gatherings, including the celebration of the 45th anniversary of its founding on 21 March.

Broadly speaking, there has been a focused and decisive action by the government. From Sunday evening’s presidential address to the nation to Monday’s joint media briefing by a large number of Cabinet ministers to outline steps to action, even to Tuesday’s several ministerial briefings where, however, words were carefully chosen to, for example, not talk of universities shutting down, but phrasing this rather as going on Easter break early.

Covid-19 was also the subject of Tuesday’s statement from the National Economic Development and Labour Council (Nedlac) following its special executive committee meeting.

“Employers and trade unions agreed to work together to manage issues like short time, shift work, changing working hours and lunch breaks to reduce too many workers congregating in one place,” said a rather softly-softly Nedlac statement. “There was an acknowledgement that working from home and using online and technology platforms were important, where possible.”

But it turns out a three-a-side working group of government, labour and business was established to urgently panel beat particularly economic support measures. It will meet again before the end of the week.

Cosatu has called for banks to suspend all bond and loan payments for a month – to be reviewed depending on the Covid-19 crisis – and also for the South African Reserve Bank to drop interest rates by 100 basis points on Thursday to help stimulate South Africa’s already flailing economy, post-Covid-19.

Parks said the discussion on the UIF taking the lead in ensuring economic stimulus in these difficult times had been positive.

“This is a special scenario and the UIF needs to be more aggressive and creative,” he said, adding this would be one area for the three-a-side to work on as changes to the unemployment benefit regimen may be done by ministerial regulations.

The UIF has a positive balance of more than R140-billon.

Under the current regimen, the UIF can be approached if an employer doesn’t pay Covid-19-related special leave, as small businesses are supported under the Temporary Employee Employer Relief Scheme by which UIF effectively takes over paying workers for up to six months.

But the time lag from application to payment, particularly for individuals, can be lengthy. With 60% of workers earning R3,500 a month or less, according to widely accepted statistics, that time lag could well mean the difference between putting food on the table or going hungry.

Government’s co-ordinated push since Sunday’s presidential address to the nation seemed to have started fraying at the edges somewhat.

Tuesday came and went without an update on Covid-19 cases. That absence was noted.

Also noted is the absence of the regulations for the State of National Disaster – three days after its declaration.

Ministers holding media briefings is great for optics – being seen to do things – but while it’s part of statecraft, it’s not governance. The proof of governance will come in delivery to people in South Africa during these times of Covid-19. DM