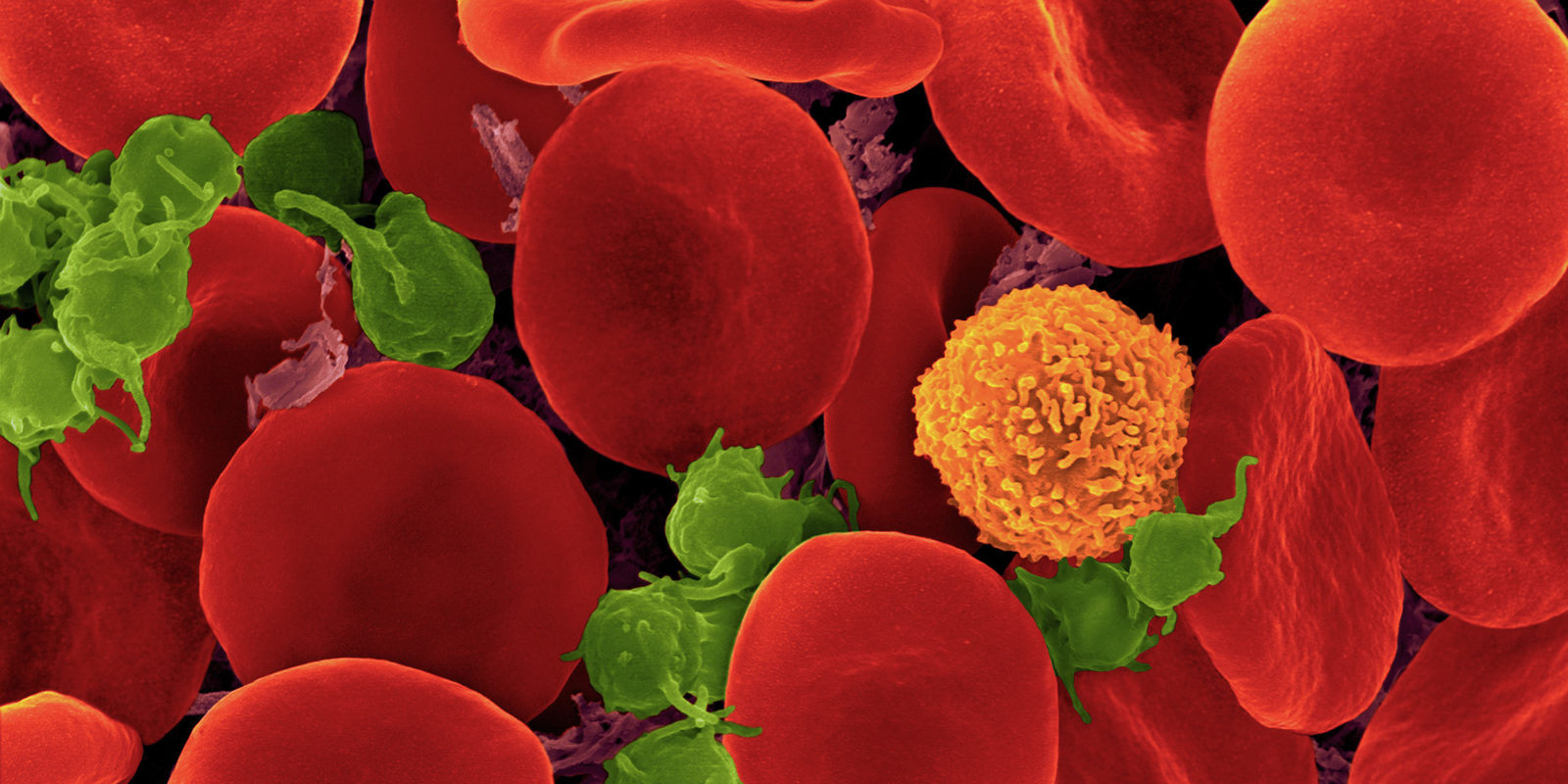 This microscopic look at human blood reveals that nearly half of our blood is composed of red blood cells. These lozenge-shaped cells have the all-important role of delivering oxygen to our tissues. T cells (orange) are an essential part of the immune system. Platelets (green), the smallest blood cells, clump together into clots to stanch bleeding after an injury. Image courtesy of Dennis Kunkel, Dennis Kunkel Microscopy, Inc. Part of the exhibit Life:Magnified by ASCB and NIGMS. Photo: Flickr/ZEISS Microscopy

The second person to undergo a successful stem cell transplant from a donor with an HIV-resistant gene has been cured.

The donor cells used in a stem cell transplant that cured a second man of HIV were from a patient who had a gene defect (called CCR5delta32 mutant) which results in the absence of one of the critical entry gatekeepers that HIV generally needs in order to infect cells. But the reason both people who have now been cured of HIV received the treatment is that both also had lymphoma, for which they received the stem cell treatment.

An additional and positive effect of the transplant is that the virus is unable to replicate in the patient’s body by replacing the patient’s immune cells with those of the donors, while the body irradiation and chemotherapy “targets” any residuals of the HIV virus.

Formerly known as the “London patient”, the man revealed his identity in an interview with the New York Times. He is Adam Castillejo, 40.

The world first learnt of the possibility of the second success in March 2019 when a team of international scientists announced in Nature that it had been 18 months since he had stopped taking his antiviral medication, after treatment. This was the longest HIV remission after stem cell transplantation since the “Berlin patient”.

After 30 months without any antiretroviral treatment, it was announced in the journal The Lancet HIV that there is no active viral infection in the patient’s blood. Castillejo, who is originally from Venezuela, was diagnosed with HIV in 2003 and had been taking antiretroviral therapy since 2012.

Until now only one person in the world, Timothy Ray Brown, known as the “Berlin patient”, has been cured of HIV. Although Brown had traces of HIV, the virus never rebounded. He received similar stem cell treatment.

There is no active viral infection left in Castillejo’s body, though there is some HIV DNA found in tissue samples which experts regard as “fossils” which are unlikely to be capable of reproducing the virus. No active viral infection was detected in samples of the patient’s blood, his cerebrospinal fluid, semen and intestinal and lymph tissue.

Professor Ravindra Kumar Gupta, from the University of Cambridge, and lead author on the study, said in a statement: “We propose that these results represent the second ever case of a patient to be cured of HIV. Our findings show that the success of stem cell transplantation as a cure for HIV, first reported nine years ago in the Berlin patient, can be replicated.

Professor Francois Venter, Divisional Director: Ezintsha within the Reproductive Health and HIV Institute at the University of the Witwatersrand, told Daily Maverick this is not a practical solution for most patients with HIV, but “it helps us a lot in understanding the virus and the immune system, and in future may allow us to find a less toxic cure”.

He said in this process “we essentially change a person’s genetic profile to one that is more resistant to HIV and has more capacity to clear the virus”. The CCR-5 gene is found in certain human cells that allow HIV to enter codes for a portal of entry into the cell – almost like a door. In the people (these specific donors) the gene is slightly mutated (delta32) and it makes it very difficult for the virus to enter the cell. Almost like a locked door.

He added: “We need all of it. A vaccine, better and cheaper drugs, as well as this cure research,” he said.

Professor Caroline Tiemessen, from the School of Pathology at Wits, Head of the Cell Biology Research Laboratory at the National Institute of Communicable Disease, and DST/NRF Chair of HIV Vaccine Translational Research, told Daily Maverick it is important to know that “success stories like that of the Berlin patient are not just a once-off phenomenon”.

Ongoing monitoring that ensures no detection of replication-competent viruses will further reinforce these findings.

The research has been conducted by the IciStem consortium and they are studying many similar patients, she said.

“The findings have provided further support for CCR5 as an important and safe target for combating HIV. This is not new knowledge, but is further evidence, particularly in the stem cell transplantation context. The authors show that the CCR5-positive cells in the recipient are very effectively replaced by CCR5-negative ones from the donor.

“Any form of gene-editing of CCR5 as a more feasible and scalable option for treatment of HIV infection will have to await additional efficacy and safety studies,” she said.

“The war we are waging on HIV can only be won with incremental steps towards that ultimate desired destination of cure – on that journey we need to continue to use the drugs we have to keep the virus levels down and patients healthy. That is the first crucial step towards this end,” Tiemessen added. MC