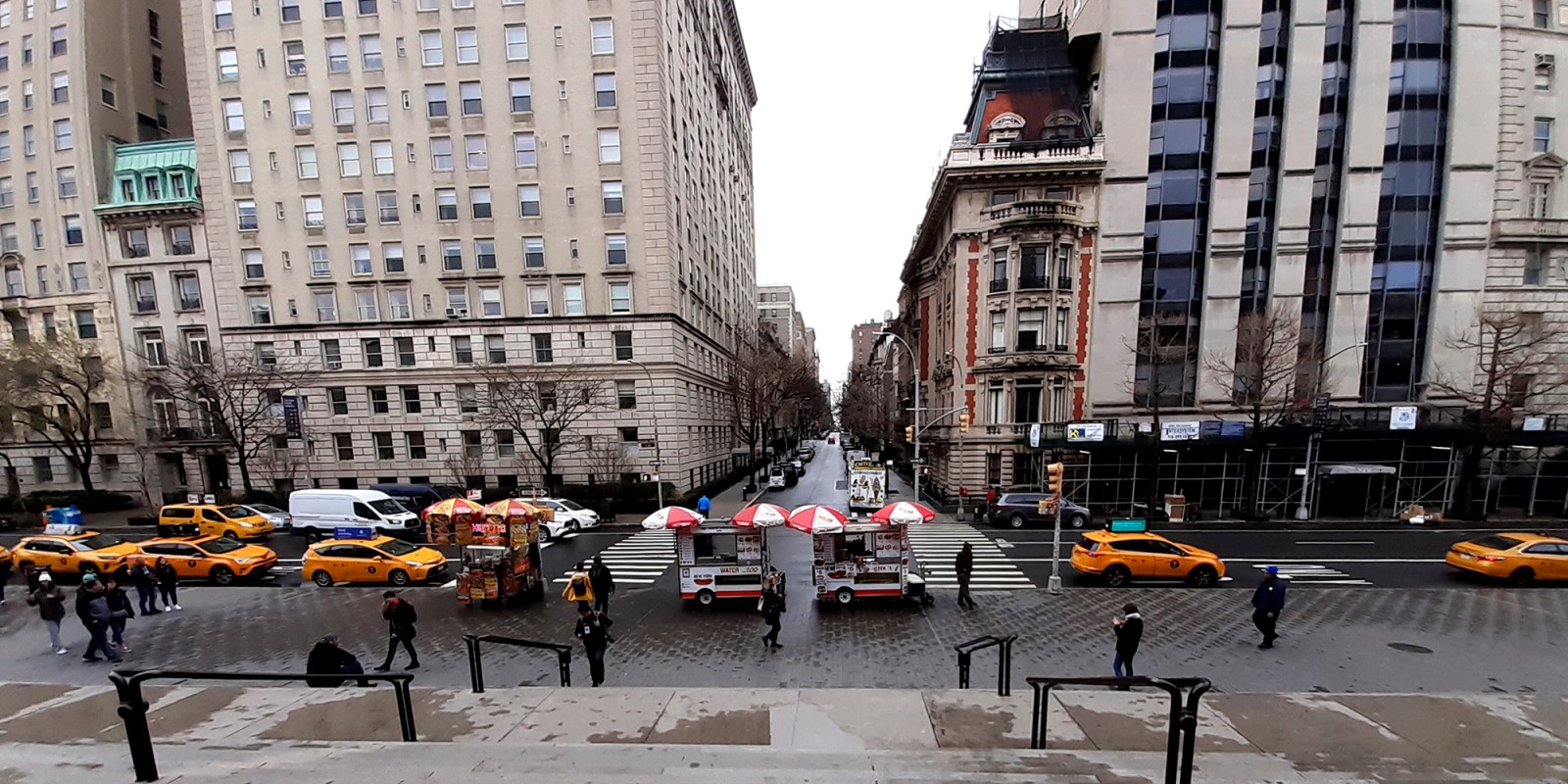 Looking down from in front of the Met's closed doors at the taxis and food trucks waiting for customers on usually packed sidewalk. (Photo: An Wentzel)

The famous avenues where ‘there ain’t never no curfew’ (Empire State of Mind – Alicia Keys), are almost silent.

The city that never sleeps is sleepwalking. Fridays in New York City usually feel electric, but midday, Friday 13 March, central New York City feels like Sunday in late July. The slow Sunday you have when you are not going to church and are not expecting anyone for lunch and can spend the whole day indoors in your pyjamas. The energy bubble that is usually central Manhattan feels burst. Walk down Fifth Avenue and its zip has clearly been zapped.

Coronavirus will do that to any city, especially when a state of emergency has been declared and people are told to take all precautions and to stay away from crowded spaces.

The Big Apple, following Mayor Bill de Blasio’s declaration of a state of emergency and the announcement that people are not allowed to congregate in one space in groups bigger than 500, has left the city anything but crowded.

Fifth Avenue is forlorn. Its famously people-filled sidewalks on any other Friday around lunchtime would be beyond busy. Now it’s bereft of the constant jostle of an amorphous mass of diverse looking and sounding people hurriedly going about their business (usually these are the actual New Yorkers), with tourists walking at a more leisurely pace, stopping to gawp and point.

A river of cars usually flows between the people-filled sidewalks, with the ubiquitous yellow taxis brightening up the streets, but good luck to you if you are trying to hail one! That, however, was before Covid-19.

Getting the measure of this somnolent New York is best done on foot. Walk down Broadway to 116th Street to have a look at the University of Columbia which has sent its students home – spring break is next week anyway – the campus is clearly abandoned, a few students are getting last-minute items and notes.

Food trucks wait for the student body customers that they thought they still had a week to sell their products to. One hot dog vendor says he is not sure what to do with his stock as he has most of this week’s as well as all next week’s which he had pre-purchased. His is just one of many small or medium businesses wondering how they are going to survive financially. Large corporations may be able to weather the Covid-19 storm, small guys… not so much.

Make your way to 110th Street and 8th Avenue where Central Park is snoozing despite the day warming up and the sun coming out as the clock moves towards 2pm. The usual foot traffic and good-natured bustle is all but gone. There are some yummy mummies pushing babies in fancy strollers and a couple here and there just enjoying the space and each other’s company. There are even a few people out jogging and a cyclist whizzes gently by every once in a (long) while…

From there a leisurely walk to Fifth Avenue, where the Metropolitan Museum is closed. You know it is closed, as they announced the closure on Wednesday, but to see it just sitting there with its doors closed… does remove the spring out of your step. The building looks out of sorts. A few tourists sit on the steps as if wondering how this happened, while members of the selfie nation seem to have come out just to whip out their cellphones to take a quick selfie in front of the Met to ensure that they have captured themselves inside this historic and shocking moment in the museum’s history.

The queues to get into the museum are an integral part of the fabric of New York. The same for the food trucks at the bottom of the steps along the pavement in front of the museum, doing a roaring trade selling hot dogs, pretzels, Mexican food and more.

The food trucks are usually surrounded by families, couples and groups of friends buying snacks or quick on-the-go meals after they exit the Met and prepare to move onto the next NYC hot spot. There is also usually enticing food smells coming from the trucks as fare is constantly being prepared and warmed to keep up with demand. Not anymore. Near zero customers, definitely zero food smells. It is lonely here. It is … sad here.

It is in this Met museum moment that a cold feeling of alarm starts to niggle at the edges of your mind. The empty university was interesting but not shocking, sleepy Central Park was curious but not concerning. The brooding stone of the closed Met is another matter entirely… We continue to Broadway and Times Square.

En route is Mom’s Kitchen and Bar. This is a lively Mom as her spot has bright colours, friendly staff and loud, catchy music. Staff are welcoming and the place is bustling, with no signs of hand sanitiser on the tables, or at the waitstaff countertops. Customers are seated efficiently and handed menus with no sign that the coronavirus could be lurking among them.

Asked about customer numbers in the preceding week, a waitress says their business has not suffered and she is really happy they are open so that she can get paid. As for most South Africans, there are millions of Americans for whom the spectre of not getting a pay cheque is much more daunting than the probability of contracting the virus.

A quick five minutes after Mom’s you arrive at Times Square, at Broadway and Seventh Avenue, which is usually almost busier than Fifth Avenue. Brightly lit up with its enormous overhead displays on the sides of buildings, and people thronging around the theatre ticket sales booth. Not today. Of the 12 windows at which tickets can be purchased, one is open. Step up to that lone open window and there is a man sitting chatting to a coworker. Asked if there are any tickets to be bought, he replies: “No ma’am”. So why is he there? Three words: “To do refunds.” (The next day, Saturday, Amtrak starts calling people and sending them messages that their future dated long-distance trips will all be refunded or postponed at no cost.)

A few metres away, a man is holding up a clipboard with a QR code encouraging passersby to scan the code and see what is happening at Broadway Comedy Club, which is still open. Danny Tamayo says the closure of Broadway means between 200,000 and 250,000 people have been put on work furlough. Tamayo says they are practising social distancing seating at the comedy clubs but are having a hard time as online ticket sales, which usually account for half of all sales, are dead. He says they managed to get 500 people into the comedy clubs due to people like himself going out on the street and talking to people “the old-fashioned way”.

#NewYorkCity is struggling with #COVIDー19 fallout #DannyTamayo says the #Broadway #broadwayshutdown means almost 250k people are out of work in theatre industry. pic.twitter.com/mdeoS5ntg0

Leaving Manhattan, about an hour out of the city on the I-95 which runs from Maine to Florida, a fuel stop enables a quick coffee and donut. There is no queue at Dunkin’ Donuts and the women behind the counter say the queue is usually out the door but for the last week there have been no queues at all. “America runs on Dunkin’” is no longer the case, it seems. And America may already have run out of hand sanitiser and toilet paper. DM

By yesterday, Sunday 15 March, the number of cases of Covid-19 in the US had passed 3,100 and at least 61 people had died from the disease.

Seven US states are confirmed to be in the process of setting up drive-through testing centres (Washington, Colorado, New York, Texas, California, Connecticut and Minnesota).