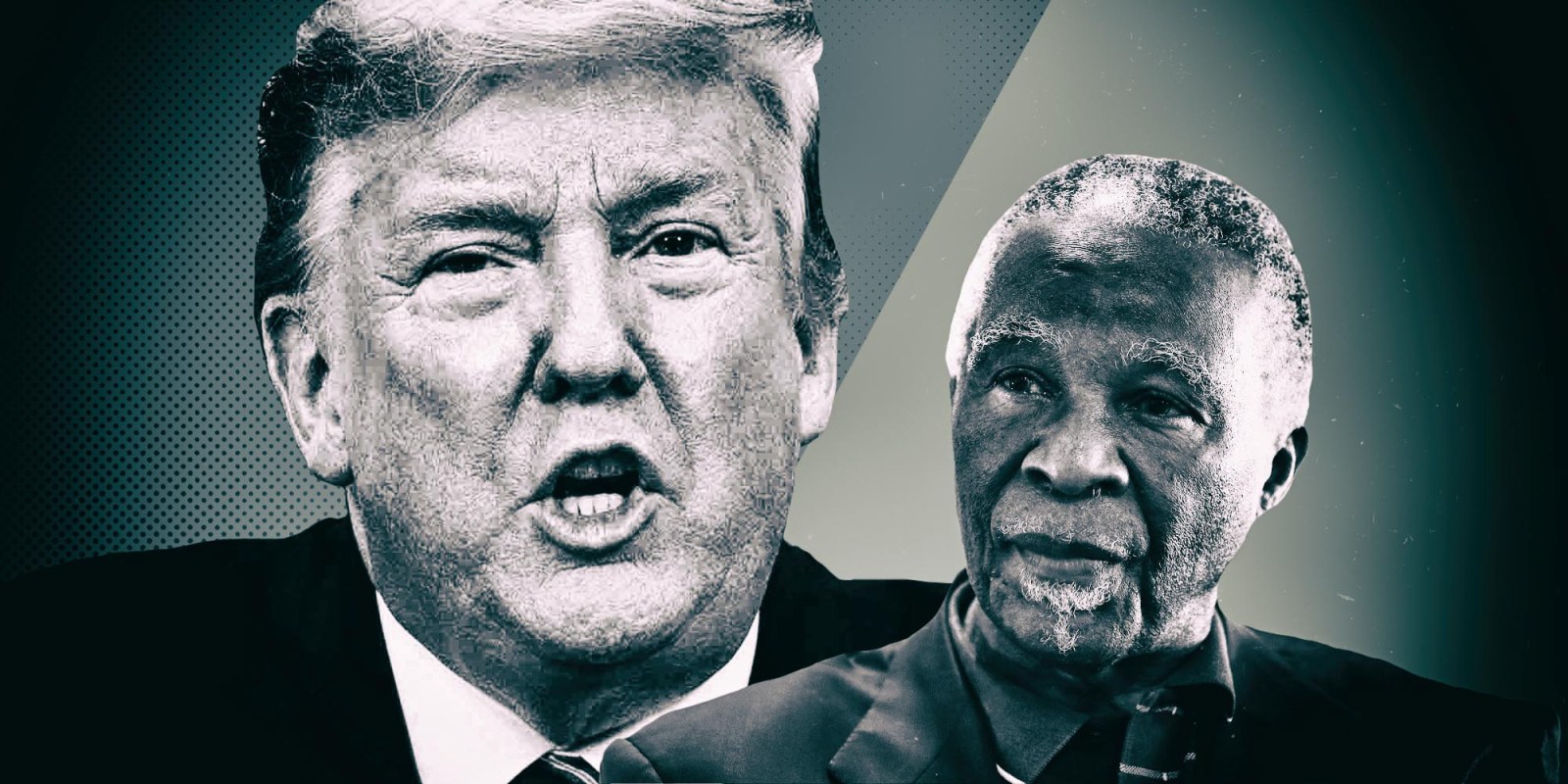 Conspiracy theories, disregard for science and grandiosity are hallmarks of how the US president has handled the coronavirus pandemic — and his words are eerily similar to those of Thabo Mbeki on HIV.

There once was a president who denied that a virus was causing extensive infections. He silenced eminent scientists and entertained a wide range of conspiracy theories.

During his reign, politicking took precedence over scientific facts, blind loyalty was rewarded over scientific excellence and quacks with fake cures were entertained at the highest level.

His name was Thabo Mbeki and he became president of South Africa in 1999 – just as HIV was starting to spread exponentially in the country.

Mbeki’s belief in his own intellectual superiority over internationally renowned HIV scientists came at a huge cost. He refused to allow the rollout of antiretroviral drugs because he thought they were “poison”.

His decision resulted in the deaths of an estimated 330,000 people and the births of 35,000 HIV-infected babies, according to calculations by Dr Pride Chigwedere of the Harvard School of Public Health and his colleagues. By[AT1]  the end of Mbeki’s presidency in 2007, life expectancy in South Africa was a mere 53 years.

US President Donald Trump’s handling of the Covid-19 pandemic is eerily similar to Mbeki’s AIDS denialism, replete with paranoia, distortion, denial of basic science and grandstanding.

At a rally in North Charleston on 28 February, Trump said Covid-19 was a “new hoax” by Democrats after they had failed to impeach him.

Similarly, Mbeki accused the pharmaceutical industry of creating an AIDS bogeyman in order to sell its medicines.

On 6 March, US Secretary of State Mike Pompeo told Fox News the “Chinese Communist Party is providing data sets that aren’t transparent” about the “Wuhan virus”.

Various Trump supporters have taken the anti-China rhetoric further. Republican senator Tom Cotton suggested the virus might have originated from a Chinese “super laboratory” situated “just a few miles away from that food market”.

As recently as 10 March, Trump retweeted a supporter describing coronavirus as “China virus”, accompanied by the comment, “We need the wall more than ever.”

Aside from using the pandemic to take cheap shots at China, Trump has downplayed its spread and impact. He falsely claimed at a press briefing on 26 February that there were only 15 cases in the US, infections were “going very substantially down, not up” and that “the 15, within a couple of days, is going to be down to close to zero”.

The only thing that had in fact been contained was the availability of test kits. By 6 March, the Centers for Disease Control and Prevention (CDC) reported that it had tested 5,861 people. In contrast, South Korea tested more than 66,000 people within a week of its first coronavirus case.

Without expanded testing for SARS-CoV-2, the virus that causes Covid-19, Trump and Conway had no evidence to make any claims about the extent of US infections.

The lack of widespread testing, and thus reliable data, did not stop Trump from disputing the World Health Organisation’s estimate that Covid-19’s mortality rate was 3.4%, describing this as “a really false number”.

“Now, this is just my hunch, but based on a lot of conversations with a lot of people that do this … I think the number, personally, I would say the number is way under 1%,” Trump told Fox News on 4 March.

Mbeki, too, believed in hoaxes and had plenty of hunches and conversations with charlatans. Before he stopped believing in HIV altogether, Mbeki promoted an untested industrial solvent called Virodene as an HIV “cure” and invited its manufacturers to address his cabinet.

Like Mbeki, Trump has surrounded himself with people who do not believe in basic scientific facts. Right-wing Christians are the bedrock of his support base. His evangelical vice president, Mike Pence, the person Trump has put in charge of the US response to coronavirus, has refused to state whether he believes in evolution.

Anthony Fauci, director of the National Institute of Allergy and Infectious Diseases and globally revered for his role in fighting HIV, has to clear all his coronavirus comments with Pence’s office.

Trump has also described global warming as a “hoax” and withdrew the US from the Paris Agreement, a key international initiative aimed at addressing climate change.

Trump’s disdain for science has seen an exodus of scientists from government office, particularly those researching climate change. He has also implemented huge budget cuts for science and health. The CDC’s budget was slashed by $15 billion in 2018; as a result the US global health security unit – set up to tackle pandemics like coronavirus – was disbanded and the country slashed its contribution to global disease prevention by 80%.

CDC director Robert Redfield admitted to the US Congress this week that budget cuts have left the organisation  far less able to respond effectively to coronavirus.

In his day, Mbeki also cut the health budget and his health minister oversaw the closure of nurses’ training colleges shortly before the health system was overwhelmed with HIV-positive people.

Despite his unscientific approach, Mbeki projected himself as an expert in scientific matters. In an interview with Time magazine in September 2000, he declared, “The notion that immune deficiency is only acquired from a single virus cannot be sustained.”

Trump too fancies himself a scientist. “I like this stuff. I really get it. People are surprised that I understand it,” he said recently.

Currently one of our few defences against coronavirus is vigorous hand-washing. Once our only defence against HIV was condoms, but antiretroviral medication has rendered HIV a manageable chronic disease. It is highly likely that treatment for coronavirus, and perhaps even a vaccine, will be developed. But the chance of a cure for arrogance and narcissism is much less likely. DM

Kerry Cullinan has been reporting on health, specifically public health and HIV, for more than 30 years. She is former manager editor of Health-e News Service and is currently health editor for openDemocracy 50.50.