Life in lockdown Italy – ‘It’s like a creepy summer holiday’ 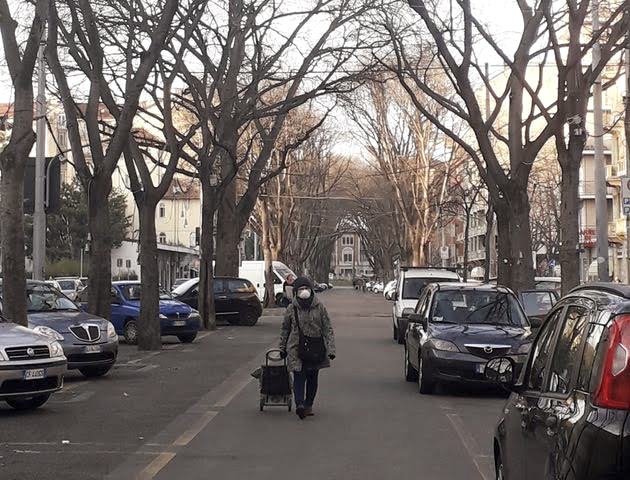 A woman walks through a largely empty street in Turin.(Photo: Claire Provost)

Italy’s government has told everyone to stay at home until 3 April as it tries to contain Covid-19. openDemocracy’s Claire Provost reports on life in a country where people have been threatened with prison for travelling between cities without approval.

The handwritten yellow sign on the pharmacy’s window – “masks and hand gel out of stock” – has been up for weeks. But now there are many more signs on shop doors, telling customers that only a few people can enter at a time and that they must remain a metre apart. Many shops are shuttered entirely.

“It’s just like Ferragosto!” the only other person in my local square on Wednesday morning shouted to no one. He was referring to the annual 15 August public holiday that is famous for its exoduses from the cities. Around then, those who can head to the beach or the mountains. “There is no one here, it’s crazy,” the man continued.

The comparison with a holiday was striking, because it’s hard to have fun during a pandemic. But it was also apt because while a lot of things are shut in mid-August, cities do not completely close down. And that’s what life has actually been like on the ground in Turin, amid what is now an official national lockdown.

To read the international news, you’d think that everything in Italy is closed and everyone is sick or scared. But the reality has been more confusing.

Turin, where I live, was one of the only parts of the Piedmont region that was spared quarantine until 10 March 2020. We are about 200km west of Codogno, the small Lombardy town that was the epicentre of Covid-19 in Italy. I’m from Canada, where this is a short distance. Here it’s not: the danger seemed far away.

While schools have been shut in Turin for weeks, and Covid-19 has dominated the news, we remained outside the “red zones”. Then, as more people were tested, we became almost entirely encircled by quarantined provinces. On 9 March, red zones disappeared as the entire country went into “lockdown” as of 10 March.

The government told everyone, nationwide, to stay at home until the beginning of April – at least. They told us online; they told us on social media; they told us on TV: Don’t go outside unless it is strictly necessary. Don’t travel outside your city unless you have a clear and approved reason, and a form to prove it.

Until 9.45pm on Wednesday night, cafés and restaurants could still open until 6pm and my neighbourhood market was still open during the day. For every three shops on my local street with a sign restricting access, there was one which seemed open to business as usual.

Some, but not all, of this has changed since the new announcement last night (11 March). More is closed, and now we’ve been told we need to carry a form justifying any movement we make outside our homes.

Alongside the simple request – don’t go outside – are numerous rules and exceptions and threats. You can still go to the supermarket for basic goods and to walk your dog. You can also still travel to work if you need to (as not all employers have shut down).

But all public gatherings are banned. Schools are closed. If you’re caught travelling between cities without an approved reason, you could risk up to three months in prison or a fine, according to the state police’s colourful but not-so-cheerful Twitter announcements. (Visiting your friends is not an approved reason.)

Since Tuesday, more than a hundred people have already been charged with disobeying these rules, according to local media reports. International stories have meanwhile been illustrated with pictures of empty piazzas across Italy. But life also goes on – and it’s hard to square what I read online with some of what I see in person.

I work from home and have been limiting my movements for weeks. But I was expecting to see more of a difference on the streets this week. There are more people wearing masks (or scarves around their mouths), but some are still out and about, and my local playground is still (half) full of children playing.

The security guards at our supermarket are wearing masks too, and standing at the front door letting in only so many people at a time. Inside, people are moving more efficiently, grabbing what they want. The soap shelves are sparse, but the cheese aisle is still heavily stocked (otherwise might be a tell-tale sign of apocalypse).

Some staff at shops are wearing winter or garden gloves. Some people cross the street to avoid close contact – while others still congregate, stop to pet dogs and pull down their masks for cigarettes.

We’re not supposed to go anywhere, but public transport is still running. The tram that goes by my flat is still making its routes – and the regular sound of it passing down the street is reassuring, though I haven’t seen more than a couple of people inside its cars, seated at the back, far apart from each other and the driver.

Confusion doesn’t help the anxiety that has been building now for weeks. We haven’t known what’s coming – or how long it will last.

Locally, for instance, Turin’s Egyptian Museum had announced reduced rates for the first two weeks of March under the hashtag  #laCulturacura (culture cures). Now, however, it is closed along with many other places for who knows how long.

If you follow the government’s announcements and their promulgation on TV news channels, you’ll know that we’re in the middle of a national crisis. The rising numbers of deaths and reports of overwhelmed hospitals are frightening.

You worry about getting Covid-19, but also passing it, perhaps unknowingly, to someone who could get seriously ill and even die. But you also worry about what would happen if you break a leg. Where do you go if an emergency room is closed?

Can you still pay your electricity bill if you’re not working, can’t travel, and the company’s office and call centre are closed? Will your elderly family members in another city, which you can no longer reach, be okay?

It’s not easy to answer these questions despite a deluge of information online. The Piedmont government said internet use by people in this region has shot up by 50% compared to January. This is of course not surprising. What else are you supposed to do, stuck inside? But it is worrying as fake news continues to spread too.

Recently, there was a false story about a plane flying over cities spraying them with disinfectant. But what’s been most confusing for me is the clash between the “locked down” narrative from above, and the feeling on the ground. Where I live, it’s been more as the man in my local square suggested: Like a creepy summer holiday. DM