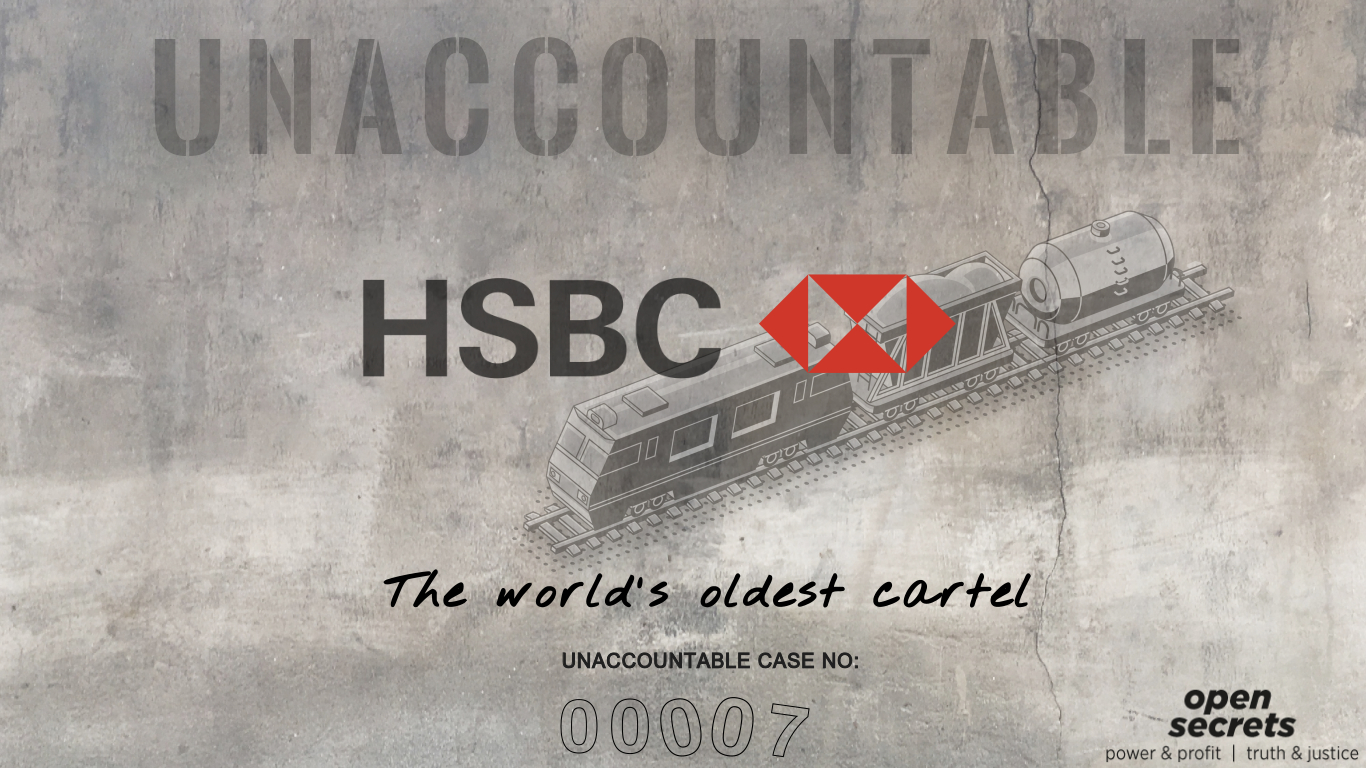 If Transnet was a golden goose for the Gupta family and their associates, then global banking giant HSBC played the role of tending their illicit nest eggs. This week Open Secrets examines the role of a key global enabler in the State Capture network. As shown in The Enablers investigative report, it takes more than a few corrupt politicians to capture the state. It requires a global financial machinery – and HSBC was an important bank in this network.

The now infamous purchase of 1,064 locomotives by Transnet was fraudulently inflated to over R50-billion, primarily to facilitate kickback agreements between Gupta-linked front companies and the Chinese supplier – China South Rail (CSR). Ultimately, over R5-billion in kickbacks were dressed up in the language of “advisory services” and paid to firms owned by Gupta lieutenants.

Most of these payments went into HSBC bank accounts of these firms in the notorious secrecy jurisdictions of the United Arab Emirates and Hong Kong, and then rapidly distributed into hundreds of other accounts, many belonging to other front companies. This is a typical tool of money laundering. To do this, the Gupta network relied on HSBC, a global banking giant, to both hold the accounts and facilitate the payments. The bank did so in the face of overwhelming red flags and evidence that the transactions were suspicious.

This is not the first time that HSBC has been implicated in the facilitation of organised crime and grand corruption for the sake of profit. Arguably, its conduct in enabling State Capture in South Africa is a continuation of a pattern of behaviour where HSBC has accepted fines as a cost of doing business. South African authorities and the Zondo Commission have a unique opportunity to ensure that the impunity HSBC has enjoyed for too long comes to an end.

The success of the Narcos Netflix series and the several docuseries it has spurred has led to a romanticisation of figures such as Pablo Escobar and El Chapo. However, left out from the depictions of the extravagant and violent lives led by these figures are the bankers who help move dirty drug money into the legitimate economy, the enablers without whom the drug trade would not be profitable. It is also important not to lose sight of the tremendous violence meted out to the people of Colombia and Mexico by vicious drug cartels who, alongside their enablers like HSBC, profit from the “nightmare trade” and its associated human rights abuses which include beheadings, kidnapping, torture, gender-based violence and the bribery of officials.

Exemplifying HSBC’s role in the drug trade is a United States government Deferred Prosecution Agreement that confirmed that between 2006-2010, the Sinaloa Cartel headquartered in Mexico and the Norte del Valle Cartel in Colombia, used HSBC to launder proceeds from their drug trade. This is a highly lucrative trade and according to an estimation by the US Justice Department in 2012 the Mexican and Colombian cartels were making between US$18-39-billion each year from drug sales in the US alone.

It was clear that HSBC had failed to uphold Anti-Money Laundering (AML)/ Know Your Customer (KYC) banking standards, and thus facilitated the laundering of criminal proceeds. Yet there was also evidence that HSBC’s Mexico offices willingly participated in criminality. HSBC Mexican branches are said to have “widened tellers’ windows’ to allow bigger boxes of cash to be pushed across the counters”. In the reporting on this matter, many would soon draw the link between this and the Opium Wars in which HSBC’s founder, Thomas Sutherland, and its first board chairman, Thomas Dent, participated in and profited from through the freight industry and the opium trade. HSBC is a bank with a sordid history, referred to by some  as the “world’s oldest drug cartel”. All this should be borne in mind when considering how HSBC facilitated the flow of funds looted by the Gupta enterprise from the South African public purse.

The R54-billion procurement of 1,064 locomotives by state-owned freight-rail company Transnet remains one of the most notorious and brazen examples of State Capture. In 2012, Transnet entered into a contract with China South Rail (CSR) for the procurement of 359 electric locomotives as part of the 1,064 deal. Because CSR is a Chinese company, it had to enter into a contract with local BBBEE business partners. Initially, CSR chose “trading companies” CGT and JJT as its BBBEE partners, and they would earn a staggering 21% “consulting” fee of CSR’s R18-billion contract with Transnet.

HSBC did flag suspicious transactions that had flowed between CGT and JJT and other shell companies, but three years too late. By then, CSR had already paid JJT and CGT R1.6-billion of the intended R5.3-billion – and the #GuptaLeaks show substantial evidence of this flowing into the Guptas’ offshore accounts.

In 2014, however, CGT and JJT’s contract with CSR was succeeded by a similar consulting contract with two different companies – Tequesta Group Limited and Regiments Asia. JJT had been paid R706,770,480.00 when they were replaced by Tequesta (this was 3.9% of the 21% advisory fee of R3.8-billion).

Tequesta and Regiments Asia’s CEO was Salim Essa, a man who has been widely referred to as a “Gupta lieutenant”. The companies were registered by Essa in Hong Kong, on the same day, 20 June 2014. Essa did this with the assistance of Stephen MS Lai, a Chartered Accountant based out of Hong Kong and London that specialises in selling tailored corporate entities in Hong Kong and other secrecy jurisdictions.

The company formation documents for Regiments Asia and Tequesta Group Limited make it clear that both companies were formed by Lai’s business. As stated above, they show the companies were registered on the same day – 20 June 2014 – and had Salim Essa listed as a director. In addition, the company secretary for both companies is listed as PAMM Corporate Secretary Limited. The email address provided for PAMM Corporate Secretary Limited was a’[email protected]. The email address server is the same as the address of Stephen MS Lai’s website. Moreover, the physical address provided for PAMM is identical to the Hong Kong physical address listed on Lai’s website.

In 2017, the Organised Crime and Corruption Reporting Project (OCCRP) obtained documents and banking data which showed that around R1.3-billion was paid out by China South Rail (CSR) in over 40 transactions to HSBC accounts held by Tequesta and Regiments Asia. CSR’s payments to Tequesta and Regiments Asia accounted for 90% of the credits to these accounts. Yet these funds did not remain in these two companies’ bank accounts for long. More than $100-million was transferred from Regiments Asia to two dozen companies, mostly via HSBC, with other banks in Johannesburg, Dubai, and the USA playing a part in the movement of money.

Noting the very narrow period of activity in these bank accounts, and the tendency for large sums to be deposited and immediately moved on, the OCCRP concluded that these companies were shell corporations used at least in part for the purposes of money laundering. These payments by Regiments Asia were all made between late 2014 and February 2017 – the bulk of these transfers occurring in February 2017.

All of the evidence in the public domain suggests that HSBC should have swiftly identified that the Tequesta and Regiments Asia accounts required monitoring, investigation and, ultimately, suspension. This would have ensured they were complying with their Know Your Customer and Anti-Money Laundering obligations.

The following factors are the most important evidence of this:

Given all of these factors, it seems clear that by the time HSBC Hong Kong was providing banking facilities to Tequesta and Regiments Asia, it was widely known that Salim Essa was closely linked to, and alleged to be a frontman for, the Gupta brothers. It is thus inexplicable that no attempt was made to shut these accounts, or, at the very least, investigate and establish what connections the Tequesta and Regiments Asia accounts had with the Gupta family or other South African corruption scandals.

HSBC’s response to these investigations has been to deny any knowledge of the scheme and play down their role. Responding to the OCCRP, their response read, “HSBC simply has no desire to do any Gupta-related business. To the best of our knowledge, HSBC previously exited, is in the process of exiting, or never had a banking relationship with Tequesta, Regiments, … [and persons such as] Mr. Salim Essa … or other members of the Gupta family, and other Gupta-related entities we have become aware of through the media or otherwise.’

In total HSBC has paid over US$6-billion in fines since the year 2000. When it entered into a Deferred Prosecution Agreement with the US Department of Justice in 2012, it paid $1.9-billion and agreed to monitoring by US regulators. Yet, unabated, HSBC has continued to pay fines for AML failures and other failures to comply with their legal duties, as seen by the over 40 fines listed on Violation Tracker a wide-ranging database on corporate misconduct.

While the $1.9-billion fine was the largest paid by a bank at the time and it sounds significant, it amounted to less than a month of HSBC’s profits. It represented what many have come to see as “velvet accountability” for the banking sector. Even when there is significant evidence of egregious law-breaking, authorities decline criminal charges, do not prosecute any executives or employees in their personal capacity, and rely on settlement agreements and penalties that have little impact on super-wealthy banks. Velvet accountability leads to impunity and, as seen with HSBC’s conduct in the State Capture story, unaccountable actors are doomed to repeat the same patterns.

It is for this reason that Open Secrets has called on the State Capture Inquiry to summon each bank, accounting firm, consultancy and legal professional implicated in State Capture to publicly answer, at minimum, the following questions:

HSBC has enjoyed the “too big to fail, too big to jail” privilege enjoyed by global banking giants for decades. While its conduct in enabling State Capture is simply the latest in a litany of scandals it has faced, the Zondo Commission and other South African authorities can challenge the bank on its conduct in this regard, and set a precedent that can contribute to ending the impunity for the banks that enable crimes around the world. DM

Open Secrets is a non-profit organisation which exposes and builds accountability for private-sector economic crimes through investigative research, advocacy and the law. Tip-offs for Open Secrets may be submitted here.

Previous articles in the Unaccountable series are:

Unaccountable 00006: Nedbank and the Bank of Baroda: Banking on State Capture.