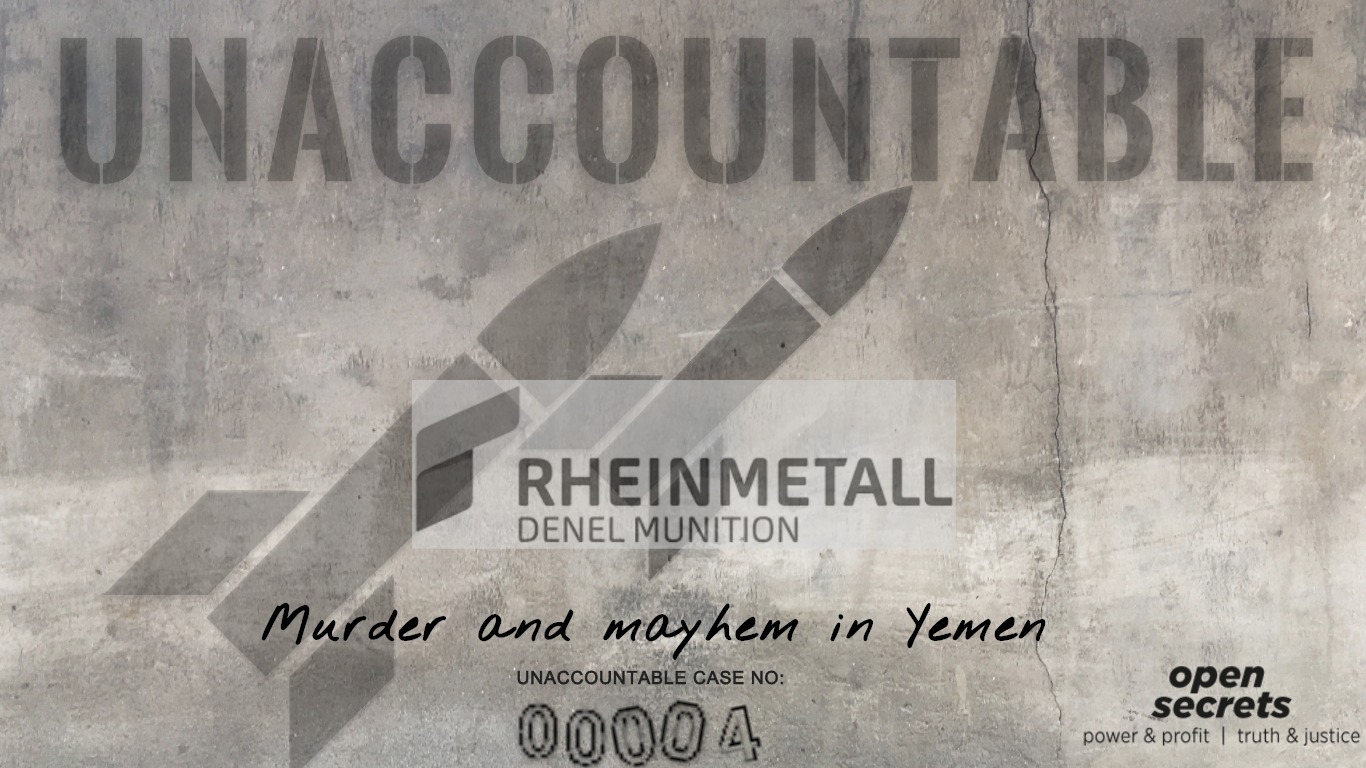 Companies with South African links have been allowed to supply Saudi Arabia and its allies with weapons — despite the humanitarian destruction the war in Yemen has wrought.

Yemen is at the epicentre of a regionalised civil war. Over the past five years, thousands of combatants have been killed and United Nations (UN) reports show there is evidence that civilians have been deliberately targeted in the brutal conflict.

A South African-based defence firm has been involved in selling weaponry suspected of fuelling the crisis linked to human rights violations in Yemen. This practice was halted only in 2019 when export controls tightened by the South African government came into effect.

Yemen now finds itself in a dire situation. Disease is rife, schools, factories and hospitals have been destroyed, 22.2 million people are in desperate need of food, and an estimated 85,000 children have starved to death.

This has contributed to the UN naming Yemen home to one of the world’s worst humanitarian crises.

Such unimaginable suffering not only requires urgent humanitarian intervention, but also scrutiny and accountability of those who have enabled these human rights violations and profited from this misery. South Africa should not be exempt.

While some seem worried about potential loss of jobs and financial hurt to the arms industry, there is also real tragedy in the backdrop of extreme violence and loss of life that these arms sales have caused.

The roots of the war in Yemen are complex. They can be traced back to late 2014 when Houthi forces, with the allies of former President Ali Abdullah Saleh, seized significant territory in Yemen including the country’s capital, Sanaa. The conflict escalated in 2015 when a coalition of forces led by Saudi Arabia and the United Arab Emirates (UAE), with support from international allies, launched an aggressive air campaign in an effort to re-establish Yemen’s internationally recognised government of President Abd-Rabbu Mansour Hadi.

The Saudi-UAE led coalition’s military intervention started with a widespread (and indiscriminate) aerial bombing campaign by fighter jets supplied to the Saudi Air Force by British arms firm BAE. It has since extended to a naval blockade and deployment of ground forces.

While the geopolitics of this story are important, we should not lose sight of the powerful private arms companies that have continued to profit from this war by supplying the weapons that have fuelled it. Some of these are apparently close to home and include South African-based Rheinmetall Denel Munition Pty Ltd. (RDM). RDM is a joint venture between state-owned arms company Denel (which holds a 49% stake) and German arms company Rheinmetall AG (51%).

There is increasing evidence that the Saudi-UAE coalition forces have targeted civilians and that the weapons produced in RDM’s four facilities on South African soil can be linked to the death of civilians in Yemen.

In 2016, the Al-Kharj military facility in Riyadh, reportedly built in collaboration with RDM, was officially opened by former president Jacob Zuma. This facility produces heavyweight aircraft bombs and 600 mortar missiles a day. With regard to complicity in war crimes, this is hugely dangerous as South African arms companies, such as RDM, run the risk of aiding countries such Saudi Arabia to build and establish factories that have the capability of creating internationally banned cluster munitions.

In 2018 the Saudi coalition launched an attack where missiles and mortars were fired on a crowded fish market in the port city of Hodeida. Fifty-five civilians were killed and 170 wounded. The crowded fish market is only a few hundred metres from the city’s main hospital. Just 30 minutes later a second strike targeted the street in front of the hospital where the wounded had been transferred. The munition fragments found at the scene shared numerous characteristics with RDM’s distinctive 120mm mortar bombs. This hints at a direct link between the export of South African weapons, in this instance through RDM, and the killing of scores of innocent civilians.

In October 2018, subsequent to the controversial assassination of journalist Jamal Khashoggi in a Saudi consulate in Istanbul, the German government put a temporary ban on the sale of weapons to countries involved in the war in Yemen — a decision that angered the German arms industry which feared it would cut into profit margins by depriving it of a lucrative market.

Though Germany itself has been accused of poorly enforcing the ban, Rheinmetall has also been criticised for using companies such as RDM, registered in South Africa, to circumvent the ban.

As a South African-based company, RDM is of course still subject to South African and international law. Formally, South Africa has one of the most advanced and progressive arms export laws and processes in Africa, the bedrock of which, on paper at least, are human rights considerations and transparency.

This is where the National Conventional Arms Control Committee (NCACC) fits in.

The NCACC, created to break with apartheid’s history of secretive arms deals, supervises all arms exports from South Africa. It also enforces the Conventional Arms Control Act of 2002 which prohibits South Africa from supplying arms to countries where human rights are being abused or where they might destabilise a region.

In theory, this transparent system should have prevented the supply of South African-manufactured weapons to the conflict in Yemen. Yet, as described above, the artillery shells found at the scene of civilian attacks in Yemen presents the clearest possible evidence that local arms exports to the Saudi coalition are being used to commit the most serious human rights abuses and violations of international law.

This brings into question the role of the NCACC, which has before been accused of laxity.

Televised footage showed a Denel drone being shot down over Yemen in July 2015. Subsequently, when questions were asked about what South African weapons were doing in Yemen, the head of the NCACC at the time, Minister Jeff Radebe, merely pointed to possible Saudi breaches of end-user certificates, meant to ensure that weapon buyers do not resell purchased weapons to third parties. He had apparently not investigated these serious allegations of violations of South African and international law. In 2017, Parliament’s joint standing committee on defence requested that Radebe provide a report of the sale of South African arms to Saudi Arabia. Though he agreed to, there is no suggestion that he did so, despite the urgency with which this should have been dealt with.

In the months leading up to South Africa’s general election in May 2019, the munition flows out the country changed significantly.

New export authorisations were apparently halted — this was seemingly because of the anticipated changes the election was expected to have on the NCACC. Following the election, its chair changed from Radebe to Minister in the Presidency Jackson Mthembu, who seemed to take a much stricter approach to exports.

In September 2019 RDM’S chief executive officer at the time, Norbert Schulze, told Reuters the pausing of export authorisations meant stores had filled up and as a result, no further production could take place. He believed the NCACC had halted export licences to Saudi Arabia and the UAE.

“The thing we know at this time is that we do not get any export licences for Saudi Arabia or the UAE,” he was quoted as saying. Schulze further said he told Public Enterprises Minister Pravin Gordhan an official decision to ban these exporting licences would hurt RDM and that “we (would) have to rethink what we are going to do with our workforce, with our costs”.

Towards the end of 2019 the local arms industry was still struggling to come to terms with the strict enforcement of provisions requiring countries wanting to buy arms from South Africa first having to agree to an onsite inspection by South African officials. Purchasing countries also had to pledge not to transfer weapons to third parties.

Saudi Arabia and the UAE were among the countries that did not want to agree to these requirements because they felt it was a step too far that infringed their sovereignty.

UAE customers had apparently started overlooking RDM and were instead turning to China, India and Serbia to meet their munition needs.

Schulze wrote to the NCACC, pushing for it to act urgently. However, the NCACC remained firm. Mthembu had reportedly said:

“The NCACC is aware of the possible loss of jobs occasioned by the inability to export in the time being. However, as your organisation would appreciate, compliance with regulations sometimes produces negative impact.”

So, why has the NCACC dragged its feet in clamping down on these exports? The answer is likely linked to the massive profits that are made from the global arms trade. This conflict, paid for with petrodollars from Saudi Arabia and the UAE, is a money-making machine for the arms corporations.

According to research by the Stockholm International Peace Research Institute (SIPRI), which documents the global flow of weapons, the sale of arms to the Middle East increased significantly between 2013 and 2017. Saudi Arabia is the largest purchaser in the region, trailed closely by the UAE. South African companies have jumped on this opportunity. Records reflect that between 2016 and 2017 alone, South African arms companies sold arms worth more than R3-billion to the UAE and Saudi Arabia. For the period 2007-2017 South Africa was among the UAE’s top arms suppliers.

RDM has been an important element of this booming business. Established only in 2008, it has enjoyed impressive revenues. RDM’s profits are largely generated from exports, and Saudi Arabia and the UAE have been particularly important markets. In 2014, when the war in Yemen began, RDM saw a 20% spike in its export revenue, and it has enjoyed these high returns since.

It is clear that South African companies have been allowed to supply Saudi Arabia and its allies with weapons — despite the humanitarian destruction the war in Yemen has wrought. As increasing evidence suggests, this trade is complicit in war crimes and the murder of civilians.

While the conflict in Yemen causes widespread human suffering, arms companies such as RDM — with an important shareholding by the South African public — have until recently seen the world through the lens of dollar bills. This is largely blind to a civilian crisis and instead sees a profitable market for its bombs and munitions.

Arms companies should no longer be left unaccountable — the South African government, as co-owner of RDM, on behalf of the South African people, must put a permanent stop to the dirty profits from a war that is a violation of human rights. DM

Open Secrets is a non-profit organisation which exposes and builds accountability for private-sector economic crimes through investigative research, advocacy and the law. Tip-offs for Open Secrets may be submitted here.