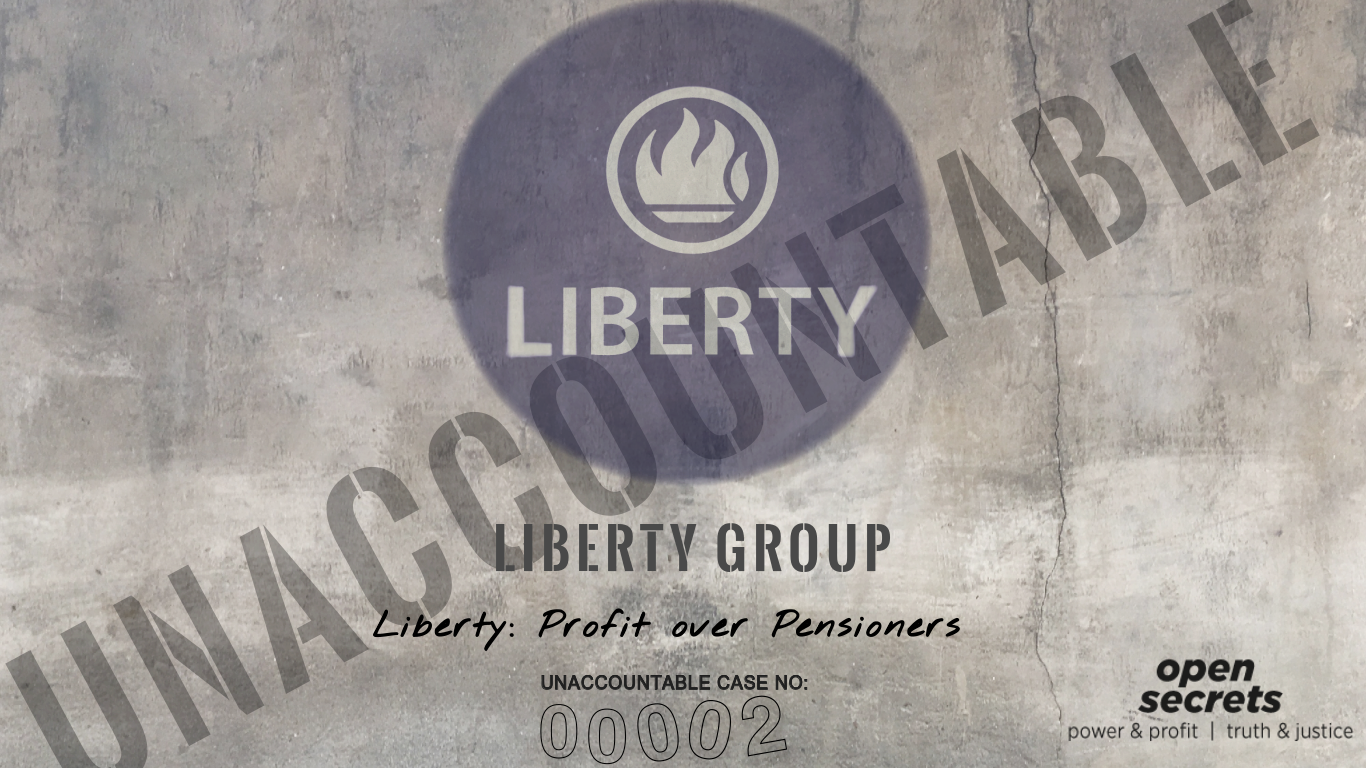 More than 16 million South Africans contribute to a pension fund, most of which are run by financial behemoths like Liberty. They do so in the hope of a decent dignified life in retirement, and to ensure their dependants will be paid if they die. While the South African public is castigated for not saving enough for retirement, the pension fund industry is largely silent when it comes to the over R40bn in ‘unpaid benefits’ owed to over 4 million people. Is this because fund administrators and asset managers profit from this money?

The four million people who are owed R40-billion in “unpaid benefits” include pensioners inside and outside South Africa, workers who have moved or lost their jobs, as well as children and spouses who are eligible for benefits. Many do not know that they are owed, how much they are owed and how to go about claiming their benefits. In a context of pervasive poverty and high inequality, it is unacceptable that private companies profit from the billions owed to vulnerable South Africans.

Liberty and the Cancellations Project

The “unpaid benefits” – legally owed to pensioners or fund members but still unpaid – are found in places such as pension funds, provident funds and insurance policies. The story of incorrectly cancelled pension funds is just one part of the broader scandal of unpaid benefits. But it is an important part of understanding the incestuous relationship between the regulator, who should act in the public interest, and financial service providers.

Between 2007 and 2013, the Financial Services Board (FSB) cancelled the registrations of 6,757 pension and provident funds. A KPMG investigation requested by the FSB found that 98% of the cancellations took place when the regulator had insufficient information to carry them out – making them unlawful. Often, the information that was submitted to the regulator – by private pension fund administrators like Liberty – was incorrect. This led to the cancellation of funds which still had assets and members to pay out. Insurance giant Liberty administered 80% of the cancelled funds and was a prime culprit in providing incorrect information that led to the cancellation of these funds.

Many actors in the pensions industry are implicated in contributing to this problem and failing to fulfil their legal duties. Liberty argues that the R100-million identified so far that they owe to members of funds that they had cancelled incorrectly is small compared to the industry-wide issue. While R100-million may be small fry to a billion-dollar company, it is not a small matter to the individual pension fund members who gave up a portion of their income for years, and yet have still not been paid their benefits. Moreover, the story of how pension funds were cancelled is emblematic of systemic problems in the industry.

Cancelling the registration of a pension fund means that it can no longer carry out its usual activities and fulfil its duties to members. Once cancelled, it cannot pay the fund members their pension benefits. For this reason, the law requires that the registrar have enough evidence in its possession to conclude that the fund no longer has any assets or members to pay before the fund is cancelled.

However, between 2007 and 2013 the regulator cancelled thousands of funds without having adequate or accurate information. An important reason for this is that in this period, the registrar Dube Tshidi appointed single individuals to be sole trustees and authorised representatives (which was unlawful) of over 4,000 funds, instead of requiring proper boards to be formed. In most cases, employees of fund administrators like Liberty were chosen to fulfil this role. In many instances, those individuals then submitted the names of hundreds of funds in bulk to the registrar to be cancelled. The problem was that those individuals had often failed to thoroughly check the fund records to work out whether the fund still had members to pay.

Liberty has since admitted that it has discovered at least 130 funds that it had erroneously cancelled in this way. These funds owe over R100-million to around 3,000 people. There could still be more undiscovered errors given the sheer speed at which the cancellations were carried out. For example, Chantal Hugo (a Liberty employee) was appointed as sole trustee for over 900 pension funds and submitted them all for cancellation in less than two years.

Liberty points to poor records and inconsistent asset registers for its errors, partly as a result of their purchase of other fund administration businesses in the early 2000s. Patchy records are certainly part of the problem. However, Michelle Mitchley, a whistle-blower who worked at Liberty on this cancellation project, has reported that she and other staff raised the alarm about errors in the process, but these were ignored. Liberty employees found discrepancies and errors in financial records, but when they reported the errors, they often discovered that the funds had already been cancelled, sometimes when they still had assets. When Mitchley raised concerns about the errors, she was criticised for slowing down the process.

This insistence on speed over caution defined Liberty’s approach to cancellations. Liberty contracted boutique consultancy, K2B, to assist them with preparing and submitting funds for cancellation. To incentivise speedy cancellation, Liberty’s contract with K2B provided for special bonuses to be paid if they reached certain targets for cancelling funds within a certain time. An investigation by KPMG, this time at Liberty’s request, found that Liberty had “insufficient oversight of their contractors (K2B)”.

The prioritisation of Liberty’s internal targets and K2B’s profit failed the legislative requirements that govern how fund administrators behave and seek to protect pensioners. Most important, administrators are required to exercise the “utmost care”, keep proper records and avoid any and all conflicts of interest. Submitting hundreds of pension funds for cancellation when they still had assets and members represents a failure to fulfil these legal duties. Moreover, while Liberty may have inherited poor records when they bought other businesses, it was their legal duty to do what was possible to fix these records.

Liberty and other fund administrators profit immensely for their role in administering pension funds. On top of basic administration fees, most charge an “asset-based administration fee” which goes up as the value of the assets goes up. Such fees are deducted from investment earnings. Second, asset managers charge their own asset management fees. While the administrators and the asset managers are separate, it does often occur that funds administered by one company choose to invest “in-house” – for example, many funds administered by Liberty choose to have their assets invested with StanLib (a Liberty subsidiary).

Arguably, the potential of fee income was part of Liberty’s motivation to aggressively expand its share of the pension market at the turn of the century. It insisted on buying only “full service” funds that gave them control of administration services, asset management and risk cover. All of those services generate fee income as well. Incidentally, it was also these purchases that put Liberty in the position of administering funds with poor records, which they give as a reason for many of their mistakes in the cancellations process.

But herein lies the central conflict of interest in the pensions industry. Unpaid benefits, whether they sit in old forgotten investment portfolios or new specialised “unclaimed benefits funds”, continue to provide an opportunity for fee income and profit for fund administrators and asset managers. When funds were cancelled in error during the cancellations project, beneficiaries could not be paid, but the fee income for the administrators and asset managers continued.

In this context, the public relies on the industry regulator to hold administrators to account and thoroughly investigate how these errors occurred and whether any of these actors benefitted unduly. They have the power to compel such actors to hand over records and other information that private corporations will not provide to investigators like us. However, this has not occurred.

Responding to questions from Open Secrets, the Financial Sector Conduct Authority (which has replaced the FSB as the financial services regulator) confirmed that “there have been no internal investigations undertaken by the FSCA into the conduct of Liberty Corporate in relation to the Financial Services Board’s pensions cancellation project”.

Liberty is just one administrator implicated in errors during the cancellations project. Large questions also linger about the conduct of Alexander Forbes. Yet the extent of Liberty’s involvement in the cancellations, and their own admission of errors, coupled with the FSCA’s failure to investigate their conduct, makes them an important case study in the failures in the industry and the complacency of regulators.

There is no single simple explanation for the failure to ensure that pensioners and their dependants are paid what they are owed. The private fund administrators, the employers and the regulators have collectively failed to build transparent and accountable structures for the management of pension funds. Instead, a system of perverse incentives flourishes. The enormous profit generated both by and for financial-services corporations seems to weigh the balance in their favour and against the human rights of pension fund members and the protection they are owed by the state regulator.

The need for accountability and sweeping reform is obvious and urgent. Justice for millions of pensioners and their dependants depends on it. DM

Unaccountable is an Open Secrets series published on the Daily Maverick and in other new media. The series highlight the profiles of large corporations and private individuals who are all implicated in economic crime and other malfeseance  but have never been held to account for these – or at best escaped substantive justice. This series is a reminder to these corporations and individuals that we have not forgotten.

Should you have any information to search with us please consult our website for the Open Secrets contact details.