SA economy in recession after shock Q4 data, 2019 growth lowest in a decade

SA economy in recession after shock Q4 data, 2019 growth lowest in a decade

Photo by Jason Pofahl on Unsplash

It’s official: South Africa ended 2019 mired in recession. Things have not been this bleak since the global financial crisis a decade ago, and since this data was recorded the coronavirus has started taking its toll on key South African trading partners such as China.

South Africa’s economy in the fourth quarter of 2019 contracted 1.4%, Stats SA said on Tuesday 3 March. That was a far worse showing than economists had expected. A Reuters consensus forecast saw a shrinkage of just 0.1%. As a result of the dismal Q4 performance, South Africa’s economy only grew 0.2% in 2019, its worst showing since the throes of global financial crisis in 2009, when it shrank 1.5%.

This followed a 0.8% contraction in Q3 – a downward revision from a previous estimate of -0.6% – so this also heralds the second recession since Cyril Ramaphosa became President just over two years ago. The roots of the malaise lie with the previous administration, but ultimately the ANC – the party Ramaphosa leads – owns both recessions. Its policies over the last decade have laid the groundwork for epic failure. 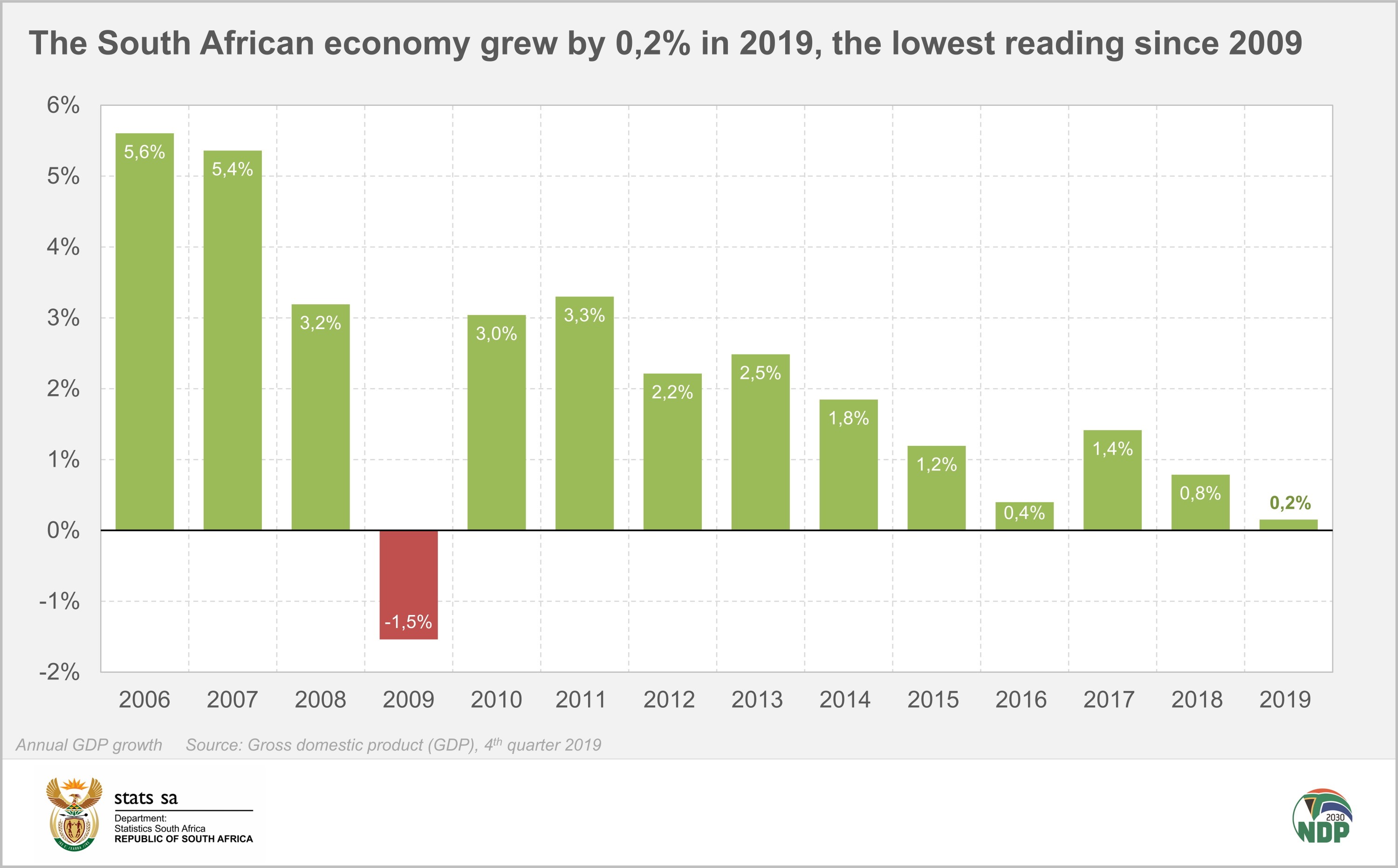 In the 2020/21 Budget review last week, the Treasury had estimated 2019 growth of 0.3%, so its number crunchers have to go back to the drawing board. Its growth forecast of a sluggish 0.9% for 2020 is already looking optimistic, especially with concerns around the coronavirus already hitting the global economy.

Ramaphosa, who often expresses “shock” at various events, said the recession was not unexpected.

“This could not have come as a shock to us because the signs were there. Its been load shedding and the impact on manufacturing and trade,” he said.

He was speaking at an engagement with the South African National Editor’s Forum (Sanef) in Cape Town where the Parliamentary Press Gallery Association (PGA) was also represented.

The market reaction was unfavourable, with the rand extending earlier losses at midday to be 1.5% weaker against the dollar.

Khan noted that this state of affairs highlighted the growing toll to the wider economy of the swelling public sector wage bill, which Finance Minister Tito Mboweni aims to slash by R160-billion over the next three years in the teeth of fierce union and political resistance. The vast sums poured into a sector which is often unproductive have left South Africa with no room to pull fiscal levers to stimulate the economy.

“For the fiscal authorities, it underscores the urgency of capping the public sector wage bill, which has made a minimal contribution to growth and also cost South Africa its ability to oversee any structural transformation, by creating the space for stepped-up investment. The real cost of the public sector compensation bill is how it has choked off other possibilities to generate growth.

The Treasury is now clearly on a pro-growth trajectory, avoiding new big tax measures, and focusing on the structural reforms that are needed for turnaround. The shock nature of this GDP print highlights just how urgent an exercise that is, and how there is no room to get it wrong,” Khan said.

Policy options are limited, to say the least. The South African Reserve Bank’s Monetary Policy Committee (MPC) will meet in two weeks, and it could deliver another rate cut – provided the rand does not go into a complete nosedive between now and then.

Stats SA said seven out of the 10 broad industries that make up the gross domestic product (GDP) figure contracted in the fourth quarter. Construction posted its sixth straight quarter of decline, and the sector has only had growth in one quarter since the start of 2017. This is deeply concerning against the backdrop of an unemployment rate of almost 30% as construction remains a labour-intensive industry that has huge potential to create badly-needed jobs.

Agriculture posted a 7.6% fall in output, while manufacturing declined 1.8%. Drought and load shedding were the two-punch combo here.

Mining was one of the few bright spots, with Q4 growth of 1.8%. This was led by platinum group metals (PGMs), gold and iron ore. Prices for all of these commodities were up in 2019 – PGMs especially have been on a tear – and this has been reflected in higher company profits and fat dividends.

And then there is the coronavirus. In China, the Caixin/Markit Manufacturing Purchasing Managers’ Index (PMI) – a key measure of factory activity – plunged in February to its lowest level since the survey began in 2004.

China has taken unprecedented steps to curb the spread of the virus, which has infected over 80,000 people in the country, and in many regions its turbo-charged economy has all but shut down. This is bound to have an impact on Chinese demand for South African commodities such as iron ore, coal and PGMs, which would take some of the wind out of the mining sector’s sails. It will also affect other South African exports to China, such as agricultural goods. And the economic impact had already spread well beyond China’s borders.

South Africa’s barely-growing economy needs all the help it can get right now, and there is almost nothing out there that could plausibly give it a boost, at least not in the short term, with headwinds aplenty. You know things are bad when a proposed R160-billion cut to public sector wages is touted as the best option available. BM