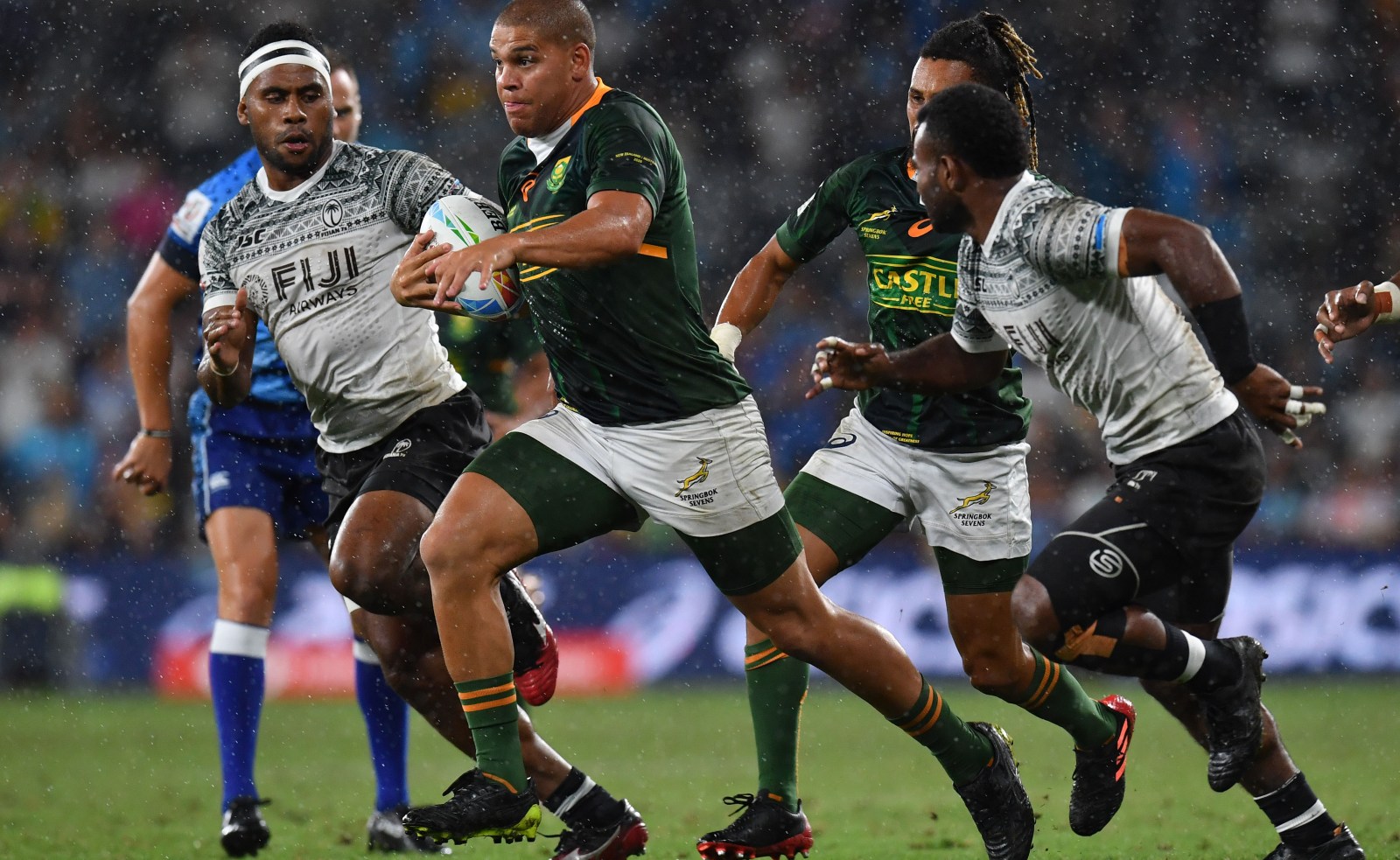 In the shadow of the Hollywood Hills the Blitzboks gave budding scriptwriters plenty of raw material to use as a foundation for a comeback story as they claimed the Los Angeles Sevens title.

On a weekend when South Africa appeared to be out of games on three occasions, they found a way to storm back each time, eventually winning the Los Angeles leg of the World Sevens Series title in dramatic fashion.

The Blitzboks needed extra time to claim a sudden-death 29-24 victory over Fiji in the Los Angeles final despite trailing 19-0 after five minutes. Those are the broad facts about the Blitzboks’ second win of the campaign following their victory in round one in Dubai.

But, as coach Neil Powell pointed out, this was a win for the Blitzboks’ system, which has its foundation in spring, builds through brutal training sessions at the height of summer and hopefully bears fruit like it did in Los Angeles.

The composure, belief and skill to come back from such a huge deficit doesn’t happen by accident. It occurs because there is a strong team culture defined by clarity of vision combined with a powerful work ethic.

“Even when we’re down, the message is always the same. Just look after the system and the system will look after you,” Powell said after the final. “It’s about composure and, if we can stay in the game and put the effort in, we have a chance.

“This win means a lot for the sevens system we have. We wanted to take the momentum of making the Sydney final (in the previous round) into Los Angeles and the belief they showed in the end all comes down to players knowing their roles and responsibilities.”

Those hot summer sessions with the 28 members of the Sevens programme at the Stellenbosch Academy of Sport is where the unseen work happens.

The belief the squad displayed in Los Angeles comes from the hours of training and repetition they endure at the academy in those many months when there are no cameras and no fans to cheer them on.

“A huge factor in professional rugby of any level is player conditioning‚” Sevens High-Performance Manager Marius Schoeman said in an interview in 2019.

“We are able to get that spot on because we have total control over our contracted players. Other national teams simply don’t have that luxury.

“We were the first sevens Academy in the world and England followed us, NZ and Australia starting academies.”

Another, almost unnoticed, factor in the continued success of the national sevens programme is the number of academy tournaments the players experience. With the World Sevens Series comprising only 10 tournaments, the need for actual match experience has to be gained elsewhere.

Which is why Schoeman takes the squad to Uruguay, Chile, Dubai and other parts of the world to compete in secondary events. It’s not so much about winning, but the feeling of playing in a competition, that ensures the players are ready for the big events when they are called up.

Try-scoring hero Sako Makata, who made the crucial touchdown in extra-time against Fiji, is one of those academy players who has had to bide his time on the fringes. Los Angeles was only his seventh World Series tournament.

“Scoring that try means a lot to me because it was a tough weekend in the sense that I had minimum game time,” Makata said after the final. “To have that positive experience in my back pocket is valuable.

“Through patience and doing my job the way we have practised paid off for me. Besides making a contribution on the field, I ensured I did my work properly off the field. In the warm-up I just made sure I was ready for such a moment if it came. I stuck to the process and the plan and with a bit of patience the chance came to me.”

After topping their Pool in Los Angeles, which required a try after the hooter against Ireland to secure a 19-19 draw, the Blitzboks had to face hosts the USA in the last eight in Los Angeles.

In a match where they had few favours from the officials, Powell’s men had to overcome a 10-0 deficit, eventually clawing their way to a 12-10 win thanks to a try 90 seconds from time via JC Pretorius.

Beating New Zealand 17-0 in the semi-finals was the only time the Blitzboks had complete control of a knockout match over the weekend, while that result also had a significant bearing on the overall standings. New Zealand could only earn log 17 points for making the semi-finals while South Africa claimed the full 22-point haul after beating Fiji.

South Africa are only four points adrift of the Kiwis at the top of the standings on 89 points at the halfway point in the campaign.

“What made the guys believe they could still get back into this game was that try just before halftime,” Powell said of Stedman Gans’ try to narrow the deficit to 19-7 against Fiji at halftime. “I could see the belief in the way they played in that second half.

“Even when we were still two tries down with 80 seconds to go, I could see that the players believed in the system. They fought for each other out on the field and they fought for everybody who has been in the system for the past few years. They showed enormous amounts of courage out there.

“The pride and the love the players have for that jersey is something you can’t coach. They never want to let the jersey down. It’s not always about the win and the outcome, but about the effort the guys put in and there was some fantastic effort today.

“We were a little off on day one, but the effort was incredible on day two. The guys just kept on trying to support each other, especially in defence. If one player was beaten, another would make a cover tackle. The work rate for each other was unbelievable.

“If we want to be critical of ourselves despite the result, we were a little sloppy in most of the first halves of every match we played. That’s something we have to improve in Vancouver. If we keep starting slowly we will eventually meet a team who won’t let us come back.”

The World Series moves to Vancouver for round six where the Blitzboks have been drawn in a tough Pool with England, Argentina and Japan. DM