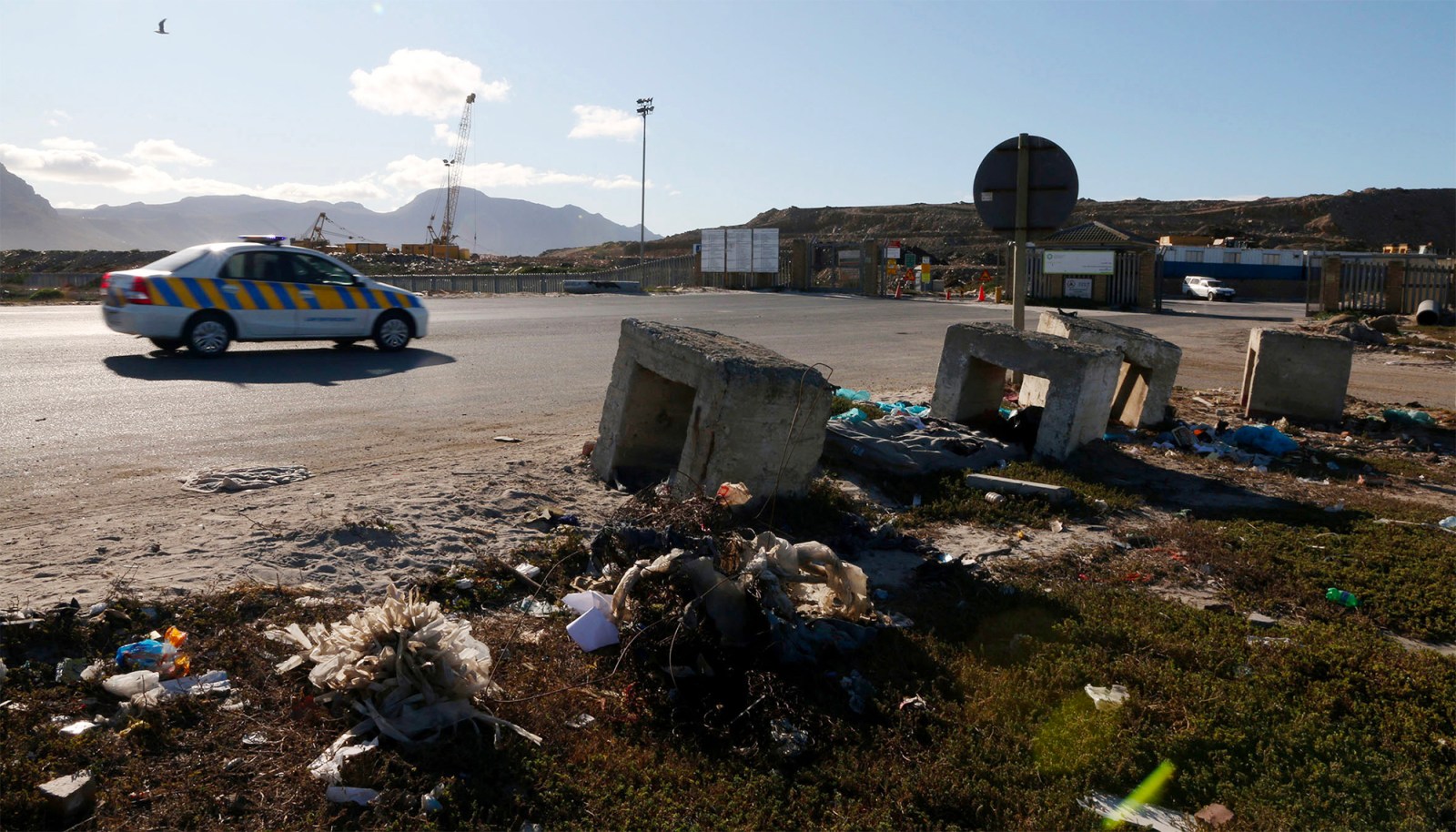 A security guard was murdered and the Coastal Park Landfill Site set on fire in a dispute after waste pickers were denied access to the dumpsite.

The prohibition of waste pickers from accessing the Coastal Park Landfill Site near Muizenberg in Cape Town saw an initial confrontation with security guards on Tuesday 18 February escalate to a group of about 100 people fighting to get in at about 7pm – sunset – last Wednesday 19 February.

Reinforcements were called in the next day and at about 6:20pm on Thursday 20 February, according to police, a 40-year-old man, who the City said was a security guard, was shot dead and robbed.

The City Water and Waste Department, under Mayco Member Xanthea Limberg, released a statement on 26 February after inquiries were made about smoke blowing across to the southern suburbs from fires on the dump. According to the City statement, the fires were lit during a further attack on Saturday 22 February.

A week after the start of the conflict, no authorities had made the information public.

The City said that it was “shocked and saddened by the murder” and the dumpsite “has been under violent attack for almost a week” from “a group of individuals from a neighbouring community”. The landfill is bounded by Capricorn, Vrygrond and Lavender Hill.

Limberg’s media release admits the fires started on the dumpsites “remain a challenge” due to “landfill gases”.

“Additional security personnel have been deployed” and remain on “high alert due to the possibility of further strikes”.

“We are aware that members of the surrounding communities wish to salvage waste items of value as a source of income,” stated Limberg, but “the City is not legally permitted to allow public access to landfills due to the risk of fatalities and injuries on site.”

She said that the landfill has been the target of a number of attacks in recent years, with damage to compactors and bulldozers amounting to more than R5-million as of October 2019.

GroundUp sent questions to Limberg via email both to her direct address and through the City’s media office on 26 February and again on the morning of 27 February. In particular, we asked what law prevented the City from providing waste pickers access to the landfill site, but no answers were forthcoming by our stated 3pm deadline.

Other questions included the name of the deceased security guard, what company he was working for, whether he was alone on the site at the time of the attack, and what was being done for his bereaved family.

The City recognises the waste on the landfill has value and is a source of income. The Waste Act of 2008 gives municipalities power over their landfill sites, so they decide who has access to a landfill or not.

Up to 90% of what is recycled in South Africa (which is about 10% of total waste) is due to the work of waste pickers, who collect both at source and at landfills, says Professor Catherina Schenck of the South African Research Chairs Initiative. This, she says, has been recognised by the Department of Environmental Affairs, which has recently developed guidelines for municipalities on the inclusion of waste pickers into recycling strategies.

The Waste Picker Integration Guideline for South Africa forms part of the national waste strategy, which is a directive of the Waste Act, 2008.

She said the guideline would bind municipalities to work within a particular framework, which includes how to work with waste pickers and manage landfills.

Dr Melanie Samson, senior lecturer in geography at Wits, has been facilitating the development of the guideline. She said the general assumption by municipalities is that they know best when it comes to dealing with waste pickers.

“It’s a top-down approach and there’s a lack of meaningful engagement in the development of recycling programmes,” said Samson. This meant that recycling or reclamation programmes developed by municipalities often disrupted an existing informal system.

Rather, municipalities needed to recognise waste pickers have been collecting waste for a long time and have developed expertise and knowledge that results in our recycling being “on par with some European cities”.

She said if waste pickers are not included in recycling programmes, or denied access to waste reclamation, it meant their livelihood was taken away.

In Latin America, the Inter-American Bank has developed a policy that if a landfill was closed, the authorities had to negotiate with the waste pickers and develop a social plan to compensate for their loss of livelihood. Training programmes needed to be provided to enable them to pursue new avenues of income, and if they lived on the landfill, alternative accommodation needed to be provided.

“We need to be doing the same thing in South Africa,” said Samson.

However, she said working on a landfill was a last resort. Most landfills were exposed to the elements and lacked access to shade, toilets or drinking water. There was also the danger of exposure to toxins and sharp objects. Interviews with waste pickers revealed they wanted safe access to recyclable material in a clean environment which meant separation of waste at source was ideally required.

She said municipalities needed to stop working in the “charity model” and recognise that waste pickers made an important contribution to waste reclamation and recycling. As such, they needed to be included in all the planning and decision-making on waste minimisation.

What was required was for waste pickers to establish properly representative committees. The Johannesburg-based African Reclaimers Organisation, formed in September 2018, is one of the first such in the country. The organisation’s active Facebook page states that it started as the Interim Johannesburg Reclaimers Committee, formed as a response to the City of Johannesburg’s decision to displace informal recyclers by paying private companies to collect recycling materials from high-income suburbs in the City.

African Reclaimers Organisation representative Eli Kodisang could not be reached on his cellphone number and no response to email was forthcoming.

Samson said Cape Town, like Durban and other municipalities, has the challenge that waste pickers are not yet organised, but instead of waiting for them to organise themselves, municipalities need to provide resources to assist them to do so.

She said the national guidelines were in the process of being distributed to municipalities by the Department of Environmental Affairs (DEA), but no official launch had taken place as yet.

The DEA did not respond before deadline to questions on whether the City of Cape Town had received the guidelines yet.

Samson said integration of waste pickers might prevent conflict such as the tragedy at the Coastal Park Landfill Site, but it was possible “gangster elements” had infiltrated waste picker communities, which could be seen in other municipalities. But this was a factor that had to be taken into account by municipalities.

“You have to approach it with open eyes and factor in that you’re dealing with social issues.” DM