Proteas need to back up strong T20 World Cup start when... 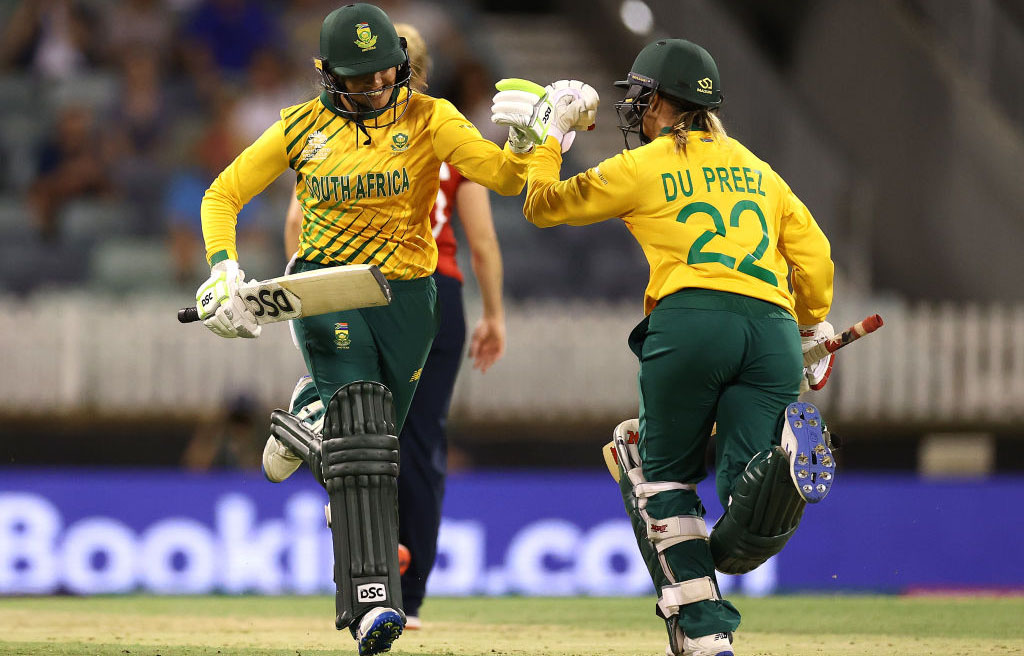 South Africa beat England by six wickets during the Women's T20 World Cup, 23 February 2020. The Proteas are preparing to face Pakistan, in their first match in almost a year, in a series that will consist of three ODIs and the same number of T20s. (Photo: Twitter/@ICC)

The Proteas understand the need to back up their vital win over England with another clinical performance when they meet Thailand at the ICC Women’s T20 Cricket World Cup on Friday.

Patience is a key aspect needed in cricket to be successful, but even by the sport’s standards, waiting 11 years to beat England at a major tournament was a long time.

Thanks to Mignon du Preez’s calm approach when needing nine off the final over in South Africa’s opening game of the T20 World Cup, the Proteas ended that winless drought. Their patience paid off, fittingly, with their most experienced player steering them over the line.

Long after the final ball was bowled, the strains of South Africa’s unofficial sports anthem Shosholoza were heard wafting across Perth’s famous WACA ground. Victories, especially important ones, need to be celebrated even if briefly at a tournament such as this, where games come thick and fast.

It was the perfect start to the tournament. South Africa arrived in Australia as outsiders and have quickly moved into the sphere of ‘dangerous contenders.’

Du Preez, one of the real superstars of the game and in her 13th year at this level, revelled in that performance that saw her score 18 off 11 balls to complete the victory after captain Dane van Niekerk (46) and Marizanne Kapp (38) put in 84 for the second wicket to set a foundation.

Like the team, Du Preez has matured and experience is what is proving vital to her and, by extension, the squad.

“Once you realise as a batter that you’re going to have more bad days than good, you just need to enjoy those good ones when it’s your day,” a philosophical Du Preez said.

“Turning 30 has helped me grow a lot more. Retirement is inevitable, so I just want to make sure that during these next few years, I have fun. I’ve played enough games in my career to be able to step up in crucial moments and I think to finally do that and contribute to the team is really special.

“It was nice to finally beat them (England) in an ICC tournament. This is the seventh one I’ve played in and we’ve never got close before. To put that behind us and move forward is really exciting. We’ve always known how strong we are and that within the team we have match-winners but we had a monkey on our back.

“This will give us the boost we need to go one step further than the semi-finals and take a World Cup trophy home. We know we’re good enough, we just have to play well and enjoy it.”

As ever in elite sport, the next challenge is always looming and for the Proteas there was little time to celebrate their six-wicket victory over England before focus shifted to rank outsiders Thailand whom they meet in Canberra.

On paper the outcome of this match should be a formality, but complacency is not part of the Proteas’ mental make-up. Thailand will receive as much respect and analysis as England.

Thailand have so far lost their two matches at the tournament, by 98 runs against England and by seven wickets against the West Indies. The clash against South Africa will be their third game in eight days while the Proteas are only playing their second match in nine days.

“We knew it would be a tough game against England, so to get on top of them was big for us,” Chloe Tryon said. “We executed our plans and skills really well in that match.

“The team has evolved over the last few years. We made the T20 World Cup semi-finals in 2014 and coming into this tournament that was our minimum goal for this year.

“Beating England was a good start but we have a lot to do. After the last T20 World Cup (in the Caribbean where SA failed to make the semi-finals) we all took some time to reflect deeply.

“Everyone accepted responsibility and has worked really hard, collectively and individually to improve. A lot of the girls played in Australia Big Bash League, which has helped too.

“We all have a better understanding of our own games now. As far as Thailand goes, we won’t take them or any team lightly. We just want to go out and execute our skills.”

The match starts at 6am South African time on Friday. DM