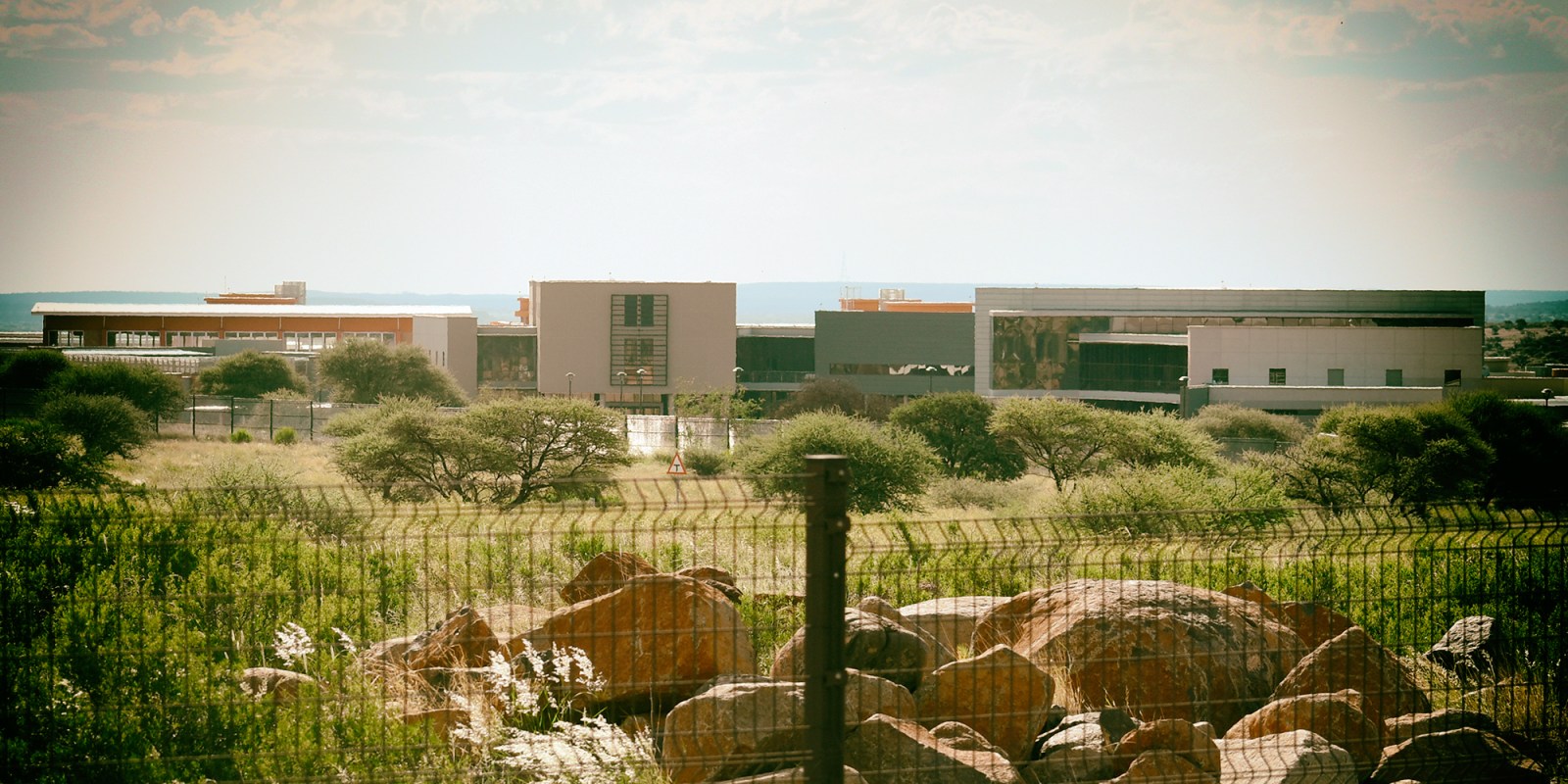 Seven kilometres from Kimberley’s famous Big Hole sits another of the mining city’s record-breaking landmarks: South Africa’s most expensive mental health hospital. It is running at less than half of its full capacity.

With a price tag estimated at about R2-billion, the Kimberley Mental Health Hospital in the Northern Cape certainly left a big hole in taxpayers’ pockets. Originally budgeted at R290-million, costs ballooned as construction dragged on for 13 years. For long periods, the building site perched derelict and ghostly on the city’s fringes, with vandals and weather conditions destroying existing structures.

“A monument of corruption at an unprecedented scale.” This is how Northern Cape Premier Zamani Saul described the hospital at its official opening on 30 September 2019. Media reports have recorded the hospital’s estimated cost at different amounts. When Spotlight put the “R2-billion” figure to Northern Cape Health MEC Mase Manopole, she concurred. It would appear that the exact extent of cash squandered on the hospital over past years is hard to compute.

Set among thorn trees scattered over dusty koppies, the new hospital sprawls across 336,000m² , its 36 orange and grey blocks jutting against the sky.

Today, despite its impressive exterior magnitude, the hospital is still running at less than half of its full capacity. Of its 287-bed potential, only 110 patients can be admitted. This, top management says, is due to a lack of funding for staff and medical supplies.

As a Hawks investigation into the corruption allegations nears completion, Manopole, in an encouraging show of candour and transparency, arranged for Spotlight to be taken on a tour of the premises.

At the hospital’s glass-encased administration wing, its Chief Executive Officer, Albert Links, Acting Nursing Service Manager, Victoria Nero and Assistant Director of Security, Clement Kaotsane, welcome Spotlight inside. Speaking in the foyer, an agreement is reached that no wards with patients may be visited, so as to protect their privacy.

We make our way to a boardroom on the second floor. Underfoot, pale tiles gleam in the sun. Walls are pink and grey with chrome handrails flanking the stairs. “It’s beautiful, isn’t it?” asks Nero. “We really hope it stays like this, we hope and pray to God.” Among the three, there is a tangible sense of pride.

At the boardroom table, the hard questions are directed at Links. Given that it took 13 years to complete the hospital at an estimated cost of R2-billion – why is even more money required to open the entire facility?

“So, the money spent, that which you are referring to now,” says Links, “it was the infrastructural spend for the building. Now that the hospital infrastructure is eventually done and officially launched by the premier, now we need to operationalise it in terms of getting services running. Now we have operational costs, goods and services, human resources. The hospital has a 287-bed capacity and we have 110 patients at the moment. We will be phasing it in; we will phase in the operationalisation of the entire 287 beds subject to the availability of funding over the mid-term, starting with this financial year 2020/2021.”

And the corruption allegations? “Obviously I cannot comment on those as an investigation is being undertaken,” says Links. “All we can say is that there was alleged corruption and that it is currently before an investigation. All of that, it came before my time.”

Links started his tenure as CEO at Kimberley’s old West-End Hospital in June 2019, later transferring with patients to the new hospital premises. All patients have now been transferred and the hospital’s 110 available beds are occupied.

In terms of human resources, at present the Kimberley Mental Health Hospital can afford to appoint four psychiatrists and 80 nurses. “We are looking at increasing that,” says Links. “But this number is reasonable for our current intake of 110 beds. We are breaking even. When we speak of opening more beds, we will need more staff. The problem is that the budget is not always sufficient to recruit and appoint a workforce.”

Links notes that human resources is a national problem, saying that at President Cyril Ramaphosa’s Presidential Health Summit in Gauteng in October 2019, “workforce” was flagged as a major challenge to South Africa’s health system at large.

The Kimberley Mental Health Hospital accepts patients from all over the province, he says. How are they admitted? “A patient first undergoes 72 hours of observation at a general hospital before they are transferred here,” he says. “So, they come from all of the district hospitals. Then we will plan for admission, because obviously there’s always the pressure of beds. That’s a challenge that we have.”

“Look,” he adds, “In mental health history – throughout the country – in the older times, patients would just be dumped at mental health hospitals, because their families could not handle them. Now the Mental Health Act has been revised and reviewed and there’s a new mandate (17 of 2002) that takes into account human rights.”

“We have voluntary patients, referred by general practitioners, someone who says ‘I have a problem, I need admission’. Then assisted, or involuntary patients, who don’t have that insight or judgment – they are admitted by a family member, or clinician who makes the decision on their behalf, in the best interest of that person and for the safety of the community.”

“Psychosis can be a variety of typical illnesses. There’s your schizophrenia. There are people with bipolar mood disorders, typical depression and anxiety disorders, and so on. We see the entire spectrum here.”

Nero weighs in on caring for patients. “If we do what we are supposed to do, we don’t get difficult patients,” she says. “I always say to the staff at the induction and orientation, that they must remember: ‘Patients are human beings. When someone teases you, you are allowed to get angry. If you just received bad news, you will start crying. We need to understand patients will also get angry, they will also cry.’ As nurses, we are trained. Now you can see: ‘Oh there’s something wrong with this patient.’ We will sit down with that patient and talk and if it’s something that really needs the intervention of the doctor, we call them.”

One of the seclusion rooms in the hospital. PHOTO: Emile Hendricks/Spotlight[/caption]

Later, while walking around the State Patient Unit – in the M Block – Nero points out a “seclusion room” attached to a ward. The spacious room has a mattress on the floor, a window to the outside, a window looking out onto a communal area, a loo and a washing basin. There are no sharp corners or edges – taps are operated by flat buttons built into the wall and the water spout is rounded.

“If the patient gets aggressive, the seclusion room is where he, or she is restrained,” says Nero. “The doctor will come and prescribe medication to sedate them. The important thing is that it must not be seen as a punishment for the patient. It really is to protect the patient from harm and to protect the staff. The nurses will do observations, maybe every 15 minutes, or half an hour.”

Links adds: “When people hear restraint they think of chains. No, we don’t do physical restraint. There are no straitjackets, no chains, no handcuffs. No, no, we simply isolate the patient next to his, or her ward in the seclusion room.”

The Kimberley Mental Health Hospital is situated down the road from the city’s prison. The hospital is supposed to house “forensic observandi” – prisoners who need to be observed over 30 days to ascertain whether they are mentally fit to stand trial, or not – but at this point, it does not have the capacity.

Presently, prisoners suspected of ill mental health are kept at the prison, with state psychiatry teams travelling to the prison to do the observations. However, at the time of our interview, 68 prisoners needed to be observed in this manner, with state capacity to observe only three such prisoners a month. This bottleneck poses a dire challenge to the department of health, to correctional services and to the justice system.

Should a forensic observandi be found unfit to stand trial, he or she becomes a state patient. “A state patient is someone who committed a serious crime,” says Links. “And according to the observations done by our team, he or she cannot be held liable. So, currently we have 39 state patients.”

At the time of Spotlight’s visit, the M Block’s 80 beds were empty – with the 39 state patients set to be transferred from the West-End Hospital soon after. This week, Nero confirmed that the state patients were successfully transferred to the new facility.

Inside the section, bright couches adorn communal spaces, with flatscreen televisions mounted on walls. To one side, a fenced-in courtyard is covered in astroturf. Along gleaming corridors, the smell of disinfectant hangs in the air. Bedrooms are sun-washed with lime green beds covered in blue bedding.

Do patients get better at the mental health hospital? “Certainly,” says Links. “Patients who come in here, they don’t stay forever. The average length of stay for a patient is 17 days. Sometimes more, due to factors like social reintegration and so forth.”

Our tour of the facility finished, the question hangs in the air: Is it not a waste of money to build a facility this large, if there isn’t an available budget to put it all to use? Links simply raises his shoulders: “Unfortunately, yes.” MC