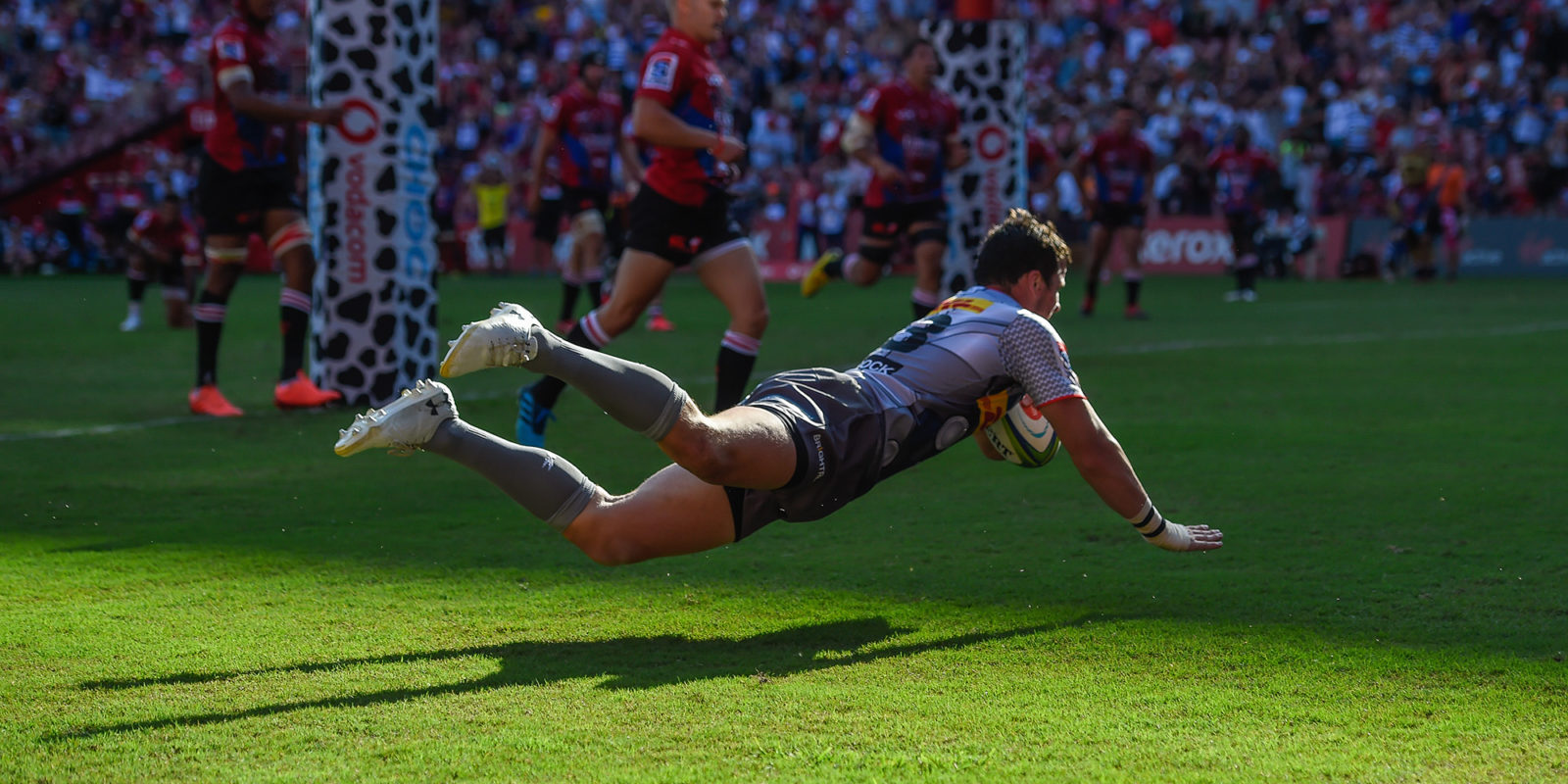 Ruhan Nel scores the winning try for the Stormers against the Lions at Ellis Park on Saturday 15 February 2020. (Photo: ©Christiaan Kotze / BackpagePix)

The Stormers’ 100% start to the season after three rounds of Super Rugby is not unprecedented, but it puts them in the conversation as a team destined for the play-offs.

Naas Botha famously said that the Currie Cup was not won in May. Super Rugby’s season is now so long that it’s only the middle of February and already three rounds of the 2020 tournament have been played. But Botha’s old adage is true of Super Rugby, albeit it’s mid-summer and not the beginning of winter. Super Rugby is certainly not won in February.

For the Stormers though, after winning three from three which leaves them top of the overall standings with the Chiefs who are also unbeaten, it’s a sign that they are moving into unusual territory. They are suddenly favourites to win the South African Conference. Considering where they have been for the past two seasons – missing the eight-team play-offs – it’s a heady turn-around with largely the same group of players.

It’s not just that they have won thrice that has started the murmur, but also the nature of their fixture list. The Stormers have home games against the Jaguares and struggling Blues to come in the next two weeks. Their previous two matches at Newlands in rounds one and two of the 2020 tournament have yielded 40 points with none conceded.

They’ve taken crucial wins against direct conference rivals the Bulls (a 13-0 win at Newlands in round two) and a vital 33-30 away win over the Lions in round three.

Their squad will also be bolstered but the return of scrumhalf Herschel Jantjies and flank Jaco Coetzee for round four. Captain Siya Kolisi and hooker Bongi Mbonambi remain on the injury list though.

The Jaguares, Super Rugby 2019 runners-up, will pose some tough questions for the Stormers. But considering that the South Americans will be slightly fatigued after a long haul to Cape Town via Sao Paulo and Johannesburg, the Stormers couldn’t have asked for a better time to catch them.

If the Stormers keep to their script of home domination against the Jaguares, they will move into the heady stratosphere they occupied in 2011 and 2012 when they won their opening four matches on the trot. With the Blues to follow, the Stormers could be well on their way after five rounds.

Coach John Dobson is naturally satisfied with the results, but he is far from glowing about his team’s performances. The Stormers needed an injury-time try from centre Ruhan Nel to beat the Lions in their round three clash at Ellis Park.

It was the first time in five years the Stormers had won in Johannesburg, which was another positive tick even if the performance, particularly when they surrendered a 26-15 lead in a 10-minute spell late in the game, was inconsistent and at times sloppy.

Dobson’s realism and high expectations are another good sign for long-suffering Stormers fans. The coach is demanding more while winning and despite much room for improvement.

“We are not even operating at half our capacity‚ which is frustrating‚” said Dobson on Saturday 15 February, following his side’s win at Ellis Park.

“The good thing is we are playing with character. I want to see us play more rugby. To win three from three and not be fully firing is good. We’ve got Herschel Jantjies back next week and Jaco Coetzee. We are in a good position going forward.”

Dobson said his side was ready for a different challenge against the Argentineans in round four after the helter-skelter encounter against the Lions.

“Next week is an absolute humdinger between the conference favourites and an unbeaten side,” Dobson said. “The Jaguares are a physical team but they are slightly different to what they were last year because of some personnel changes.

“Newlands is a different environment to Ellis Park because you don’t quite get the same speed. Against the Jaguares, we will go back to our traditional game with our forwards carrying nicely and hopefully creating space for our backs.”

At this early stage, the Stormers’ only real local challengers appear to be the Sharks. The Durban-based outfit suffered a 38-22 loss against the Hurricanes in round three, but they are still handily placed after winning their opening two matches.

This included a superb win over the Highlanders in Dunedin in round two. In the 25-year history of Super Rugby, South African teams have won only 21% of their matches in New Zealand (53 wins from 259 encounters), so a 50% winning ratio in New Zealand for the Sharks in 2020 is a massive boost.

They have also grown in terms of their playing style after some turgid seasons under the dour and dull Robert du Preez. New coach Sean Everitt has brought a smile back to their play.

The experience and class of captain Lukhanyo Am and fellow World Cup-winner Makazole Mapimpi is filtering through to the rest of the team. New acquisition Sikhumbuzo Notshe has given the loose trio balance. His ability to link with the backs has added a new attacking dimension to their play.

As expected, the Sharks’ real strength has been their backline, but the pack has been surprisingly competitive. It has provided enough quality ball for the men behind to show off their skills. If that pattern continues, the Sharks will become a team no one will relish taking on, especially if they can bring fullback wunderkind Aphelele Fassi into play more often.

The 22-year-old makes some mistakes, but his balance, vision, pace and poise are reminiscent of the great Andre Joubert. As a fullback, there is no higher praise and if his development graph continues on the same trajectory, Fassi will be wearing green and gold later this year.

The Stormers and Sharks and setting the standard for South African teams while the Lions and Bulls still have time to find their stride. Super Rugby 2020 is far from decided, but at least the feel-good factor from Rugby World Cup 2019 continues to emanate through the positive performances of the Sharks and Stormers in 2020. DM