Celebrating the (un)forgotten heroes of the struggle 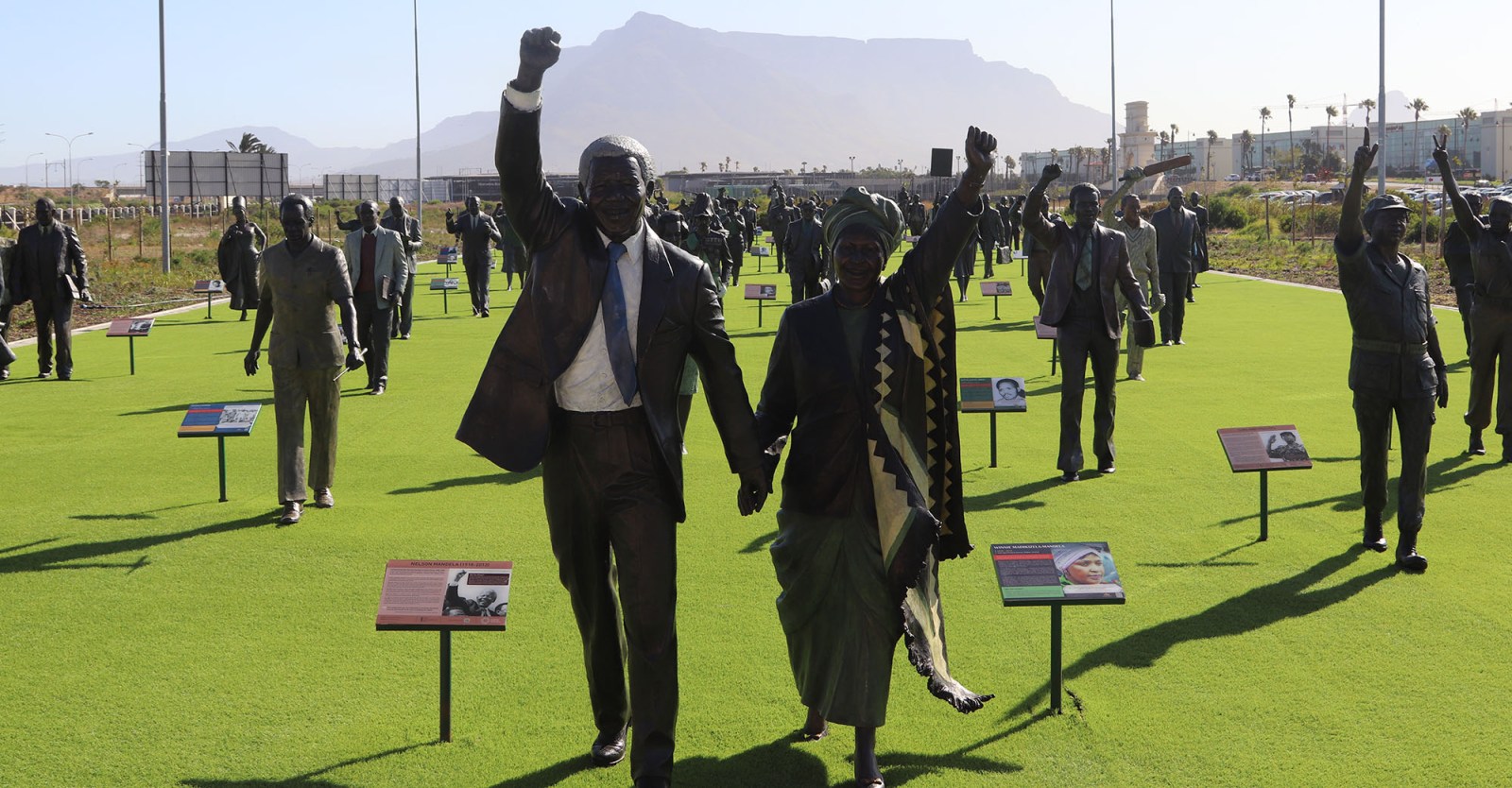 The 30th anniversary of Nelson Mandela’s release from Victor Verster prison falls on 11 February 2020. But while we celebrate Mandela’s legacy, we often forget to acknowledge the lesser-known heroes of the struggle. An art exhibition, spanning 350 years of history, aims to bring those activists to the fore while telling the complicated story of South Africa’s past.

Hidden in the heart of Century City, Cape Town, is a procession of 100 life-size bronze statues. The exhibit is called the Long March to Freedom, a project aimed at commemorating heroes of the liberation struggle.

It spans as far back as the 1600s, from the KhoiKhoi who resisted enslavement by Dutch settlers to the traditional chiefs who fought against British rule and well-known activists of more recent years such as Walter Sisulu, Oliver Tambo and Nelson Mandela positioned at the front of the procession to mark those who helped usher in South Africa’s democracy.

“One of the aims of the exhibition is to give people back their pride in their own history and heritage,” said Sarah Haines, Director of the National Heritage Monument which oversees the exhibit.

Part of that history is commemorating lesser-known anti-apartheid activists. When asked who she felt were the forgotten heroes of the struggle, Haines said it was the women.

“They weren’t so much forgotten, but the women of the women’s march era had it really tough. To take on the government in the way that they did… was one of the most moving stories.”

The famous protest ending at the Union buildings in 1956 led, notably, by a multiracial collective including, Rahima Moosa, Lilian Ngoyi, Helen Joseph and Sophie Williams, was a rally against the apartheid government’s decision to extend pass laws to include black women.

The women carried stacks of signed petitions which were left at then Prime Minister Hans Strijdom’s door.

This women’s march was the biggest, but it wasn’t the first.

In October 1955, a smaller march to the Union buildings was organised by the Federation of South African Women (FEDSAW) when the announcement was first made that black women would be forced to carry the “dompas” in 1956.

“One of the most important things is to give people back their history, because it got lost,” said Haines. And although the role of women in the struggle was never “lost” per se, it has been under-emphasised.

Born in 1874, among her achievements was that she was the first black South African woman to earn a university degree and was the founder of the first South African black women’s movement, the Bantu Women’s League.

The movement, which was initially a branch of the African National Congress, later became the official ANC Women’s League.

Maxeke, however, was barred from joining the party as women were not accepted until 1943.

Yet as early as 1913 she helped organise the anti-pass demonstration in the Orange Free State where pass laws already existed against women. It included roughly 300 women and was one of the first of its kind.

“I call her my Mrs First,” said Moroesi Tsatsi, a tour guide at the exhibit.

Tsatsi, who has been working with the National Heritage Monument for a number of years, says that interacting with the exhibit has forced her to grapple with a lot of her anger about the past.

“It becomes personal,” she said.

But she believes it’s a worthwhile opportunity to deal with the pain caused by apartheid.

“If every South African came here, they could be at peace,” said Tsatsi, who lost her father during the liberation struggle.

Tsati, who grew up in Soweto, recalls her father leaving home to fight in the struggle. And one day he just didn’t come home.

“I remember, my father taught me struggle songs. The night before Mandela was released, we sang the whole night,” she reminisced.

“The apartheid history is not a pretty history. And as much as we want people to celebrate how far South Africa has come, we do want people to understand where we came from,” said Haines.

The 100 statues represented are only a quarter of those the project aims to produce.

“We’ve got a list of about 500,” explained Haines, adding that the National Heritage Monument struggles from lack of funding, inhibiting its ability to maintain the statues and market the exhibit.

For now, the project is mainly funded by the Lottery Commission. Haines says they are reaching out to corporates to help fund guided tours for school children.

The idea for the Long March to Freedom exhibition came about in an unusual way.

The story goes that Dali Tambo, the son of late anti-apartheid hero, Oliver Tambo, went to visit his father’s grave. There Tambo expressed dismay that a statue of his father didn’t exist anywhere in South Africa and he planned to erect one. His father spoke from beyond the grave and said: “Don’t do it for me, do it for all of them.”

A large team of close to 50 professional sculptors has brought Tambo’s vision to life. The project has also partnered with the Tshwane University of Technology to form a mentorship programme with 14 fine arts students. As a result, three of the statues in the exhibit were created by the students.

Haines says they have plans to expand the exhibit to include those who are not represented.

“We want people to contribute and tell us about people who are not represented, for example, people who died in exile and were never found.”

She emphasised that it was not an “ANC” exhibition, but the project aims to tell a holistic story of the journey from slavery through to liberation, which in future will have more input from the public.

“We want to say please, tell us about people that have been forgotten.” DM

The Long March to Freedom exhibit is open Monday to Sunday. Guided tours can be taken daily from 10am to 4pm. Tickets are available at the door or at Computicket.