China turns the screws on Eswatini 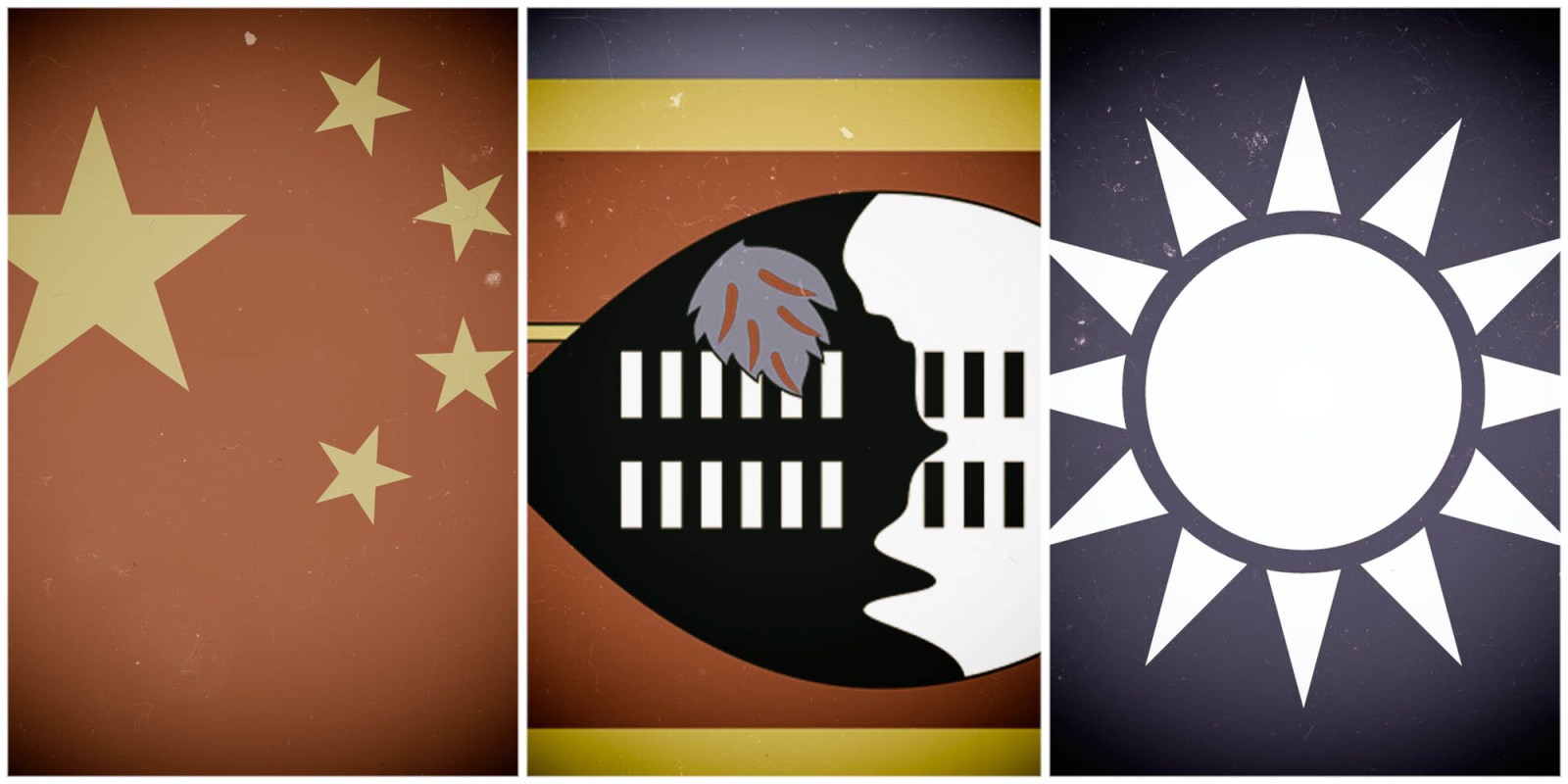 China has thrown down the gauntlet over Eswatini's relationship with Taiwan. (Images: www.countryflags.com / wikimedia)

China has stepped up its pressure on Eswatini to dump Taiwan by threatening to cut all trade should the absolute monarchy not recognise its One-China policy.

China is threatening to “cripple” Eswatini business and economic development should it not switch allegiance from Taiwan to China immediately. In a strongly worded and threatening seven-page statement, China’s ambassador to Pretoria, Lin Songtian, said “no diplomatic relations, no more business benefits”.

He also implied that other African countries could be pressured to shun Eswatini at the African Union – set to have its heads of state summit next weekend in Addis Ababa, Ethiopia. South Africa will be chairing the AU this year. The absolute monarchy is the only country on the continent that maintains official diplomatic relations with Taiwan, which means it has no relations with China.

Lin said in his statement that, since 10 January, Eswatini citizens have been forced to apply for visas to the People’s Republic of China at the embassy in Pretoria. They could no longer use any other embassies, consulates or outsourced visa services, which meant that would-be visitors were not only inconvenienced, but the embassy could also keep a tight watch on those planning to travel.

“Such an embarrassing situation is the result of Eswatini defying the One-China Principle and maintaining so-called ‘diplomatic ties’ with the Taiwan authorities, a province of the PRC,” he said. Lin explained that Taiwan was “no more an existing country in the world” but that the “Republic of China” was “abandoned and overturned by the Chinese people” in 1949. China considers Taiwan a part of it, and the state a rogue state.

Lin said the One-China principle was enshrined in the United Nations Resolution 2758 in 1971, and all UN member states – including Eswatini – were obliged to abide by this.

The embassy’s move roughly coincided with Taiwan’s re-election of Tsai Ing-wen as president in its 11 January elections and comes at a time when Hong Kong protesters and voters shunned what they regarded as authoritarianism from China’s side. Tsai vowed to preserve Taiwan’s sovereignty in what could be interpreted as a blow to Beijing. A friendly government in Taiwan might have been persuaded to cut its official diplomatic ties with 14 UN member states, including Eswatini. In a small victory for China in September last year, the Solomon Islands ended its 36-year relationship with Taiwan.

China is still hopeful. “The great national reunification of China including Taiwan is [an] irresistible and irreversible trend that no one or force can stop,” Lin said, adding that Tsai’s election wouldn’t change this “basic fact”. A number of countries recognise Taiwan without maintaining formal relations.

Lin said the People’s Republic of China – the second-largest economy in the world after the United States – was Eswatini’s second-largest trading partner. Although it’s known that South Africa is the absolute monarchy’s largest import and export partner, China’s claim could not immediately be verified. He said: “To maintain such an immoral and abnormal relations [sic] with Taiwan authority politically disregards the Eswatini national dignity, economically disregards the interest of its country and people.”

Lin warned things couldn’t continue the way they were: “Eswatini has been benefiting greatly from business relations with the PRC while refusing to recognise [the] One-China policy, which relates to the core interest of China and the sentiments of [its] over 1.4 billion population.”

He said China had “no choice but to close all the windows in the world” to Eswatini, with the exception of its embassy in Pretoria, but claimed this was Eswatini’s fault entirely.

“The door of the Chinese embassy here in South Africa is open for Eswatini government and people to talk with and find a proper solution to change such an embarrassing situation for win-win cooperation.”

He said China had offered the rest of Africa – which recognises its One-China policy – many development opportunities and assistance.

“If the Eswatini people get out of the kingdom to Malawi, Zambia, Zimbabwe, Kenya and Ethiopia to just have a look by eyes instead of getting news from Western media, you will understand how the world has changed and what China’s policy to [sic] and has done in Africa,” Lin said.

He also gave an insight into China’s approach to Africa. “It is our belief that it is better to empower people how to fish than to give him fish,” he said. “China not only gives African countries fish, but prefers to empower them how to fish.” This means China would support the countries’ development plans for major infrastructure and to help it build capacity for development that could sustain itself. Lin said with China’s help, 20 African countries had achieved a GDP growth rate of over 5% in 2019.

Lin said Eswatini was putting the rest of Africa in an uncomfortable position. “It is very hard for the friendly African countries of China to attend any AU summit hosted by a country refusing to recognise One-China Principle and maintaining so-called ‘diplomatic ties’ with Taiwan,” he said. Eswatini had initially hoped that it would be hosting this year’s mid-year AU gathering and, with Taiwan’s help, started erecting a massive convention centre and a hotel at a cost that stood, a year ago, at R4.8- billion.

In an interview in December, shortly after he returned from a stint of leave of more than a month, Lin blamed King Mswati III for Eswatini’s continued relations with Taiwan. “It is just benefiting one family and forgetting all the people in that country. It’s a shame.”

China last year organised a study tour for Eswatini members of parliament who have since unsuccessfully tried to convince Prime Minister Ambrose Mandvulo Dlamini to establish an economic, trade and tourism mission with China. With this latest move, which is aimed at the business community, China could be hoping to turn up the pressure on the monarchy, which wields the ultimate power.

One of the MPs, Marwick Khumalo, warned that the latest move by China meant Eswatini’s economy was at stake and said the government should tend to the matter urgently. Government spokesperson Percy Simelane told the Swaziland News China’s statement was issued from an “offside position” and the country should rather engage Eswatini diplomatically.

“Eswatini will continue to monitor the situation hoping it is not about hammer and anvil diplomacy aimed at welding Eswatini into unjust submission,” Simelane said.

Taiwan’s ambassador to Eswatini, Jeremy Liang, has accused China of bullying and interfering in Eswatini’s domestic and foreign policies, and of unjustly targeting the private sector. Eswatini has had unbroken relations with Taiwan since its independence in 1968. DM