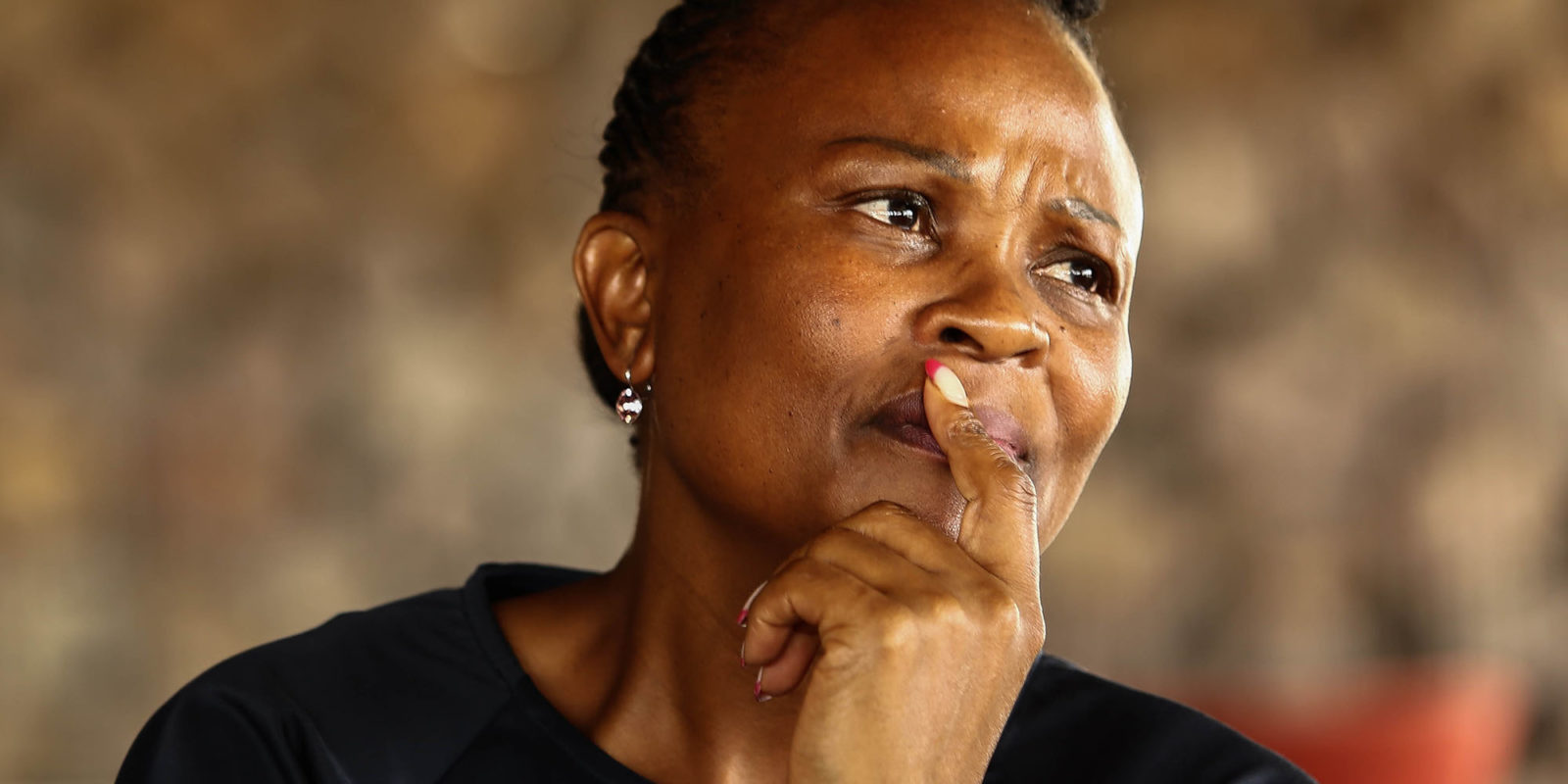 The rules of Parliament are the rules, and if Public Protector Busisiwe Mkhwebane disagrees, the only way to get them changed is to go to court. Not publicly calling for a ‘temporary suspension’ of the parliamentary process now under way to look into her removal for some so-called ‘amicable’ what-what.

A public protector, appointed on the recommendation of Parliament, can be removed by Parliament on grounds of misconduct, incapacity or incompetence in terms of Section 194 of the Constitution, headed “removal from office”.

All that is required is “the adoption by the (National) Assembly of a resolution calling for that person’s removal from office”— and the support of two-thirds of the House in case of the removal of a public protector, or an auditor-general.

Just an ordinary majority of 50 plus one is required for the removal of any other heads of institutions established in Chapter 9 of the Constitution — the Electoral Commission of South Africa (IEC), the South African Human Rights Commission (SAHRC), the Commission for Gender Equality and the Commission for the Promotion and Protection of the Rights of Cultural, Religious and Linguistic Communities.

In Section 57 the Constitution makes it bluntly clear the National Assembly alone is responsible for determining and controlling its own internal arrangements, proceedings and procedures.

And that’s what Parliament did.

The timeline is a bit twisty. Much was interwoven with governing ANC factional politics — the constitutional two-thirds majority in the House means that without the ANC the public protector stays put — official kicking for touch and obfuscation.

In February 2019 the justice committee, which had stalled in twists of ANC factional politicking in dealing with a September 2017 DA request for the removal from office of Public Protector Busisiwe Mkhwebane, finally decided to kick the matter to the post-May 2019 election.

The new Parliament did that after then DA Chief Whip John Steenhuisen in late May 2019 wrote to the new National Assembly Speaker Thandi Modise, reiterating his request for a decision on Mkhwebane’s removal proceedings. Modise passed on the request to the justice committee.

In July 2019 Mkhwebane entered the fray, claiming unfairness, bias and sharply criticising Modise for failing her constitutional duty to protect the head of a Chapter 9 institution, in a letter dated 5 July 2019, seen by Daily Maverick.

“I consider it a sacred duty to assist the Speaker and any committee of Parliament to make decisions that are compliant with the Constitution and the rule of law,” Mkhwebane wrote, adding later:

“Parliament does not seem to have rules in place to deal with these issues and the constitutional violation is further exacerbated by the failure to put in place rules aimed at ensur(ing) that the public protector is not forever at the mercy of those with retaliatory motives and those who seek vengeance for her adverse findings against them”.

This is important because it’s a theme Mkhwebane returned to on Tuesday 29 January 2020, when she cited bias, unfairness and conflicts of interest in Parliament — from the Speaker to those sitting in the benches — as the reason why proceeding to look into her removal from office should be temporarily suspended.

Or as Mkhwebane put it at Tuesday’s briefing:

“I have further requested an undertaking from the Speaker that this grossly unfair process be temporarily suspended until all the issues I raise above have been adequately addressed amicably”.

In late August 2019, the justice committee decided that due to the lack of rules it could not actually deal with the removal of a public protector. It was a case for the rules committee.

Steenhuisen cheekily sent through some draft rules to Modise. But in the party political discussions at the rules committee, the rules were properly crafted from scratch.

On 26 November 2019 the multi-party rules committee unanimously approved the new rule “Removal of Officer Bearers in Institutions Supporting Constitutional Democracy, which was published on 28 November 2019 in the Announcement, Tablings and Committee Reports (ATC), or work record of the national legislature”.

On 3 December 2019, the matter came to the House. ANC Deputy Chief Whip Doris Dlakude, in introducing the rules committee report, said the new rules — effectively a four-stage process from a substantial motion, a panel of experts a committee inquiry, to a vote in the House — “importantly… rest on the principles of fairness and due process”. The rules were adopted in the House without a debate or dissent, according to Hansard.

That’s it — finish and klaar.

Under the new rules, on 6 December 2019 DA Chief Whip Natasha Mazzone — in a party shake-up, Steenhuisen had by then become interim leader — submitted her substantive motion for an inquiry into the removal of the public protector from office.

At the nub of this substantive motion lie a series of court judgments critical how Mkhwebane has conducted herself as public protector dating back to 2017.

“… (V)various courts made findings against Advocate Mkhwebane, stating inter alia that she grossly over-reached her powers when she recommended that the Constitution be amended to alter the mandate of the South African Reserve Bank, and when she sought to unconstitutionally and irrationally dictate to Parliament — to whom she is accountable — how and when legislation should be amended; and failed to properly investigate a complaint in relation to the infamous Estina Dairy Farm,” said Mazzone’s substantive motion, going on:

“Recognises that the Constitutional Court also found in July 2019 that Advocate Mkhwebane acted in bad faith by not being honest regarding her investigation processes, upholding a personal cost order made against her by the North Gauteng High Court…”

It was this Mkhwebane sought to counter when on Tuesday she drew parallels on how judgments can be overturned on appeal, and just because a judge said something, it wasn’t necessarily the end, as rulings can be overturned.

This is an echo of what she wrote to Modise in July 2019, arguing an adverse finding in court wasn’t proof of incompetence:

“Simply put, a judicial overturning and setting aside a decision of the public protector is not admissible evidence of incompetence and cannot, without more, be relied upon as substantive evidence to prove her incompetence.

“This is made clear when we consider the comparable situation of judicial officers. For the judiciary, it is an accepted norm that judges are allowed to make errors which are susceptible of being corrected through the normal appellate or review mechanism.”

But in January 2020, Modise decided the DA motion was sufficient to move to the next stage of the process — the appointment of an independent panel of experts. In line with the new rules, political parties have been given to 7 February 2020 to submit their preferred names.

Modise will then announce the panel and name a chairperson. Over the following 30 days that panel will look into whether there are any grounds for Parliament to hold a Section 194 inquiry.

And while Mkhwebane on Tuesday argued she’d not had the chance to give her side — she also argued that Modise could not have come to her decision to proceed without her input — the public protector will get that opportunity. In terms of Rule 129X, this independent panel,

“must without delay provide the holder of a public office with copies of all information available to the panel relating to the assessment;

“must provide the holder of a public office with a reasonable opportunity to respond, in writing, to all relevant allegations against him or her…”

While oral hearings are not provided for at this stage, clearly Mkhwebane, as “the holder of a public office”, will get her say.

Coincidentally, when during the justice committee considerations in June 2018 when it came to Mkhwebane giving her side, she failed to show up, citing an undefined “family emergency”, forcing a postponement.

The new rules require that once the independent panel submits its report and recommendation to the Speaker, this must be put — urgently — to the House for a vote.

To all intents and purposes, the panel’s decision may well be that the DA motion is lacking, and should be dismissed. And then that’s it; it won’t go any further.

If the panel decides Mkhwebane has a case to answer and the National Assembly agrees — there could be debates and a vote — it’s the next step. A parliamentary multi-party committee will be established, which may hold public hearings, but must conduct itself in a procedurally fair manner to conclude within a reasonable time period.

Again Mkhwebane is assured of her right to be heard, to give her side — even if she said on Tuesday the process and rules had not allowed her to do so.

And yes, DA MPs will be part of this parliamentary multi-party committee process. But Mkhwebane’s sound and fury over the DA is misplaced. The subject of her litigation, DA MP Glynnis Breytenbach, is not on the rules committee and has been pedantic in recusing herself from any discussions involving Mkhwebane or her office, actually leaving the room.

Parliament is not above scrutiny. It has been challenged many times — over legislation, administrative decisions and over rules, or the lack of rules.

The United Democratic Movement (UDM), EFF and the DA between 2012 and 2017 went to court precisely over the lack of rules.

In 2012, then DA parliamentary leader Lindiwe Mazibuko successfully challenged the lack of parliamentary rules to give effect to Section 102 of the Constitution, the no-confidence motion. The rules were established and former president Jacob Zuma faced several such motions.

In 2017, the UDM successfully went to court over the possibility of a secret ballot for such motions of no confidence, which the Constitutional Court ruled was the Speaker’s decision.

And in December 2017, the EFF, with the UDM and Cope, successfully obtained a Constitutional Court judgment that Parliament had to finalise its Section 89 rules regarding the removal from office of a president.

Every time the judges may have told Parliament to fix its rules — but the judiciary studiously stayed away from telling the legislative sphere of state how to do it.

On Thursday, Parliament did not respond to a request for comment on this.

On Sunday in a statement Parliament said its “processes and the rules adhere to the rules of natural justice… and are informed by the relevant constitutional principles of fairness, transparency and accountability. Accordingly, there exists no legal impediment or grounds for the (National) Assembly not to proceed with the implementation of the new rules”.

The public protector’s office underscored Tuesday’s message — the rules and the process currently under way are “unfair” and “unconstitutional”.

“Her (Mkhwebane’s) grievances have to do with the fairness of the process. She is advised that the rules that have been adopted and the application and implementation therefore are unconstitutional and unlawful.

“To this end, she wrote to the Speaker two days ago seeking a resolution of these grievances. The Speaker has until close of business (on Thursday) to respond, failing which the public protector reserves all her rights.”

So it may yet come to a court case.

If it does, legal proceedings are another twist in a process that began in September 2017. DM

Joseph Chirume for GROUNDUP
Save 3 mins