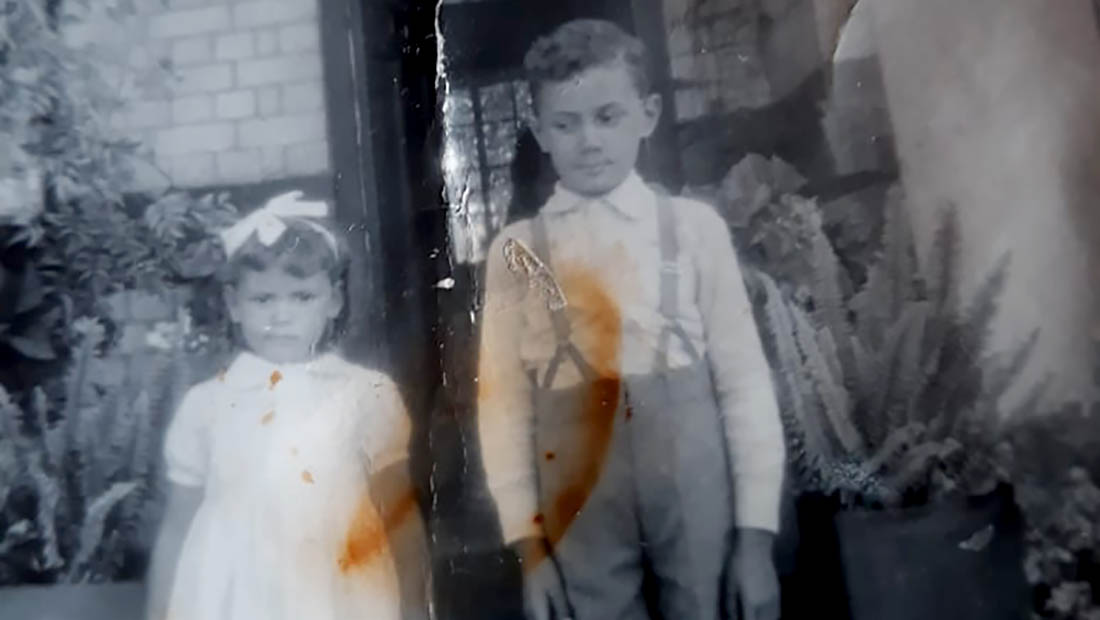 Dougie Oakes and his sister Ronnie, at their Aunt Murie’s house, No 1 Myburgh Road. (Photo: supplied)

Land expropriation without compensation has sparked intense debate throughout the country, in most instances splitting South Africans on racial lines. My family — and my wife’s family — were victims of expropriation too: property expropriation during the high noon of apartheid. Here is my story…

In the 1960s, in Myburgh Road, Diep River, in the southern suburbs of Cape Town, the Group Areas Act hung and hovered, swinging this way and that, teasing the area’s largely working-class community into a false sense of security.

Most of the houses in the road were in a state of disrepair – and so when Group officials came to tell residents they would have to move, the news was greeted with ambivalence by most people.

Some were worried about having to move; others thought that better housing was not an unattractive proposition.

I was at primary school then, and like other children my age, knew most people in the neighbourhood.

We lived opposite the Methodist Church’s cemetery in a rented house with an enclosed stoep that my mother, a formidable matriarch known to everyone as Dot, polished once a week with Cobra Red.

The neighbours in our block of semis were a widow named Mrs Murrigan, the Saffiers, the Fishes, the Groenemeyers, my Uncle Horrie and Aunty May, the Fortunes, the Irelands and the Petersens.

Financially, most families would have been regarded as poor, with the exceptions being the Fishes and my Uncle Horrie, whose ability to pick a winning racehorse was regarded with awe.

North of our house, on the corner of Greenwich and Myburgh Roads, lived my mother’s best friend, Mrs Plaatjes, and further on, towards my Aunty Murie’s house, (just before where the present Westcott Primary School is now located), were the stand-alone home of the Ebdens and the semis of the Jepthas, the Buckleys, the Carstens and others.

Ernie, my father, was a postman with a reputation for getting drunk at the end of every month. But I also found out – many years later – that he had thought deeply about the implications of the Group Areas Act. And although political discussion in our house was a no-no – even when visitors were present – my dad did not trust the apartheid government.

It was this suspicion of their motives that moved him to get on his bicycle and cycle to Heathfield (on the other side of the railway line), to look at housing developments there.

In what was probably the most courageous decision he would ever take, he signed up to become a homeowner in a small development in Seven Oaks Road.

It got us a house for R32 a month over 20 years (which became R13 a month after his government subsidy kicked in).

We moved to Heathfield, and a few other families in the road moved to other coloured suburbs such as Grassy Park.

Most families expected to be rehoused close to Diep River, but their hopes were dashed by the resettlement policies of the apartheid state…

They were instead dumped in a flat, soulless township of matchbox houses and flats in Manenberg. This move-and-dump process was repeated many times – in District Six, in Sea Point, in Mowbray, in Simon’s Town, and in a host of other places.

The human cost of this act of social engineering was horrendous.

I heard later how the children of former neighbours in Myburgh Road had struggled to cope in their new environment. We were told that at least one of my former playmates had become a drug addict, four had ended up in jail, of whom two had died in prison gang fights. There were also broken marriages and unplanned pregnancies.

Over the years, acquaintances have suggested to me:

“Perhaps, just perhaps, some of the people you grew up with were simply ‘fated’ to become what they became.”

And then they’ve asked: “If you grew up in largely similar circumstances, why did your life turn out differently?”

It was an observation that angered me then – and continues to irk me now.

I believe my life turned out differently because I had escaped the horrors of growing up in a Manenberg, a Lavender Hill, a Bonteheuwel or an Ocean View.

Environment, as far as I’m concerned, caused families all over the Cape Peninsula to lose several generations to a crazy ideology.

Group Areas fucked up families. There’s no other way to put it.

Yes, I was lucky – but the reality for my parents, and two sisters and one brother, was that we could not afford to live in Heathfield.

My chore, until halfway through high school, was to walk from Heathfield to Diep River every second day, to buy bread and other household items “on the book”, as they used to say, from a shopkeeper called Mr Levin.

For a long time, having to do this filled me with shame.

Fortunately, I was able to overcome this state of mind at the school I attended, South Peninsula High – for two reasons: my confidence was boosted by the fact that I was a record-breaking athlete, but mainly because of the political influence of a number of teachers at the school… Richard Rive, Daphne Wessels, Reggie Lesch, Fred Coker, MN Moerat, to name just a few.

Through them, I realised that what happened in Diep River – and, indeed, to coloured and African families throughout South Africa – was an attack on their humanity by a heartless regime, who were encouraged by those who voted for them.

I was a survivor – and, over time, I discovered within myself a desire to fight for my dignity and the dignity of others.

When I read some of the comments being made about land expropriation without compensation by many white people, I get extremely angry.

I know that the debate about land revolves mainly around rural farmland. But then I invariably ask myself: what about the tens of thousands of black people in urban areas, who were simply pushed out of their homes and dumped in so-called townships?

The majority of coloured people rented the houses in which they lived – for a simple reason: most could not afford to buy their own houses. But this should not make their treatment by the National Party government seem any less despicable.

Families who did own houses were treated equally badly: Group Areas inspectors connived with white friends and others who were prepared to pay bribes to force homeowners to sell their houses at far below market value. The warning by these inspectors was:

“Sell lower, or let the state decide the value of your house.”  This was not a choice.

In anyone’s book, it was bullying – and stealing.

Those who shout so loudly about ANC government corruption ought to remember this… and reflect. DM

Dougie Oakes is the editor of the best-selling history book, Reader’s Digest Illustrated History of SA: The Real Story. He has been in media for more than 40 years as a writer, features writer, opinion page writer, leader writer, sports editor, politics editor and speechwriter.