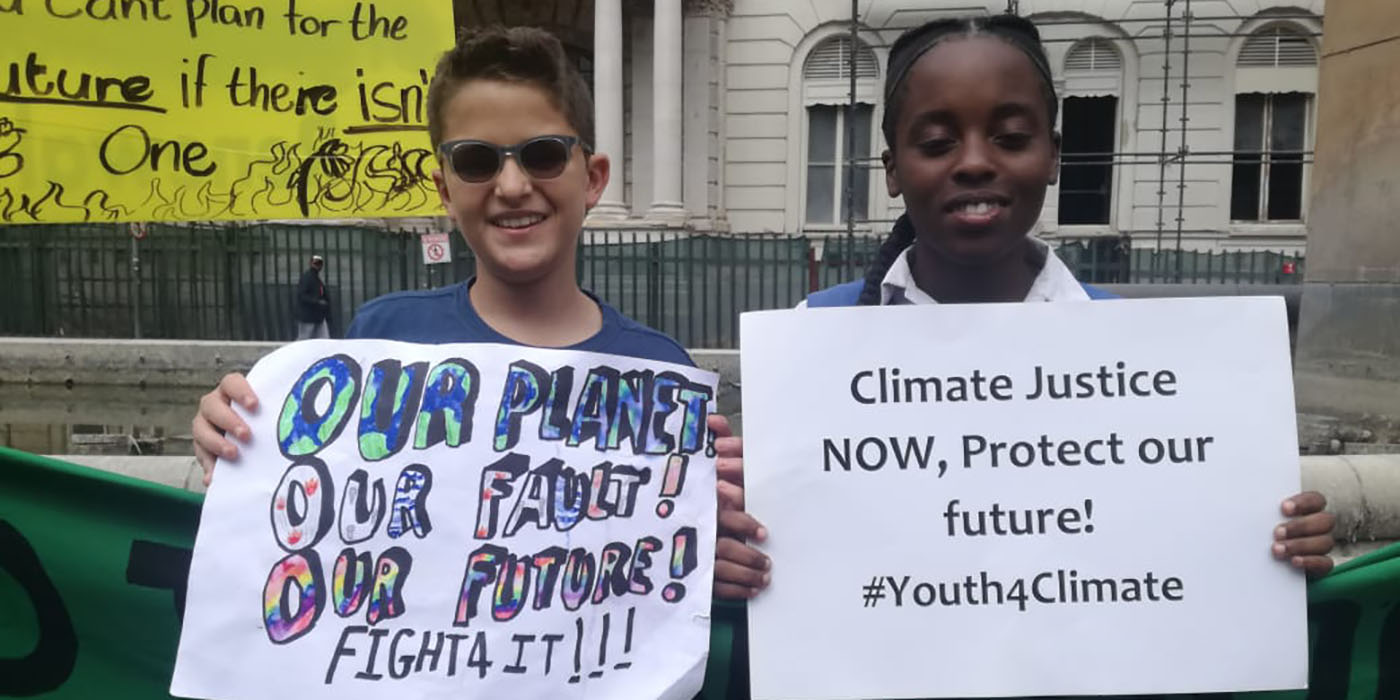 Jacob Gordon and Munnira Katongole are adamant to contribute towards alleviating climate change one small change at a time. (Photo: supplied)

As each day passes, the effects of the climate crisis take a day away from future generations. Representing those generations outside the Gauteng Legislature, standing with a handful of climate activists from Extinction Rebellion, were two young learners determined to fight for their future.

Jacob Gordon is 14 years old in Grade 9 at King David Victory Park and he wants to be a conservationist one day. He didn’t ask for permission at school to join the picket, but felt the need to be part of it mainly because of his concern for animals. He said after a shouting and screaming match with his parents, they gave in.

“It’s not their future as much as it is ours”

He is passionate about animal species and nature and feels climate change is destroying that. He says that in the next 50 years it is estimated that more than a million species of animals could be extinct.

He said that when he has kids one day, he wants to be able to tell them that he was a part of this revolution. Jacob is talking to the municipal government in his area in Highlands North in a quest to persuade them to install bicycle lanes “because I’ve been nagging my mom to (let me) ride a bicycle around where I need to go so I don’t have to drive”.

Jacob has also cut down on his dairy and meat intake.

“I started cutting dairy last night because cows and sheep, cows especially, are the biggest producers of methane which is a huge greenhouse gas. I still eat eggs but I’m looking to go vegan soon.”

Munnira Katongole is 16 years old in Grade 11 at Parktown Girls High School. She’s been engaging with the climate crisis on a research and policy level.

She wanted to develop her own personal understanding of the climate crisis and educate people on the intersections between poverty and climate change.

“Last year (2019) I embarked on a research project for myself just to kind of understand climate change and within that process, I’ve also been trying to educate the people around me. It started with me, some peers at school and now I’ve also been engaging with some youth-led movements for climate change”

Munnira is also part of the South African Institute of International Affairs’ Youth Policy Committee on climate which has drafted declarations from a youth perspective and recommendations which have been presented to figures such as the Minister of Environment, Forestry and Fisheries Barbara Creecy.

“Recently we had a statement from that committee that was presented at the COP 25 conference. I’ve also been doing recycling initiatives within my complex and I’m looking to start a vegetable garden to go eco-friendly and feed people. So, I’m really trying to analyse the intersections between social injustice and climate change.”

With geography, she says, teachers tend to sugar-coat the effects of climate change.

“I think if you educate people, especially young people, whose future is going to be affected by these sorts of things, make sure to highlight the vast effects and I think that will inspire interest and more activism from young people”. DM