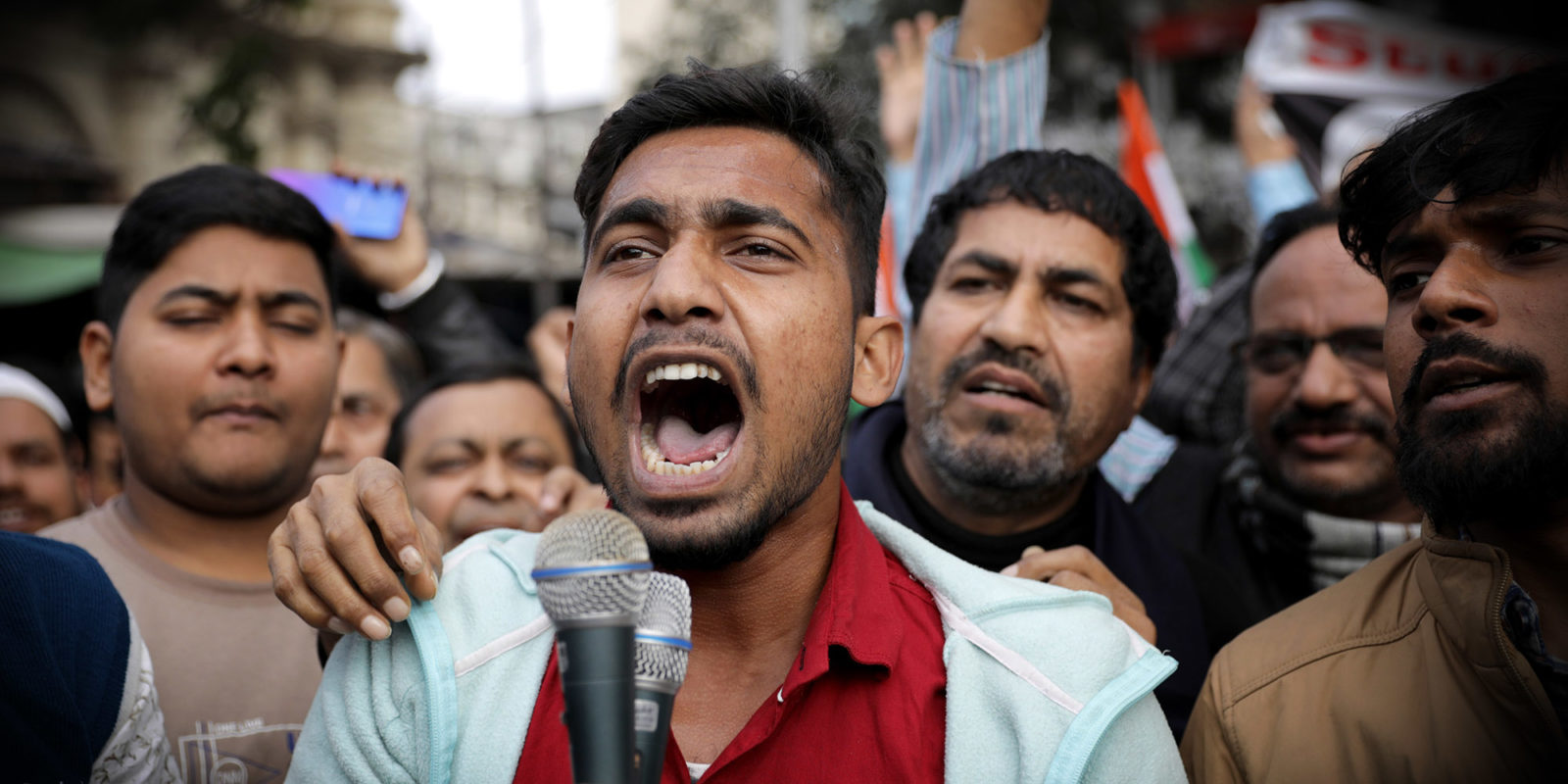 In the last weeks of 2019, India erupted in mass protests against attempts by Prime Minister Narendra Modi to exclude millions, Muslims in particular, from Indian citizenship. Activists say the magnitude and spread of the protests is unprecedented. It’s estimated that on one day, 8 January, more than 250 million people participated.

“Modi is unassailable!” “Young people aren’t interested in politics!” “The age of street protests is over.” These were the myths being cultivated in India until recently.

However, the protests in the wake of passing the Citizens Amendment Act (CAA) and the planned National Register of Citizens (NRC) have dispelled that. They are unique for a number of things. These include the absence of a centralised leadership; the enormous crowds at many of the demonstrations; the number of protests and the frequency with which they are occurring; the brutality of the crackdown by the police in some places, and the innovative and creative ways in which dissent is being expressed.

These protests are mainly led by youth and students, notably young women, the first time since independence that this has happened on this scale. While the Nav Nirman movement and JP movements of the 1970s were also youth-led, they were confined mostly to the Gujarat, Bihar and Hindi heartland and did not spread to the NorthEast and South India, as today’s protests have.

Despite boasting about plans for Digital India and how the country has the world’s second-largest number of internet users, this is the first time that the state has used internet shutdowns as a tool so widely to quell dissent and suppress protests. This is in addition to the five-month long internet shutdown in Kashmir, something that has never has happened anywhere in the world before.

These protests have also busted many myths. Here are some of them:

“There Is Modi Only” or TIMO, as one author puts it, was the resounding message of 2019 elections. It took only six months for that notion to get frayed. The combination of Prime Minister Narendra Modi and Home Minister Amit Shah – once hailed as “forward thinking” politicians who “have their finger on the voters’ pulse” more sensitively than anyone else – has been exposed for their sinister designs and divisive agenda. Modi’s fallacious claim that his government had never discussed a National Register of Citizens is a sign that the protests have started weakening the bubble he meticulously created around himself.

Protests are generally perceived to need a central leadership, with a single message and directions given from a “control room”.

The current protests have proved this wrong. Nobody knows the number of protests happening all around the country. They are happening in big cities, small towns, villages, and even residential colonies in some cities. They are happening during wedding receptions, graduation ceremonies, Christmas carol services and other occasions.

When ordinary people think about political protests, they imagine long speeches, rhetorical sloganeering and protests in designated places. These protests have broken the template. From using humour and sarcasm, artistic expression to political sloganeering, from short videos to parodies of popular movie clips, the demonstrations have seen a unique mix of innovative strategies and creative political messaging.

It’s a cliche that the Indian middle class is apathetic to politics and concerned only about their material well-being. They are believed to be Modi devotees. These protests have proved that it’s not the same any more. Middle-class Indians are finally running out of patience, not just with the Citizens Amendment Act and the planned National Register of Citizens but with the country’s crashing economic indicators. They are visible in large numbers at nearly all the protests.

Despite many examples to the contrary (including the independence struggle, the JP movement and the Naxalbari movement), many insist that India’s youth are focused only on their careers and are indifferent to politics. This isn’t true. Not only are young people participating in the protests, they are leading them.

6. No one can beat the Hindutva social media strategy

While the Bharatiya Janata Party’s thousands of paid social media workers are unmatched for their numbers and money power, these protests have shown how the same social media, when used carefully, could be a potent weapon to mobilise and co-ordinate protests, despite the state trying to partly shut down the internet in some cities and completely in some other.

Party manifestos, at best, have been an intellectual exercise for most of the political parties, not taken seriously. Except for isolated attempts, there have been no political or civil society initiatives to hold parties to account for what is written or missing in manifestos before or after the elections. Not any more. With Amit Shah justifying the abrogation of Article 370 of the Constitution which gave Kashmir special status and moving the Citizenship Amendment Act by noting that this had been promised in the BJP manifesto, it would serve voters well to scrutinise manifestos closely hereafter.

8. Indian society is so polarised, they won’t stand up for each other

The concerted effort by the Rashtriya Swayamsevak Sangh and its political wing, the BJP, over the years have been successful in creating significant rifts between India’s communities, especially Hindus and Muslims. While it is too early to say communal harmony is restored, there are signs that many Indians have seen through the divisive tactics of these Hindutva groups. Among the signs that the climate is changing: stories of Hindu friends standing guard for Muslims while they are offering namaz during protests and in the curfew-hit Uttar Pradesh; Hindus forming a safety ring around a Muslim wedding procession, or a church choir reacting to Modi’s barb about being able to identify protesters “by the clothes they wear”, by wearing Muslim attire.

9. The age of street protests is over. Now it’s about managing public opinion through better public relations

After the 2014 elections, mainstream politics seemed to have become a public relations exercise, with event management and marketing companies being engaged by parties to run their campaigns. They framed slogans like “Chai pe charcha”, “Abki baar Modi Sarkar” and “Lage raho Kerjiwal” (Editor’s note: these slogans are hard to translate. Roughly they mean “discussions around tea”; “this time Modi government”; and “go on Kerjiwal (the Chief Minister of Dheli)”. These were choreographed for different audiences and mediums of communication, making politics more of a spectacle. Street protests became a dirty word. That explains why parties and party leaders express their dissent on Twitter, but are rarely seen on streets.

The protests against the Citizenship Amendment Act and National Register of Citizens have reclaimed that lost space and are growing, as reflected in an article in The Wire this week. No longer are protests confined to enclosed areas designated by the police, which have to be wound up by 6.30pm. Whether prohibitions against the public gatherings are in force or not, protesters are reestablishing their voices across India. MC

Joe Athialy is a social activist based in New Delhi and a correspondent for Maverick Citizen.

This article was first published by Scroll.in.