Record pass rate for matrics of 2019 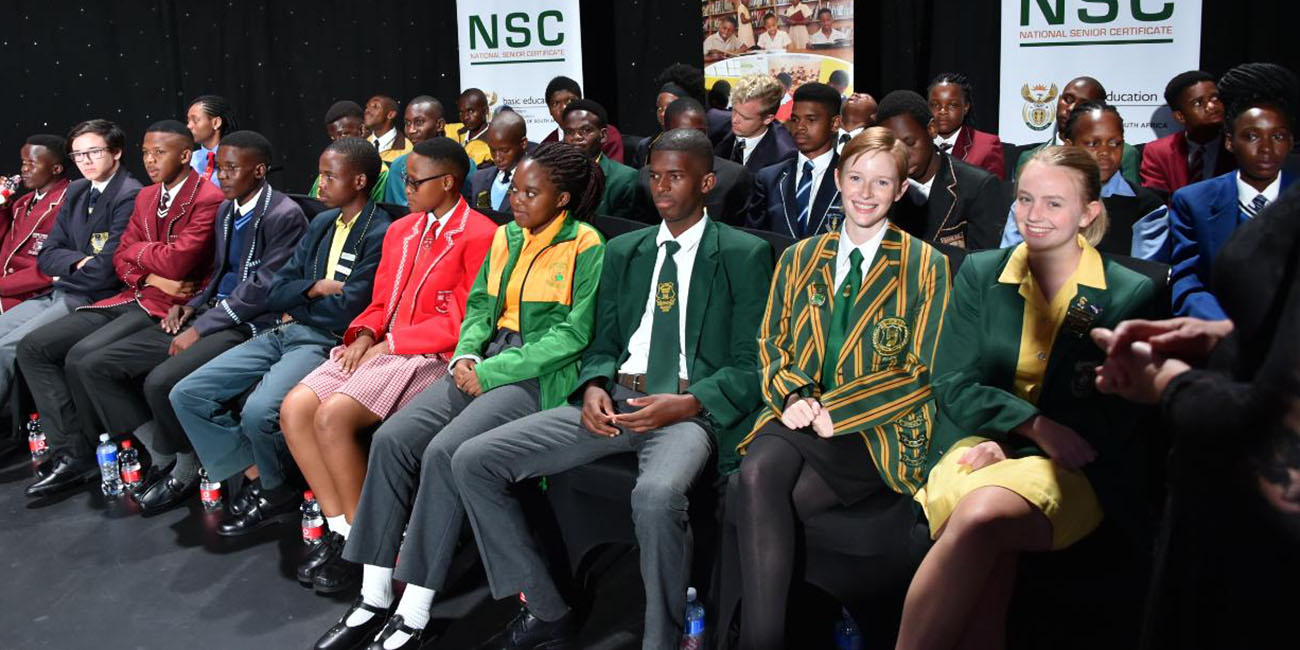 Eastern Cape, North West and KwaZulu-Natal recorded the highest improvements as the national matric pass rate rose to a record 81.3% in 2019. The jump suggests inequalities in education may be reducing, but there are still challenges with the quality of schooling and the many, many students who don’t make it to Grade 12.

The matric pass rate continued its steady rise in 2019 as a record 81.3% of students passed, bolstered by significant improvements in “no-fee” schools and those from the Eastern Cape, North West and KwaZulu-Natal, but the results also point to systemic challenges in the education system.

Basic Education Minister Angie Motshekga announced the 2019 matric results on Tuesday evening in Midrand. President Cyril Ramaphosa said they showed the government’s investment in education was yielding results and the gap between rich and poor schools was narrowing. 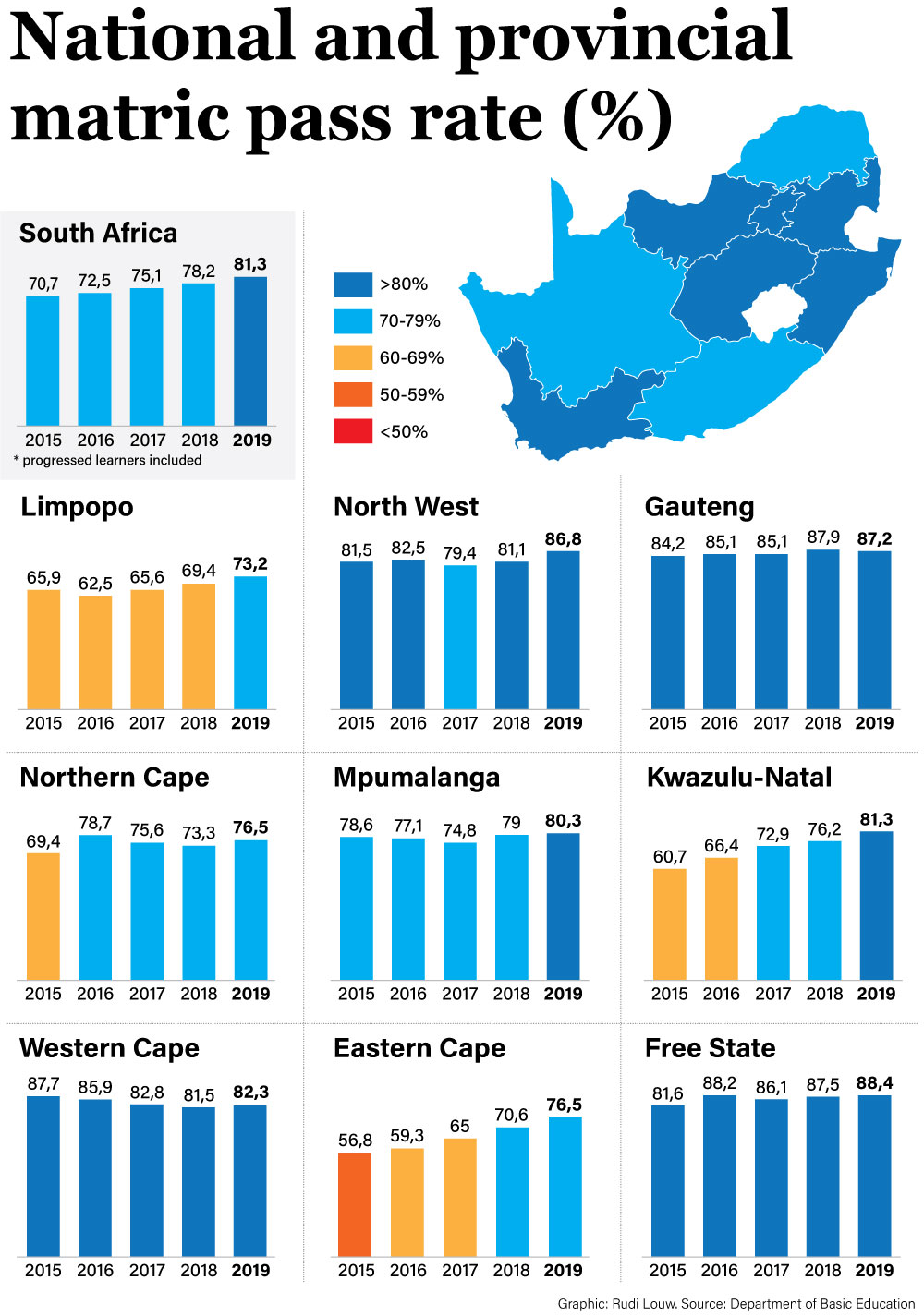 The overall pass rate has steadily risen from 70.7% in 2015. The real standouts in 2019 were the increases in pass rates in previously poor-performing areas of the country. 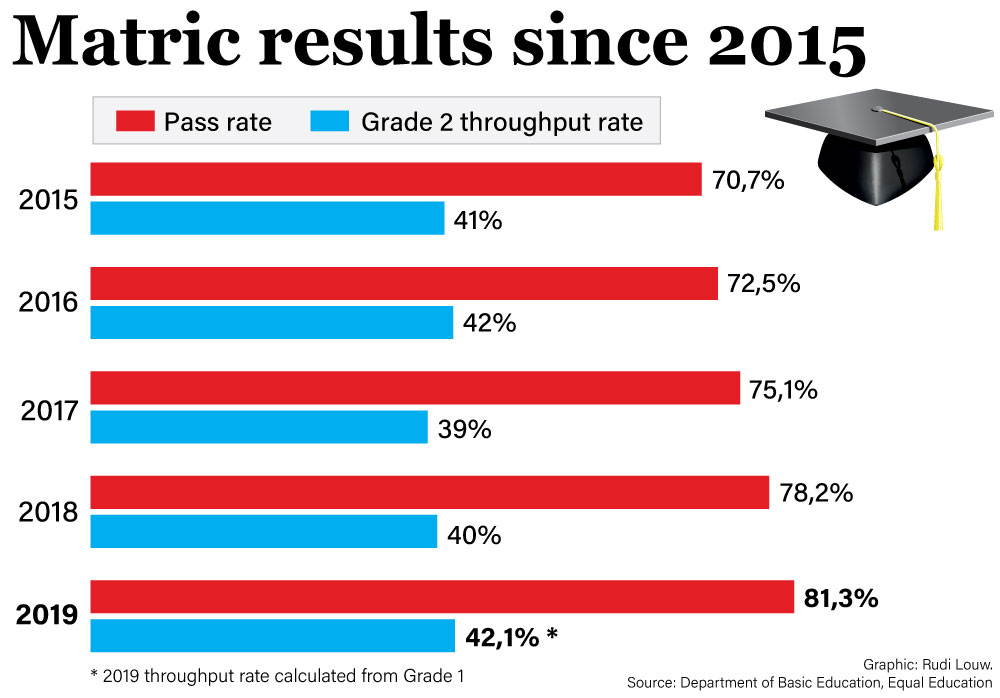 Eastern Cape saw an improvement of 5.9 percentage points, North West 5.6% and KwaZulu-Natal 5.1%. For the first time, none of the 72 districts across the country recorded a pass rate lower than 60%. Students in quintiles one to three, from areas with the lowest surrounding wealth, significantly improved their results, with a bachelor pass rate increase of 14.4 percentage points compared to 2018.

“It is significant that we’ve had some provinces improving a great deal,” said University of Johannesburg research fellow Mary Metcalfe.

“It’s also significant we’re beginning to get a reduction in some inequalities between quintile one, two and three schools, and four and five,” she added.

The University of KwaZulu-Natal’s Dr Mlamuli Hlatshwayo said it was “a miracle” that no district recorded a pass rate under 60% and that Free State, North West, Eastern Cape and KwaZulu-Natal made improvements despite significant structural challenges in their education systems, with many students having to travel long distances to school and schools lacking adequate infrastructure.

Eighty-one schools in KZN were destroyed by floods in 2019, said Motshekga, promising to address the challenge soon.

National and provincial pass rates are sometimes criticised as simplistic and experts often evaluate the quality of the results on whether students passed with bachelor, diploma or higher certificates, as well as performance results in various subjects.

A higher certificate pass requires minimum marks of 40% in a student’s home language, 40% in two other subjects and 30% in three other subjects while diploma and bachelor passes require higher marks.

Nationally, bachelor passes improved by eight percentage points in 2019 compared to 2018 with 36.9% of candidates qualifying to apply for bachelor studies. KwaZulu-Natal, Eastern Cape and Northern Cape saw the highest increases in bachelor passes, but they still fall behind top provinces Gauteng, Western Cape and Free State. The national diploma pass rate rose by around one percentage point from 2018 to 28.7%.

Statistics on dropout rates and performances in some so-called gateway subjects paint a more worrying picture.

“Of 100 learners that started school, 52 made it to matric in 2019, 42 passed and 19 qualified to go to university. If you take into account the fact that some learners who don’t pass now will still go on to matric then this rises to 55%,” said Dr Nic Spaull, a senior researcher in the Research on Socioeconomic Policy (RESEP) group in the economics department at Stellenbosch University.

“The slow poison of drop-out rates between grades 10 and 12 is eating away at the future of the youth of this country,” said Marchesi.

Ramaphosa said the government aimed “to address weaknesses in the system that result in high numbers of learners who enter the education system in Grade 1 not completing their schooling”.

Some of the results from particular subjects also show worrying patterns. In the past five years, there has been little to no improvement in increasing the proportion of students who achieved over 40% in subjects such as agricultural sciences, business studies, economics, geography, life sciences and mathematics.

Over the same five years, there were improvements in the proportion of students who scored 40% and above in accounting, geography, history, mathematical literacy and physical sciences.

Motshekga emphasised that the department of basic education would focus on a greater number of metrics in the future, including more detail on subject results and dropout rates, to measure education in the future.

“There’s a complexity that we tend to miss if we over-concentrate, said Hlatshwayo, mentioning the need to look at dropout rates, challenges students face moving from high school to tertiary education, and the lack of infrastructure in schools.

Spaull said: “The reason this is so significant is that every year the minister promises to include a broader basket of indicators so that the country stops obsessing about this one indicator, the overall pass rate. We need to be looking at things like the throughput pass rate, the quality of passes, the number of learners taking maths and sciences.” DM