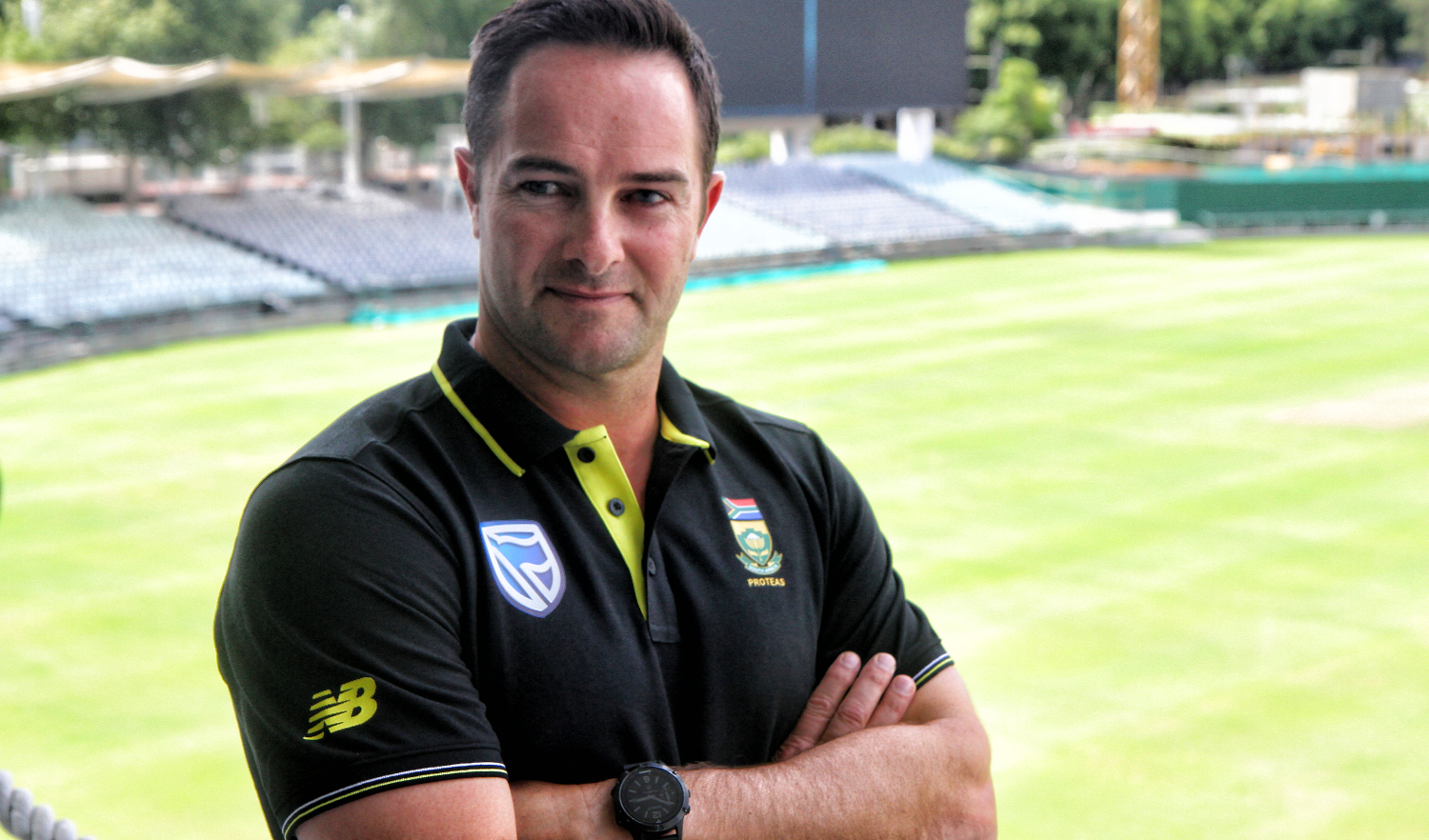 Mark Boucher during the CSA Press Conference at the Newlands,Cape Town on 14 December 2019 ©BackpagePix

Cricket South Africa was finally able to present a modicum of good news on Saturday, when Mark Boucher was unveiled as the Proteas coach, not only for the upcoming four-Test series against England, but until after the 2023 Cricket World Cup.

The 43-year-old Boucher, who played 147 Tests for the Proteas and is considered South Africa’s greatest ever wicketkeeper-batsman, has been a successful domestic coach over the past four seasons. His no-nonsense leadership style, vast experience and deep technical insight are essential to rebuilding a Proteas team in decline.

Acting director of cricket Graeme Smith also announced that the youthful Enoch Nkwe, who had the thankless task as interim coach during October 2019’s humbling tour to India, will assist Boucher. It’s a potentially divisive decision from a racial transformation perspective as the 36-year-old Nkwe has also had success at franchise level and holds a level four coaching certificate. Smith though, was ready for the tough questions.

“I felt the Proteas needed a really hardened, internationally experienced guy,” said Smith. “Mark is tactically very knowledgeable. We all know what qualities he has as a man as well. I felt those decisions were the best for the current Proteas set-up.

“We’ve had a number of chats with Enoch in terms of his path going forward, and developing him into a high-standard international coach. We feel he has a lot of qualities that are going to be very useful to Mark, and in progressing his own future in South African cricket.

“My job is to create cricket excellence. I 100% feel I’ve made the right decision for the Proteas in terms of cricket excellence. I feel Enoch’s appointment as assistant coach is the right thing, also for Enoch’s future. We also need to think about managing people and not just a number. I’m very aware of transformation. I led my country for 11 years. I had to be very much part of managing those processes. Mark’s appointment, as a battle-hardened international cricketer, is what was needed.”

Against this backdrop, the organisation is still reeling after two weeks of scandal and turmoil that revealed a deep leadership rot from president Chris Nenzani and CEO Thabang Moroe, to a complicit board.

Hundreds of pages of court documents, emails and reports in Daily Maverick’s possession, as well as interviews with seven key figures paint a picture of the leadership of an organisation that had turned itself into a fiefdom for a select few.

Moroe was suspended last week, there will be a forensic audit into CSA’s financial affairs, Standard Bank has pulled its R80-million-a-year sponsorship and Momentum has threatened to cancel its sponsorship if the board doesn’t resign en masse.

Structurally, managerially and operationally, much blood still has to flow to clean up the dysfunctional organisation, which could be a case study illustrating the collapse of corporate governance. But in terms of rectifying the playing side of the game, there has been some positive movement.

Smith is acting director of cricket for the next three months. With Jacques Faul as the acting CSA chief executive for an indefinite term, there appears to be some stability after 18 months of background turmoil at the organisation.

Linda Zondi, who was the previous convenor of selectors until after the Cricket World Cup 2019, will form a selection panel with Boucher, captain Faf du Plessis and Nkwe. The CSA board has been completely by-passed in the new structure.

“There is no relationship [with the board] at this stage,” Smith said. “My point of call had been Jacques (Faul). We’re trying to sort the game and take it forward.

“I didn’t have a lot of confidence in the (previous) leadership of CSA. I made the communication very clear that I didn’t feel you could achieve in this role with the leadership that was there at the time. You need a robust CSA for people to be able to challenge each other. You need trust and you need to have an environment that’s ready for that. I didn’t feel the environment was ready before I took this job. If I’m going to come in I want to be able to do the best [I can]. I feel that the opportunity is there now. I have a lot of confidence in Jacques as the CEO.”

Faul has already met with Momentum to allay their concerns and he has acted quickly to repair CSA’s reputational damage with the public and its many stakeholders.

The millstone around his neck remains the existence of the current board, which has been whittled down to eight from 12. Four board members have resigned. But they all still have a lot to answer for, given most of the massive loss of income, the banning of media, a complete breakdown with the South African Cricketers’ Association (Saca), which has resulted in court action and the loss of their flagship sponsor. It all happened on their watch.

The remaining members of the board have been called to a special meeting in Paarl on Monday, 16 December where the CSA Members’ Council will also gather. The Members’ Council is the body that has the power to dissolve the board, although they failed to take that path when they met on 6 December.

After the board was summoned to a meeting with Sports Minister Nathi Mthethwa on 5 December, Daily Maverick understands there is more pressure than ever for drastic action. While it’s unlikely the Members Council will call for a full board dissolution, considering five council members are also on the board, there could be a vote of no confidence in board chairman Nenzani on Monday.

The circumstances are hardly ideal for Boucher and Smith to prepare the team to face England, but at least there is clarity at playing level. Boucher knows he has the freedom to operate without interference from an agenda-driven leadership.

“The game has been hurt. The bottom line is that myself and Enoch have been put in place to get the Protea team doing well. If we look after that space, I do think we’ll get the crowds and fans behind us again.” DM