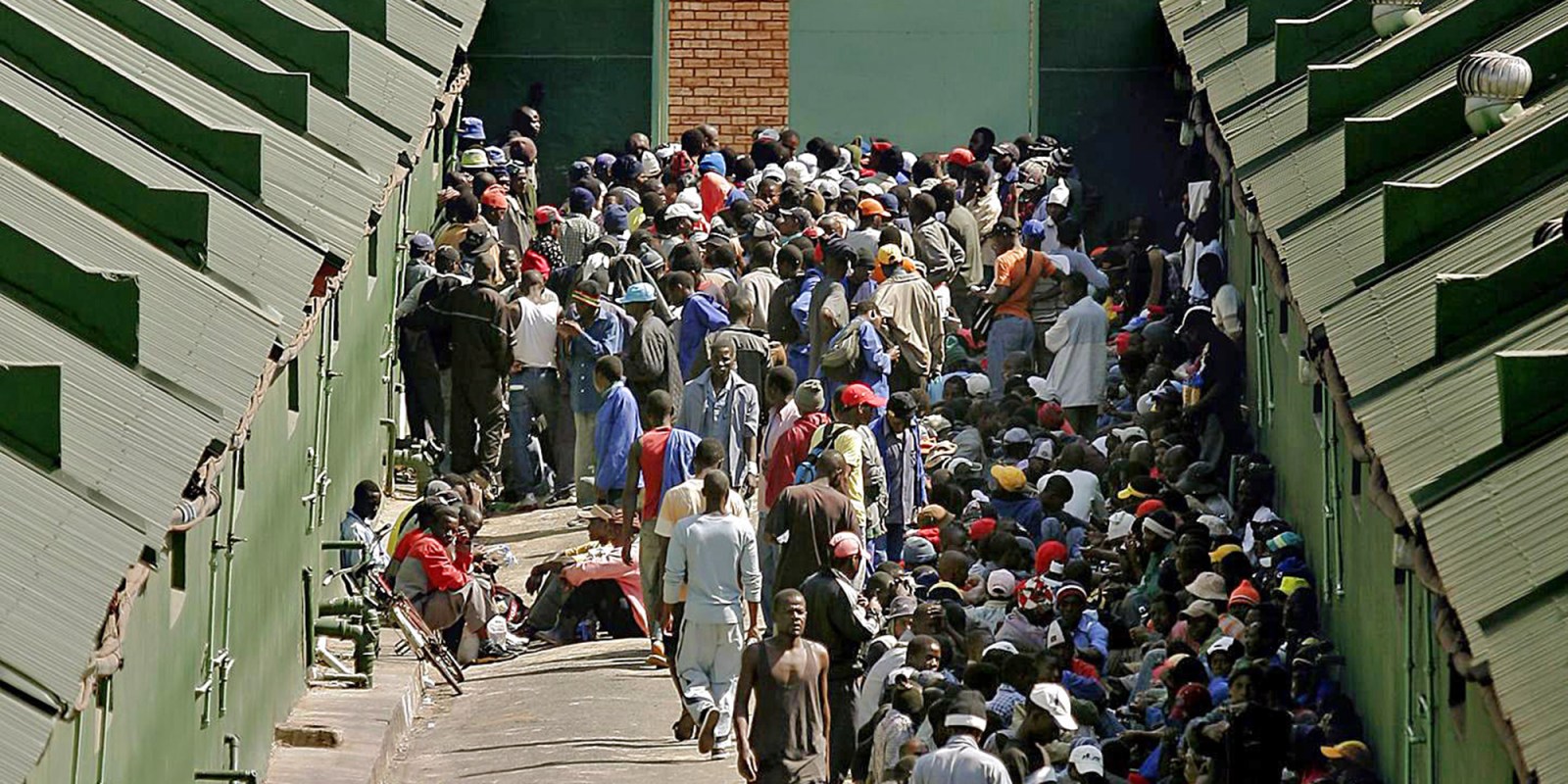 24 September 2005. Krugersdorp, Gauteng, South Africa. Hundreds of immigrant men on the other side of the Repatriation Tunnel at the Lindela Repatriation Centre in Krugersdorp. (Photo: Lisa Skinner/Media24/Gallo Images)

This week, on International Human Rights Day, Maverick Citizen published an opinion piece by Lawyers for Human Rights’ Sharon Ekambaram. The Department of Home Affairs has sent us a response.

Sharon Ekambaram wrote: “Over the past four days, we have watched Lindela Detention Centre being sold off to the highest bidder. And in this chaos and crisis, the Department of Home Affairs has been silent. This is consistent with the crisis in the asylum system and the related crisis of detention of the most vulnerable in our country.”

Perhaps Sharon Ekambaram should revisit her assessment of South Africa’s fulfilment of the duty to offer asylum.

She claims the Department of Home Affairs is silent on the auction of Lindela Repatriation Centre, which, by the way, she calls a “detention centre”. Lindela is a holding centre for persons to be deported, lawfully.

The Minister of Home Affairs, Dr Aaron Motsoaledi, commented on Lindela’s auction, including on broadcast media.

It boggles the mind how Ekambaram comes round to a deceptive assertion saying Lindela’s sale is consistent with some “crisis of detention”. South Africa has no detention camps for asylum seekers. It may as well be that the problem resides in her sheer misappropriation of concepts, which are even hardly defined. Take for instance, “popular violence against some”. Meaning?

The assumption that all foreign nationals who cross borders illegally deserve documents, with no procedures followed, is equally problematic, if not misleading. I for one pity the poet whose words she tortures impetuously to defeat every literary convention of analysis under the sun.

The poet never said receiving countries shouldn’t have procedures for those leaving their homes. In an interview about Home, cited on Facing History and Ourselves, the poet Warsan Shire says the encounter which opened her eyes to the harsh reality of living as an undocumented person in Europe was that of “a young Somali [who] had jumped to his death off the roof”.

A little attempt at contextualisation, for another continent and another country, might have helped.

It would defeat rules of logic to respond to the article’s numberless sweeping statements about detentions, torture and alleged detention of minors with adults. It’s easy to say anti-foreigner sentiment is institutionalised when you have neither intention nor obligation plausibly to provide proof.

Let’s be clear. On the matter of Lindela, Home Affairs cannot and will not sell anything it doesn’t own. Obfuscation, like a flat-tyre, won’t get anybody anywhere. A wholly-owned subsidiary of African Global Operations traded as “Lindela”.

Lifting chunks of information from the report of the UN Committee against Torture is not convincing. I do believe it would have helped to contextualise references to detention and torture in the spirit and context of the Committee’s observations.

We aren’t told in its June 2019 report the UN Committee did “welcome the dialogue conducted with the State party’s delegation”. It didn’t note, as alleged, a “lack of adequate safeguards against refoulement” or “forcible return of asylum seekers to their countries”.

What the UN Committee recommended is that Home Affairs be provided with “adequate human and financial resources to conduct the process of refugee status determination,” among other things.

Regurgitating the Committee’s observations, the article acknowledges “the country’s large caseload of refugees and asylum seekers”. Nevertheless, it still misses the point by locating solutions to forced migration within friendly, humane receiving states like South Africa.

It’s disingenuous to overlook push factors and situations in countries of origin, which constitute the leitmotif of Warsan Shire’s poem – Home.

As International Relations and Co-operation Minister Naledi Pandor said during her address at the General Debate of the 74th Session of the United Nations General Assembly:

“South Africa stands ready to work with all Member States to promote the United Nations and its objectives of promoting international peace and security, development and human rights so that all our people can live together in the larger freedom the founders [of the United Nations] sought.” MC