Heartbreak and panic as double load shedding cuts off A... 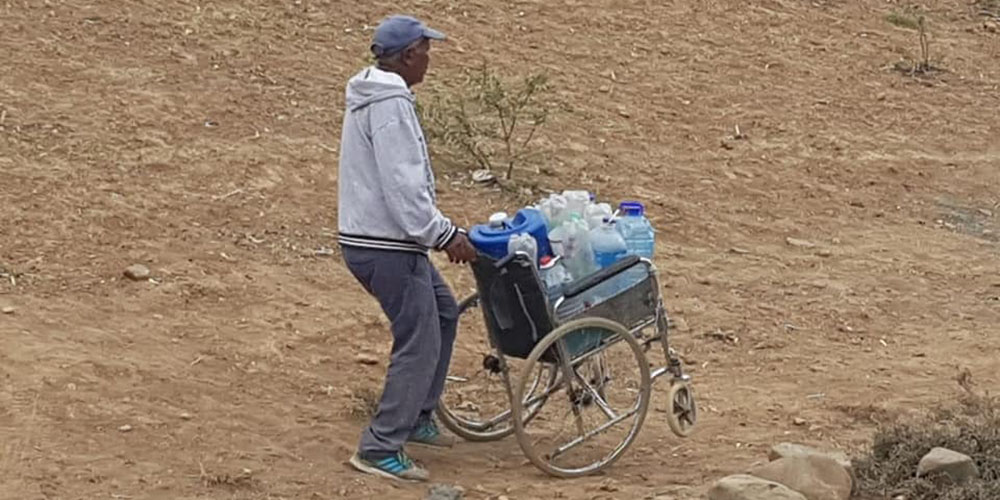 A man pushes water home in a wheelchair. (Photo: Gift of the Givers)

A double dose of load shedding has left the towns of Bedford and Adelaide with barely an hour of water on alternate days as the crisis in the drought-stricken area intensifies. Residents fear that if load shedding progresses to Stage 6 it will stop water supply altogether as hundreds of migrant workers arrive in town for the festive season.

Community leaders are heartbroken and tired as months of struggles to get water to people in Bedford and Adelaide in the Eastern Cape are growing — and nothing is helping.

“This morning we had an hour of water,” Adelaide shopkeeper and community leader Mohammed Gangat said. “It has been going on like this for two weeks now. The little stream of water that we are getting is so weak that you can’t even fill a tank in the hour that it is available,” he said.

To make things worse, the municipality has been advising people who want to donate water to work through officials. “We are not doing that. They won’t stop me,” he said.

Gangat said a borehole that had been sunk by Gift of the Givers with a pump powered by a diesel generator is now the town’s only source of water.

“My heart is completely broken for the people of Adelaide,” he said. “There are people who walk 5km to get 5l of water. When I open the borehole everybody comes out of their homes to run for the water. We are pumping 45,000l of water a day from that borehole. There is nothing else. We are very thankful for the borehole.”

He said while the temperatures in town had been a little cooler, it was now warming up again.

“We have no water and no electricity,” he said.

Since Adelaide’s main supply dam dried up, water from the Fish River is being split between Bedford and Adelaide.

On Sunday, Gangat filled tanks to drive them to the nearby town of Bedford, also struck by severe water problems. “It made me sad to see how people came running after that truck,” he said.

Bedford community leader and councillor Cecilia Auld said because the water pipeline runs across the border of two municipalities, the pump stations are under load shedding up to six times a day. “I don’t know what we are going to do when Stage 6 hits us,” she said.

She said to make things worse, technicians have to drive from pump station to pump station to manually switch them on again. “There are places in town that have had no water since Sunday,” she said.

She said Gangat managed to distribute 6,000l of water in the informal settlement on Sunday.

“Nobody is helping us. We can’t even access the constitutionally guaranteed 25l per day,” she said. “I am so tired. You can only watch a four-year-old struggling to carry a 5l bottle of water and a gogo pushing a wheelbarrow with a big water bottle on it so many times. It is beyond heartbreaking what is happening here,” Auld said.

She said many migrant workers were returning to Bedford for the festive season and there were grave concerns over the sanitation situation.

“People are using the bush. What else must they do? There is no water for the toilets. If it rains now, all of this is going to wash into the river,” said Auld.

Auld said load shedding was happening so frequently that the town’s reservoir couldn’t reach 35% capacity to allow for water to be distributed.

“I honestly don’t know where to turn any more.  Last week temperatures hit 40°C — and people had no water to drink. Water levels are so low that it takes two pumps to pump enough water, but we only have one. A tender was put out for another, but only one supplier applied. Now they have to re-advertise,” said Auld.

“People came here and made a borehole, but now it is capped and nothing is happening. We can’t access the water,” she said.

Dr Imtiaz Sooliman from Gift of the Givers confirmed their borehole was the only source of water for Adelaide.

Part of the water pipeline falls under the Raymond Mhlaba municipality and part under the Blue Crane Municipality.

“Our system barely has time to recover due to this,” she said.

A spokesperson for the Eastern Cape Department of Co-operative Governance, Mamnkeli Ngam, said people had to be patient.

“We have processes to follow. It is going to take some time,” he said. MC