Fewer baby deaths at Leratong Hospital: This is how they did it 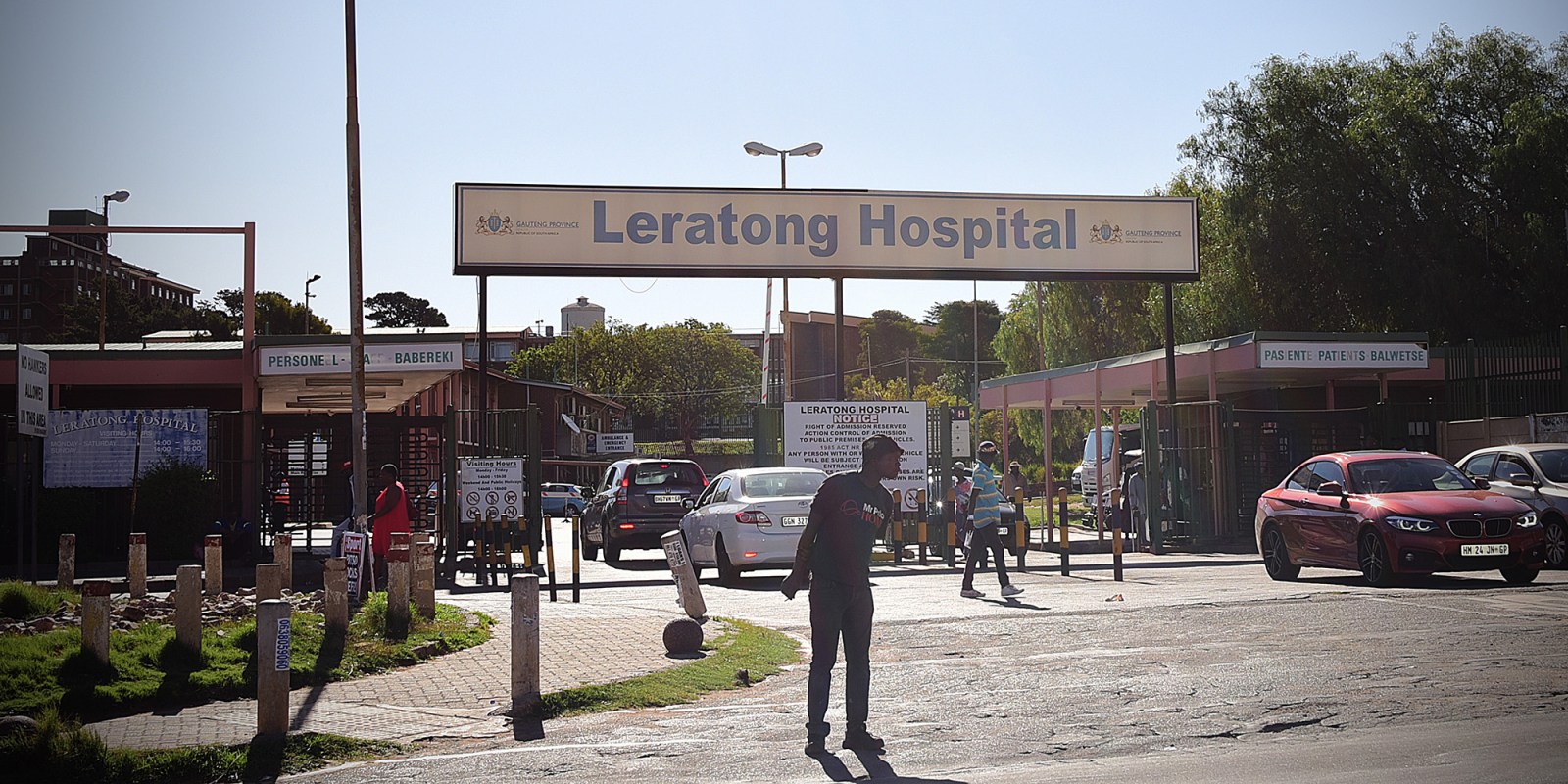 Amid concerns over rising neonatal deaths in some health facilities in Gauteng, at least one hospital has a good story to tell.

The Leratong Hospital in Krugersdorp in Johannesburg has managed to reduce its neonatal deaths by 42% in 12 months using the so-called daily lean management system.

This achievement comes as Gauteng MEC for Health Dr Bandile Masuku visited various healthcare facilities the past month. He inspected the Rahima Moosa Mother and Child Hospital that also has one of the lowest maternal and perinatal death rates in the province.

Some hospitals in Gauteng, however, have not been as successful.

Masuku released figures in an answer to parliamentary questions on the issue of neonatal deaths. In 2018, six babies died from klebsiella at the Thelle Mogoerane Hospital in Vosloorus. Among issues uncovered in an investigation into the deaths were that there were no appropriate isolation facilities for infectious neonates, staff shortages, and the lack of IPC (infection and prevention control) oversight.

The George Mukhari Hospital has also been battling with rising neonatal deaths the past five years. According to Masuku’s figures in a written reply to a parliamentary question the number of neonatal deaths increased from 232 in 2013 to 302 in 2018. DA MPL Jack Bloom said he was “alarmed by the sharp increase in the percentage of deaths of babies in the neonatal ICU which has nearly doubled from 10% in 2013 to 19% in 2018”. Masuku said complications related to premature births were the main reason for the increase in the number of deaths.

The department of health said in a media statement at the time that there were preventive measures put in place such as ongoing training for staff on hand-washing techniques as part of initiatives to strengthen infection prevention and control.

Meanwhile, Leratong Hospital is said to have reduced neonatal deaths at the end of 2018 by 42%. Hospital CEO Grey Dube said the neonatal mortality has been drastically reduced.

In September 2019, only two patients in the Leratong Hospital neonatal ward had infections. Infections have been the main cause of neonatal deaths at this hospital.

Other successes seen by the staff of the neonatal ward are reduced absenteeism and late-coming. The staff found that late-coming caused medical errors and they wanted to change that.

“We now record the exact time of arrival and every week we count the minutes. If you reach three hours, you pay back the lost hours,” Henrietta Ramasolo, the operational manager for the ward, explained.

Dube said the successes attest to the lean management system which the hospital had implemented from April 2017. They began seeing a gradual reduction in neonatal deaths after the programme had been implemented and late 2018, the changes were visible.

According to Dube, Dr John Toussaint, a former American healthcare CEO who founded a non-profit education institute Catalysis, provided Dube and several other Gauteng hospital CEOs and staff with training and education on the lean management system. The programme focuses on leadership and teaches workers how to think and come up with solutions to problems.

Dube said he had to model certain behavioural characteristics such as self-discipline in front of his staff so that they could learn from him. One of the things he learned was to ask the right questions when speaking to nurses.

“Before the training, whenever I had visited the wards I would ask a closed question like what the headcount of the ward was. Now I ask questions to help me understand their situation better. I now ask, ‘what are the challenges that you are facing that I can help you with and what [are] the numbers looking like?’ ”

He added: “The aim is to try and do the best with what you have, to use it to your best ability. The mentality is to persevere.”

The new system also made Dube schedule more visits to the hospital wards, which give staff an opportunity to engage with him more.

Dube said the lean management system was first implemented in the areas of pharmacy, medical outpatients department and patient registration.

“The challenge was that the waiting time was very long for patients. At the pharmacy, for example, patients would wait more than 60 minutes. We have reduced it to now less than 30 minutes. At the patient registration, people used to wait 120 minutes, which is now a 30-minute wait.

“We saw the great improvement and decided to take the lean management system to other areas of the hospital, starting with the neonatal unit.”

Kekana also said as part of an initiative to strengthen infection prevention and control (IPC) measures in the facilities’ neonatal intensive care units, they introduced measures that include training staff on hand-washing techniques, which is ongoing. She said the hand hygiene policy had been reviewed and the staff training policy strengthened.

According to Kekana, each facility has set up a quality improvement team which daily monitors the neonatal ward’s cleanliness. The feedback from the microbiology department is presented weekly at the mortality and morbidity meetings.

Spotlight’s journalist observed that as one enters the Leratong Hospital’s neonatal unit, the security makes sure you sanitise your hands. You also walk over a carpet as you enter the unit, which reduces the germs you have on your shoes.

According to Dr Winnie Mokae, a medical manager at Leratong Hospital, nurses have to wear protective clothing and wash their hands in between going into cubicles. Another initiative is to celebrate hand-washing champions.

“We are also practising having only one nurse per cubicle.”

Mokae is an internal coach for the lean management system programme at the hospital.

The lean management system teaches workers to think and come up with solutions to their own problems, rather than to wait for the management to tell them what to do.

The nurses form part of a multi-disciplinary team, where they have doctors and specialists as managers who mentor and coach them on problem-solving in the ward. They then collectively decide what should be done. They also use status sheets as tools.

The programme teaches nurses to be accountable for what they have done. On a daily basis, the staff meets with the advisory team where they discuss problems within the ward they have encountered, which are then rated according to whether it is easy and possible to solve by the nurses versus whether it should be handed over to management. The staff will have to come up with solutions for the problems and the managers will advise.

More time in the ward

Mokae said before the lean management system was introduced, they tried to solve the problems of the ward remotely.

“We used to have meetings outside of the ward. Now we have reduced (daily) meetings held within the ward.”

They also have a microbiologist on the team, who comes in at least once a week to, for example, check on the babies and give recommendations of best practices.

Mokae says the improvement they have seen is noticeable and they’re happy about it.

“It gets rid of the anxiety to see that the infections and mortality are reduced.”

Assistant manager Gopolang Thabane began her career as a student nurse in 1993. In 1998 she became a professional nurse and in 2013 she was appointed as assistant manager.

Thabane said since they had received positive results from the lean management system, it gave people the courage to come to work.

“To see that what we are implementing is actually working, also improves staff morale.”

She said although they tell management of problems, there are problems that they can solve among themselves. She referred to the issue of absenteeism as an example.

“We can solve certain problems in the unit on our own, we know you do need relevant people to assist. We do inform them. We have the advisory team, we come together to discuss the problems we have (within the ward).”

Unit manager Henrietta Ramasolo has been the operational manager in the ward for four years. She and Mokae are part of a multi-disciplinary team which requires that they have a doctor and a specialist (such as a microbiologist) as part of the advisory team.

“Anybody that can add value can be part of the advisory team.”

“As a leader I learnt a lot. I am now able to listen to my staff — I learnt to always be humble, not for me to just solve the problems, they (the staff) must solve it.” MC