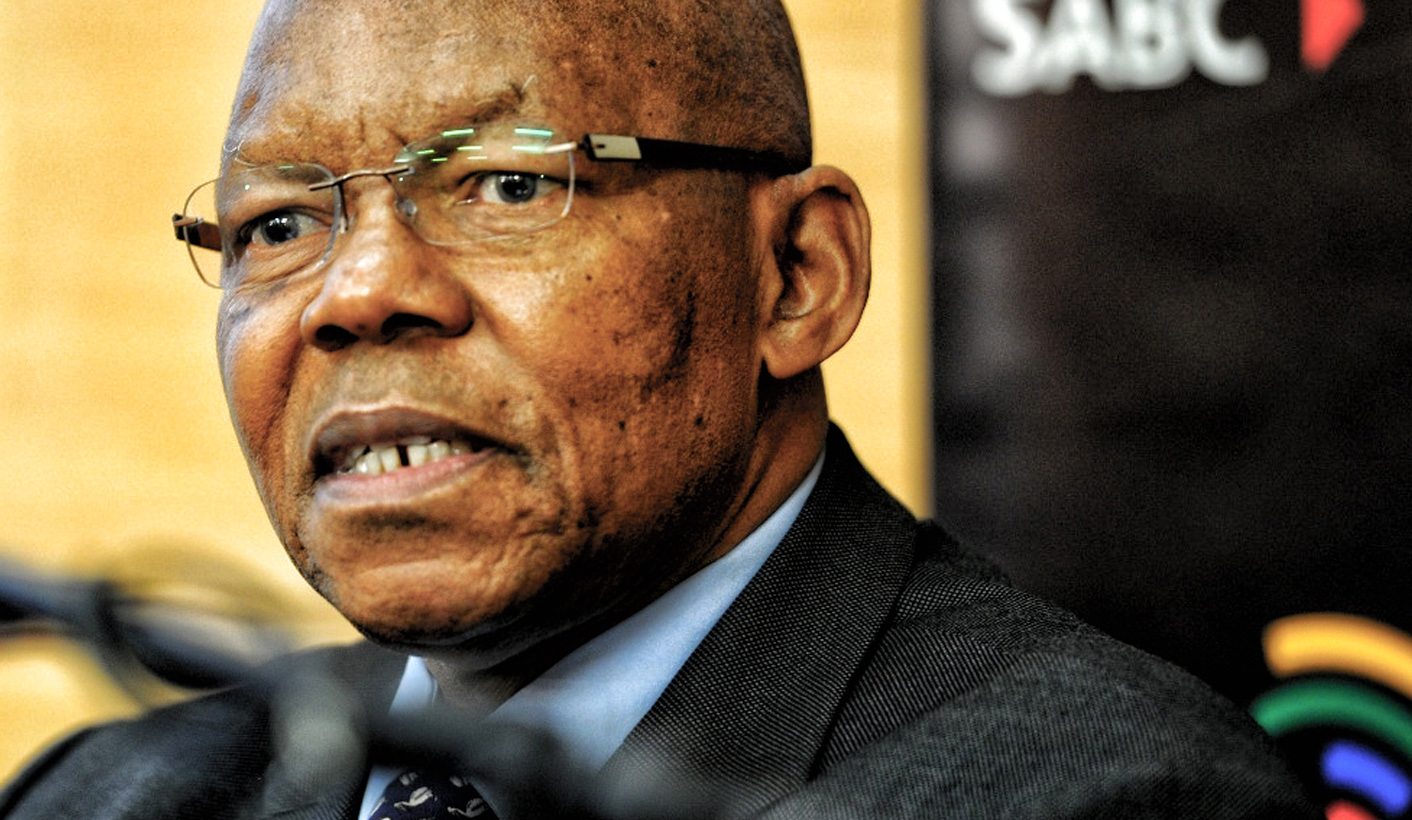 A number of former Eskom board members can expect to be served with summons in the coming weeks as the parastatal seeks to claw back cash spent on their legal fees, some of it related to state capture matters.

Key among this group is the former chairman, Dr Ben Ngubane, from whom Eskom seeks repayment of R706,000.

The country’s cash-strapped power utility confirmed that it had initiated legal proceedings to recover all of R1-million in total from Ngubane and two other former directors. It is also investigating similar payments involving several other former board members.

Ngubane, in response to questions from Daily Maverick, said he has not been served with summons as yet, but the parastatal has confirmed that its claim relates to legal fees that were allegedly irregularly paid on Ngubane’s behalf by Eskom.

While it’s a drop in the ocean of ongoing civil claims, confirmation of these proceedings against the former board members comes amid successive days of load-shedding and a spike in diesel costs as the power utility battles “wet coal” caused by sustained rain over the past week.

Ngubane was chairman of Eskom until 2017 when he resigned in the wake of the #Guptaleaks revelations and the civil claim stems from a payment Eskom had made to his lawyers.

Those legal fees had nothing to do with Eskom and related to Ngubane’s preparation for a parliamentary inquiry into the SABC where he had previously served as chairman.

Eskom first noted its intention to institute claims in its financials released in July 2019, when, in a section under “reportable irregularities,” it stated: “legal fees were paid on behalf of certain board members that were not directly related to their role as directors of Eskom”

Those former board members had resigned and Eskom stated that it has been confirmed that legal fees were paid on behalf of, “BS Ngubane, MV Pamensky and DV Naidoo.”

The report states that letters of demand and summons were in the process of being issued to recover the money. 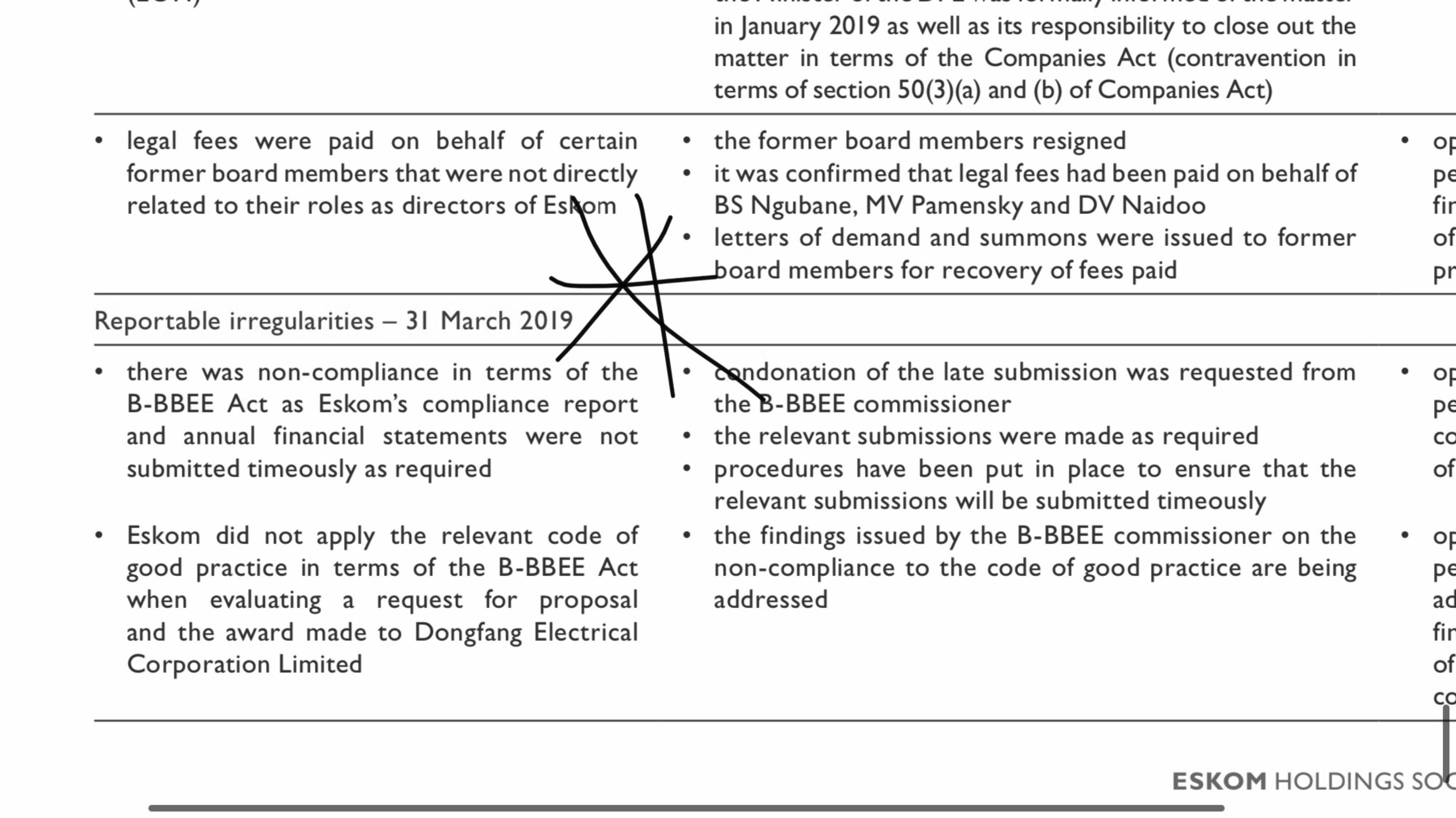 Daily Maverick previously reported on a special deal that Pamensky had struck with the parastatal, which now wants him to pay back just shy of R500,000 in respect of legal fees and security costs incurred.

Pamensky was a non-executive director at Eskom between December 2014 and November 2016 and had, during that time, simultaneously served on the board of the Gupta-owned Oakbay Resources.

Pamensky did not respond to a request for comment, but Eskom previously confirmed it had settled some of his legal bills “in error”.

The third former director against whom Eskom intends instituting a claim is Viroshini Naidoo, the wife of controversial businessman, Kuben Moodley.

Naidoo said Eskom had paid an amount of around R27,000 directly to her attorneys.

“As the amount is small, I will decide whether I intend opposing.”

Read Naidoo’s response, published verbatim, as requested by her.

As part of her written response, Naidoo said Eskom had coughed up for her legal bill, in part, because the parastatal’s former acting company secretary, Suzanne Daniels, had failed to contact her timeously to respond to the public protector’s 2017 State of Capture report.

Daniels, asked to comment, said the public protector’s request for information from Eskom had arrived with a tight deadline that had made it impossible to have individual directors present themselves within three days.

As a result, Daniels said, she was instructed by the Eskom board and the group CEO at the time to provide all the necessary information sought by the public protector.

“Given the fast turn-around time during which the public protector required us to respond, there was no time to provide the directors with a full briefing. My instruction from the CEO was to provide as comprehensive a response as possible under the circumstances.”

Daniels said she did not give the public protector any new information and merely provided the declaration of interest registers for a specific period as requested.

And, said Daniels, she had no reason to doubt the accuracy of information in the register as this had been provided by the various directors.

In the case of Naidoo, the public protector report noted that she was employed by Albatime, her husband’s company, while Pamensky, the report stated, had had business ties with the Guptas.

Meanwhile, the claim against Ngubane marks Eskom’s first direct strike against the former chairman, accused of having led a tainted board during the Gupta heydays at the parastatal.

Ngubane’s name has featured, several times, in testimony at the State Capture Commission, including by former mining minister, Ngoako Ramatlhodi.

The payment of his legal fees for the SABC matter featured during Daniels’ disciplinary hearing in 2018.

Daniels, at the time, said she believed Eskom had needed to assist Ngubane with his legal fees in order to spare the already embattled power utility further embarrassment as Ngubane – at that stage – was the “face” of Eskom.

However, the payment was authorised at a time when there were already serious question marks over Ngubane’s reputation following the release of the public protector’s State of Capture report and media reports revealing Ngubane’s business ties with Gupta kingpin, Salim Essa.

Daniels was found guilty on a charge relating to this payment at her disciplinary matter last year. She is in the process of challenging the disciplinary findings at the CCMA and said her matter is enrolled for December 13 2019. DM