SA’s Ebrahim Patel to meet US trade rep on Copyright... 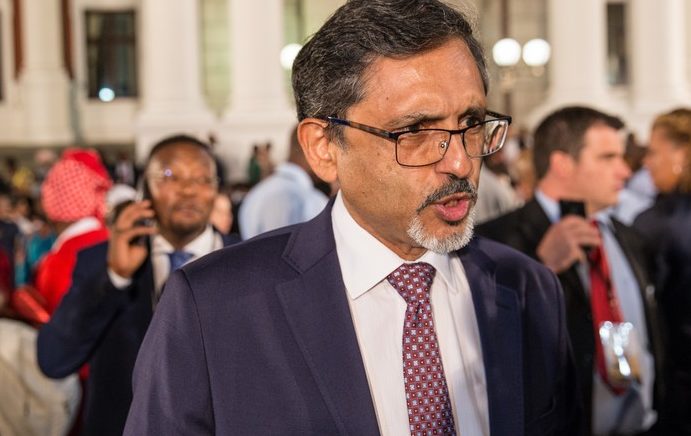 The tension arises from a US decision to review South Africa’s preferred trade status in response to a complaint filed on behalf of large US entertainment companies concerning the pending Copyright Amendment Bill.

The Minister of Trade and Industry Ebrahim Patel will be meeting with the US Trade Representative (USTR) Robert Emmet Lighthizer “soon” in the US, about the USTR’s decision to review South Africa’s eligibility for trade preferences to assist developing countries in Africa.

The Department of Trade and Industry’s spokesperson Sidwell Medupe said in response to the Maverick Citizen’s query on the matter: “We can confirm that Minister Patel will meet with the United States Trade Representative Robert Emmet Lighthizer soon and our position will be communicated after the meeting.”

Medupe would not be drawn into the specific date for the meeting, though stakeholders close to the unfolding process report that the meeting is likely to happen this week still.

The USTR’s decision to review South Africa’s preferred trade status is in response to a complaint filed on behalf of large US entertainment companies concerning the pending Copyright Amendment Bill. The US entertainment companies have complained that the bill’s fair use and other exceptions are too broad. They are also reportedly critical of the sections of the law that would give local creators greater rights to own, earn and create new works.

According to Professor Sean Flynn, Associate Director, Program on Information Justice and Intellectual Property at the American University Washington College of Law, the provisions opposed by US businesses include, for example, the reversion of copyrights back to authors after 25 years and the provisions requiring that assignments of copyright include royalty rights for creators.

ReCreate SA which is a coalition of creatives who support the Copyright Amendment Bill, have closely followed the USTR review process since the announcement was first made.

ReCreate SA’s Nontando Tusi explains: “Members of the US embassy met with a representative from the ReCreate Coalition this week to describe the USTR review process. The embassy official explained that submissions – including those from South African individuals and organisations – are due on January 17 next year and there will be a hearing on January 30. Details about that process are available.

“The official further explained that the USTR would send a delegation to meet with South African officials about the Copyright Amendment Bill some time before a decision about the complaint is made. The official encouraged South Africans to make contributions to the process.”

The USTR’s investigation into whether the Copyright Amendment Bill contravenes the provisions of the Africa Growth and Opportunity Act (AGOA) has not been well received by some US-based academics and businesses.

US-based intellectual property lawyers Sean Flynn and Jonathan Band  criticised each of the US entertainment industry objections at the Copyright Indaba held at the University of the Witwatersrand this week and have written extensively on the matter.

At the indaba, they commented, for example, that “reversion rights exist in the United States, 35 years after the transfer. And, as in the South African bill, this reversion can occur notwithstanding any agreement to the contrary.”

They further commented that the bill’s fair use right and other exceptions are modelled on US law. “The ‘broad new exceptions’ described by IIPA are no broader than current exceptions in the US.”

In a panel discussion at the Copyright Indaba, Band and Flynn said that at the heart of the Copyright Amendment Bill, which has provoked heated debate, is a set of provisions that give creators rights to earn royalties and otherwise benefit from contracts assigning their rights to labels and publishers.

“In both the US and South Africa, there is a long history of record labels and other media companies exploiting creators, especially artists of colour. Many performing artists have aged in poverty because they signed away all their rights in their youth, and media companies have denied them a fair share of the profits. There is unequal bargaining strength between sophisticated companies with their armies of lawyers and individual artists who focus on their craft. The South African bill correctly tries to level the playing field,” Flynn said.

Speakers at the Copyright Indaba also examined in detail the legal position of the current bill. Justice Zak Yacoob and advocate Jonathan Berger explained to the audience of local and international intellectual property stakeholders that the president does not have a general veto over legislation and may only send it back to Parliament for consideration given constitutional reservations.

Flynn has further advised that the USTR’s pressure may violate the World Trade Organisation’s (WTO) rules for generalised systems of preferences, known as GSP programmes. He explained:

“Although GSP programmes are unilaterally granted, they cannot be unilaterally denied for reasons that benefit the grantor country. GSP programmes must be based on ‘generalised’ and ‘non-reciprocal’ criteria that are based on the development interests of the grantee, not the grantor. If the USTR removed AGOA preferences from South Africa based on criteria (such as adopting fair use) that clearly do not violate multilateral standards, South Africa could challenge the action in the WTO under the GSP Enabling Clause.”

While the attention of intellectual property stakeholders has now turned to the USTR’s review currently underway, it remains unclear when the bill will become law despite it landing in the president’s in-tray for his signature months ago.

The National Assembly passed the Copyright Amendment Bill in December last year and the National Council of Provinces passed it in March. Once President Cyril Ramaphosa signs the bill, it becomes law and relevant regulations will follow.

The president’s delay in signing the bill has been a source of frustration for both supporters and critics of the bill.

Although there is no timeframe within which the president must make a decision on the bill, the Constitution requires that he make a decision within a reasonable period of time, and stakeholders have argued, including former constitutional judge Justice Zak Yacoob, that the president has had more than a reasonable period of time to consider the bill. MC