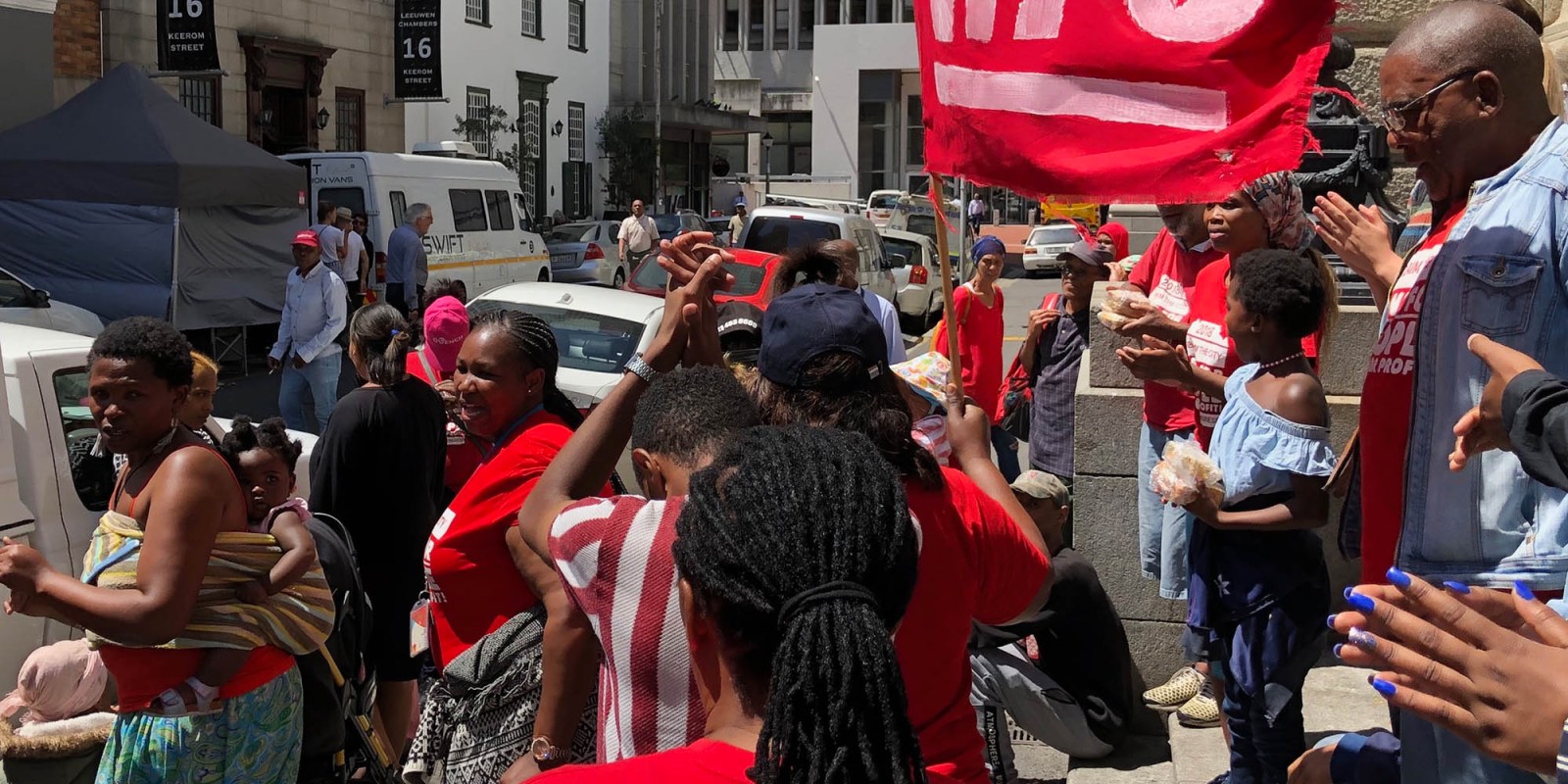 Members of Reclaim the City and Ndifuna Ukwazi Law Centre gather outside the Western Cape High Court during the fourth day of hearings in the Tafelberg case. (Photo: Madison Yauger)

If the Phyllis Jowell Jewish Day School acquires the Tafelberg site, 40 affordable housing units will be built on the property as well as a school, advocate Paul Farlam, representing the school, told the Western Cape High Court today.

The future of the site, formerly the Tafelberg School, has been debated in the court for four days now, with the City of Cape Town, the Western Cape government and the Phyllis Jowell Jewish Day School arguing in favour of its sale to the school. Housing social movement Reclaim the City and the Ndifuna Ukwazi Law Centre have argued that it should be used for social housing. The national Minister of Human Settlements is opposing the provincial government decision to sell the property without adequate consultation from the national government.

He said the entire complex — the gardens, the buildings and the trees — had been given provincial heritage status and declared a national monument. Some of the school buildings dated back to 1899.

Judge Patrick Gamble questioned how the school could say the property would work for affordable housing units, but not social housing.

Social housing programmes are mainly designed for households earning between R3,500 and R7,500 a month.

Farlam said that it would not be financially viable to produce social housing on the site because social housing had certain parameters, including basic income levels. But the Day School would flatten the mansions and build affordable housing units, open to low-income earners who work on or around the property. People who are currently occupying the old Woodstock Hospital and Helen Bowden Nurses Home silently shook their heads in the gallery.

Farlam said the province had found the property was suboptimal for social housing and the court should proceed on that basis.

He added that the Day School needed to move from its current site which was much too small.

“Conditions have been imposed limiting the number of students and there’s not enough parking.”

He said there was a reason the school’s offer had come in at “R27.7-million over market price”.

Farlam said there was a need for an orthodox Jewish school in the area to serve a different community from the other Jewish school nearby, Herzlia Weizmann Primary School.

Farlam assured Judge Gamble that there was no desire to be exclusive.

“This is something that is good for the site, good for Sea Point and good for the city. It’s also good for the Jewish community, but it’s not exclusive to that,” said Farlam.

Judge Gamble said a public participation process should have occurred before making the decision to sell to the Day School.

Advocate Ismail Jamie, representing the national Department of Human Settlements, responded to the province’s argument on Wednesday, that the court should defer to the government in this matter:

“Deference is only shown by the courts toward lawful conduct,” said Jamie.

He also addressed criticism from the province that the activist organisations and national government were focusing their concern not on the poorest of the poor, but those who seek social housing. Jamie said that the obligation of government is to all people, and once again cited the province’s “irrational and unreasonable approach to the disposal of Tafelberg”.

The case will conclude on Friday with a response from the Social Housing Regulatory Authority and closing statements from the Ndifuna Ukwazi Law Centre and Reclaim the City. DM